The Confiserie Zum Süssen Eck In Vienna | The Living Daylights

Hey all, as you may have heard on the podcast I’m back from Vienna. I semi thought about proposing on the Wiener Riesenrad Ferris wheel. I got rebuffed up Piz Gloria last year and thought it could be a decent running theme to have marriage proposals turned down at every Bond location. But I bottled it. Plus I wasn’t sure I wanted to propose on anything that had the word wiener on it. So first stop.

Michael the owner and I

The place where James and Saunders did their sniper stakeout after leaving the Volksoper over the road. The owner Michael is an unflinchingly accommodating soul, allowing me to take pictures and answering my questions. I emailed him after and he was even kind enough to answer some follow questions. I thought it best to put those in an interview below. Please understand that Michael’s first language is not English, but I wanted for you to get the flavour of the man so have left his answers in verbatim. 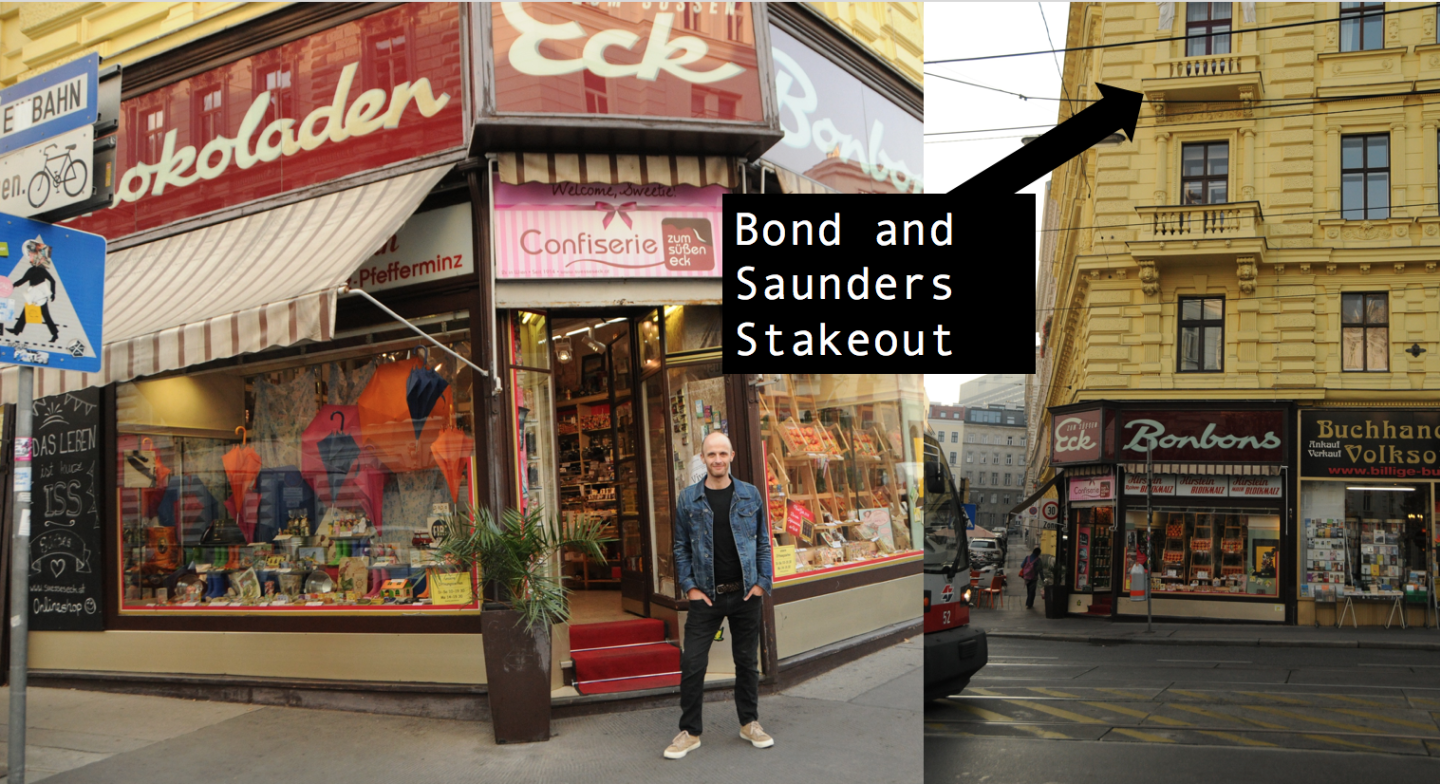 HOW MANY PEOPLE COME TO YOUR STORE AND ASK ABOUT THE LIVING DAYLIGHTS? IS IT A DAILY THING?

The Living Daylight is in a small shop window corner all the time present and a lot of customers see it and then ask. The frequency of asking about the film depends also the presence in the programs of the public TV-Stations, e.g. if, Living Daylights is on program we have the next 2 weeks a lot of questions.

WERE YOU THE OWNER OF THE SHOP DURING THE TIME THE FILM WAS BEING MADE?

No, the shop was not ours at these time, but we have followed the matter.

YOU HAVE THOSE PICTURES OF TIMOTHY DALTON IN THE WINDOW, DID YOU TAKE THOSE? ARE THEY THE ONLY COPIES?

My aunt, the pre-owner, has taken those with the agreement of Timothy Dalton. As they are private photos they are the only copies. 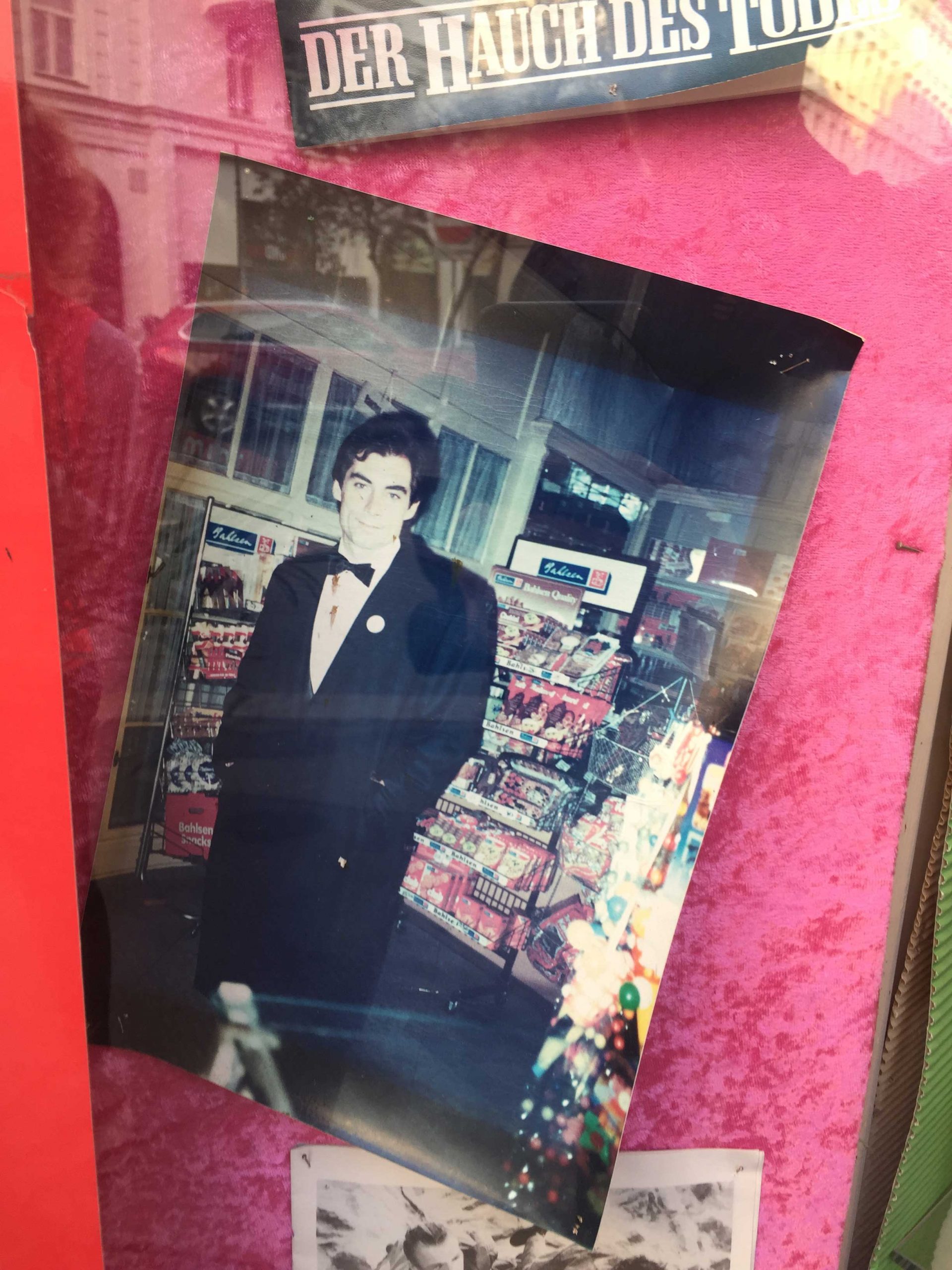 THE SHOP WAS A BOOK STORE PREVIOUSLY CORRECT? HOW DID IT GET TO BECOME A CONFECTIONARY STORE?

WERE YOU THERE WHEN THEY FILMED THE SCENES AND HOW MUCH OF THE STORE WAS USED IN THE FILM?

No I was not there myself but my aunt, the pre-owner told me all the details. The scene was a very short one.

JB was entering the, bookshop and then going upstairs on a spiral staircase, and then shooting from the balcony to the theatre. We neither have staircases nor a second floor, so the onliest sequence was when JB entered to the shop.

THE BALCONY ABOVE THE STORE WHERE SAUNDERS AND BOND HAD THEIR STAKEOUT, HAVE YOU BEEN ON THAT BALCONY?

Yes I have been there, in order to check if the dimensions are right. And they are.

FINALLY, APART FROM THE LIVING DAYLIGHTS WHAT IS YOUR FAVOURITE JAMES BOND FILM?

My personal favourite is Die Another Day.

You can visit Michael’s store, order some pure Viennese chocolate. I stocked up on a load for Christmas gifts as they make their own chocolate and it comes with pictures of the Ferris Wheel on the wrapper. 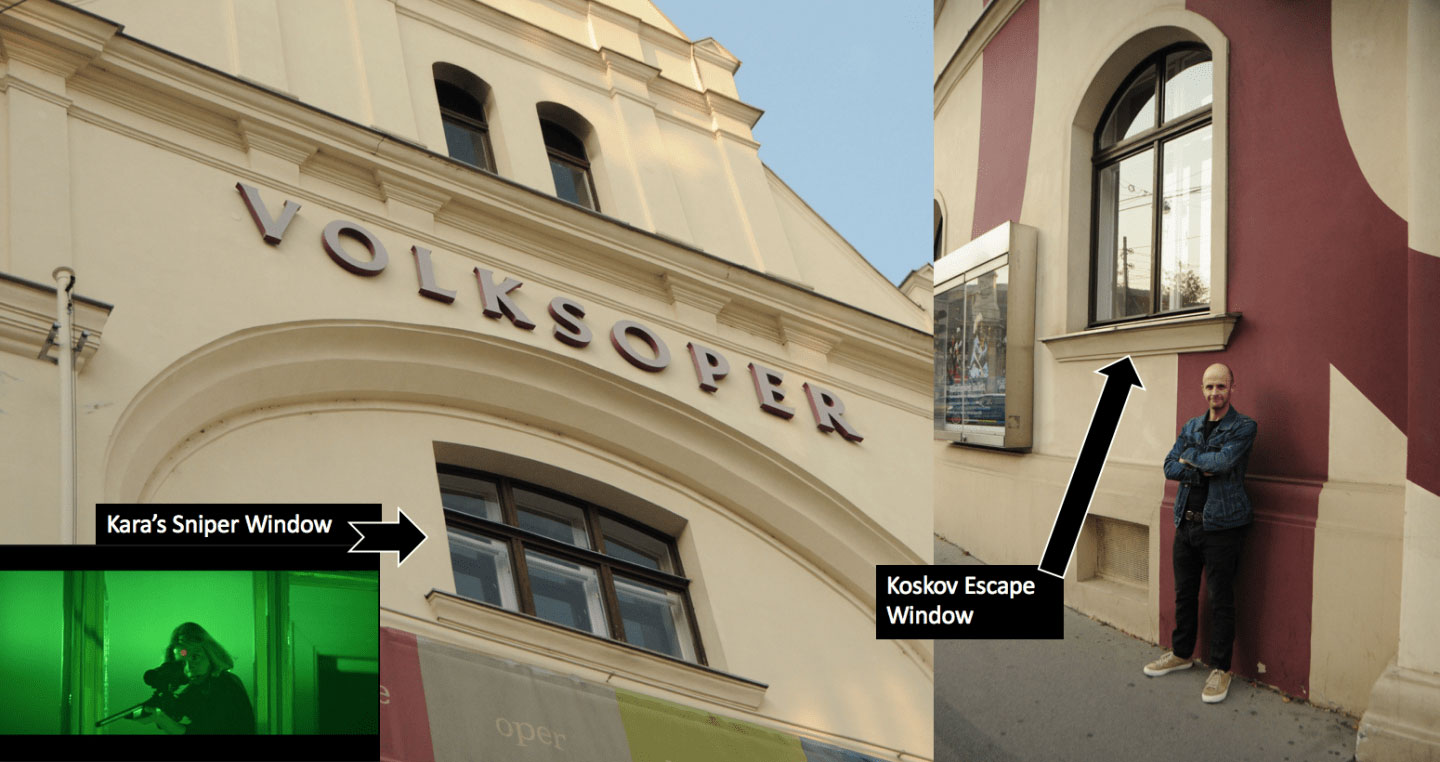 LAST STOP OF THE DAY IS THE VOLKSOPER

Straight over the road no less. You can go to the window from which Koskov made his escape. I asked if I could go up to the window and I was asked to buy a ticket for a later show. Which was fine, we watched a nutty musical based on the life of Vivaldi. The interiors were shot in a different venue  They are the Sofiensaal, (not pictured) also in Vienna. Thank you to Marc Rohlig from Hunting Bond for that information. The window on the inside is facing a bar, and in the bottom right picture you can see what kind of view Kara would have had. 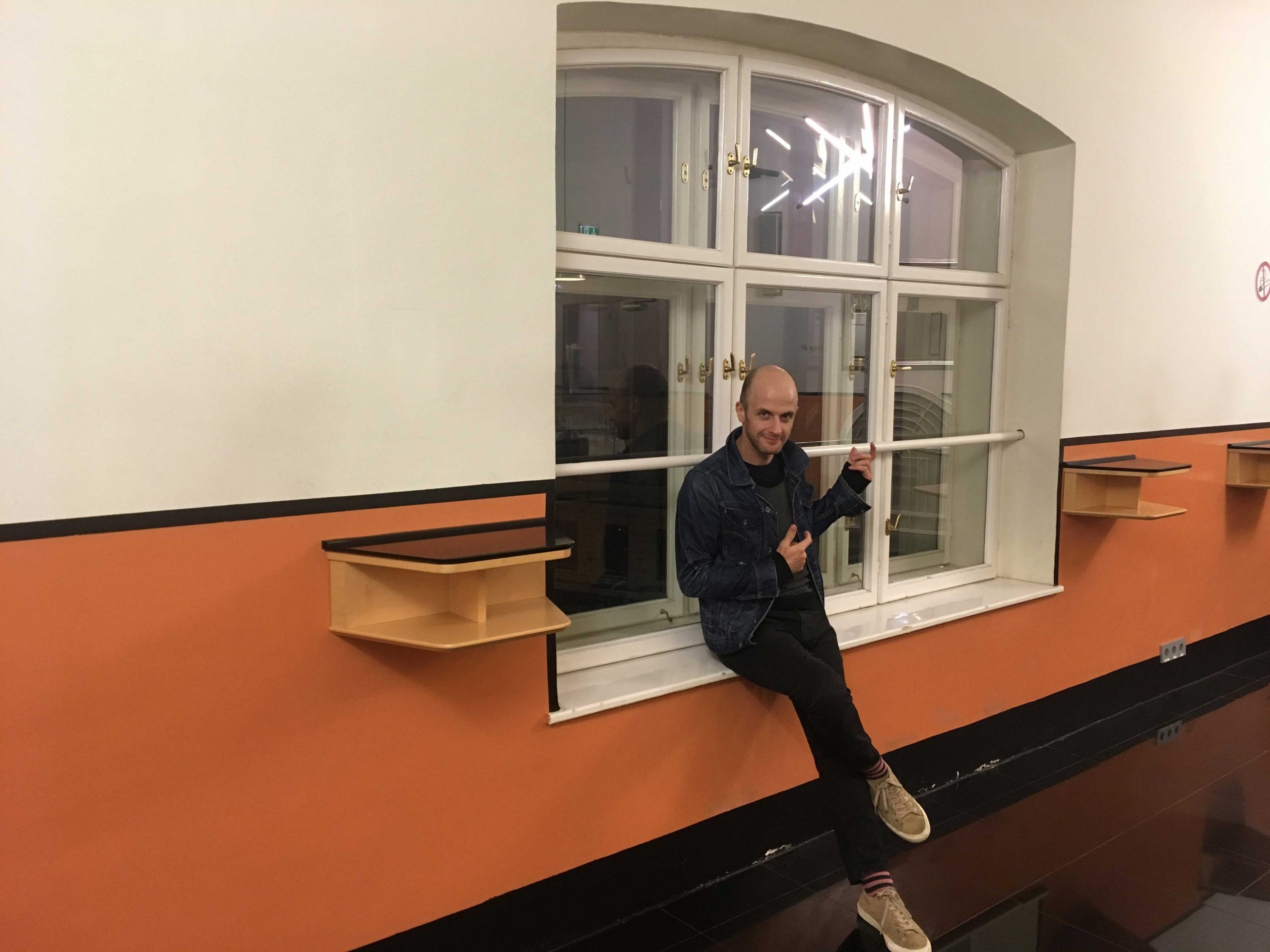 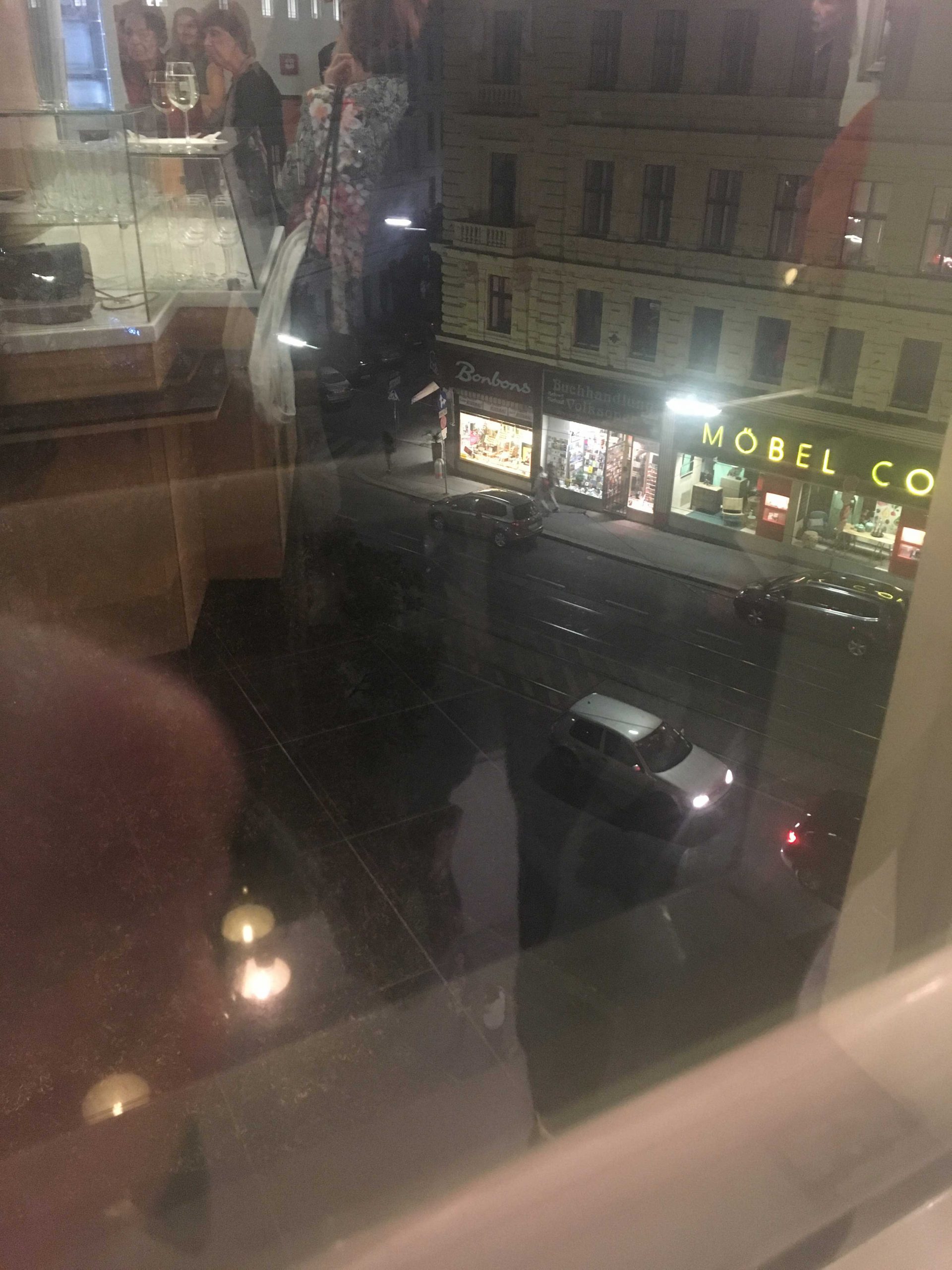 The view the sniper would have had

Some quick shots of what it was like going up the ferris wheel as featured in The Living Daylights. The Wiener Riesenrad, is a 64.75-metre tall Ferris wheel at the entrance of the Prater amusement park in Leopoldstadt. 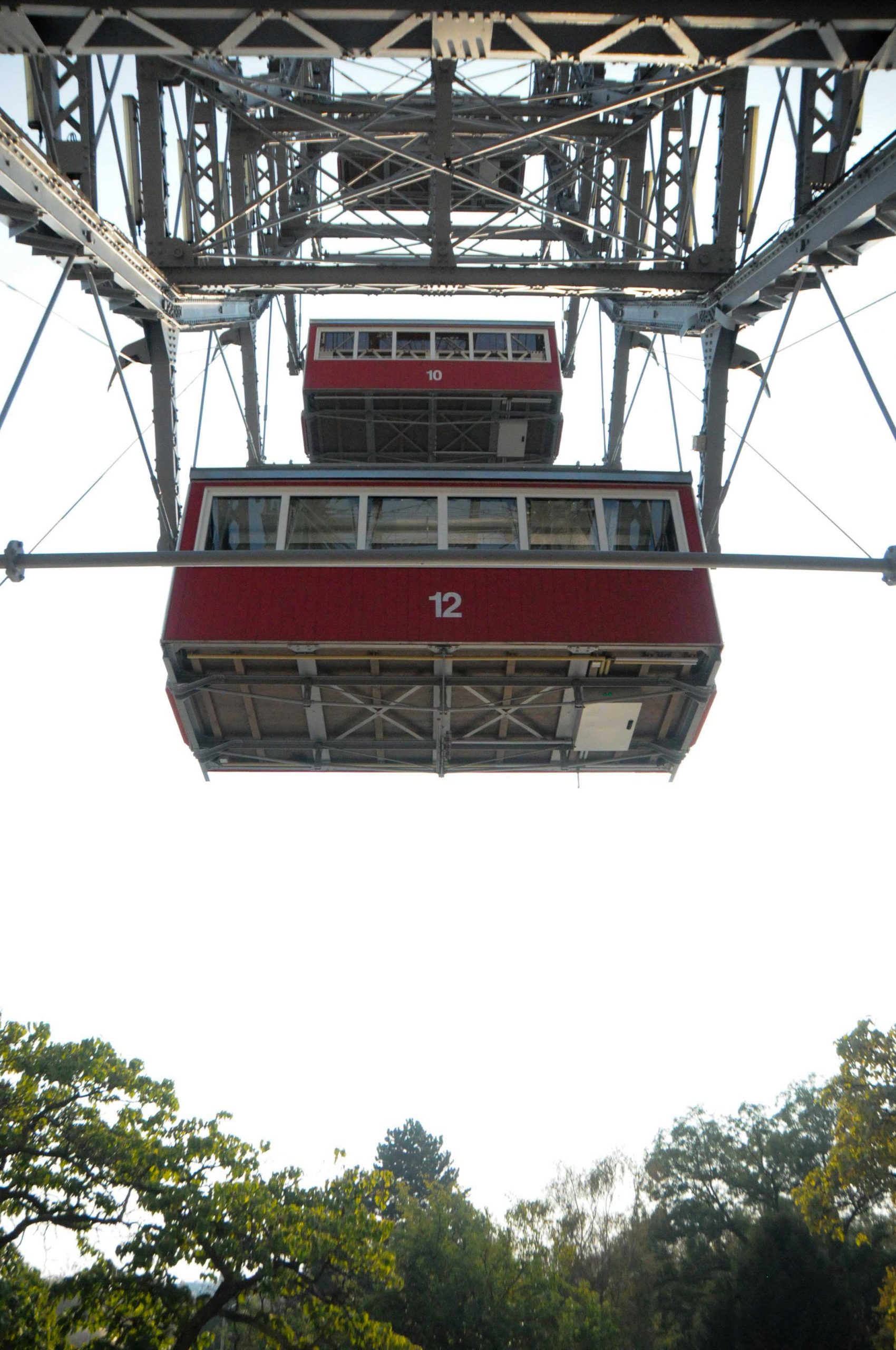 You’ll be wanting to get in carriage number 10, the one Kara and Bond used. You can eat in some of the carriages as you can see in the pictures. You can book tables here. 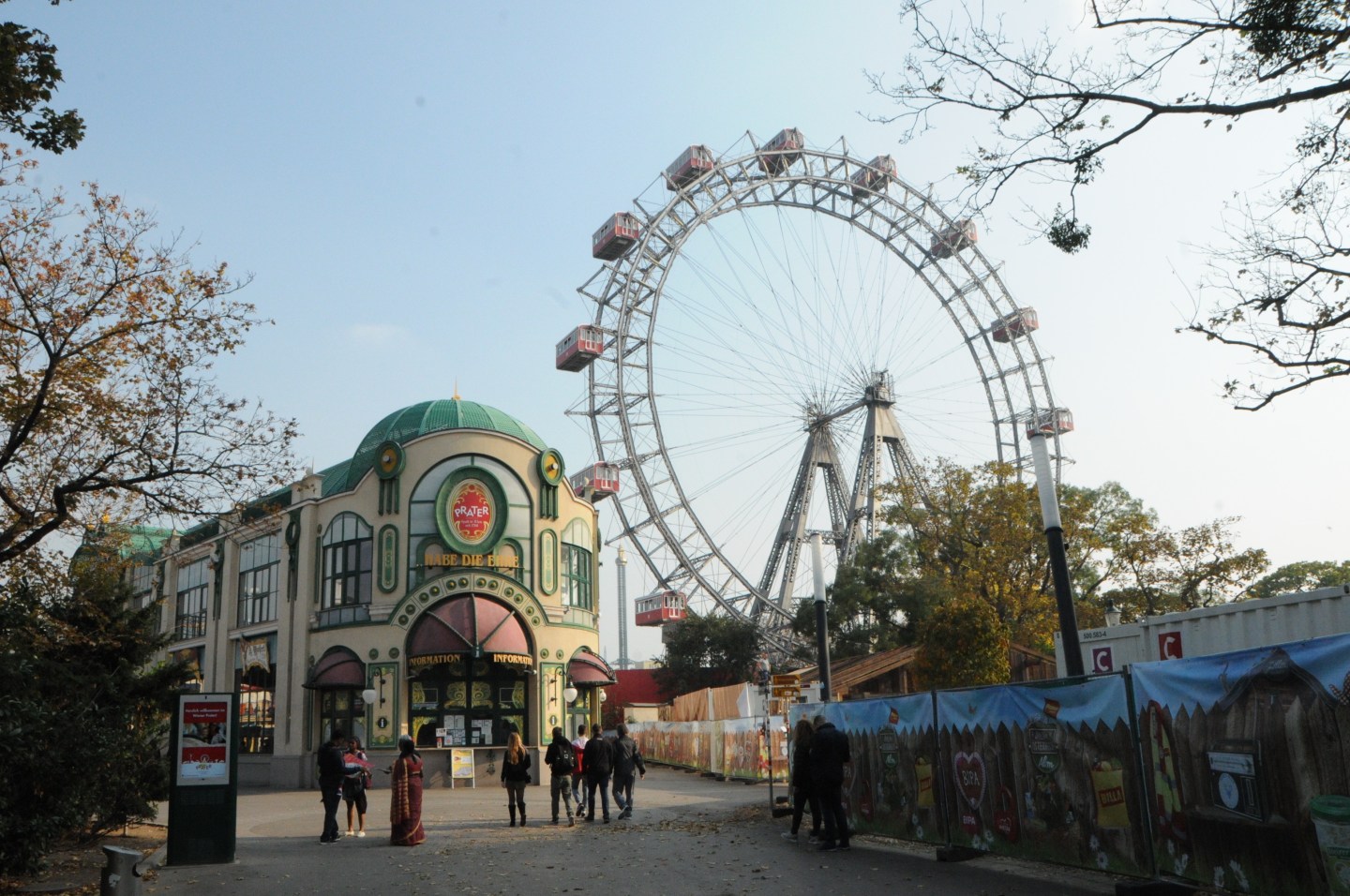 *disclaimer – this is a repurposed travel blog from Human Research my old blog. Sorry for the lack of Bond clothing on this one.

The Tuxedo Dalton wore in the sniper scene is currently on Auction through Prop Store. Thanks to the diligence of my co-author Matt Spaiser we know that this tuxedo does not come with a velcro strap storm collar as seen in the film. Additional info can be seen through the listing.

Learn more about the style of James Bond and our interview with The Living Daylight’s costume designer Emma Porteous in the book From Tailors With Love: An Evolution of Menswear Through the Bond Films, available on Amazon.

The tuxedo sold for 9k GBP at the auction. This is not the first time it’s come up for auction. Originally this iconic tuxedo was listed at Bonhams in 2008. The original was donated by Dalton to a charity evening, ‘Who Cares Wins’, held at the The Mill, Sonning, Berkshire, 24th June 1990. The suit was a raffle prize, won by the vendor’s parents-in-law. 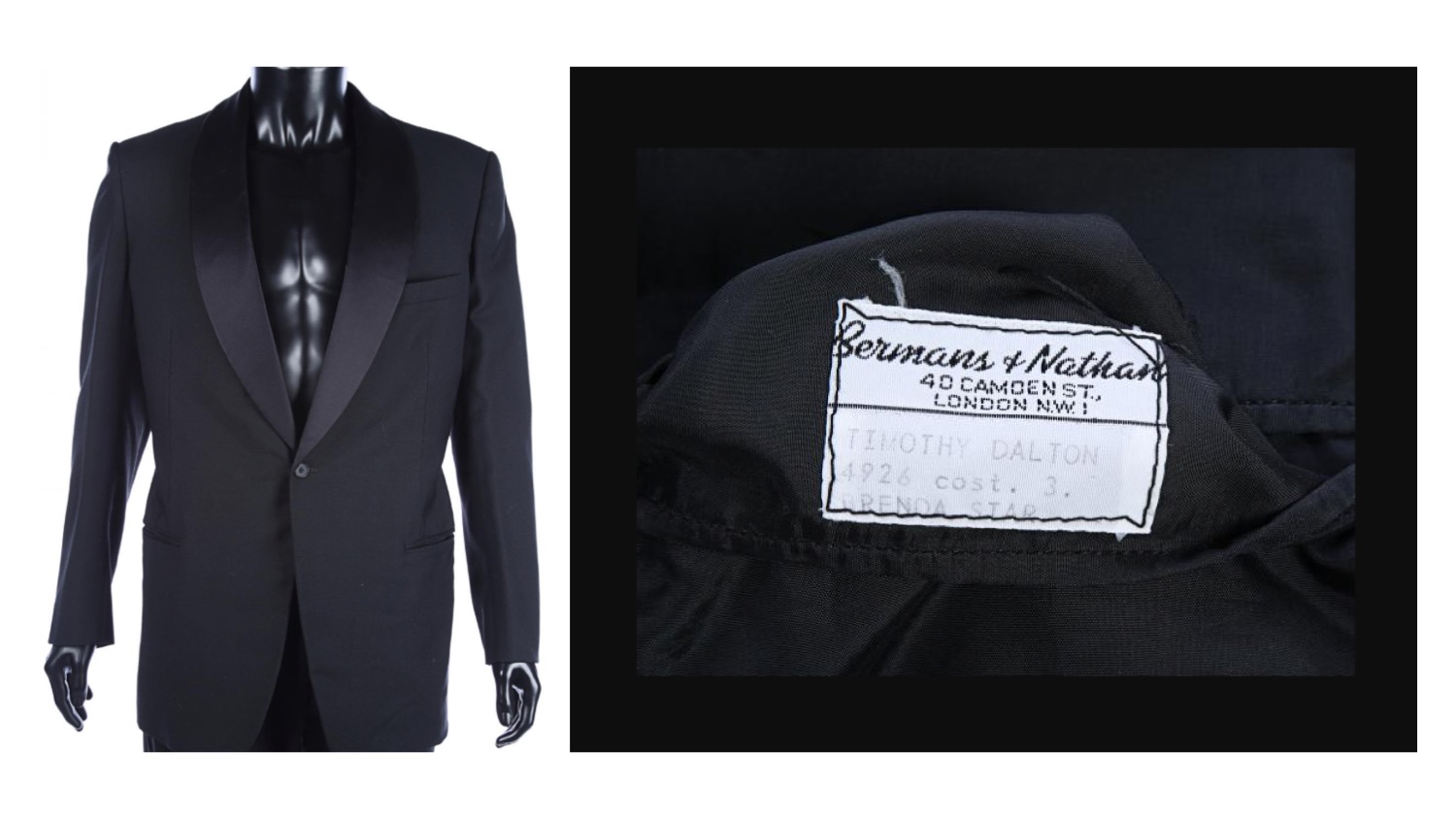