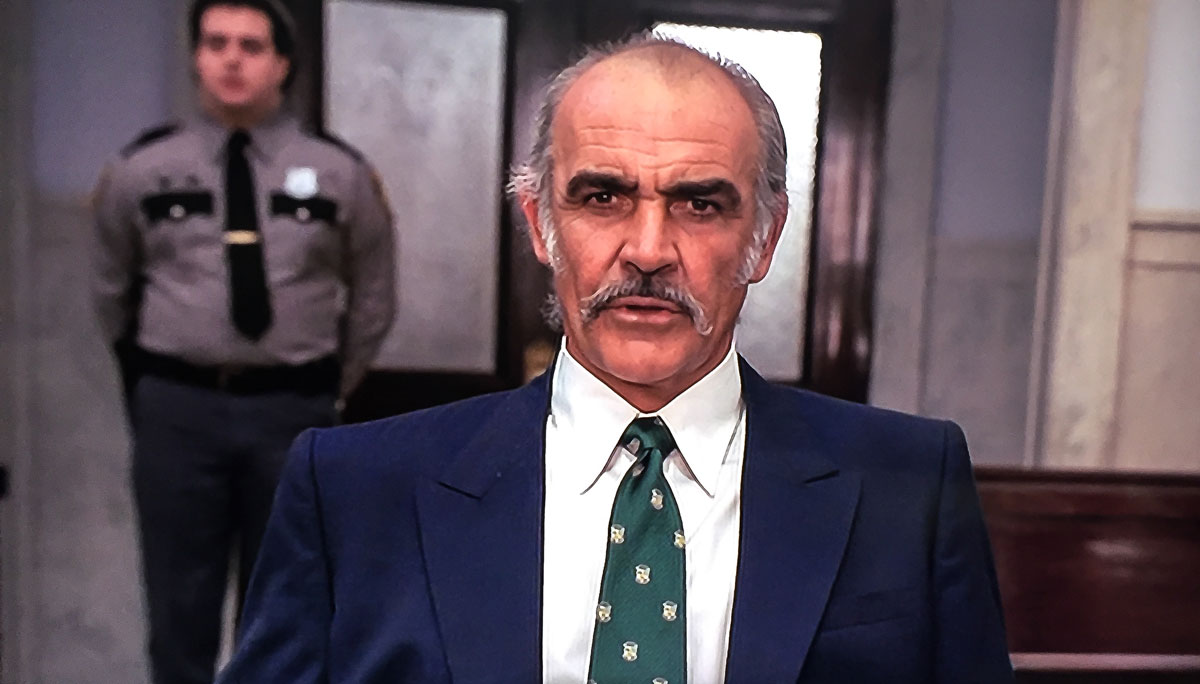 The costumes for Family Business (1989) were designed by Ann Roth. Who is still alive at the time of writing at the age of 83. She did Midnight Cowboy, The English Patient Birdcage and many other films that I should have seen but didn’t because the DVD jacket was ‘meh’. 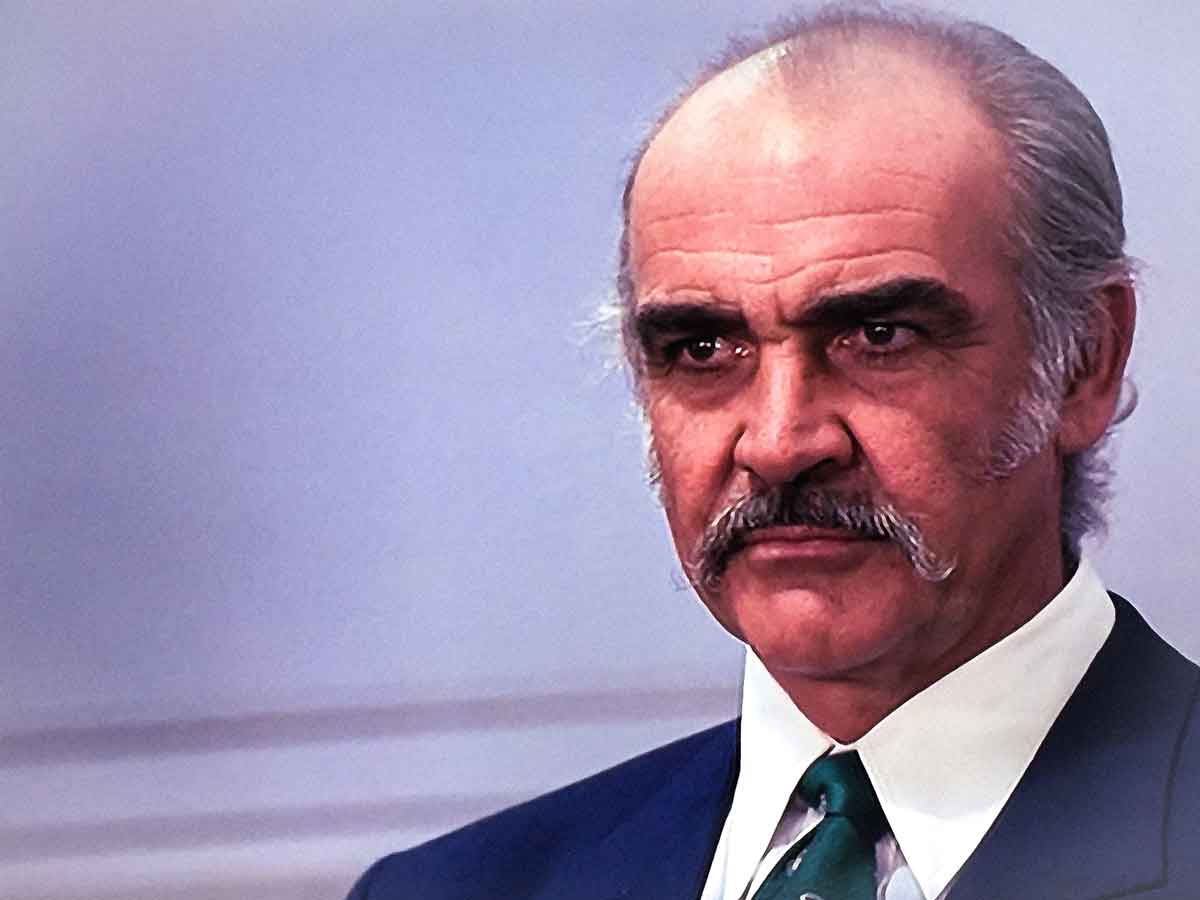 Connery wears a lot of houndstooth throughout. A black and white jacket that he layers well over a red v-neck jumper. I’m guessing the late 80s and early 90s the pattern ties were king. But not good patterns like a geometric or a chevron. Although I know nothing about ties so I should really cool my jets here. 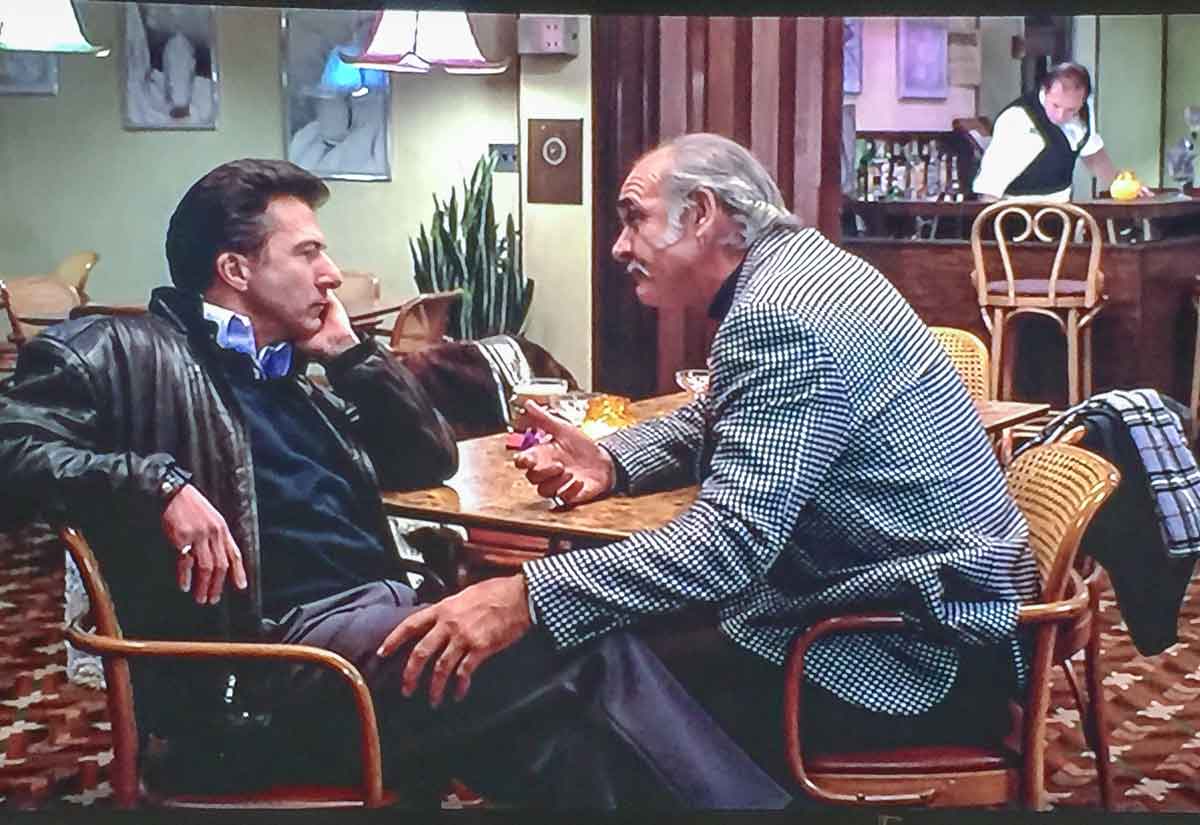 I took these photos on an iPhone 6 or 7, can’t remember. It’s not a Blu-Ray so I did what I could. I’ve compressed them for load speed but I have the full res versions on Pinterest. 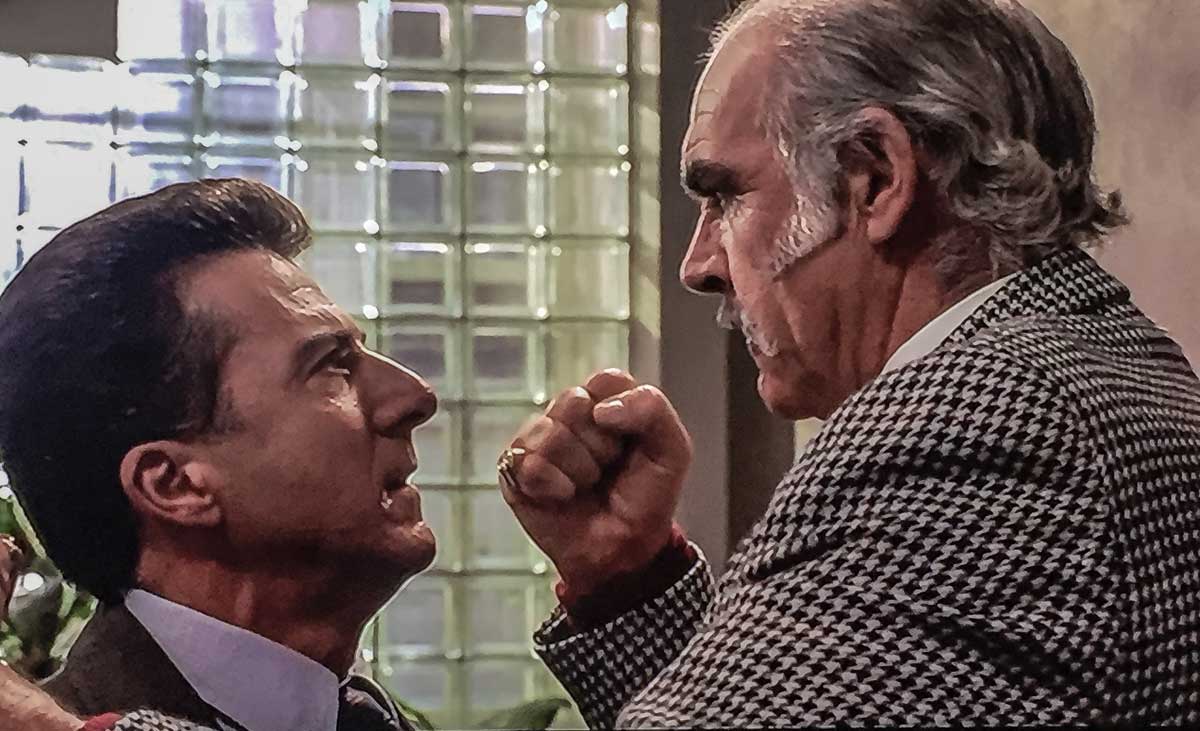 The court scene is when Connery’s wardrobe really has its time in the sun. It looks to be the same one he wears to the dinner below. All of these scenes should have been slightly better, but they’re not.

The film in general has decent moments, Connery does a lot of singing which is not a great thing, and you really want to tell Broderick to stop being a twat to his Dad. 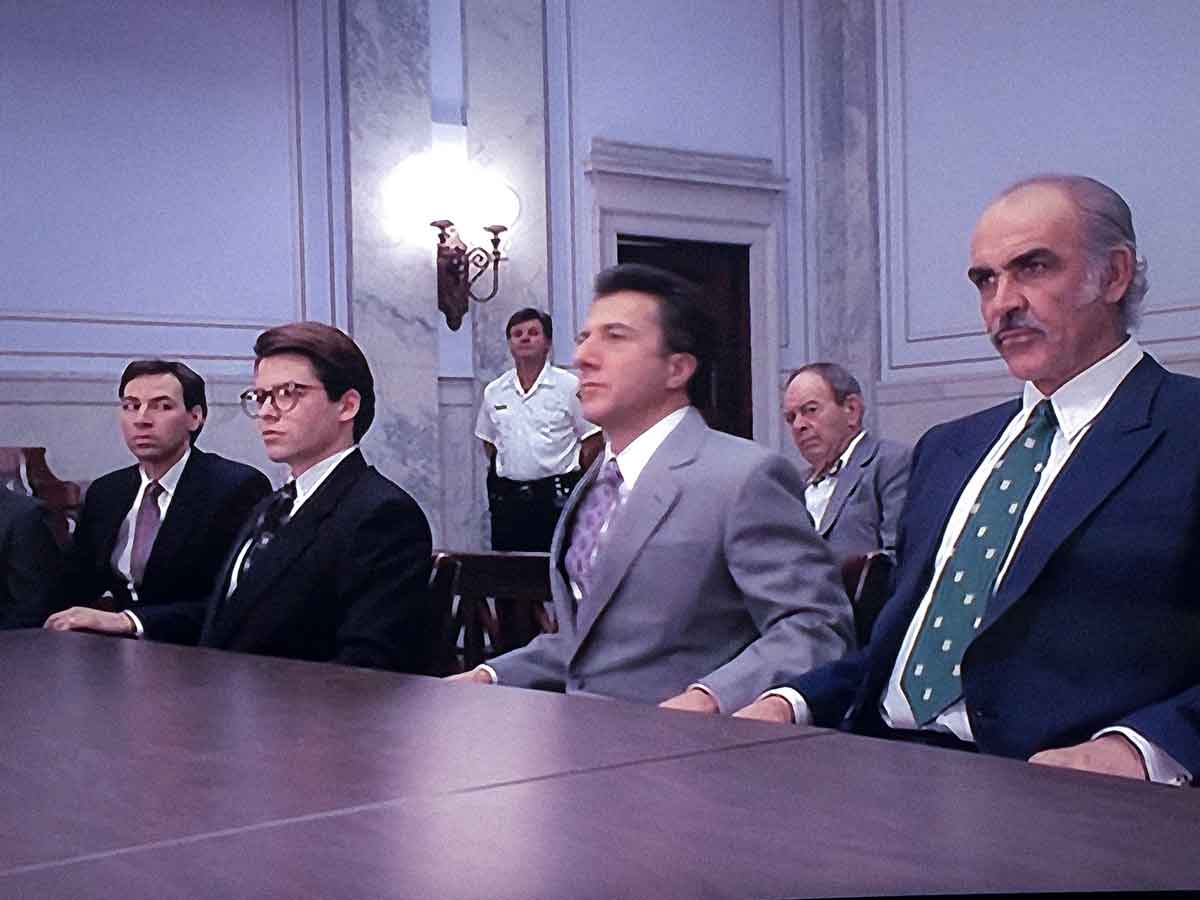 Here is some info I pulled from IMDB.

Connery is only 9 years older than Hoffman in this, and only 12 years older than Ford in Last Crusade. Apparently Connery had full faith in the director Sidney Lumet to make ‘the magic happen’. Lumet told Rolling Stone, ‘We thought we’d need to put Sean in the Make-Up chair for hours. Luckily it was fine, he naturally looks old as f*ck’.

Hearing this is a movie about ‘Generations’ Connery spent weeks binge watching old episodes of Family Fortunes with Bob Monkhouse. He later admitted to Playboy magazine, that it was an ‘exquisite waste of time’. 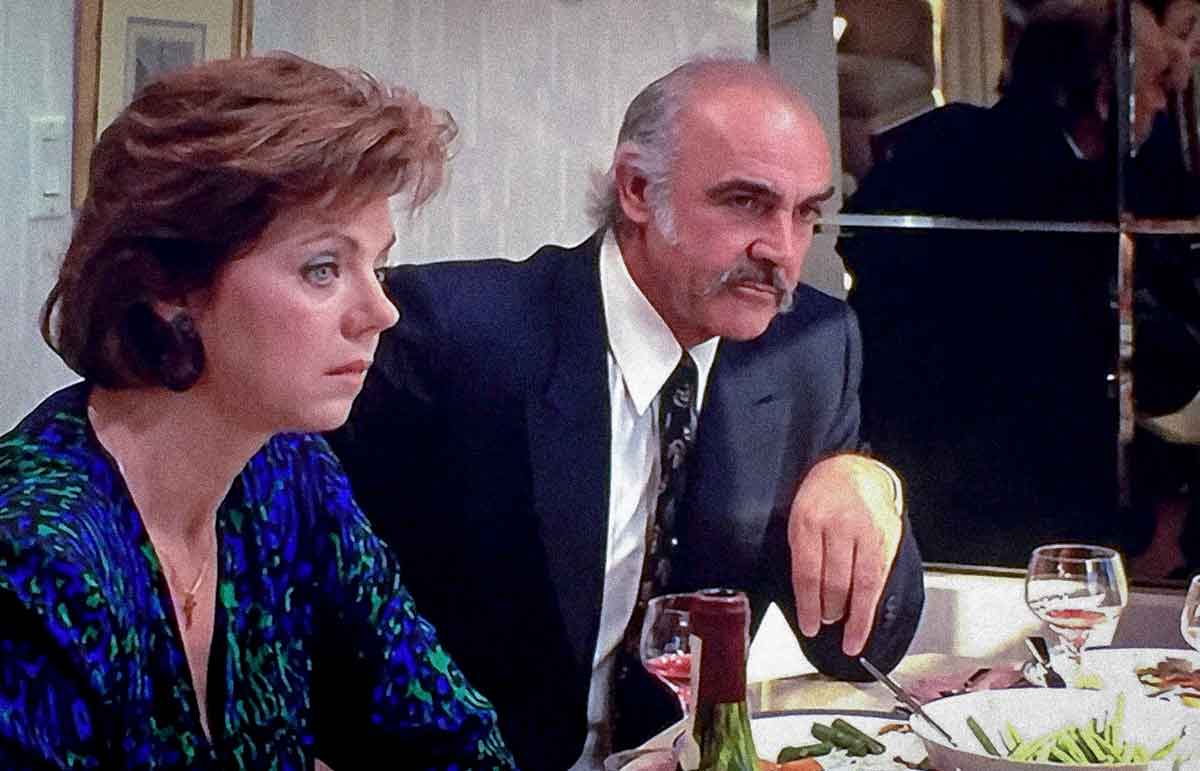 When Connery enters the court room one of the jurors asks him to sign a copy of his Dr NO poster. 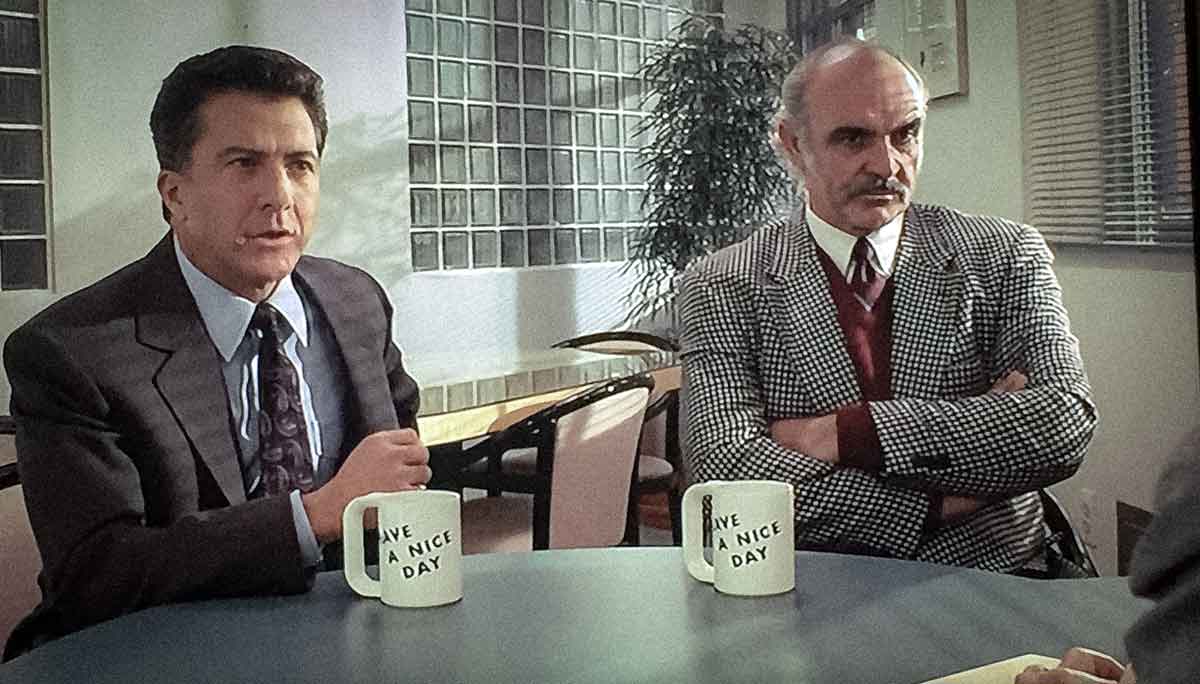 I really enjoyed seeing the Have A Nice Day Mugs in Family Business. Not only did it enhance the scene immensely but since I own the patent for Have A Nice Day, I sued the films producers over breach of copyright and won a tidy 20 pound settlement out of court. (John, Lowestoft)

I love films that take place around Christmas. It makes me wonder why there hasn’t been a Bond Christmas movie? We could finally get to see slip Moneypenny one at the office party. Or M, or Tanner. Maybe all of them. It would certainly help me to invest in the peripheral characters more. (Hans, Isle of Dogs) 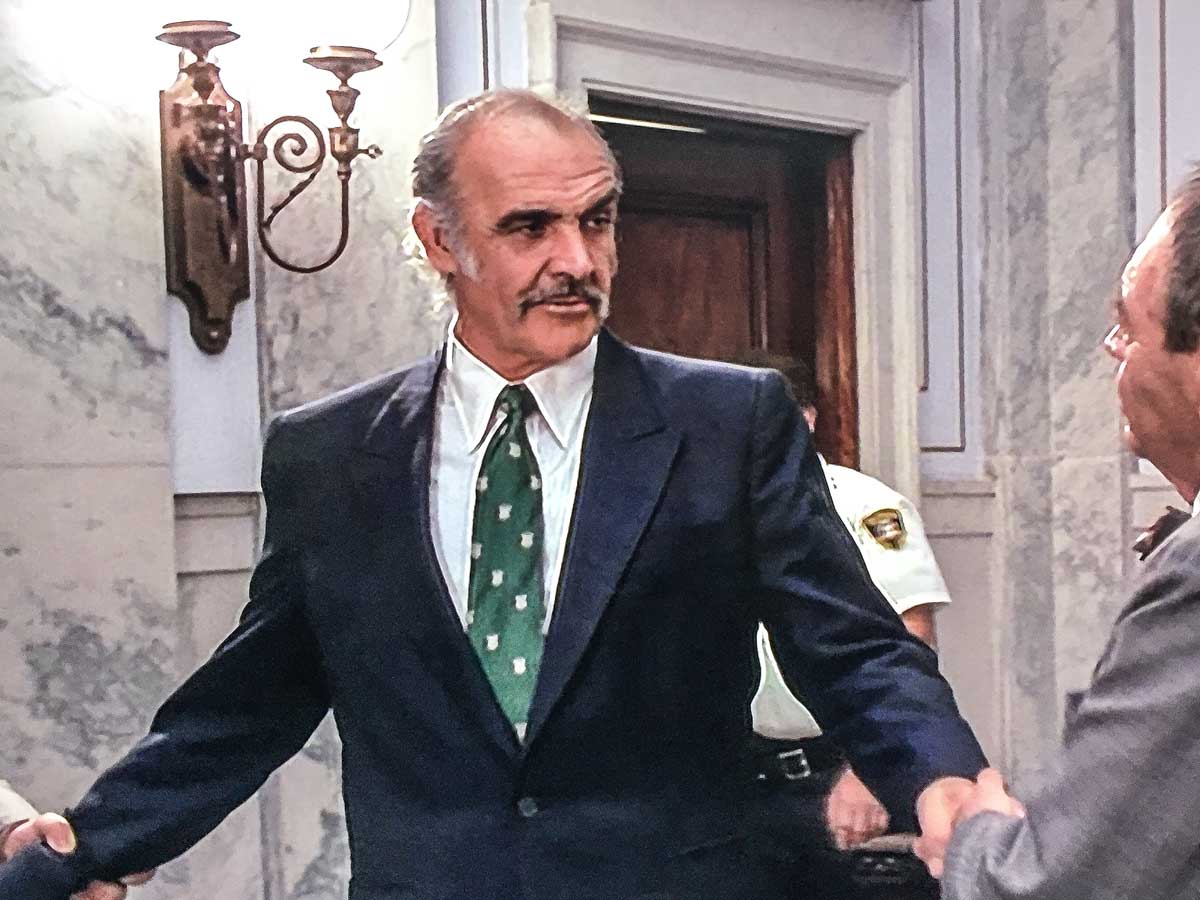 It’s a Heist with no Heat

Apparently the gunfight scene in Heat was so good they show it to the people training in the military. I can’t think of a single reason why they’d show this film to the military, or anyone else come to think of it. (Ralph, NYC) 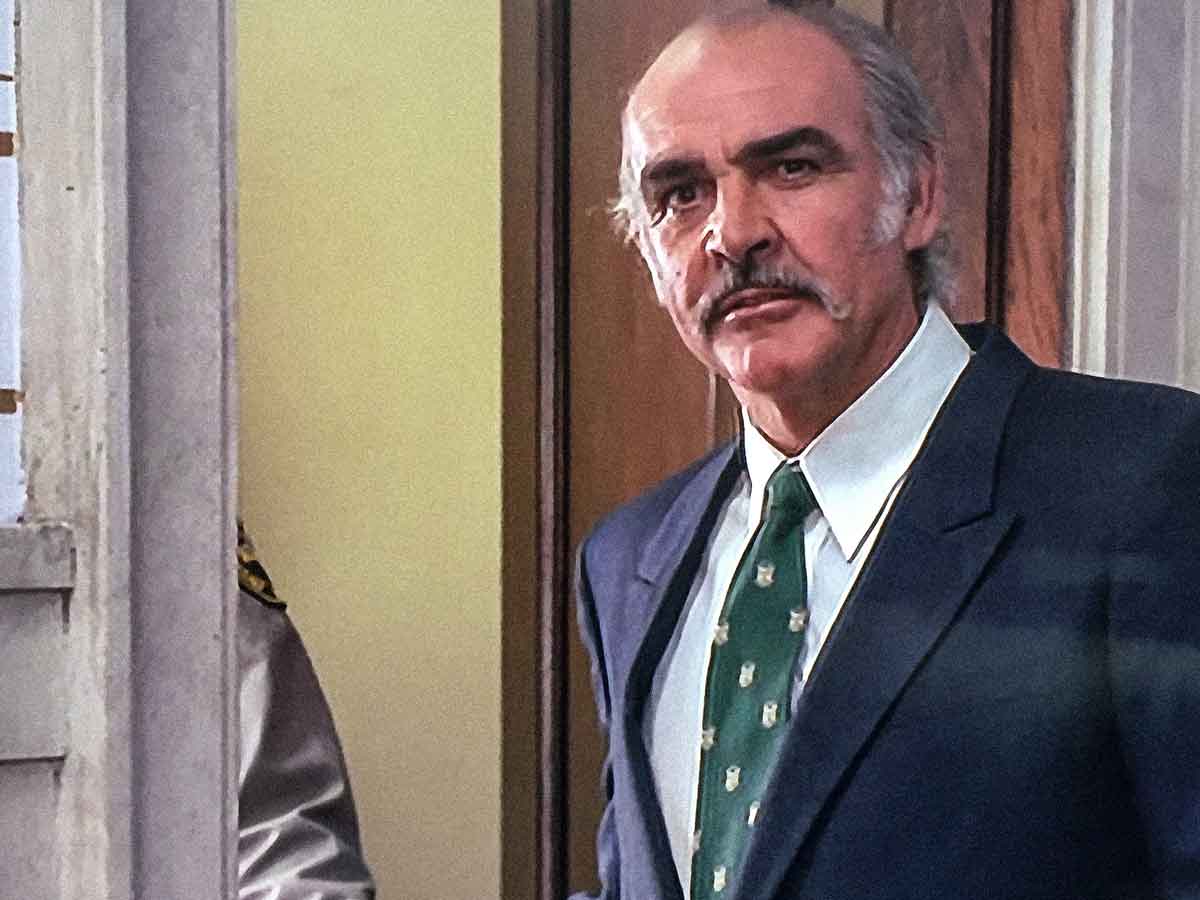 Connery being taken to jail in Family Business

I’m not a fan of Connery, Hoffman or Broderick. But I do really like the guy who plays Strickland from Back to the Future. He turns up in this, but sadly, he is given too little to do and cannot save a dismal script. (Jules, Daventree)

I can completely empathise with Hoffman at the end and he’s chasing the nurses carrying Connery in a gurney on the way to the morgue. I missed my Amazon delivery by seconds the other day and chased my driver all the way down my street. It was equally as emotional and I’m sure any onlookers would have been moved to tears. (Phil, Melbourne) 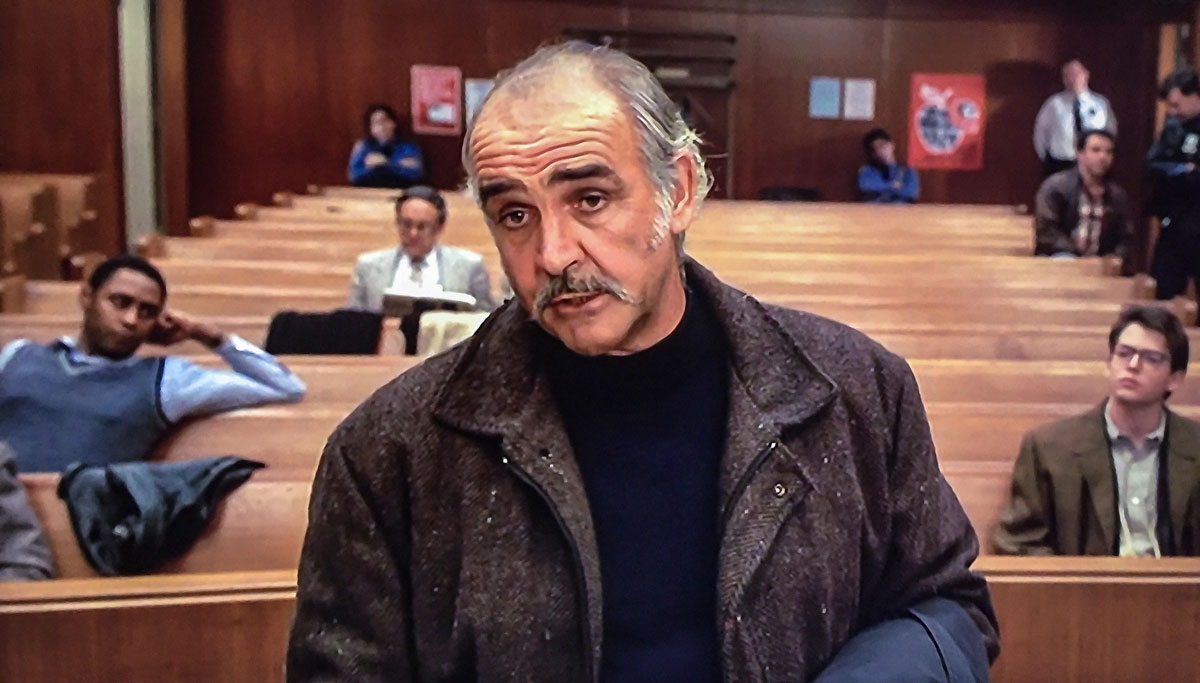 None of the trivia, goofs or user reviews are real, they are merely made up to amuse so don’t write in and complain and please don’t sue.

You can view these articles first on our newsletter.

I recommend the Sean Connery Biography by Christopher Bray, which I have. Family Business is available to buy on Amazon in a Sean Connery Box Set.