This isn’t a typical Bond jacket. 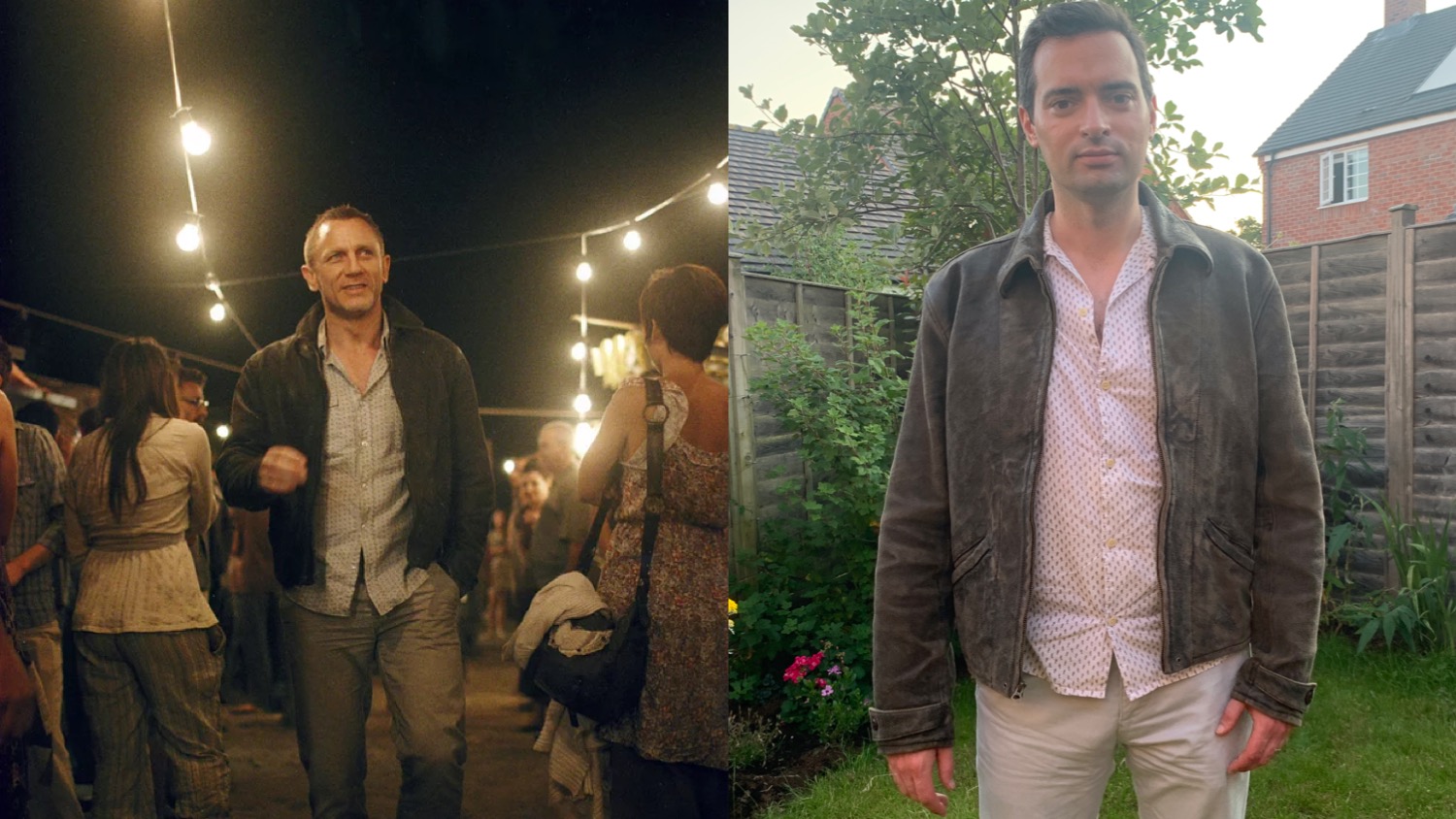 We first see this jacket Bond is in Turkey, walking on the beach towards a bar. This following a self-imposed 3-month exile from being shot in Istanbul in the pre title credits of Skyfall.

Bond is wearing the jacket the next morning, still in the bar, wear he sees the news that the MI6 building had been attacked. He then travels back to London and breaks into M’s house and her whisky! The next day, still in the same outfit Tanner takes him to the MI6 bunker to start his evaluation. 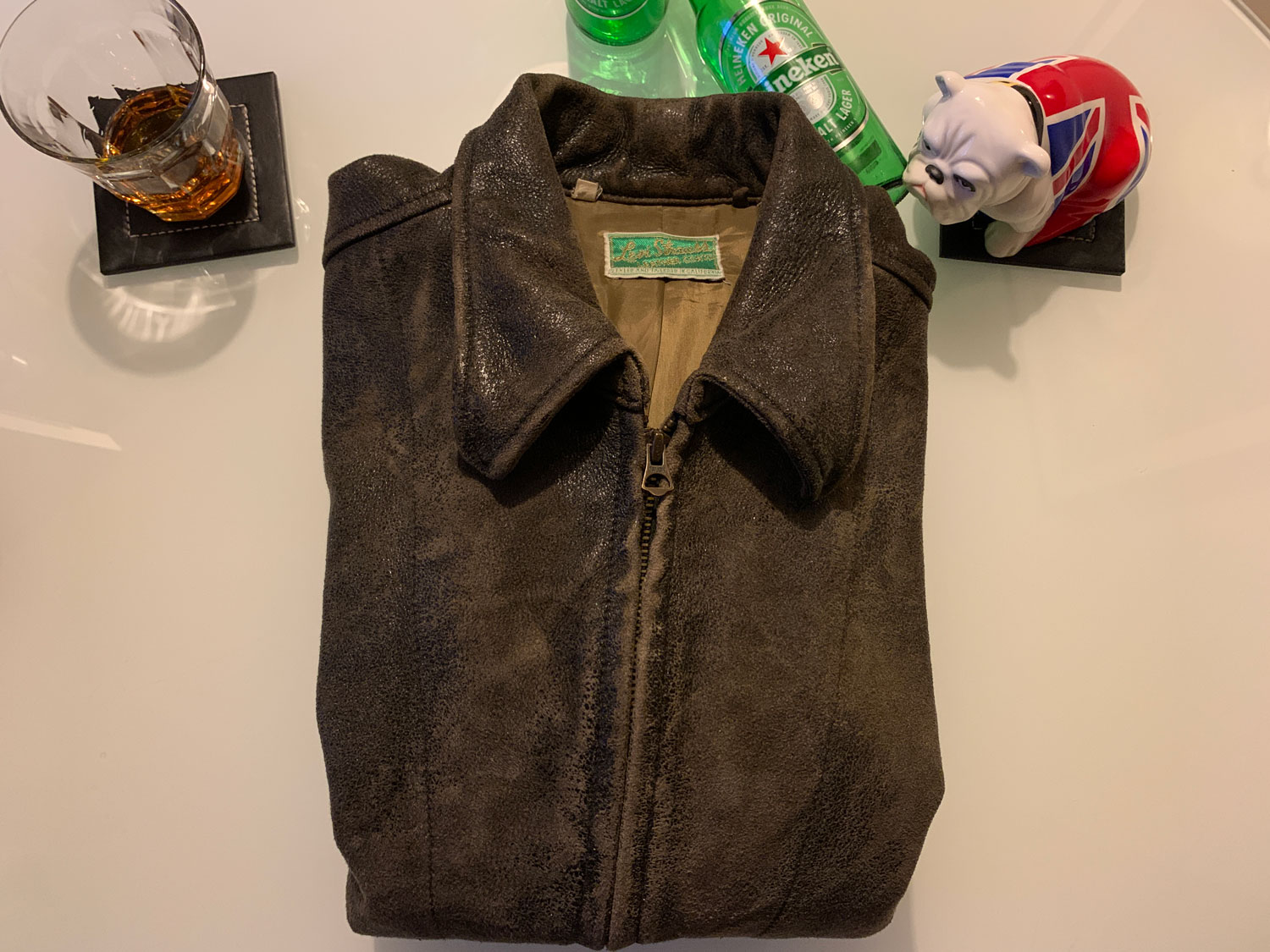 In total Bond is probably wearing the same outfit for 2-3 days, no wonder M commented,

The leather jacket from Skyfall comes from Levi Vintage Clothing, based on a model Levi produced in the 1930’s. I remember hearing that Jany Temime was looking for a rugged and worn jacket as Bond was dishevelled and it matched how Bond felt.

A full interview with Jany Temime can be found in the book From Tailors With Love: An Evolution of Menswear Through the Bond Films. 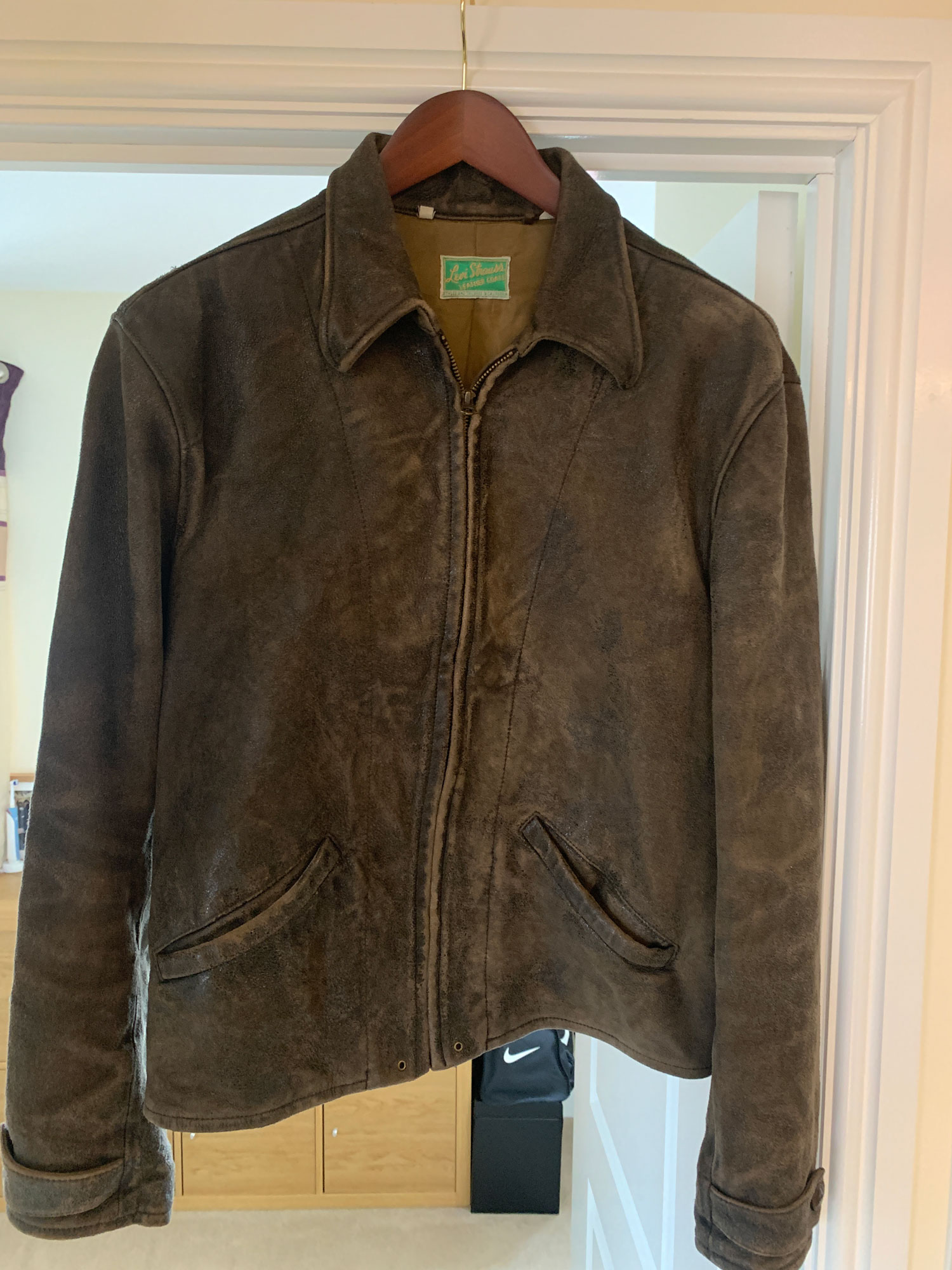 I cannot remember when I purchased this jacket, I seem to have misplaced the order for it. It was sometime after Skyfall and before Spectre, so I know I’ve had the jacket over 7 years. I also know I purchased it through a website called StyleCreep, which continue to sell the Levi Vintage Clothing brand.

The jacket is made of Sheepskin Leather, although the look and feel of it to me is more of a suede. The lining is polyester and has no internal pockets. There are two pockets on the front, there are adjustable tabs on the side, the cuffs are belted (had to look this detail up on James Bond Lifestyle), and it closes with a zip. 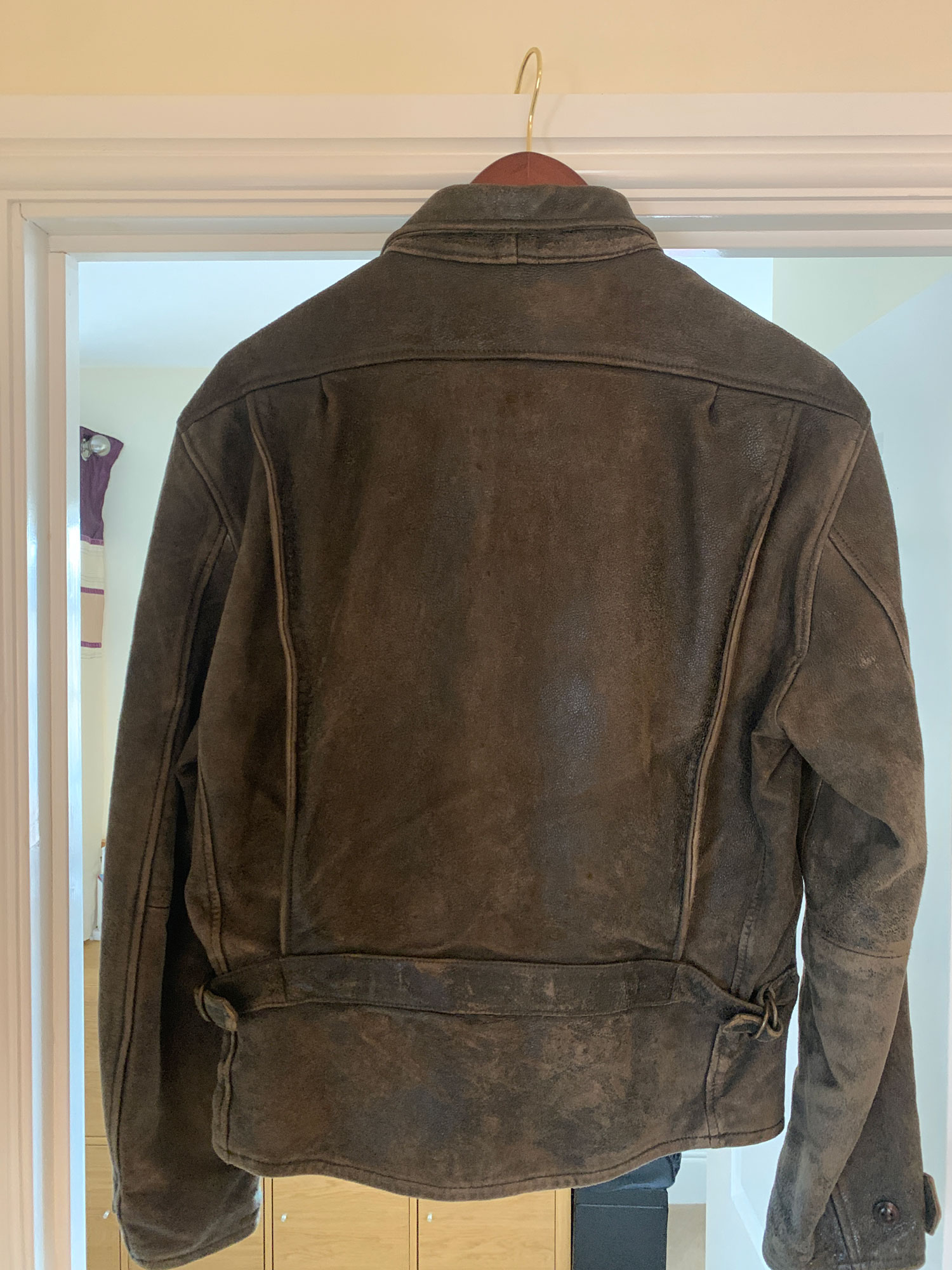 The distressed appearance does make the jacket look quite old, like it’s been handed down through the family a few generations. It does have a slightly heavy feel to it, it wouldn’t be my first choice to wear on the beach, unless the temperature drops significantly at night.

I have a size medium, I have a 40–41-inch chest, and the jacket does feel slightly too big on me, which is fine as I know a small would have been too small on me. But this does give me the ability to wear it in colder environments with thicker jumpers underneath. The only thing I would change is the sleeve length, as it’s a little too long, but not so long that I’ve ever done anything about it. 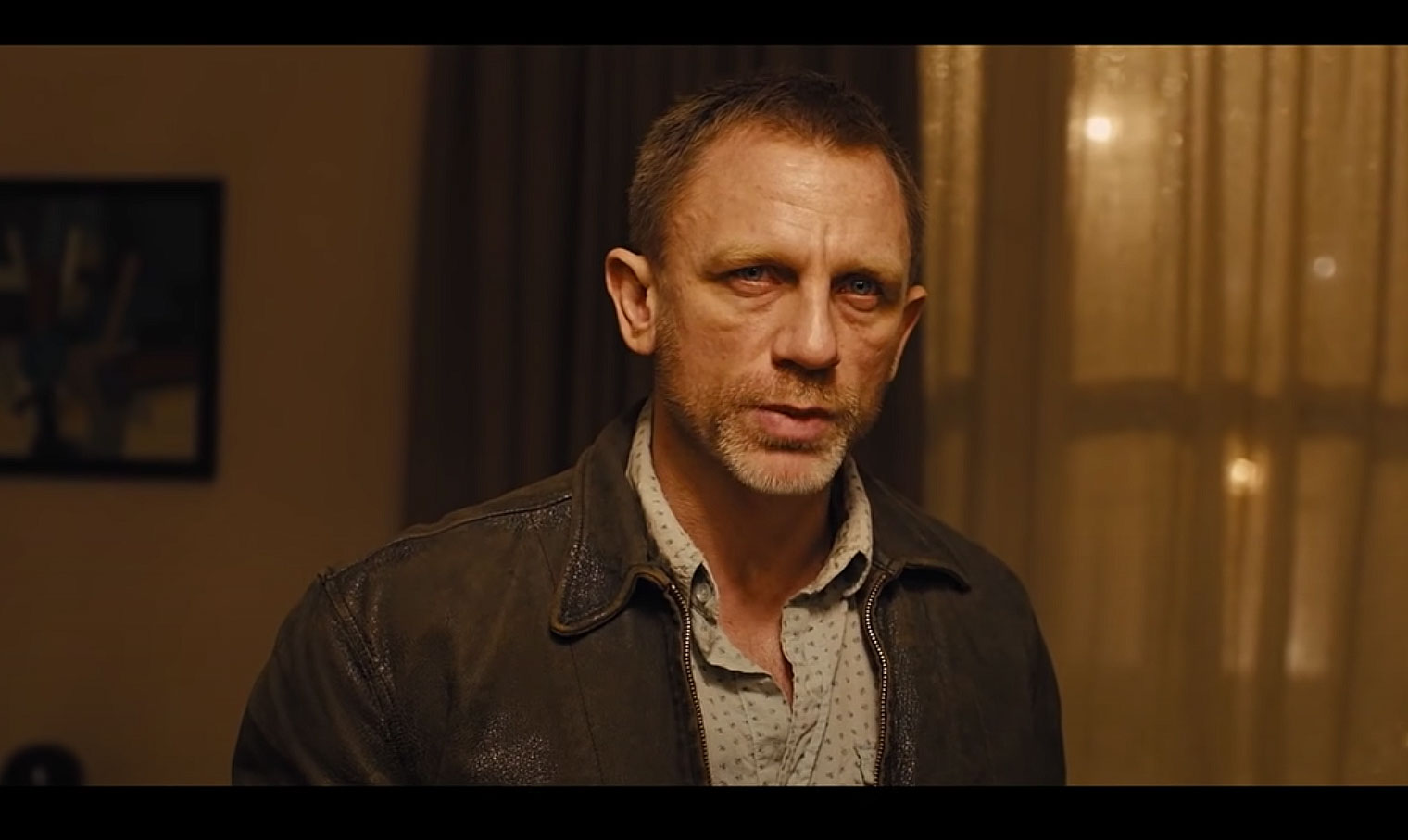 I wear this, like Bond, with casual items. Mostly with jeans and chinos, t-shirts, polos and casual shirts, boots and trainers, and in colder months with jumpers. This isn’t something I’d throw over a shirt and tie with.

Although this is a great jacket, I do find the lack of internal pockets impractical. As I like to carry items in my jackets or coats, usually a phone and sunglasses. Nowadays this would also include hand sanitiser and a facemask. 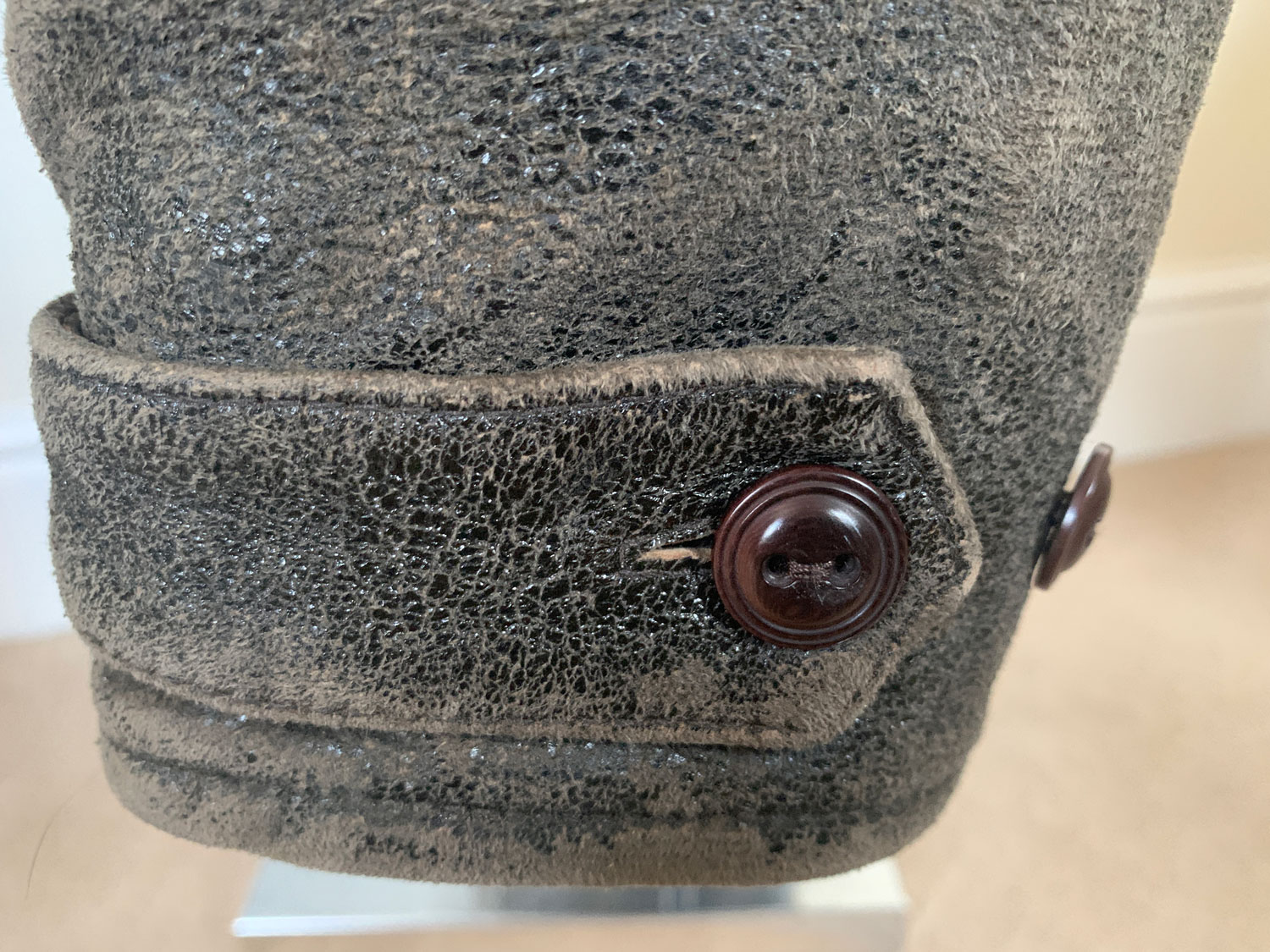 On the other hand, the distressed look to the jacket means I’m less concerned if I distress it further. If I add any marks to it will probably add to look of it rather than take away. If I added any mark to my Matchless jacket, I would be extremely annoyed!  But with this, I probably wouldn’t even notice.

It is quite hard wearing. I think this jacket would be hard to damage in the first place, in a normal environment.  Not if you are in the middle of a knife fight, then there is every chance you’ll damage the jacket and possibly yourself, why are you in a knife fight? 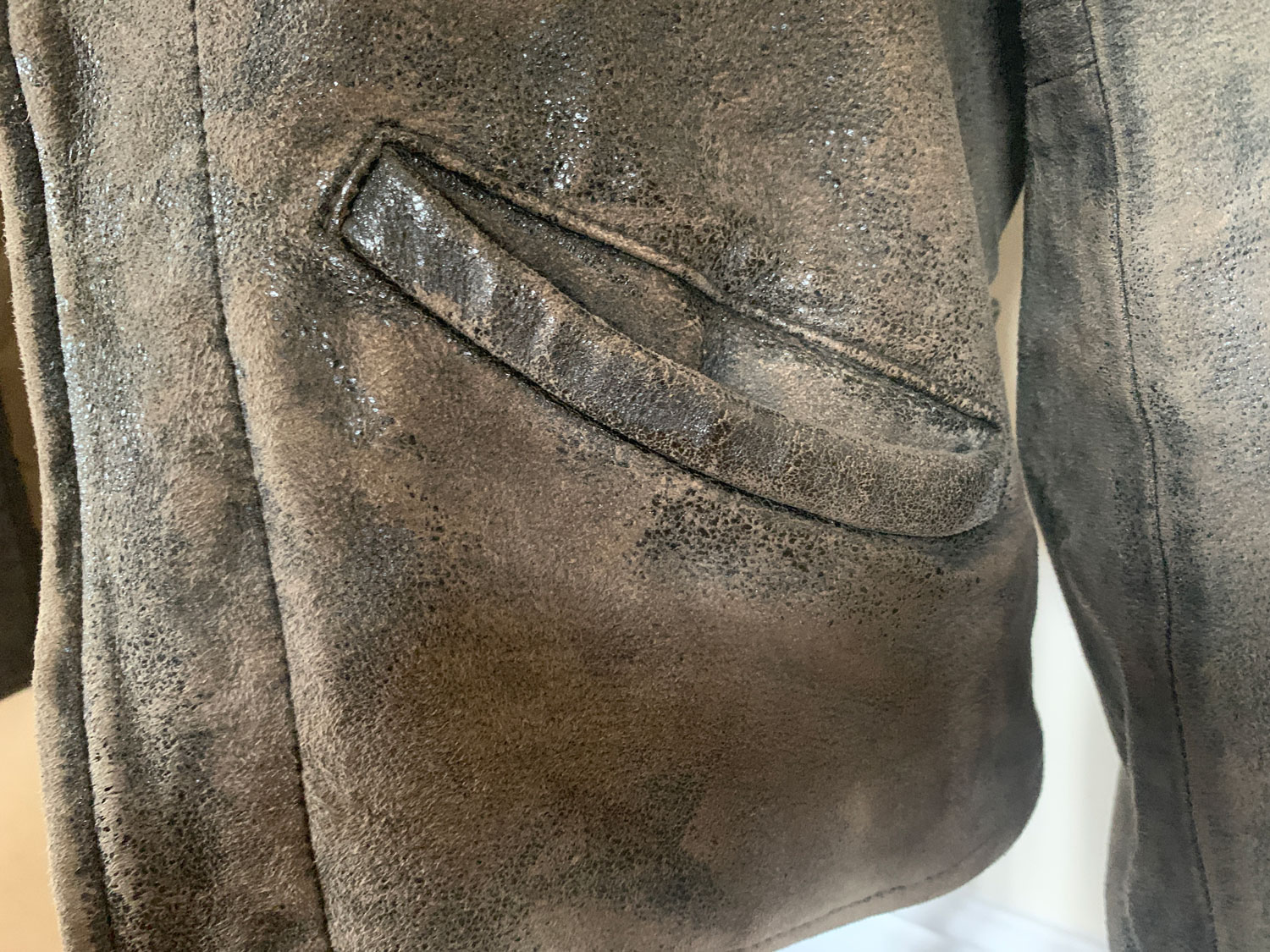 Although Bond wears this on the beach, I find that I wear this more in the winter and spring months.

It is not something I’d think to pack when going on a summer holiday! Bond also wears this in London, which I can see myself wearing it in. Going around the streets of London, maybe in the Autumn (fall) or Spring months.

While planning for this article,  I started wearing the jacket again. This was during the days we had some sun, and it was uncomfortable to wear, even with just a t-shirt under. The jacket is quite heavy and stiff, which works well when you want to keep warm, but not in the heat. 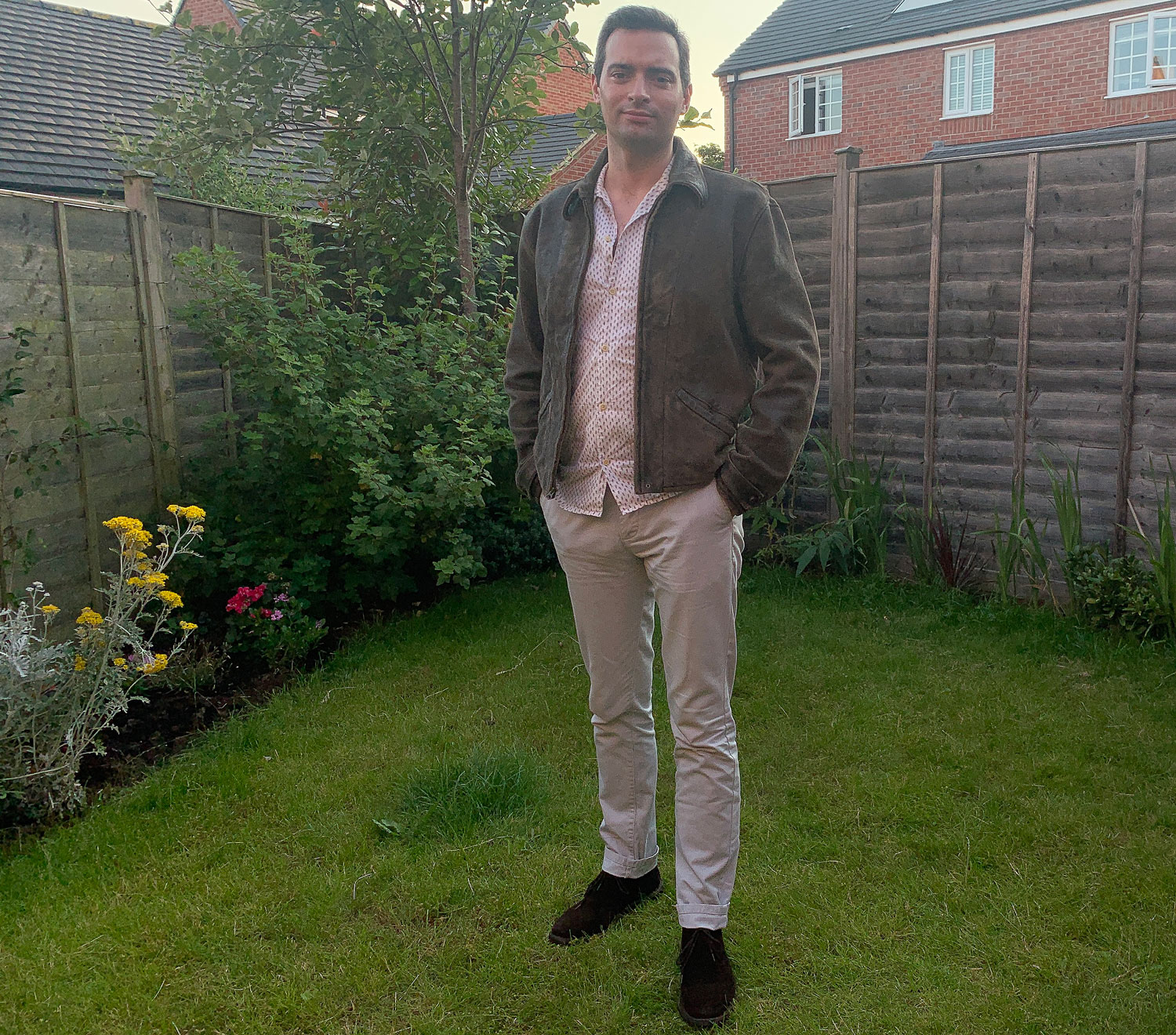 Wearing the Levi’s Leather Jacket from Skyfall with the AllSaints off white shirt camp collar shirt, grey slim fit Topman chinos (can’t guarantee they are the exact same ones from Skyfall) and church’s Ryder 3 boots.

Not his normal choice

This isn’t a typical Bond jacket, not because of the style of the jacket. I think the style, which is classic sits well on Bond, matching with the other casual jackets we’ve seen Daniel Craig’s Bond wear. It’s the distressed nature of the jacket which I think is an unusual choice.

Bond may feel down and out during his time out from MI6. But I wouldn’t think he’d lose his sense of style; in fact, I’d think that would be the one thing that would remain (as well as his need for woman and alcohol!).

It may well be what is available to him, or it’s an effort to blend into his new environment. He’s not gone back to the hotel he was probably staying in, so has no access to the clothes that he bought with him. His Omega Planet Ocean (seen with his TOM FORD light grey sharkskin suit) isn’t on his wrist, so he’s probably sold it and maybe the TOM FORD Striped T cylinder cufflinks for some cash. 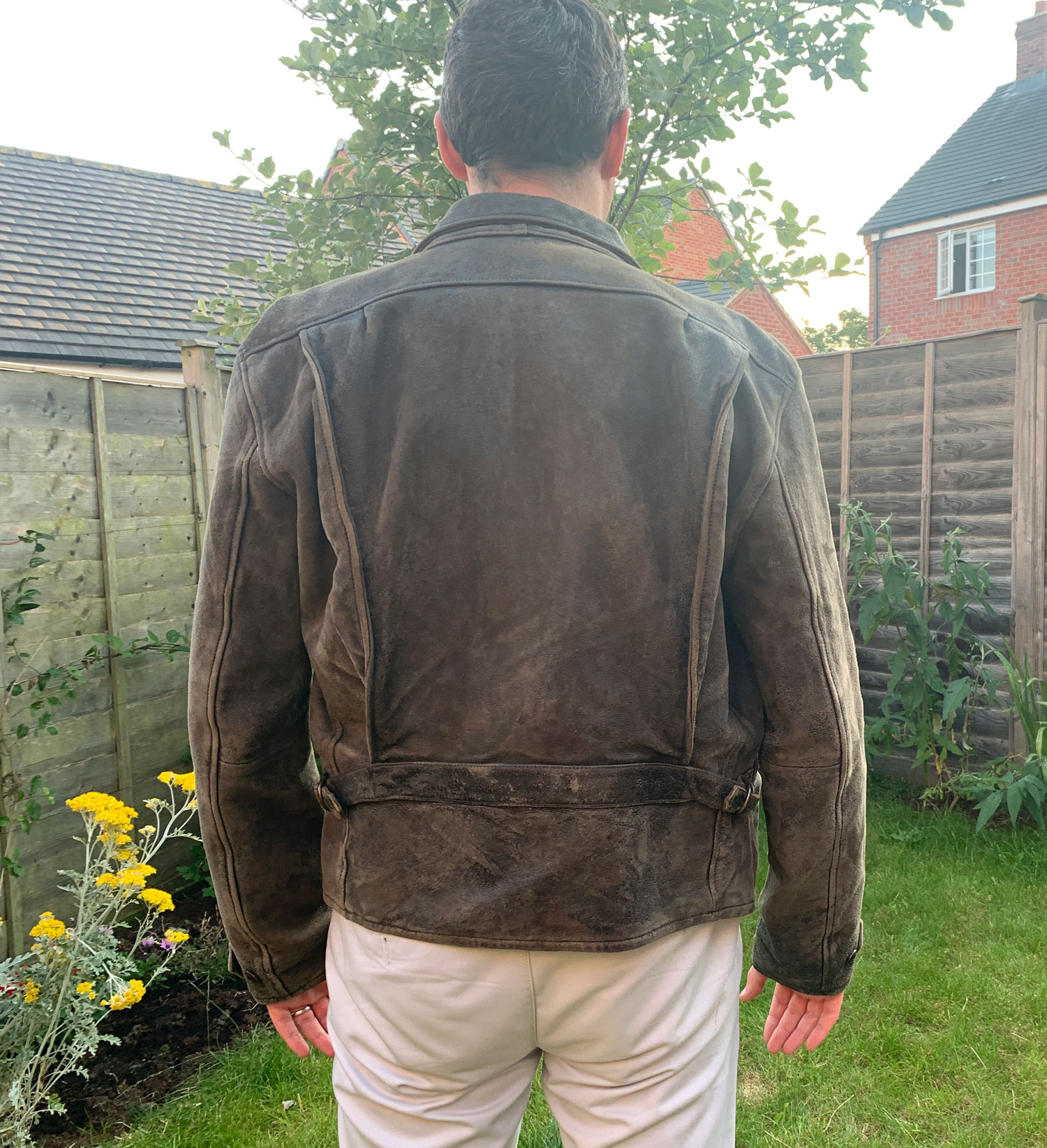 Although I think it’s an unusual choice here, I do really like the look. AND I really like to wear this jacket. It provides a different look to what I would normally have gone with previously, which I’m okay with. It’s always good to step out of your comfort zone from time to time and see if there are other styles that suits you.

The jacket still has a classic look and elegance to it.

Unfortunately, the 1930’s jacket isn’t available anymore, it was getting difficult to get when I purchased this one. If you are interested in getting one, eBay or the “James Bond Memorabilia For Sale or Trade” on ajb007 would be the places to go. Even if there isn’t one available now on ajb007 you could put a feeler out to see if anyone is interested in selling to you. 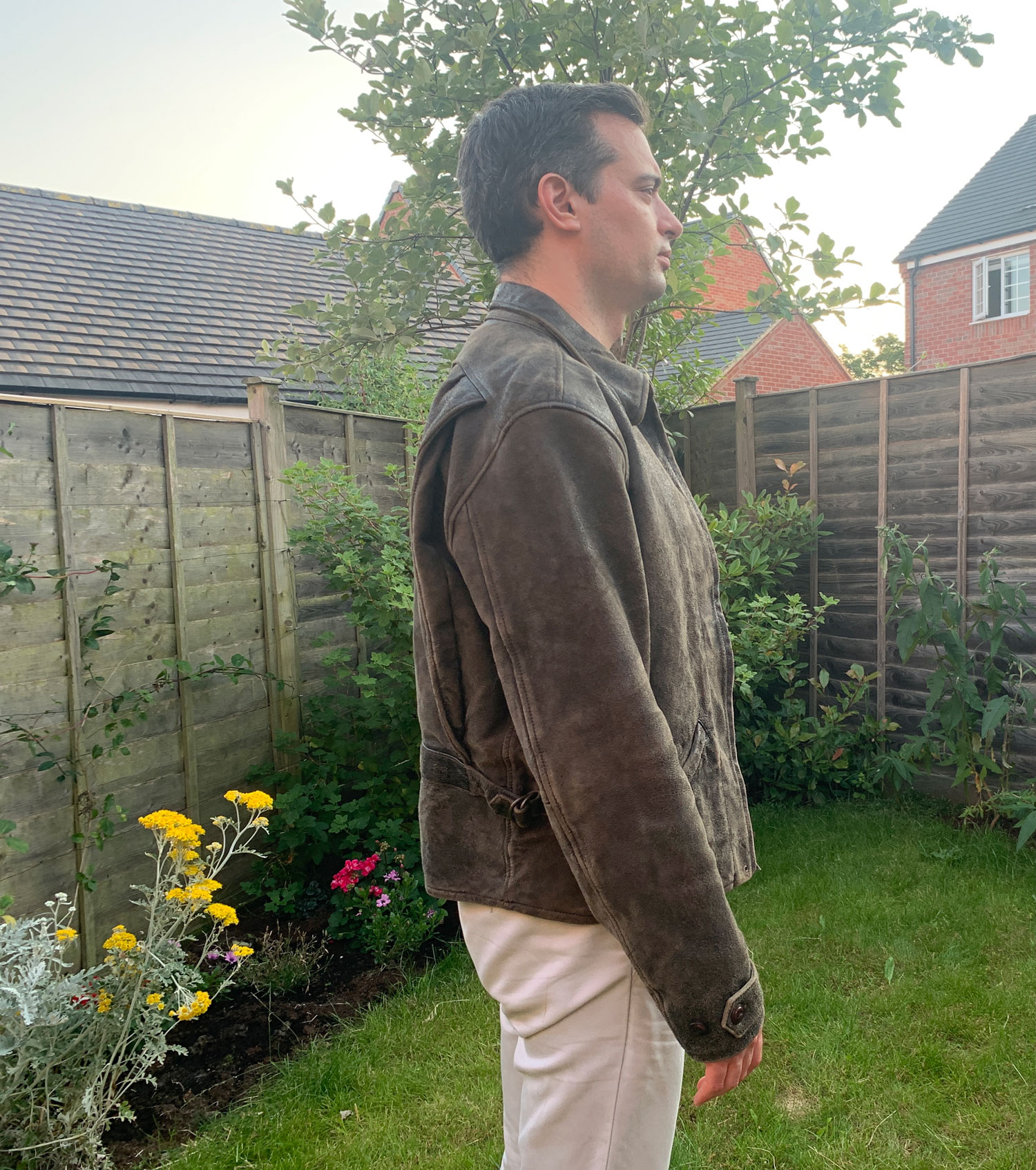