“Just a slight stiffness coming on.” Bond, On her Majesty’s Secret Service

Stepping off the train at Lauterbrunnen, the valley before the ascent to Murren, base camp to Piz Gloria, home of the newly commercially coined ‘Bond World’ you’re hit with an indistinguishable smell of cow shit. 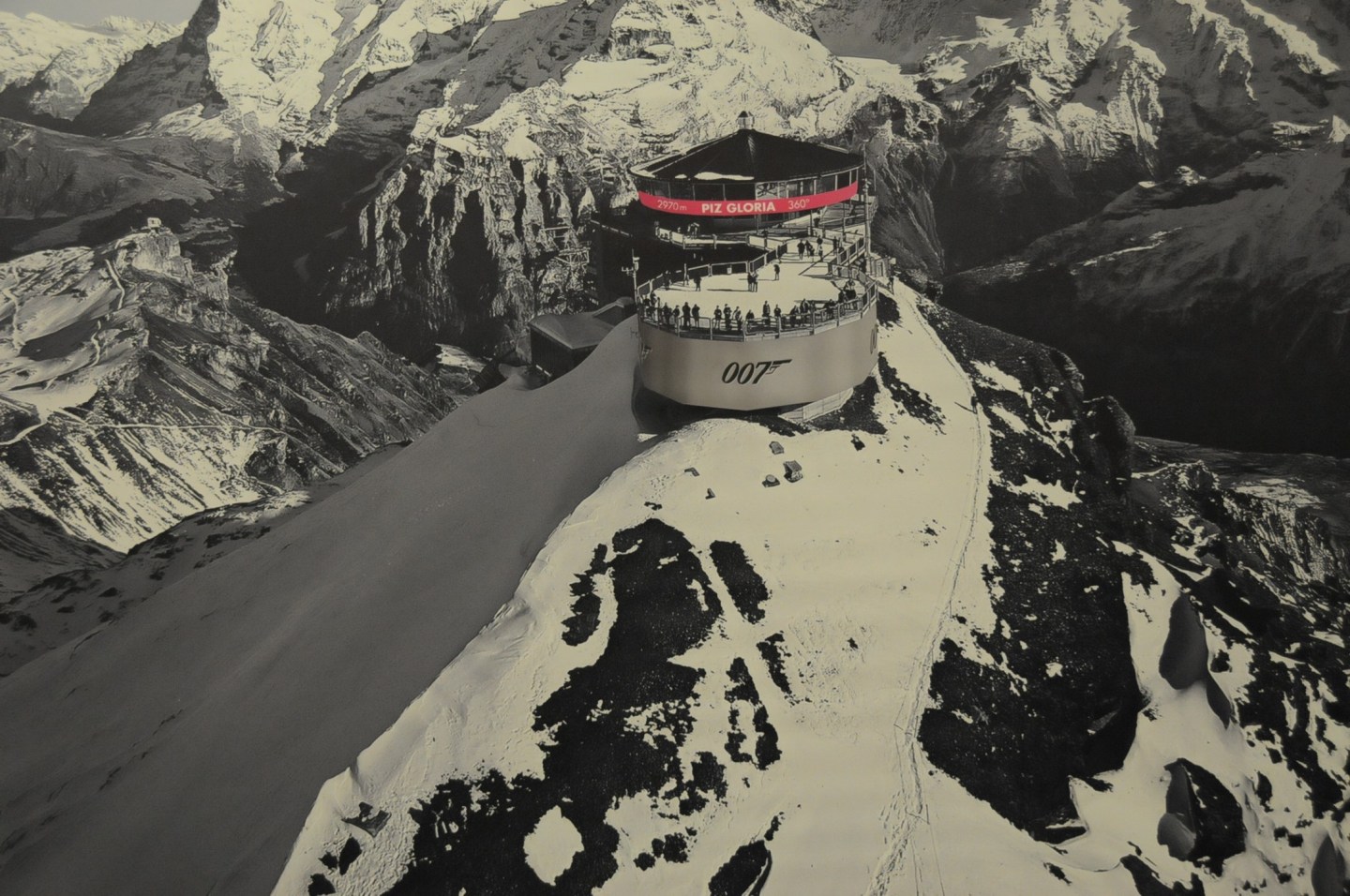 Lauterbrunnen still 2612 feet above sea level, is also the end of the line for the melted caps descending from the peaks of Jungfrau, spilling off the table top down into the ravines. It’s the most beautiful train station you’re likely to see. 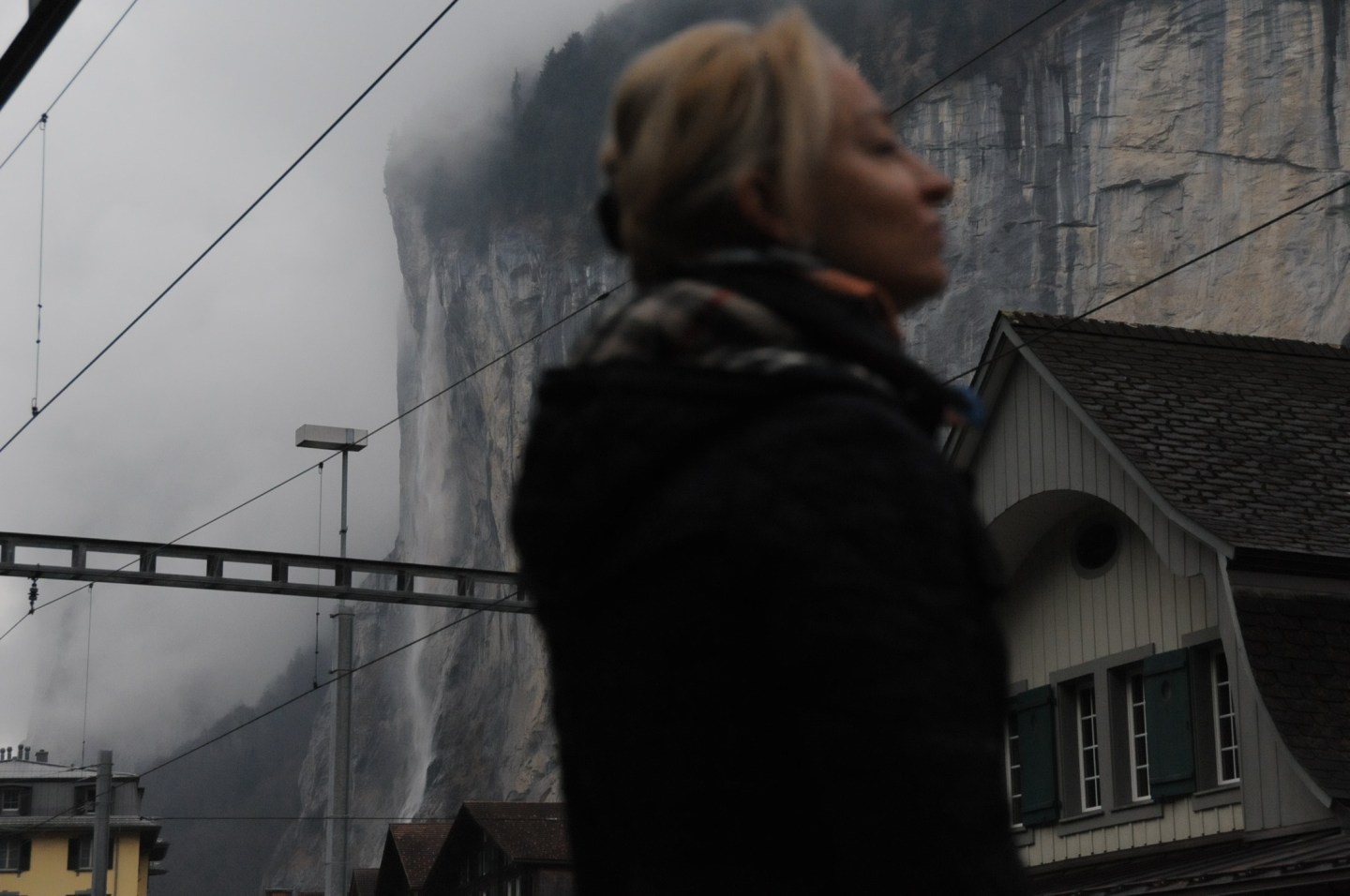 How to get to Piz Gloria

To try and school you in the exact route for your pilgrimage could be a lesson in futility. Numerous cable carts, trains, even the 141 bus. All you need is the SBB App, a Swiss Pass, and a girlfriend that has a nose for north. 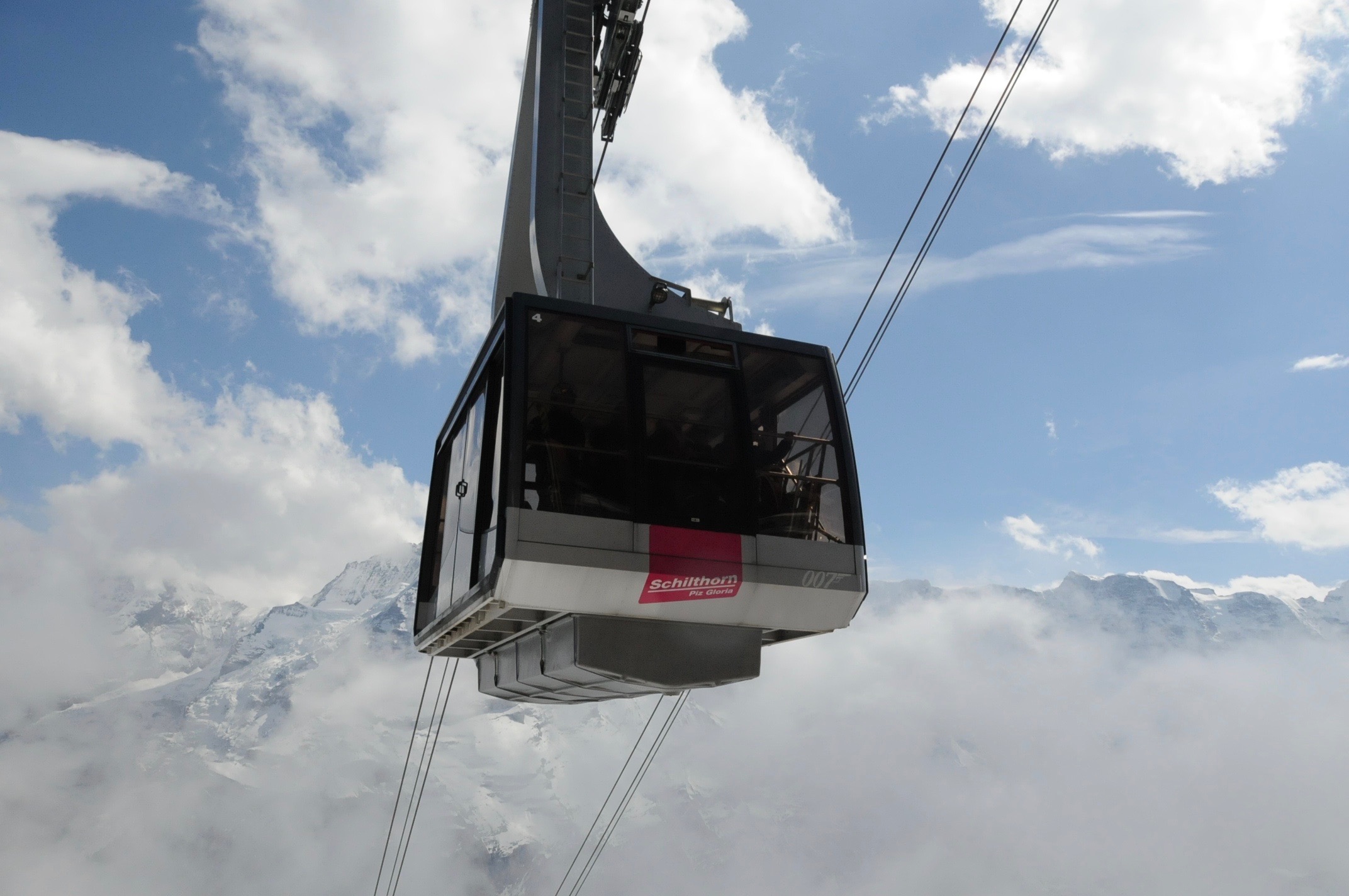 You’ll know where you are when you hit the cable cart at Grutschalp, a totemic poster of George Lazenby in his herringbone suit, dimpled chin and balled fist is there to welcome you.

In the foyer a Schilthorn Bond snowglobe, a shadowy figure reminiscent more of the Man from Milk Tray than Bond is embossed on an over priced hipflask.

We get to the hotel, in Murren, a listless man with a tightly coiled grey mullet perm serves us a couple of Campari’s. 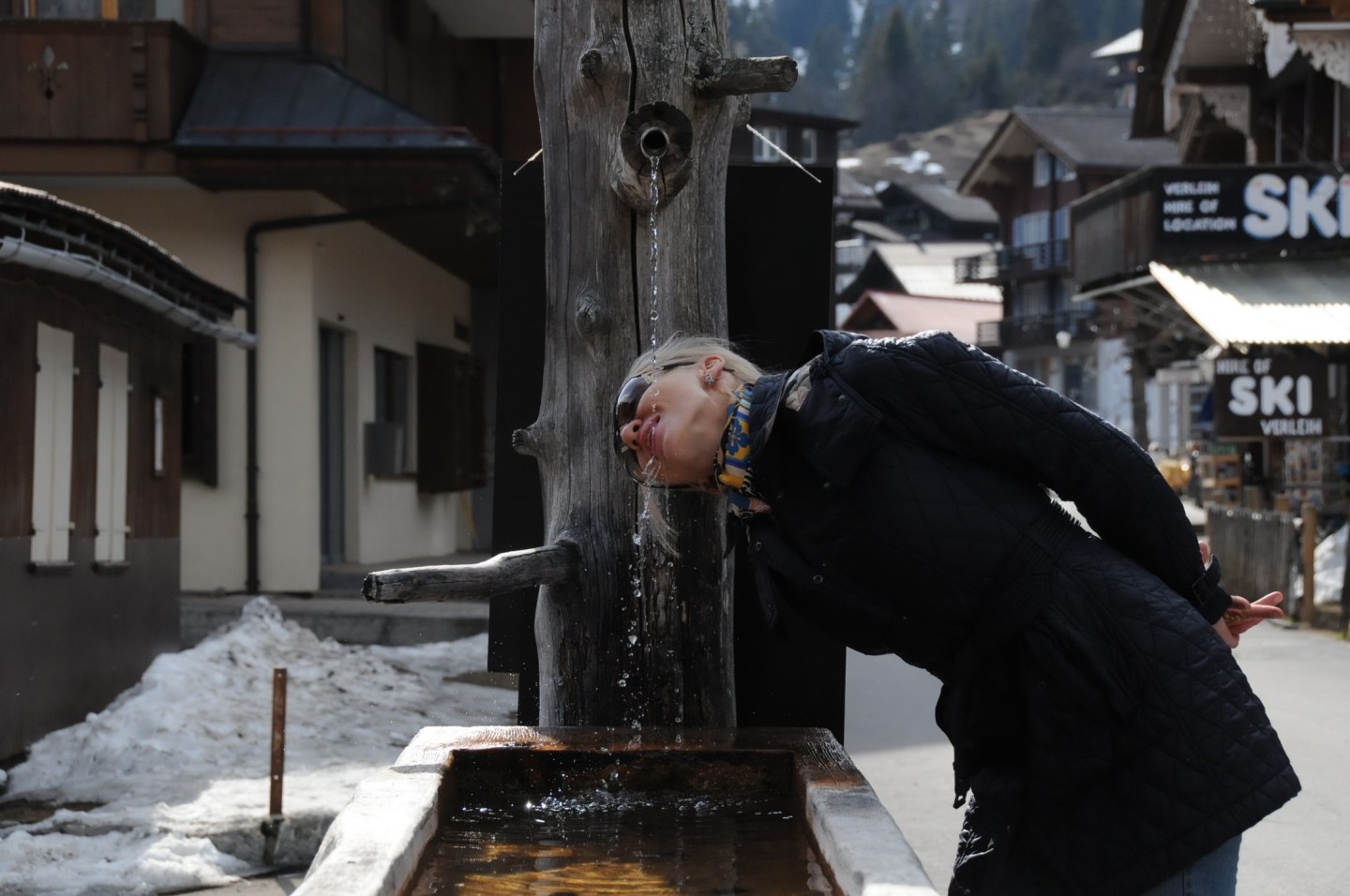 Where to stay in Murren

We checked into our room, a chalet at the back of the hotel Blumental. The travel, the altitude, the two bottles of fruit brandy consumed the night before, quenched all my minds exuberance. (Check out the review of Blumental on my other blog here).

I slept, expertly. Tomorrow would be one of the best days of my life.

Piz Gloria is Schilthorn. Piz Gloria wasn’t actually a thing until Fleming made it a thing. The revolving restaurant that was in the process of being built in 68’ was scouted by Hubert Fröhlich for the upcoming celluloid Bond, On her Majesty’s Secret Service. 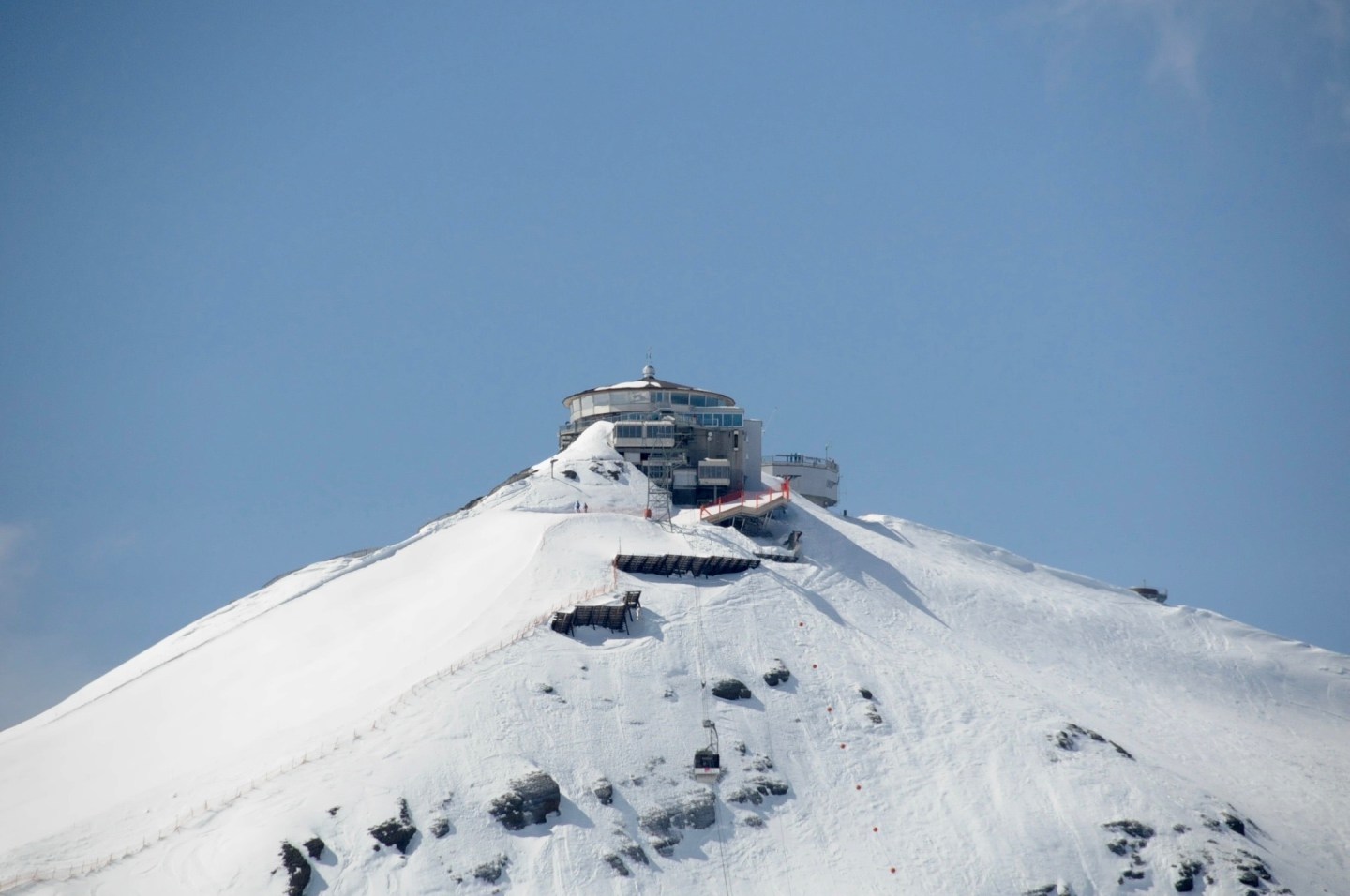 The making of Piz Gloria

It ran out of ideas and money, the Bond Production company EON stepped in with a rescue package which enabled them to redesign the construction to fit the narrative of the movie.

Off the gondola from Birg at Schilthorn, spearheading the pack of Chinese tourists, left the missus for dusk. Up two escalators, through the souvenir shop to the roof. 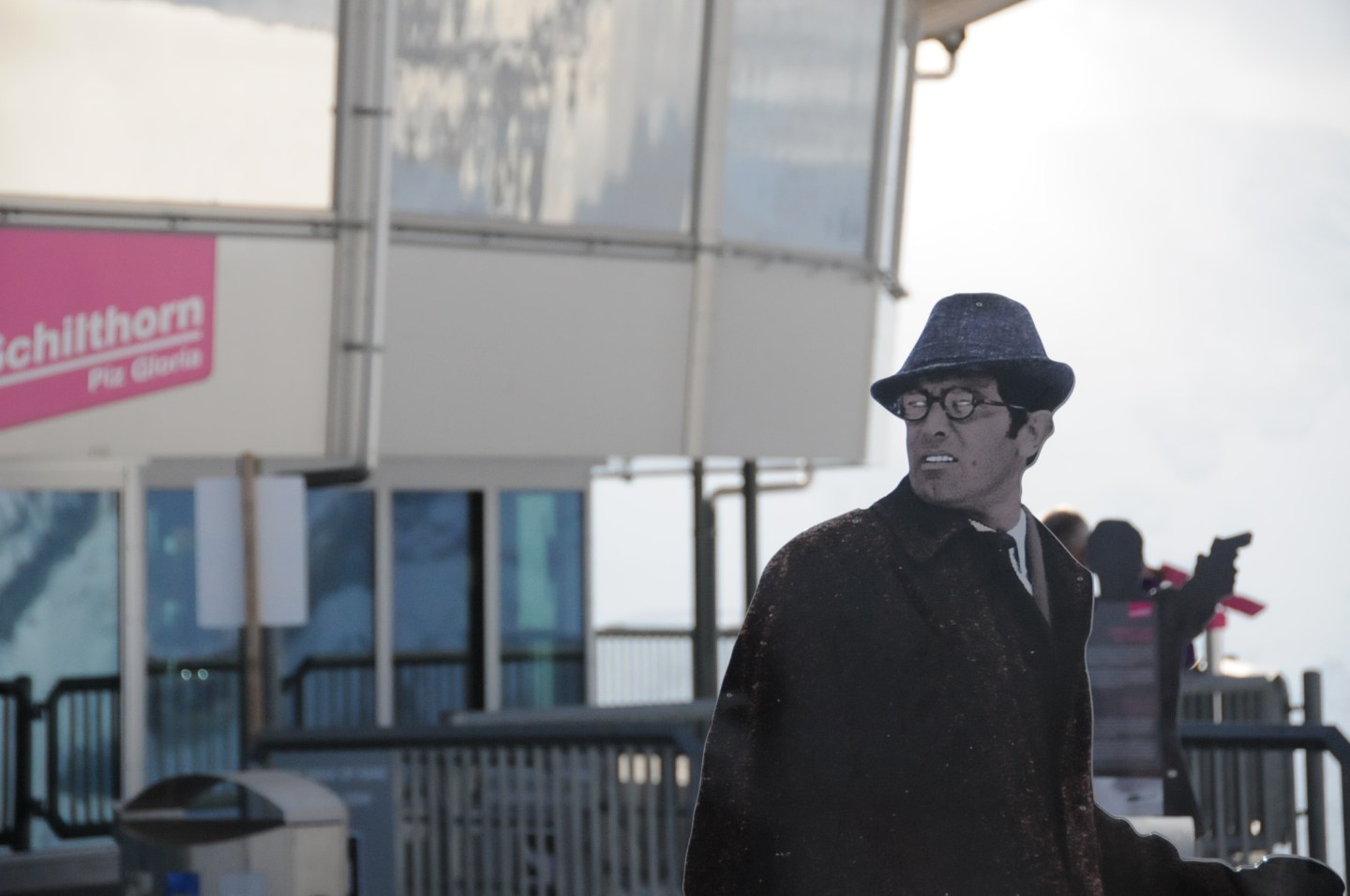 On the Sky Deck

Made it, the very epicentre of the Bond universe. Two 2-d Lazenby statuettes made from acetate and durable fibre glass positioned themselves proudly on the skydeck where Bond stockpiled his shag list during a game of curling.

The snow spat with the velocity of a gritter truck. The Chinese tourists erupted onto the skydeck like one of those videos you see of American’s invading a Walmart on Black Friday. God bless them, injecting hard currency into Bond World, no doubt single-handedly financing Piz Gloria’s operations and keeping the Broccoli’s in Bollinger. 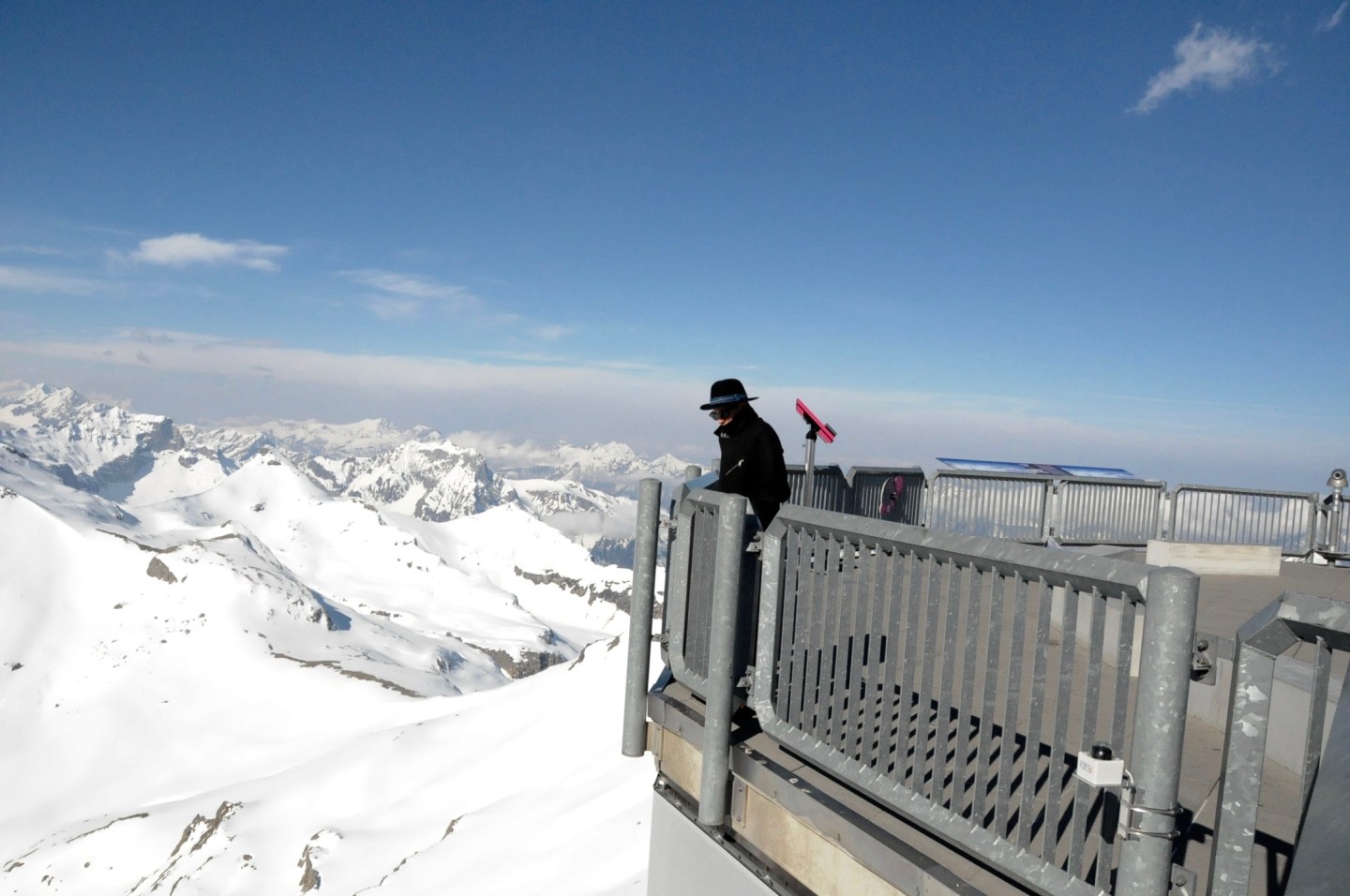 Inside, to the restaurant. €33 for a Bond brunch which did not consist of beluga caviar north of the Caspian, or a Dom Perignon ’58. But baked beans, crispy bacon, waffles, Goulash soup and strips of seasoned salmon. Perfectly acceptable.

The original gold lattice grill caressed the lip of the stairs (replaced by bamboo for the Tracy fight) behind was a picture of Ursula Andress in the ravishing loin bikini. Gone is the log fire and sofas adorned with Blofeld’s angels of death, in its place the buffet and Bond bar, unmanned. 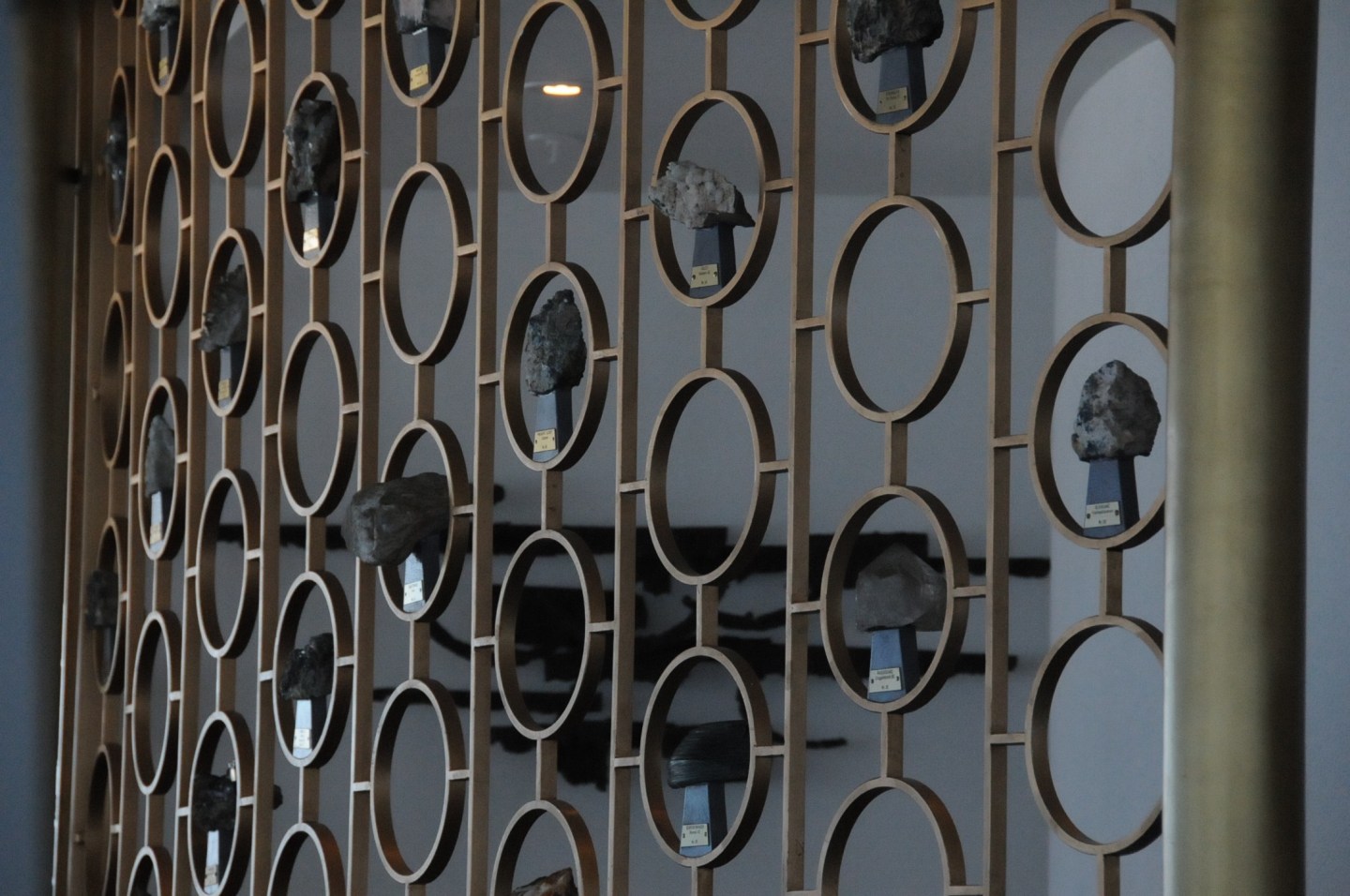 “Can you not just enjoy the view,” Anastasia sighed. “Of course” I said embarrassed, putting my phone down. I had updated 4 social media platforms announcing my arrival, such a gloating sycophantic twat.

Ignoring the panorama of snowy peaks of Jungfrau & co in the distance as the restaurant rotated, almost to the point of discombobulation, especially when one is on his 4th glass of white Merlot from Ticino. 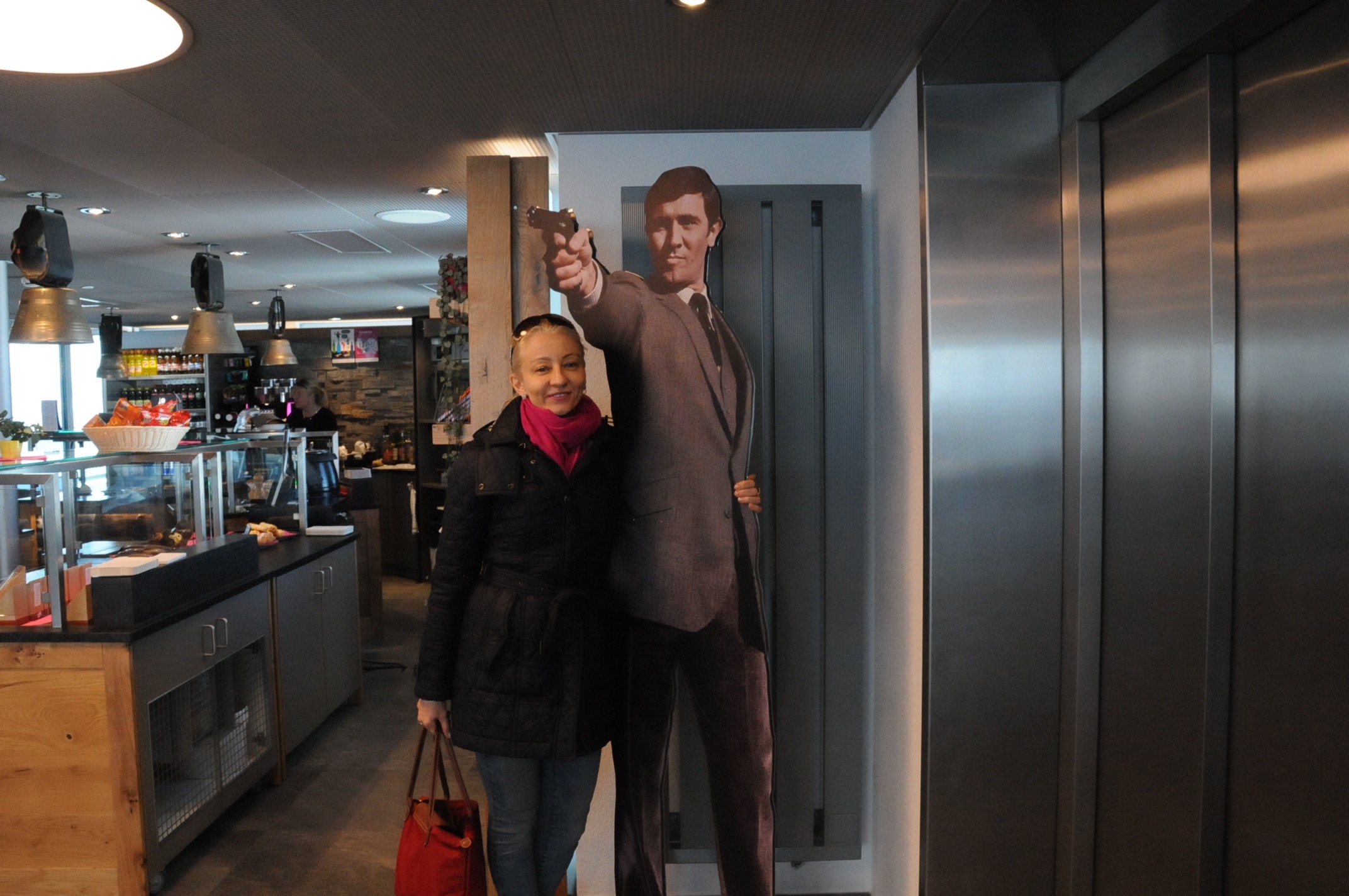 The long corridors beneath the Alpine Room were lined with Bond posters, chronologically, the good ones. The cartoon ones. It then eddies through the Daltons, Brosnans’, finally coming to a pitiful stop with a solitary shot of Daniel Craig wearing a roll neck and shoulder gun holster.

If ever there was a more linear depiction of creativity being lost in the arts, capitulating during the 80’s, prolapsing through the 90’s then finally flatlining in the 21st century, look no further than the Bond posters. 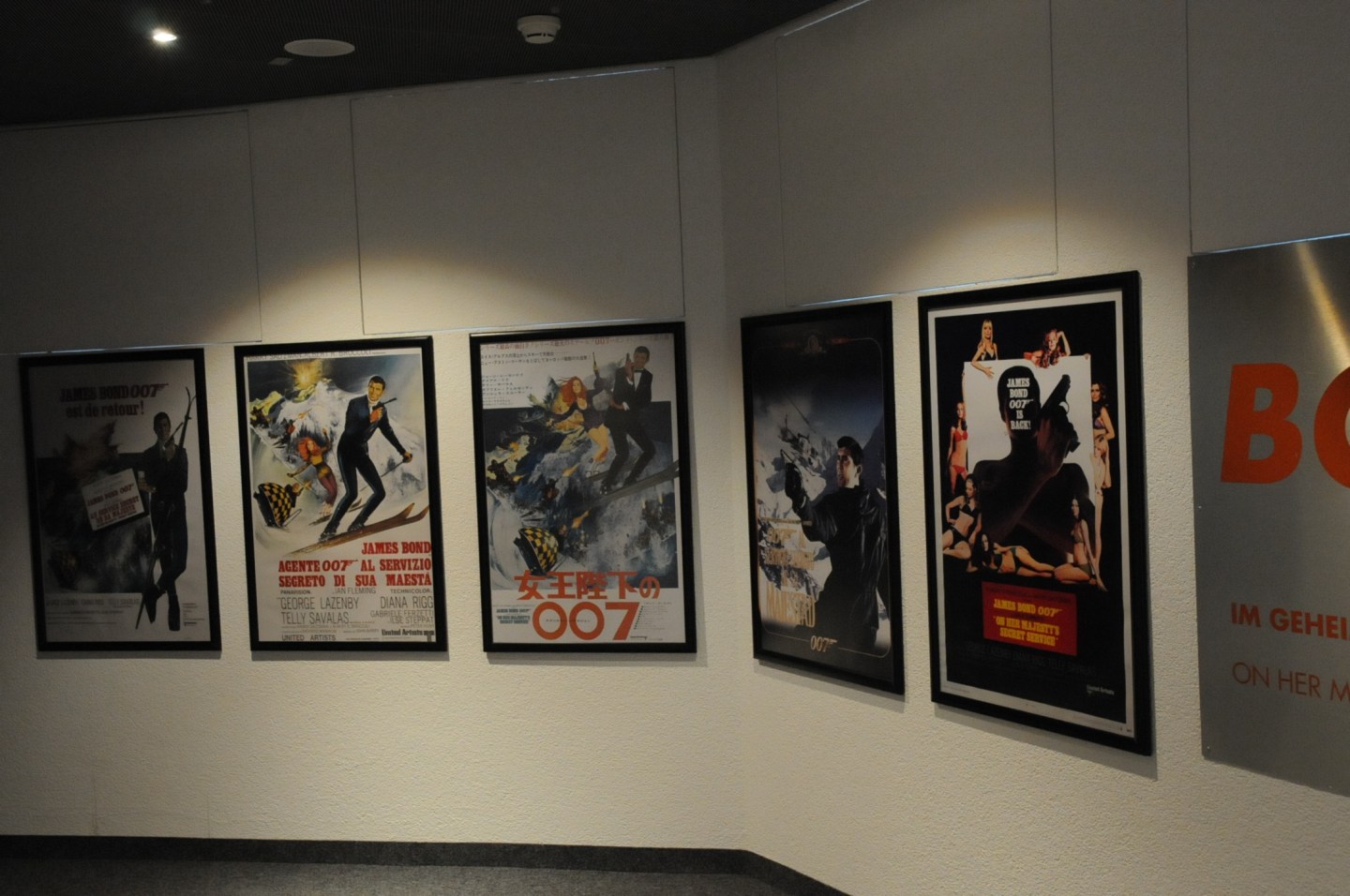 Inside the museum we were free from the Chinese tourists, hah! Fucking charlatans. A mere selfie on the skydeck with a Lazenby statue and that’s that box ticked.

But this. THIS was for the purists. Seeing Blofelds Coat of Arms, (apparently created by the College Coat of Arms especially for the film, details in the appendix) learning that Diana Rigg never bothered to learn to ski and did all the scenes pulled in a sled on her knees, how Lazenbys’ stunt double slipped from the cable cart scene into a valley, only to be saved by an outstretched hand by an employee of the cable cart company who so happened to be at a foot of a pillar. Had he not, he would have plummeted into the ravine ‘unchecked’. 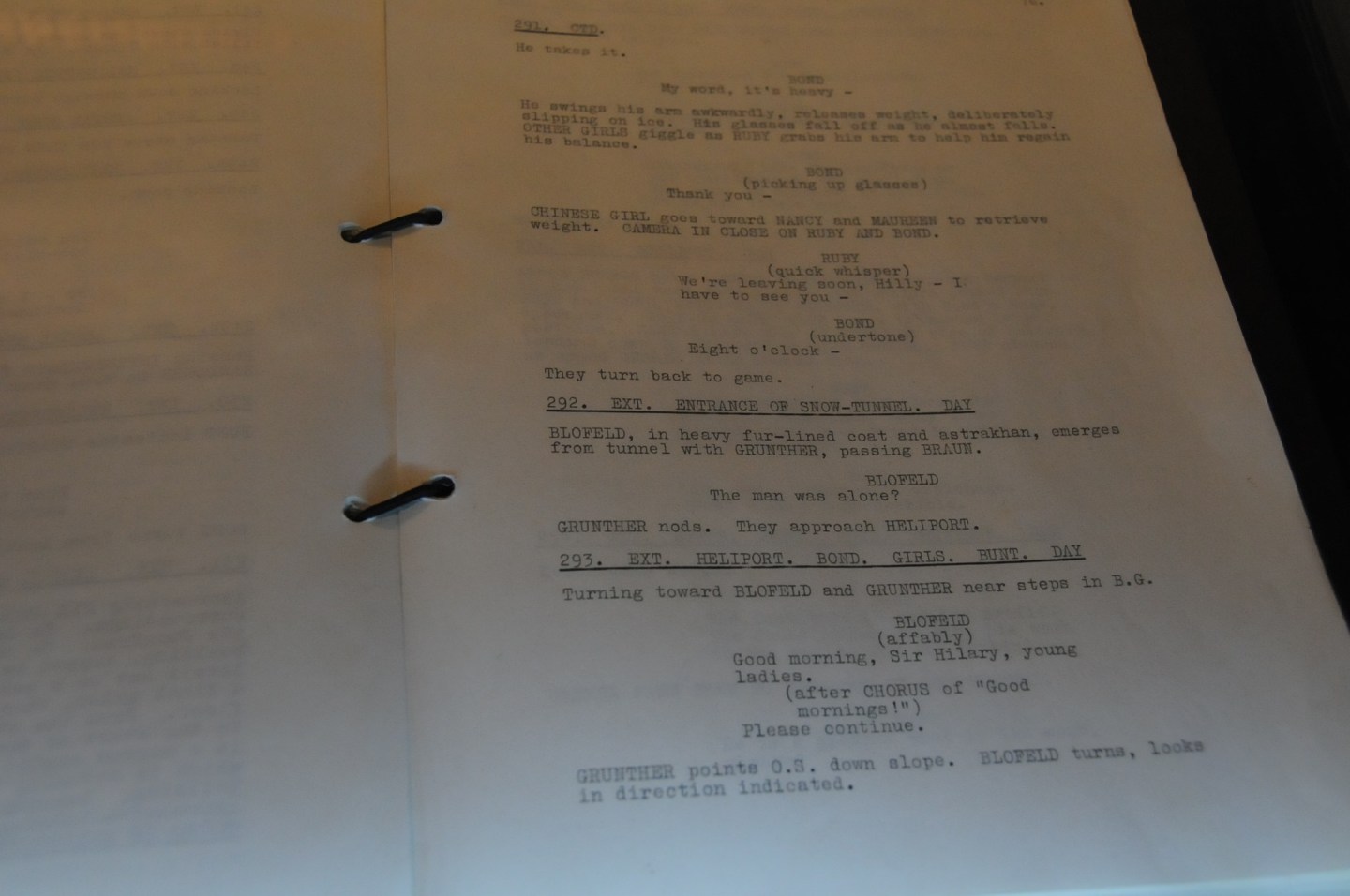 There’s the toboggan simulator, which looks like neither of the two from the film. It’s a bit of rubbish really. There is rubbish here. The souvenir shop is rubbish, the perfunctory Bond cap, the arbitrary Bond Snowglobe, a flimsy over priced coffee mug.

There’s a magazine that looks like a panini sticker album from the early 80’s. Sadly no book by Charles Helfenstein on the making of the movie, (apparently the bible on such matters) or any original artwork. 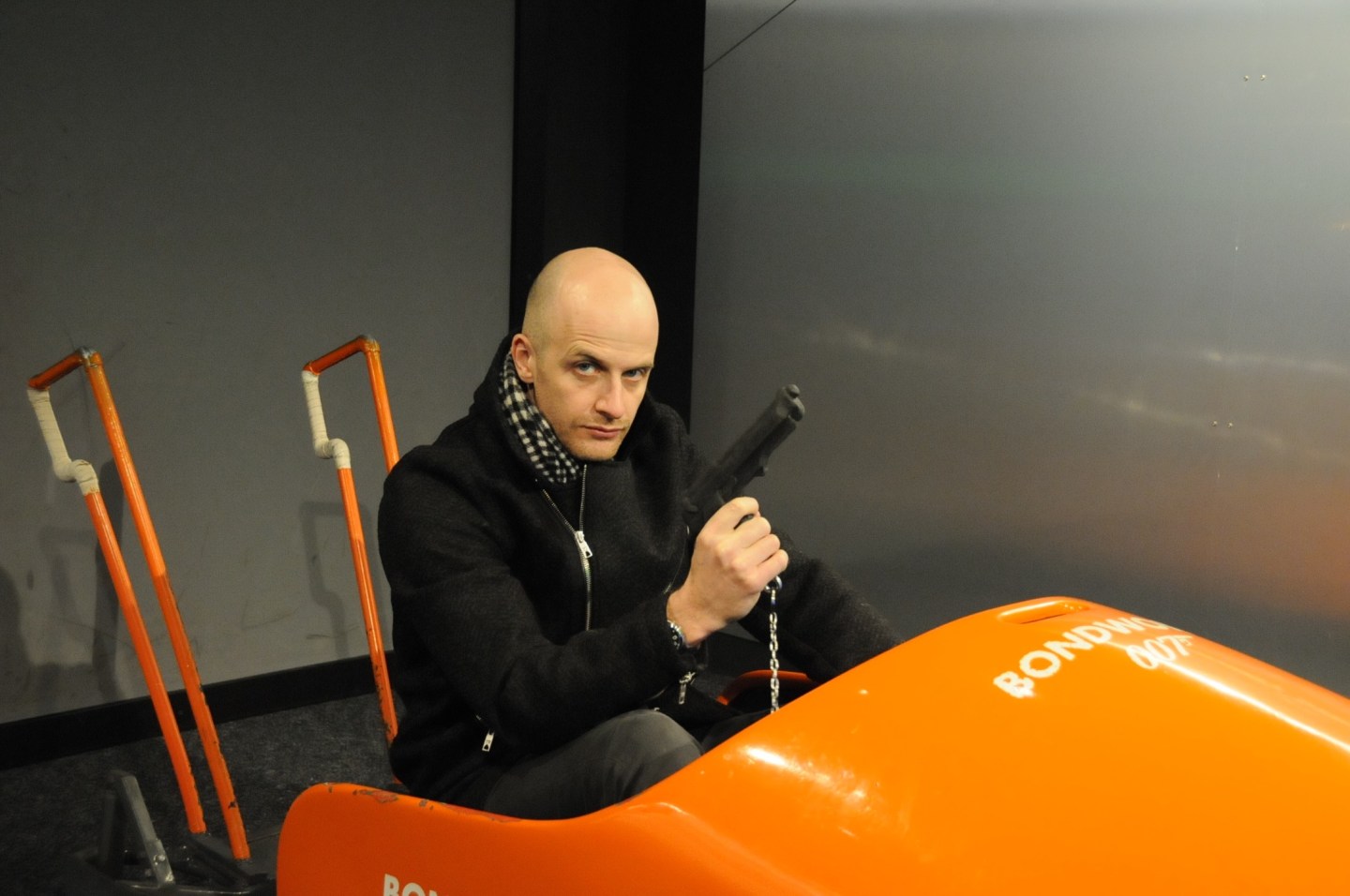 Back down in Birg, the skywalk takes you round the edificial facias. This is free, yet inside you pay through the nose for a shot of grappa. It got the juices flowing, the rest of the day, the missus and I got suitably sloshed at the foot of the slopes, with a bottle of Gewurztraminer in typically Brit-abroad fashion. We talked about how logistically we could get married in Bond land. 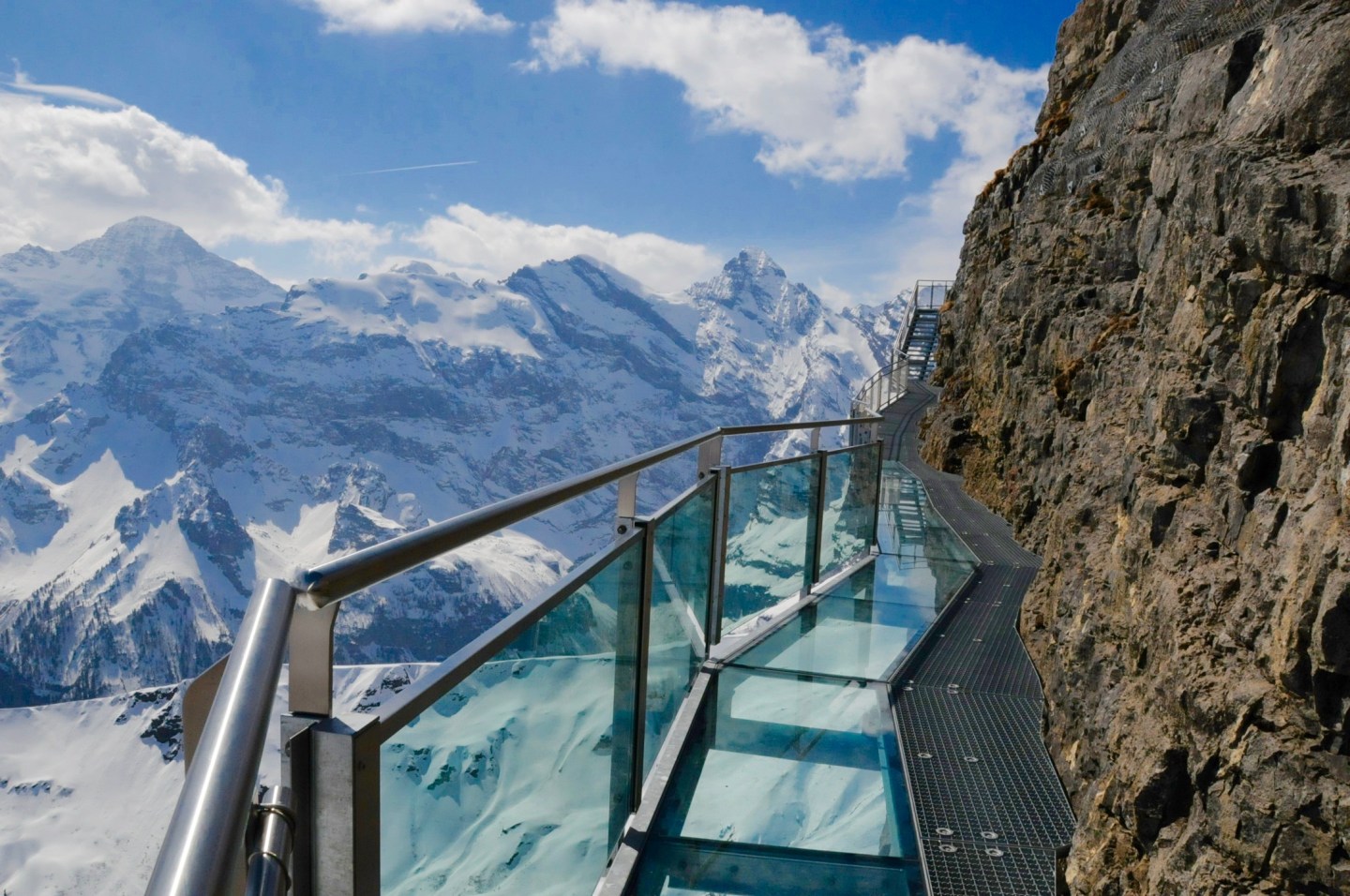 Two bottles later we went from hiring the John Barry orchestra, requisitioning Tracy’s dress from the Bond memorabilia hotel in Milan, getting Lazenby himself to do the ceremony, to a small reception in Montagu Square under a 10 man tent. At some point I asked Anastasia to marry me under my breath.

I’d never asked anyone before, Bond himself only asked once, on this very mountain no less. She impassively told me I can’t afford it.

Later during the dinner I told her implicitly, somewhat smarted, ‘that wasn’t a proposal you know, you do know that don’t you. I can’t be refused on Bonds mountain. I’m not sure what happened back there, but one thing is for certain, I didn’t propose.’ The conversation moved swiftly on. 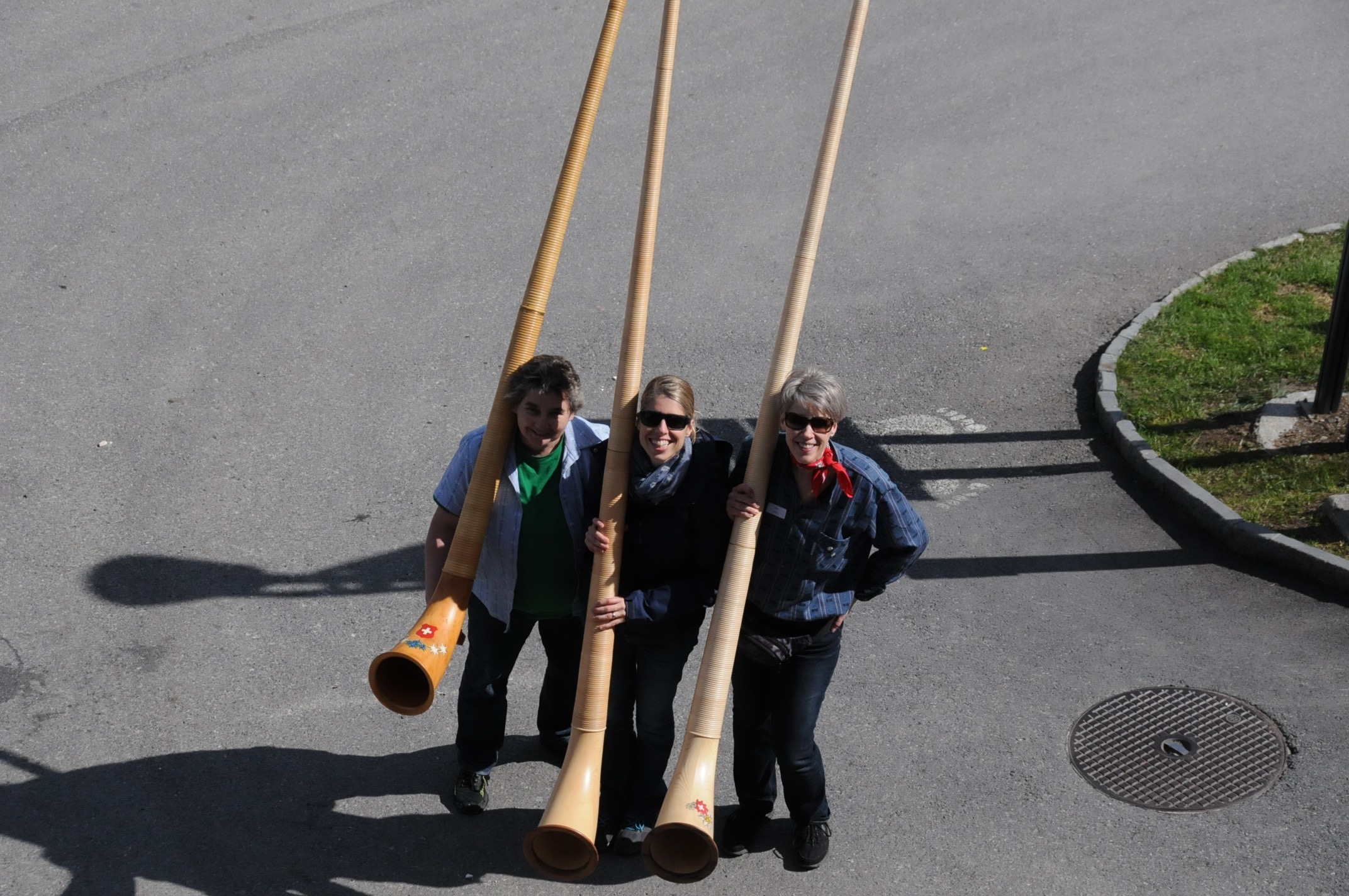 Later we had cocktails facing the resplendent and quite unequivocal Jungfrau. Some sturdy looking ladies below us bellowed on with their alphorns that sang across the valleys. A few precocial shops threw up their closed signs, another shit day at the dog ends of a season. The Murren people really can’t make out what all the fuss is about.

About a film that was shot here 50 years ago, that has now transubstantiated into a hybrid of a skiers pit stop, a Chinese tourist check point, and a Bond geeks wet dream. Either way it brings in an unusual buck for them. It brings a tear to my eye. 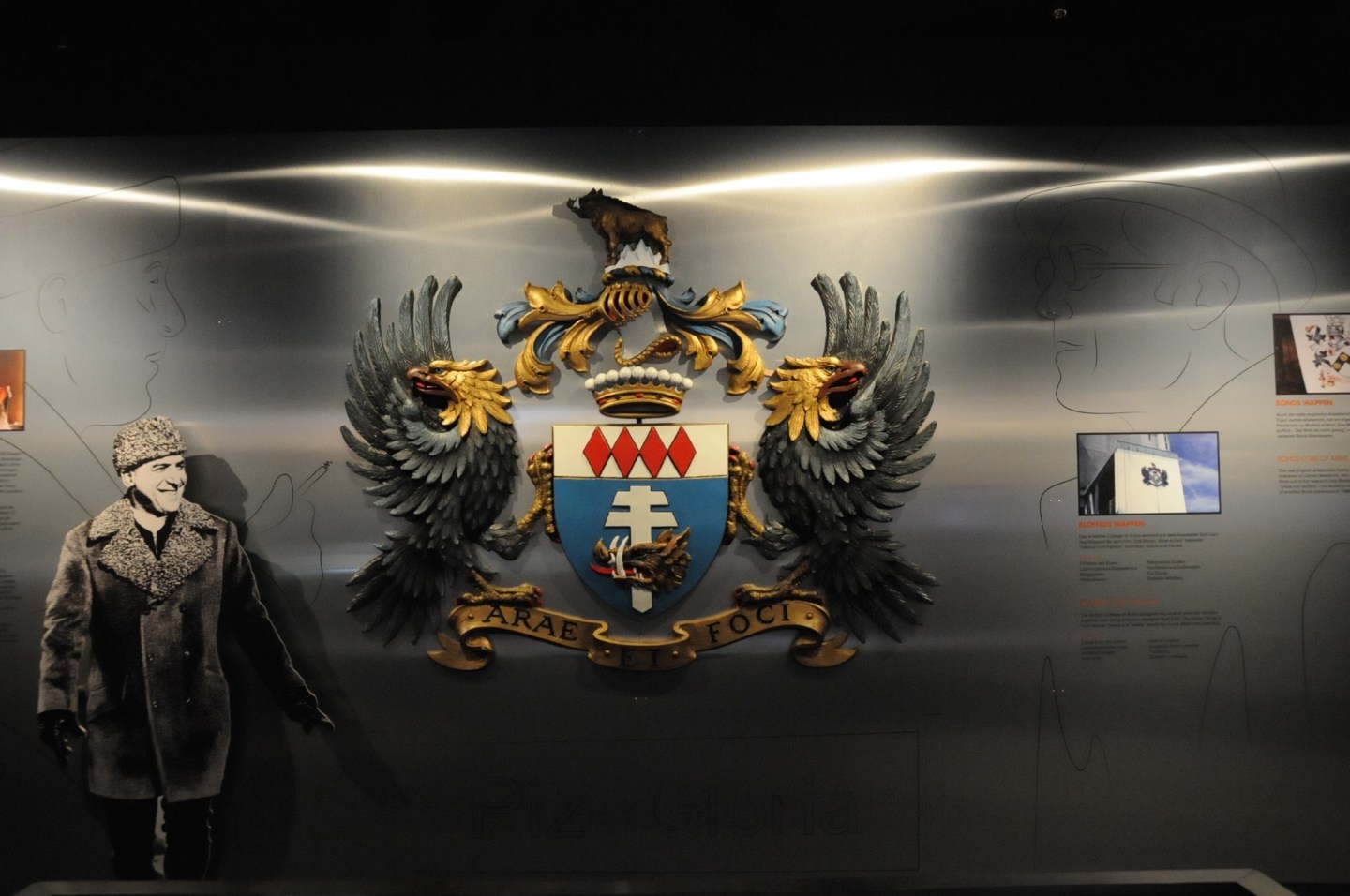 Pearls on the crown: These determine rank, there are 9 which signifies a Count

Mascles: The diamond shapes on the shield are on the actual Blofeld arms and are there for realism

The Motto: Arae Et Foci – Of the Air and Soaring

These arms were actually created by the College of Arms for the film. 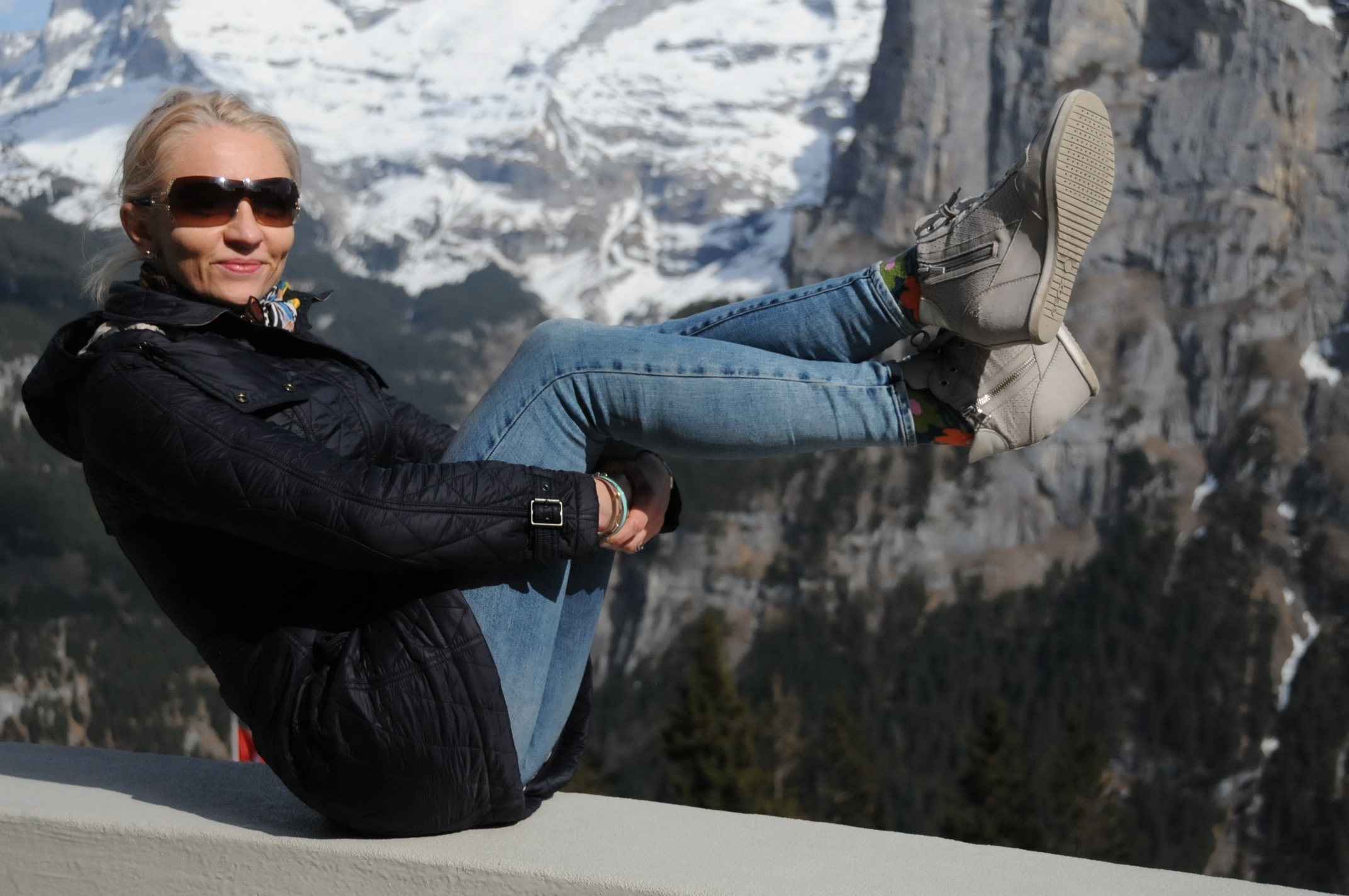 Shower: Pretty good, accept to get in and out you had to play a game of Paper Fortune Teller with the door. The pressure and heat were sublime. 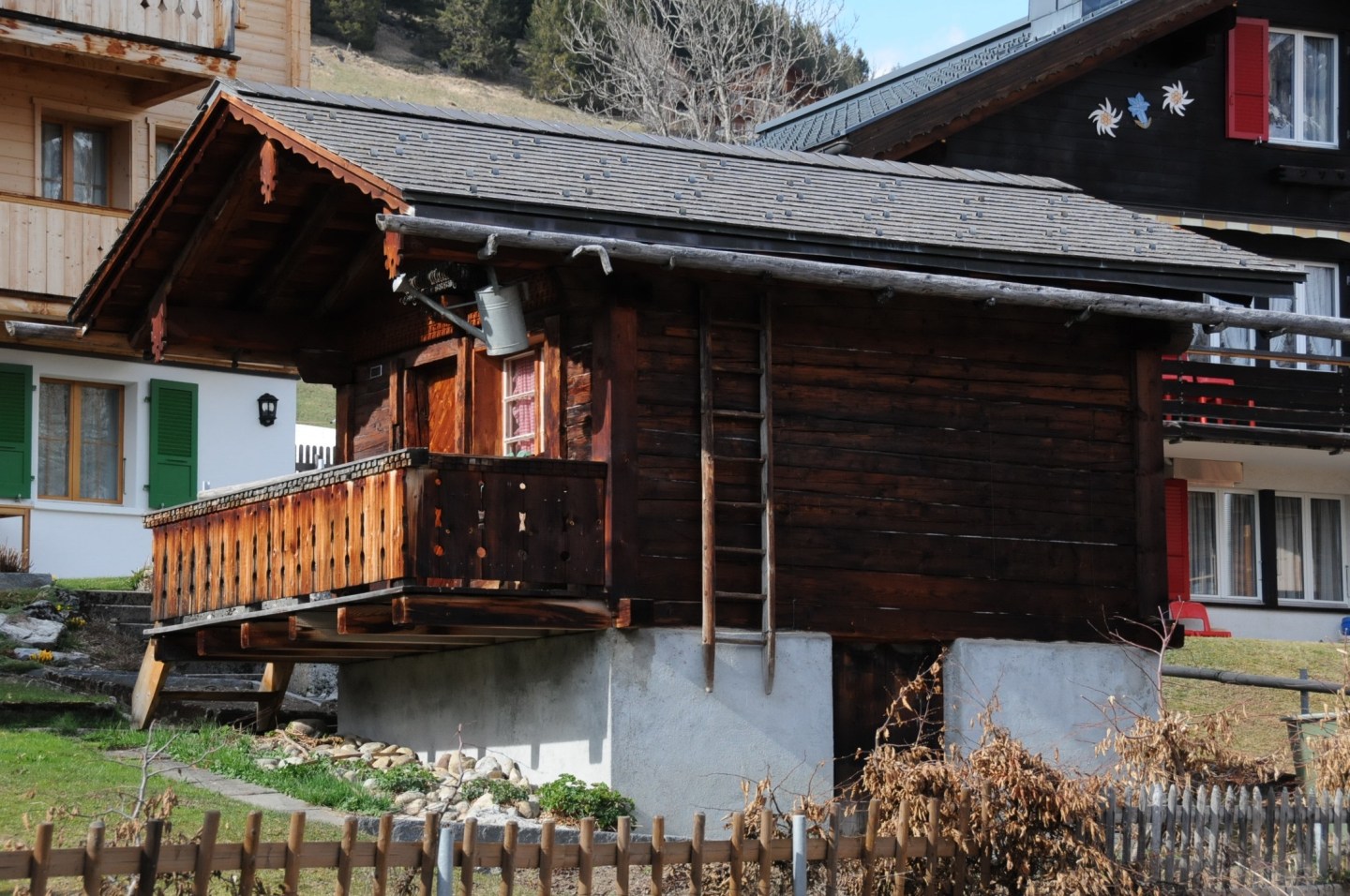 Bed: Joined singles, it’s one up from hotel Ibis budget.

Bar: Cocktails, lack of options, but not to worry. They served beer, and that’s all that mattered. 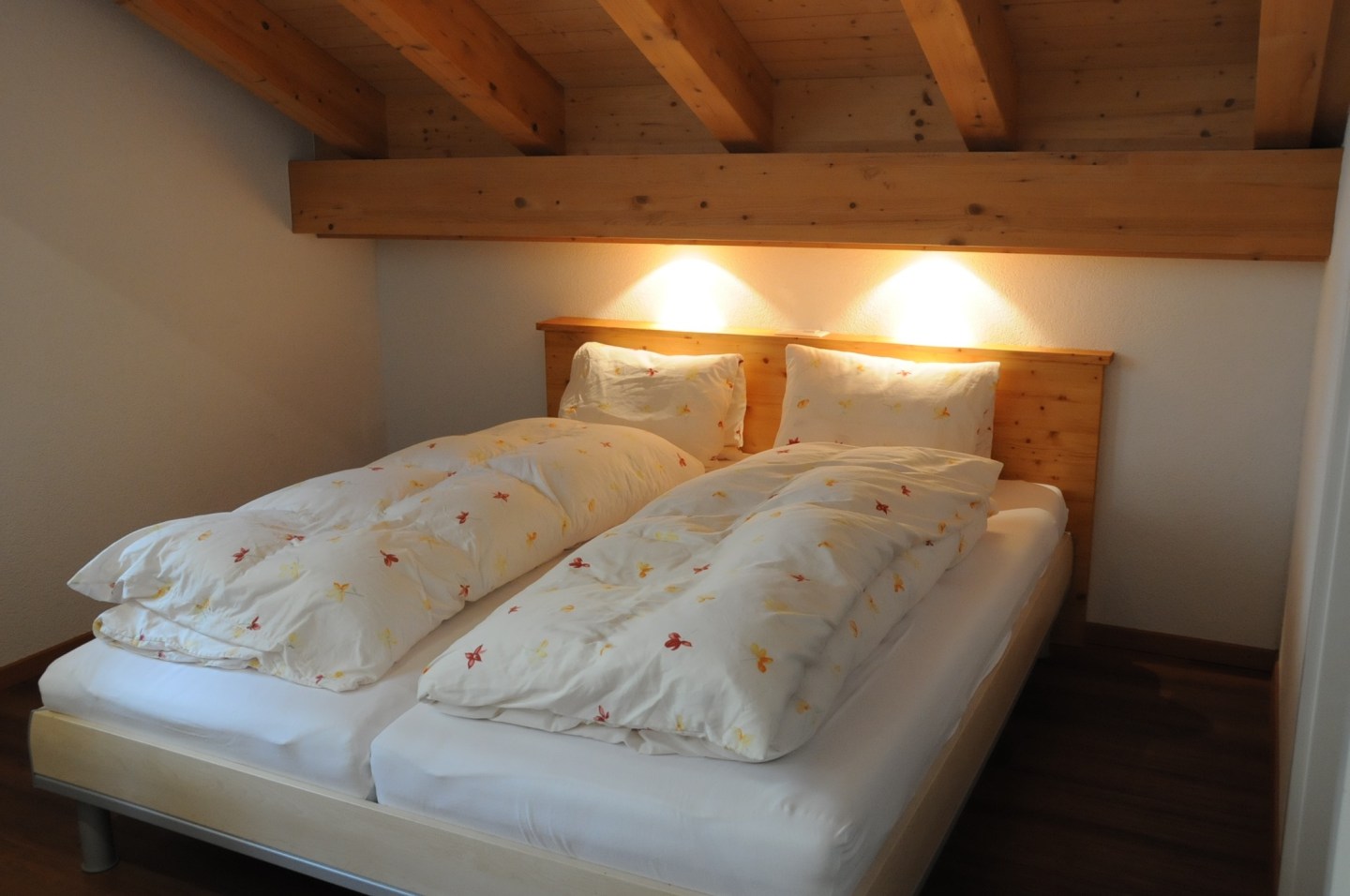 Restaurant: Quite nice, good lighting, atmosphere, Bond sat on the table behind us once and they showed me the picture to prove it. The service took awhile but I’ll award extra points for the beautiful silver-sheened mullet, rocked by the insouciant waiter.

Toilet paper: Drum roll please….. yes they pointed the toilet paper, bravo. But sadly the paper was a little abrasive on the ol’ passage.

Surrondings: You’re in the mountains and in the valley of Bondworld. I’d live in this hotel, happily. We shared a chalet with a family down the hall.. They had two rooms, adjacent to each other, parents in one room and three kids in the other. They left the doors open every night which unsettled me. Supposing I sleep walk with a mighty erection and wind up in a bed that I hadn’t paid for or procured. Imagine explaining that one away to either the missus or the police! 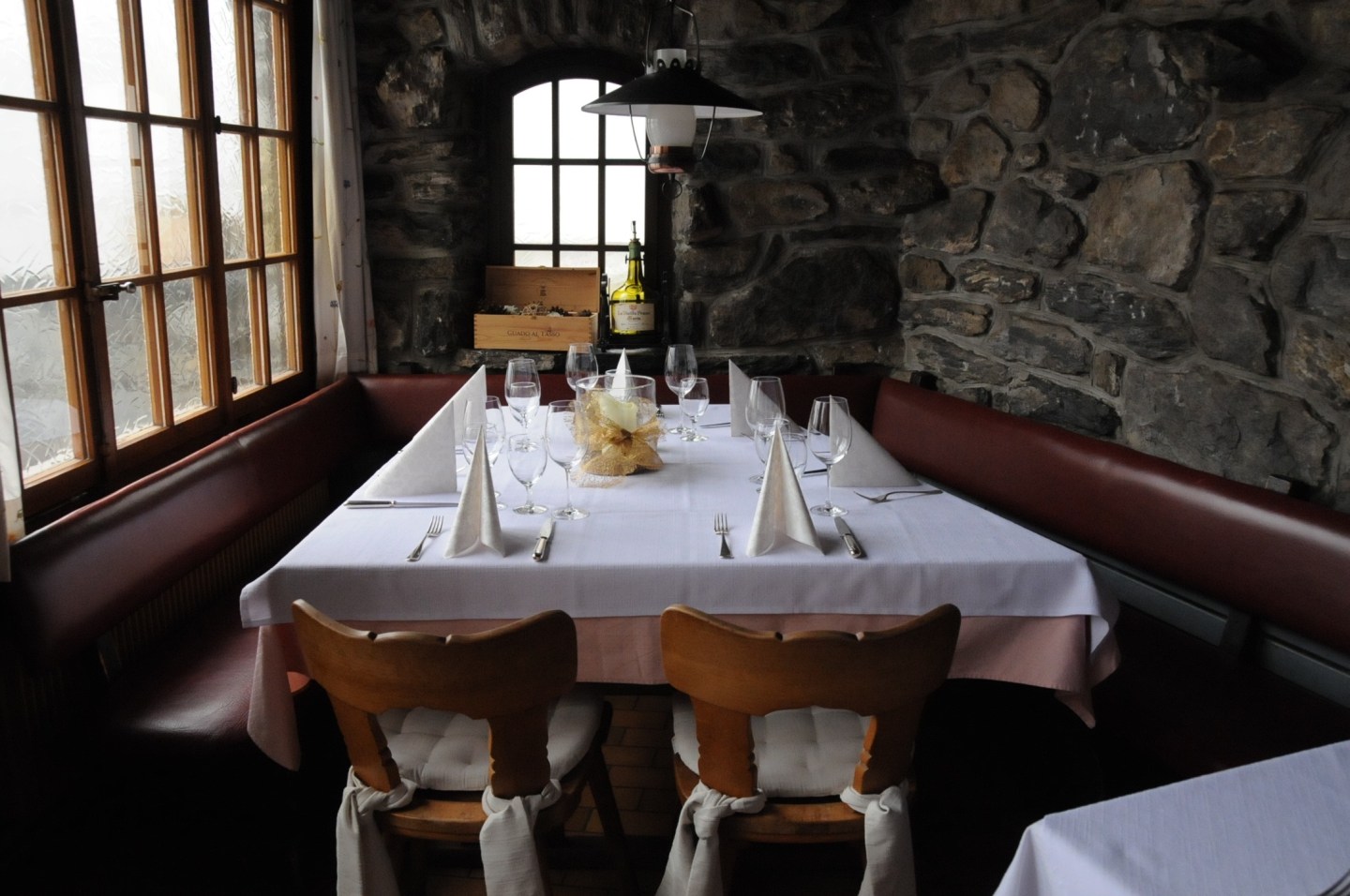 Breakfast: Concentrated orange juice. Looked promising because there was a lot of stuff. A lot of stuff, but not a lot of stuff I wanted to eat. I called it the SKY TV of breakfasts, a lot of channels with nothing on.

Sidenote: This hotel is amazing, owners are sweet as pie. If you’re thinking of going and want to see more of Murren check out our journey around James Bond World in Piz Gloria here.

If you enjoyed this blog you might want to check out the other Bond locations I have frequented on the Where’s Bond Now section of the blog. This blog was repurposed from my old blog written in April 2017. I no longer drink.

The Heraldry of Bond, Blofeld and Fleming.