The last thing that he does in the film is a clothing related moment. 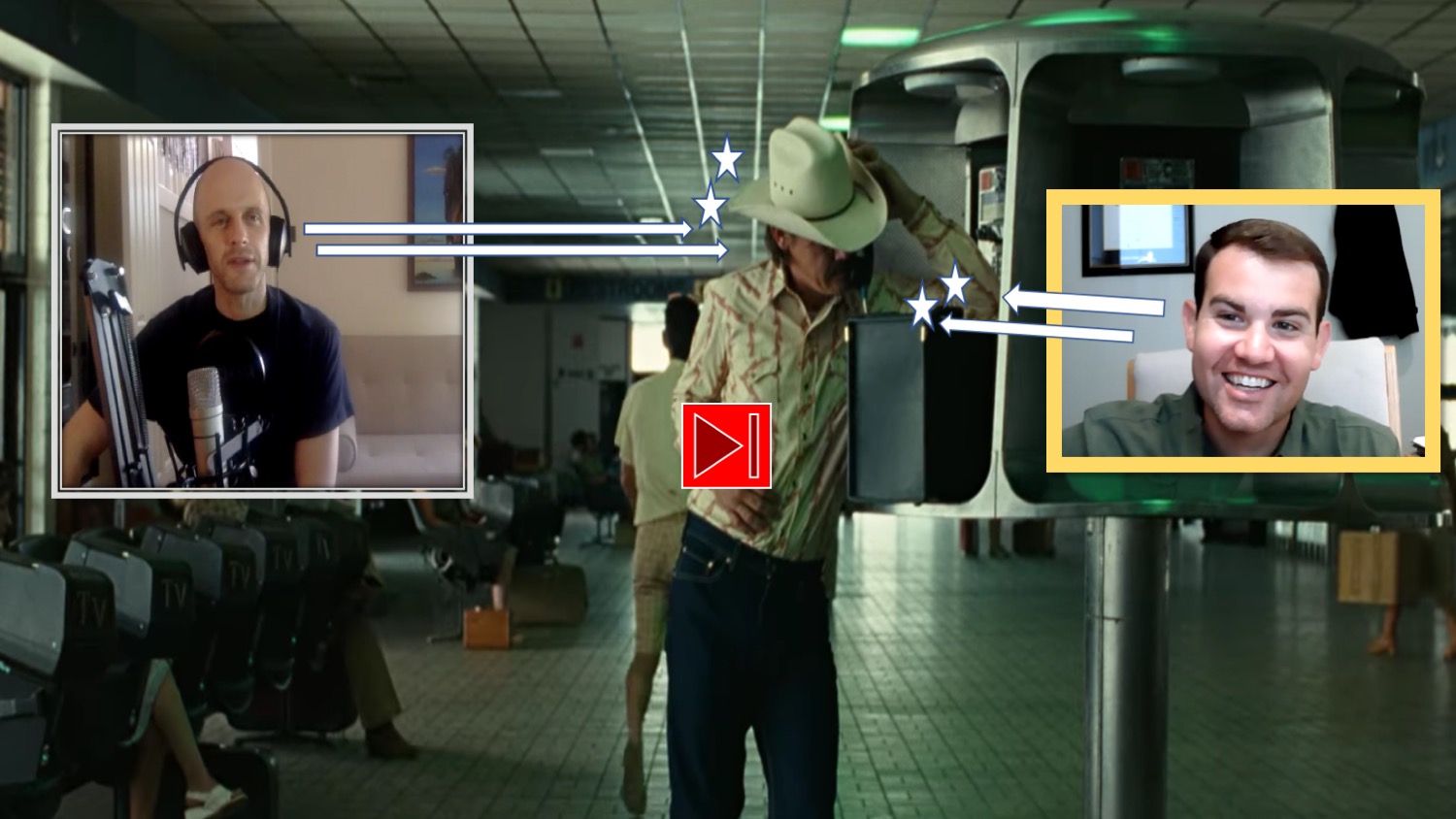 In episode #133 I speak to Kyle Barbeau of EasySmilesAndExpensiveWatches on Instagram about the western thriller, No Country for Old Men starring Javier Bardem and Josh Brolin. The costume designer was Mary Zophres.

Ethan & Joel Coen directed and secured Oscar wins for Best Director and Best Adapted Screenplay. Below are some moments transcribed from my chat with Kyle. The podcast is available to listen on iTunes, Stitcher or Spotify or in the player below. You can also catch our chat on YouTube.

Kyle this isn’t much of a ‘style film’ is it?

No but as you mentioned off-air, this is a film that is stylish without being a style conscious film. That said, I don’t think there is anything in this film I would buy if it came up for auction. Maybe Javier Bardem’s wig.

I don’t know if it is he should fire his barber.

Oh it is. He told the Coen’s after seeing it that he’s not going to get laid for two months. 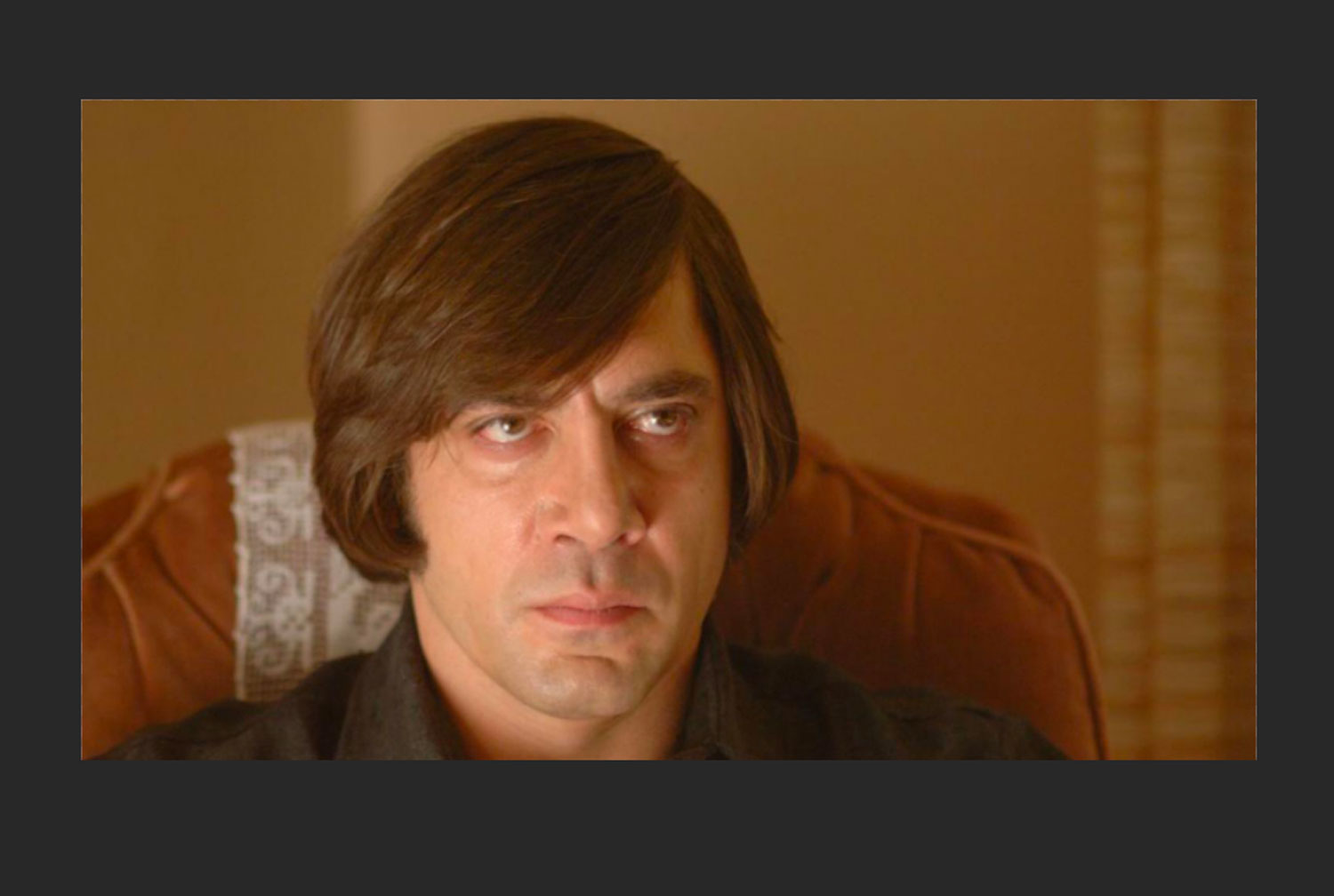 That’s brilliant, and most probably true.

The boots are the most stylish things in the film,  but these clothes are important to Anton Chigurh.

Yeah Anton is very conscious of blood. When he kills somebody, he wants to make sure he doesn’t get any blood on his shoes, or his socks. He’s very meticulous and methodical guy.

You don’t see him in any other clothes in the film. He doesn’t want to get them stained, or else what is he going to wear? He has to get his boots on the bed when he kills Carson Wells.

And the last thing he does is check his own boots when he ‘kills’ Carla Jean. Hopefully he didn’t kill her though.

He very much did kill her. He kills her in the book so we can only assume right? 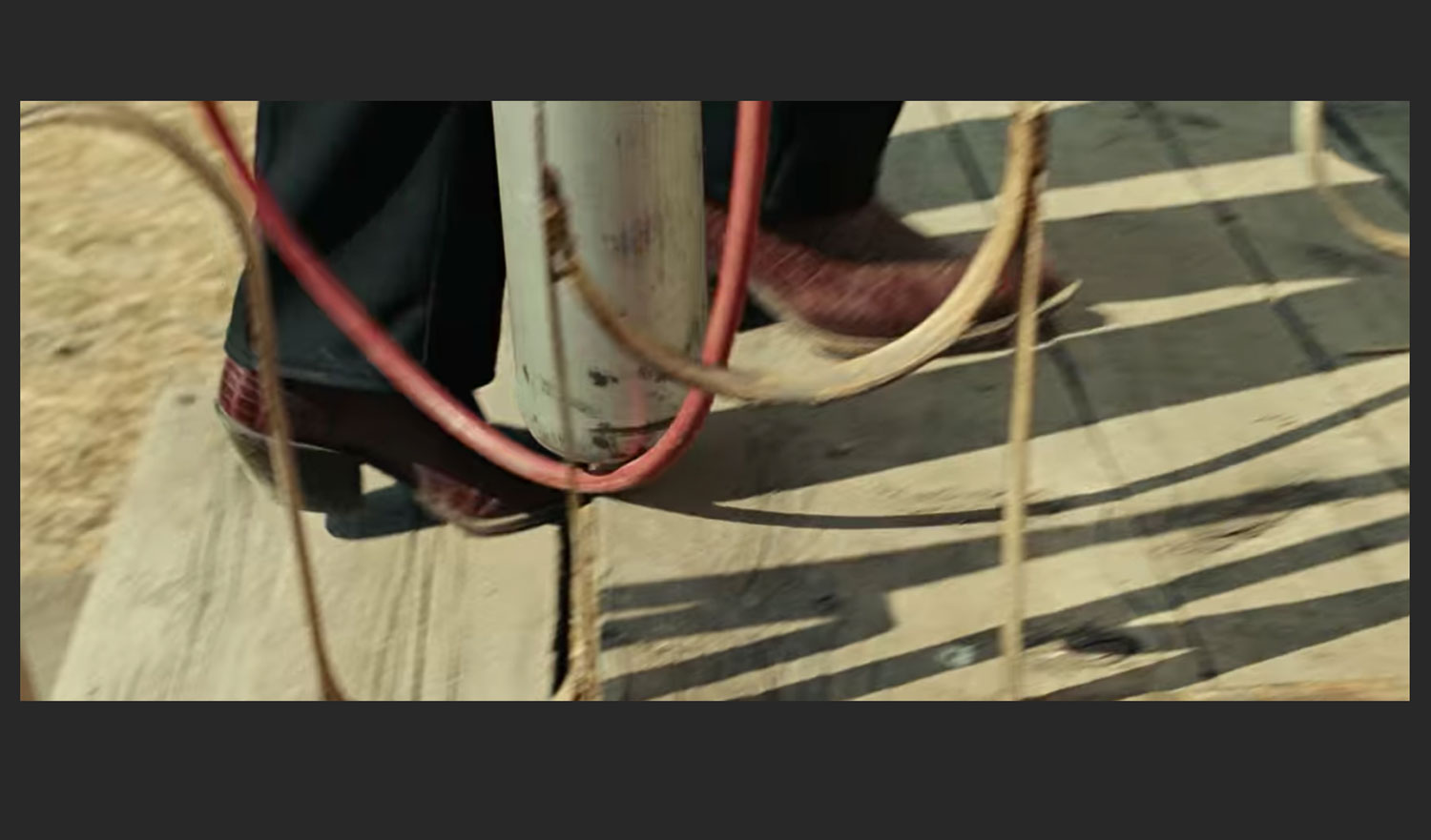 I guess. And the last thing that he does in the film is a clothing related moment.

Yeah when he gets a shirt from the kid, the other kid goes look at that fucking bone man. HAHA. I had a mate predict the ending, when that car smashes into Anton. Real crazy. He just called out SMASH just as the car piles in. Most nutty film prediction I ever saw. Did you see that coming?

Nah that’s weird. And that might have something to do with the film having no music. Sometimes music can telegraph whats happening or going to happen next and in this film there is none of that. 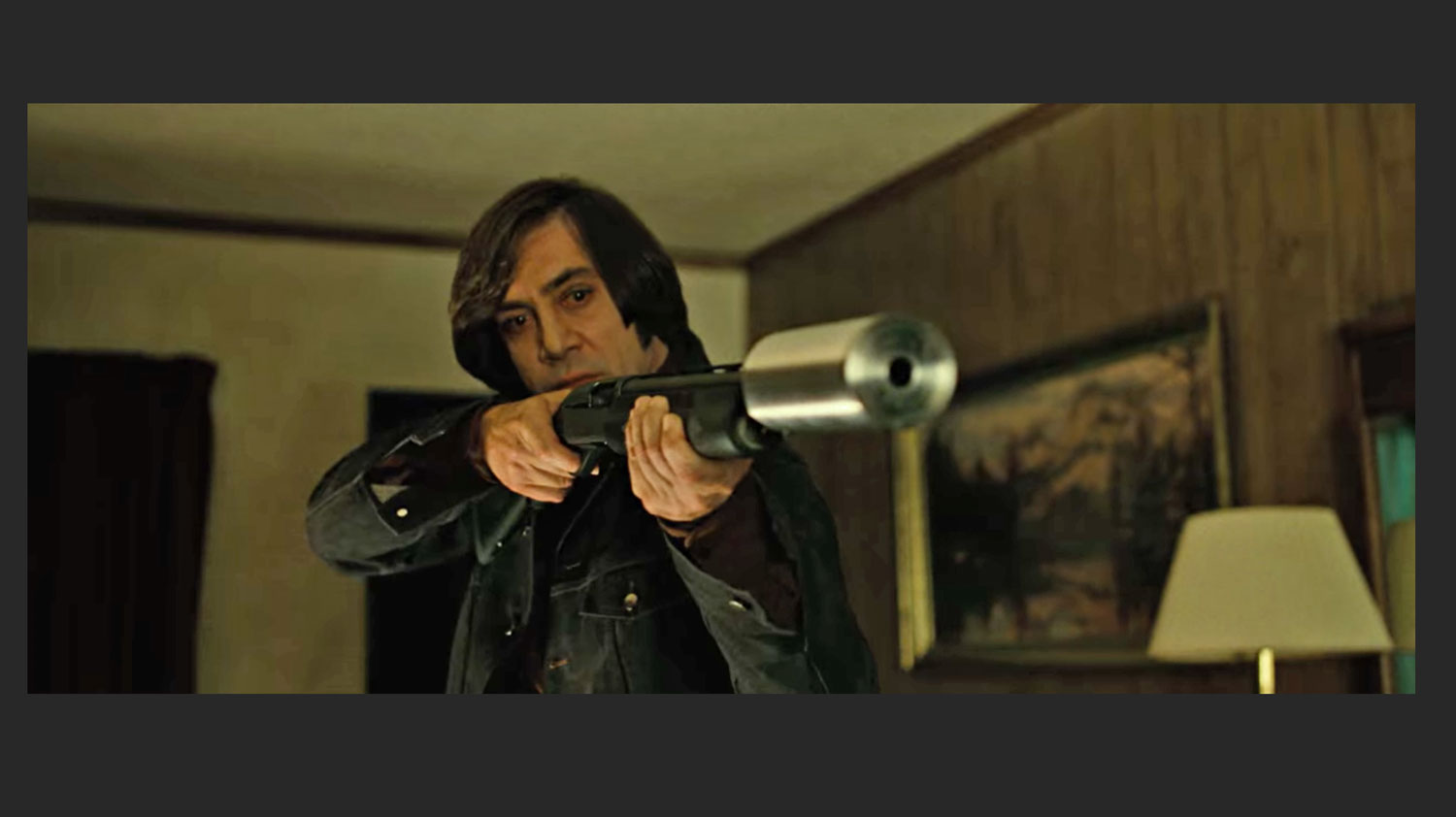 My Very Rough Notes from the Movie

Josh Brolin (Llewelyn Moss) wears a check short sleeve shirt with western flaps on the breast pocket. Brown and cream, this is almost his camouflage as he is in fact hunting (presumably antelope).

Moss is wearing his favoured faded blue denim, can’t quite see the label, presumably Wrangler. In the department store Moss asks for some

‘Larry Mahan’s, a Shoulder (Shoulder is a type of leather and ‘a style’ of Larry Mahan brand boots) size 11,’

and informs the sales assistant that white socks is all he wears. There is a playful call back when Moss comes back in the store bedraggled and half naked wearing those boots. The same assistant asks, ‘how are those Larry Mahan’s working out for you?’ 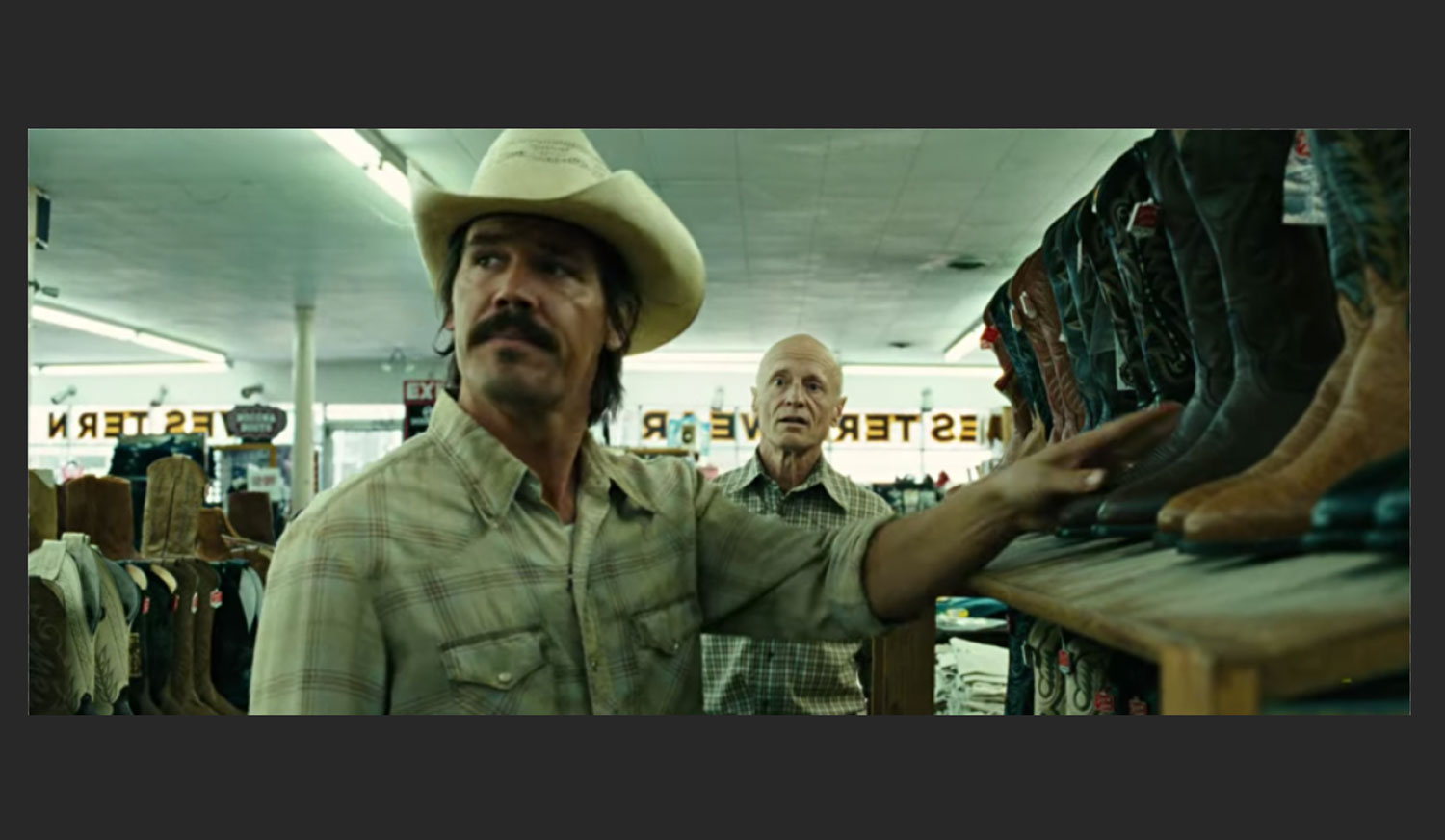 Anton Chigurh played by Javier Bardem has red alligator boots. These are perhaps the most stylish things in the movie. According to Your Props they are Tony Lama Black Cherry Western boots. Everything else is really functional or for utility. Bardem wears a dark indigo jacket with no fades and no branding on the metallic buttons. These are his only clothes throughout the movie.

Bardem looks after these clothes though. He shoots the guy through a shower curtain so as not to get them bloodied.

A recent auction listing on Prop Store has given us more insight into the brand of shirt that Anton Chigurh wears. The picture has an Anto Shirt’s label inside the collar. The listing is described as, 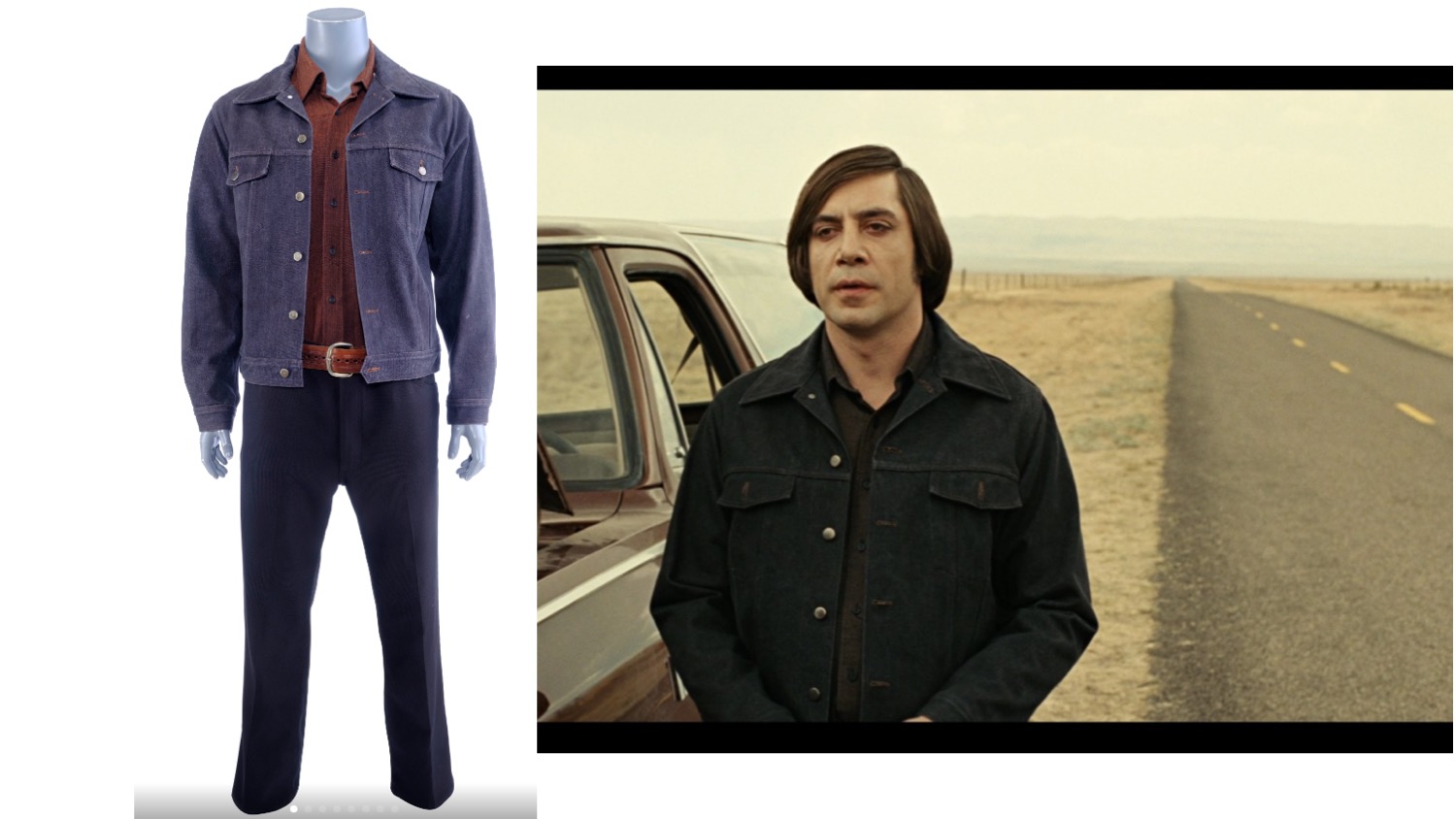 What about my hair?

No the boots are no longer made. The brand is going on but only in hats for now. 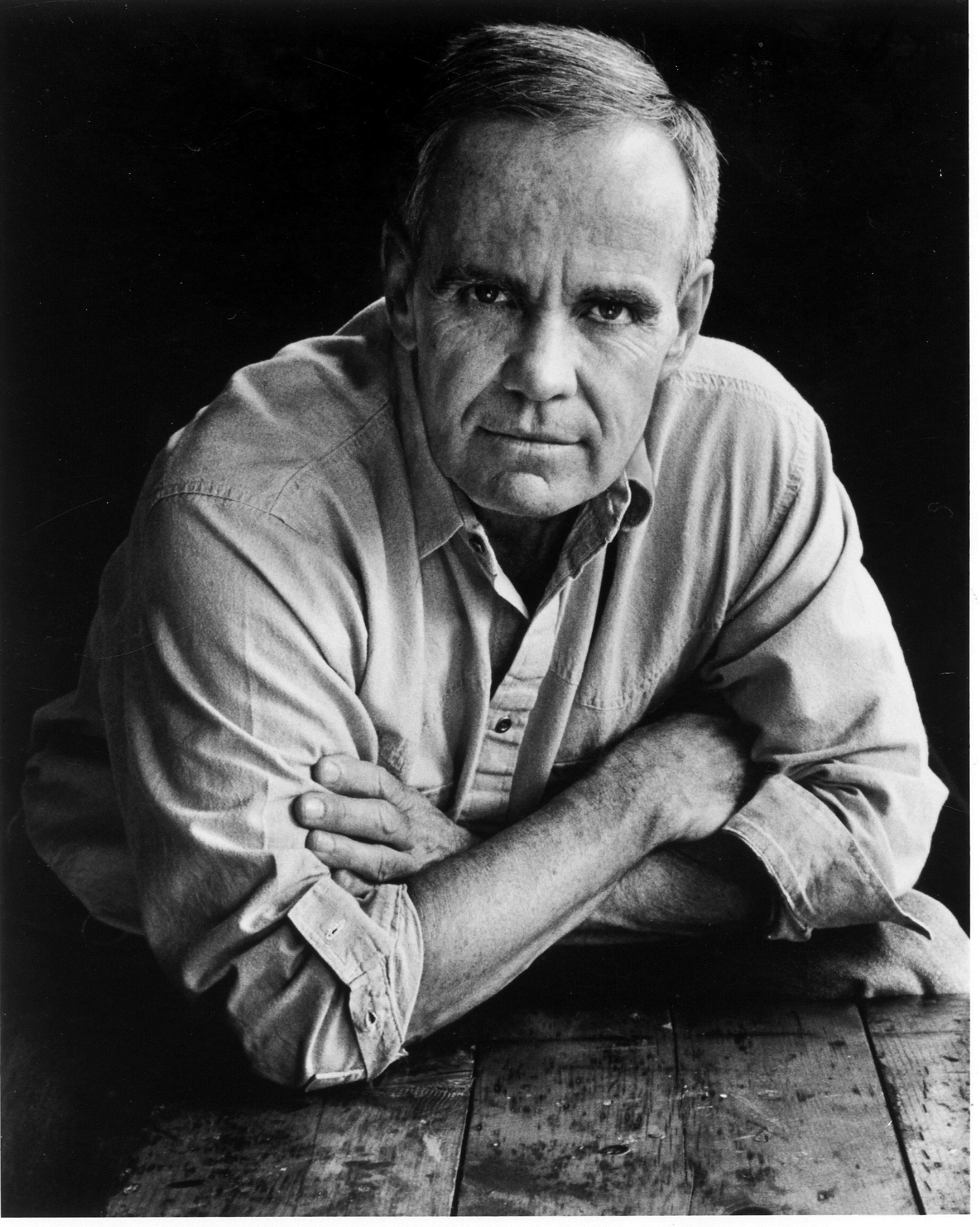 Style references in the book

When Moss is needing a new wardrobe after discharging himself from hospital he seeks all his clothes, including Larry Mahan’s, from Walmart. Carson Wells wears expensive Lucchese boots.

From my Friend in Texas

My boots are custom boots from ML. Leddy’s in Fort Worth Texas. They come down to Houston a couple times a year and they draw an outline of your feet and make the boots completely custom.   Mine are orange ostrich with red tops and blue stitching. In my opinion, ML Leddy’s makes the best boots out there. My Leddy’s are the most comfortable shoes that I own. 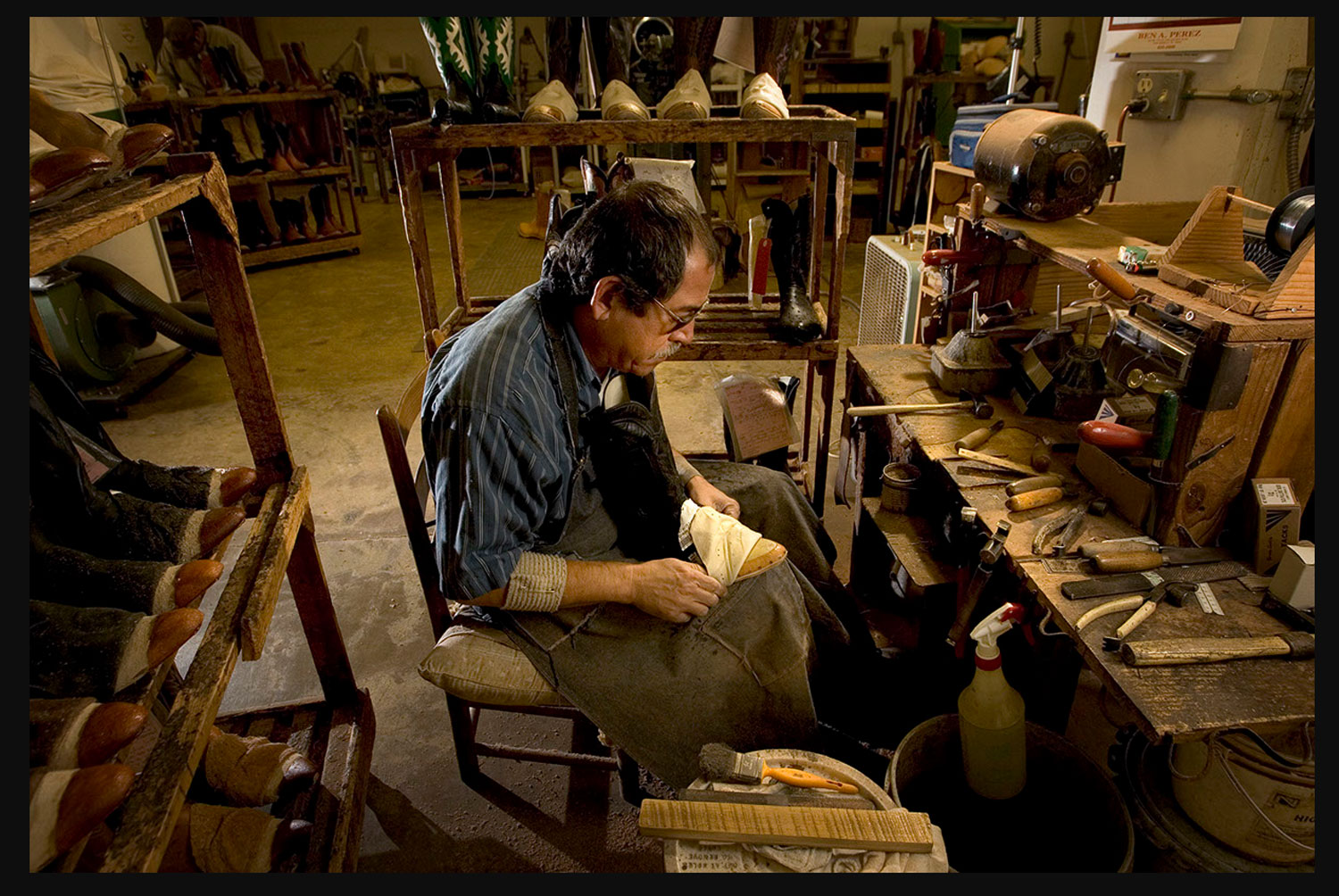 My feet are strangely shaped (size 13 but like A width) so it’s really hard to find good fitting boots. Lucchese is what rich city slickers buy to look fancy at the rodeo. There are some other smaller boot makers that people go to include Rockbuster in El Paso, Parker Boot Company in Houston and Littles in San Antonio. I’ve never owned any boots from those places but some people prefer the smaller makers. 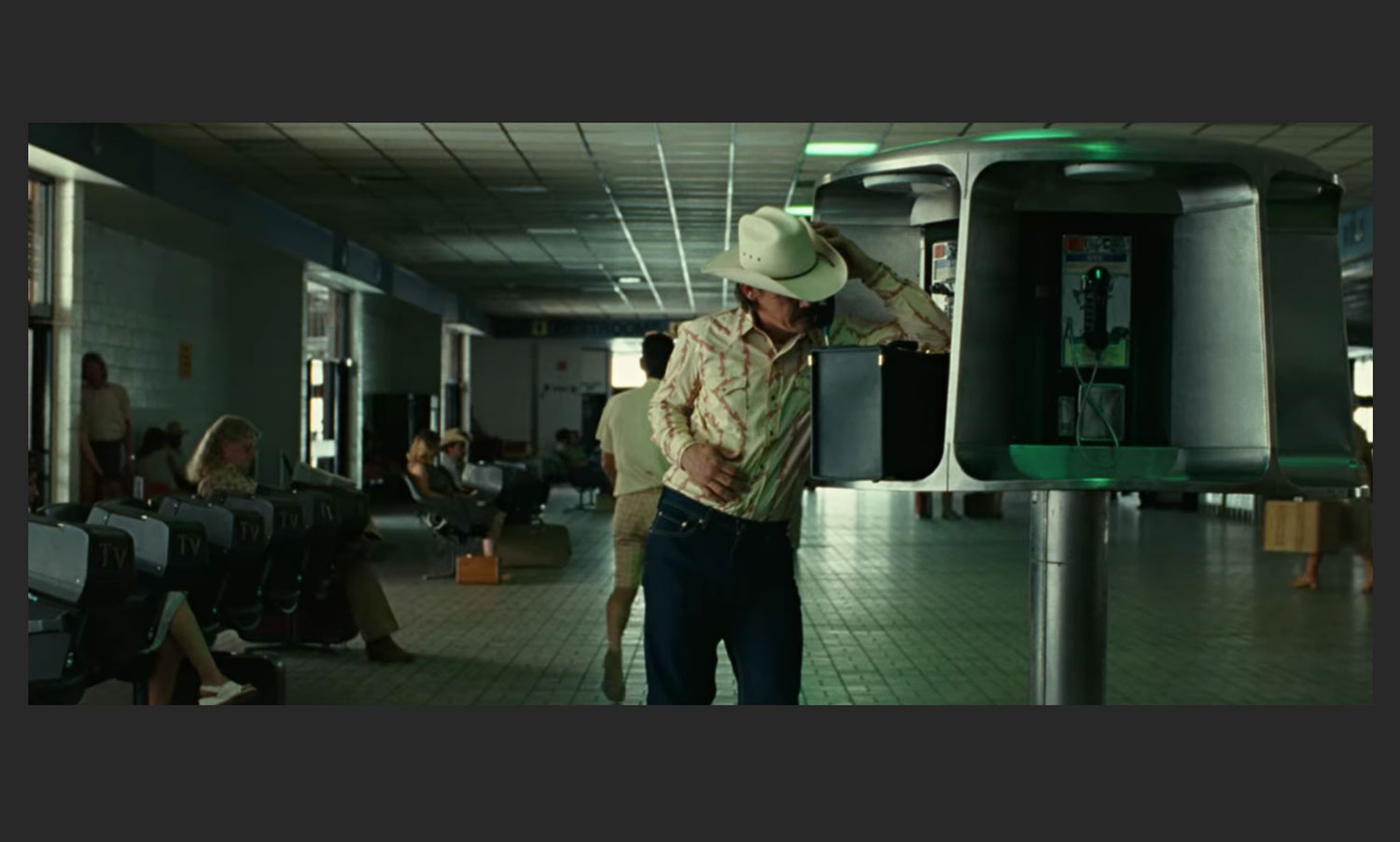 I’m Tweeting About This

This Sunday we’ll be talking about the style elements of No Country For Old Men. Have a good weekend ya’ll. pic.twitter.com/N9NyxFcYjw 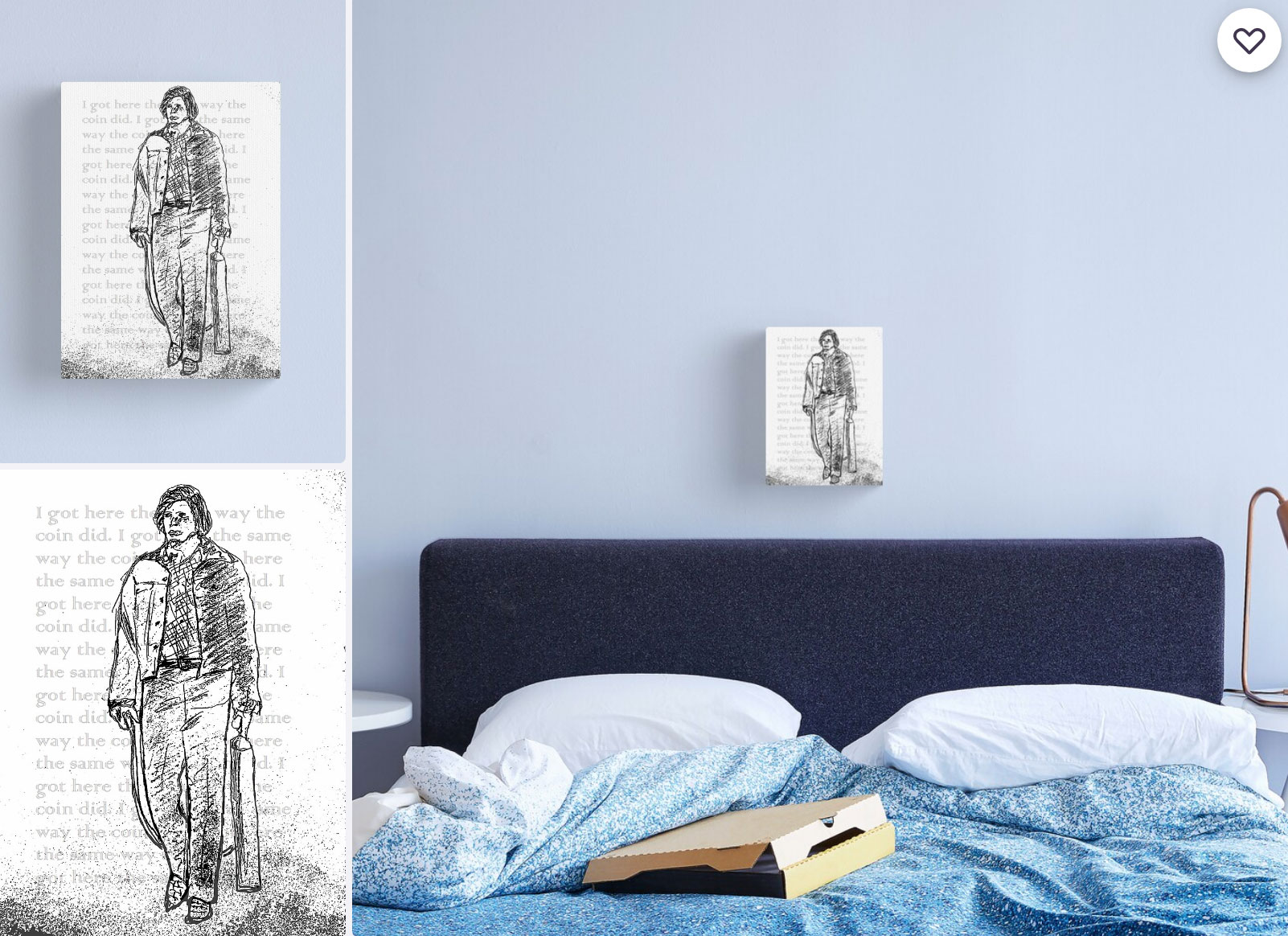 Click to buy some Fan ‘Art’ on our Redbubble page

Feel free to support the show by buying some original fan ‘art’ on our Redbubble page. Check out the shop part of the blog to see more merch.

No Country For Old Men is based on the book No Country for Old Men by Cormac McCarthy (published in 2005) and available to buy on Blu Ray. Next on my reading list will be The Coen Brothers: Interviews (Conversations with Filmmakers).