I find that my greatest pleasure is in the initial conversations with actors to really put our heads together. Like I say, we are partners in creating this. I’ve been really lucky, I’ve been doing this a long time, and I still love my work and love actors. 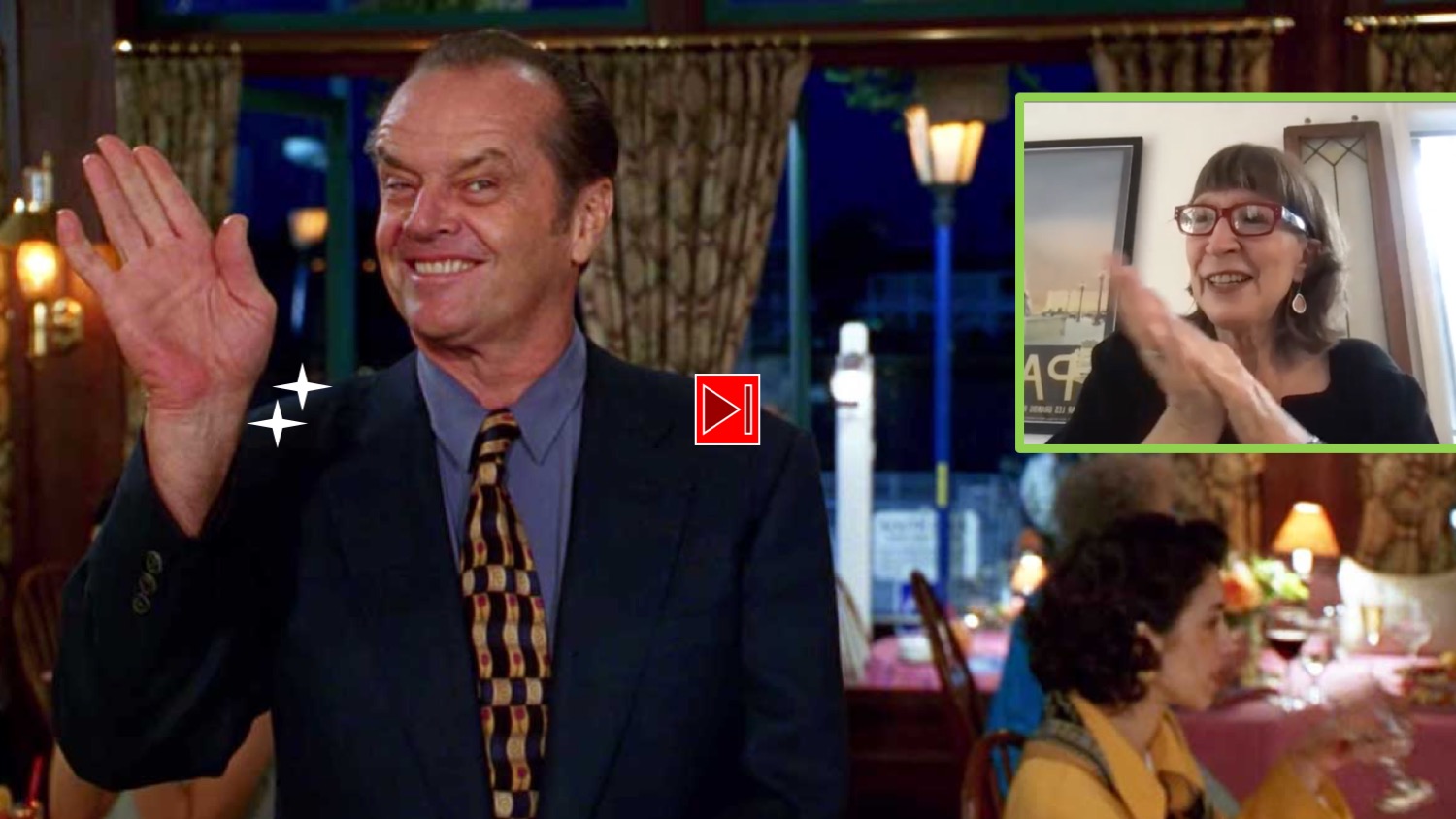 Costume Designer Molly Maginnis talks dressing Jack Nicholson, John Travolta and Ben Kingsley. How wonderful it was to talk to Molly and get to hear those stories about her career, and especially for me to hear about those stories of working with Jack Nicholson. I reached out to Molly as she worked on one of my favourite Jack Nicholson films As Good As It Gets.

PB: (Pete Brooker): Molly Maginnis, where did it all begin for you as a costume designer?

MM: (Molly Maginnis) I started long ago, from high school to college thinking maybe I would go into fashion design. And I used to love acting as a kid. So I was always acting, I went to college. I went to Washington University in St. Louis. I was in the art school. And I took one fashion design class and said, This is not for me. But I continued to act in plays. And it kind of came together my interest in clothing and storytelling. I asked a professor, could I design a show? And he said yes. And they actually hired someone to help me. So I got the bug there. I went to Carnegie Mellon for my master’s degree to study costume design and went to New York, started designing theatre.

PB: Then you found your way to Broadway right?

MM: I did anything and everything that I could and I finally did a production of Showboat on Broadway. That was kind of a culmination of many years and I segued into designing Opera and Ballet, which I just loved. But I wasn’t really able to make a living. And I’ve always been into movies . So I wrote to every costume designer in New York and said I would love to assist you. I ended up I assisted five different designers on films, and I learned so much from each person. And a very well-known designer Ellen Mirage, Nick and I had assisted her and she helped me get my first movie, which was a teen slasher movie in Miami called The New Kids with James Spader and Laurie Laughlin. 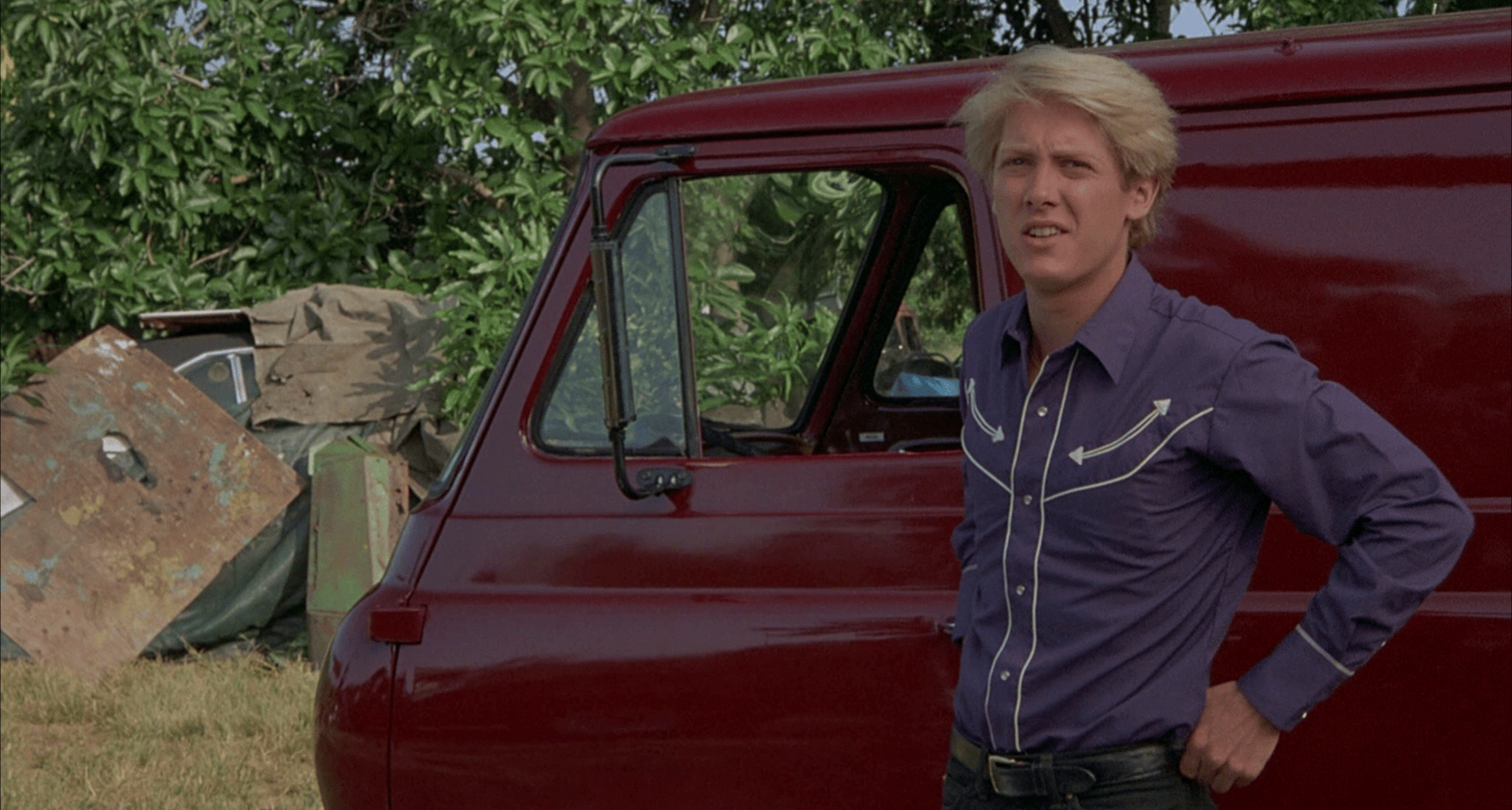 PB: How did that turn out?

MM: I mean, it was unwatchable. But it was a union film. And I met people there and that was my first entry way and then people I have assisted, really helped me move on. Christy Zia, I assisted her, she wanted to segue from costume design into production design. So we ended up doing a movie called Lucas, that was her first production design and brought me in to do the costume design. I had help from other costume designers, which is always on my mind; we need to mentor each other and give it up for the next generation. But that’s how I got my first start. And then Christy was doing production design on Broadcast News. And she introduced me to Jim Brooks, who hired me and as I did that, and because I did that, I did As Good As It Gets for him.

PB: And what was Jack like to work with?

MM: I got to work with him three times, and I admired him tremendously. I mean, really, really a dedicated artist, loved clothes, love the meaning of clothing. And, yeah, so he was a great partner to work with.

PB: And you got to design costumes for John Travolta on Look Who’s Talking, and this was considered his comeback. Many people believe Pulp Fiction was his comeback. But it was this one that reignited his career initially. Did you have any memories of working on that film and working with John at that particular time?

MM: Well, you’re absolutely right, he had had a real low in his career. And this just boosted him back as a real audience favourite. John was a lot of fun to work with. He too loved clothing. He was also trained as a dancer, or a singer. So movement was really important to him and my background, having made costumes for ballet and modern dance, I really understood how clothes need to be constructed for someone. Which later when I did Smash, it also helped me out. But yeah, he was just, I mean, this is a long time ago.

(The Look Who’s Talking trilogy is available to buy on DVD through Amazon). 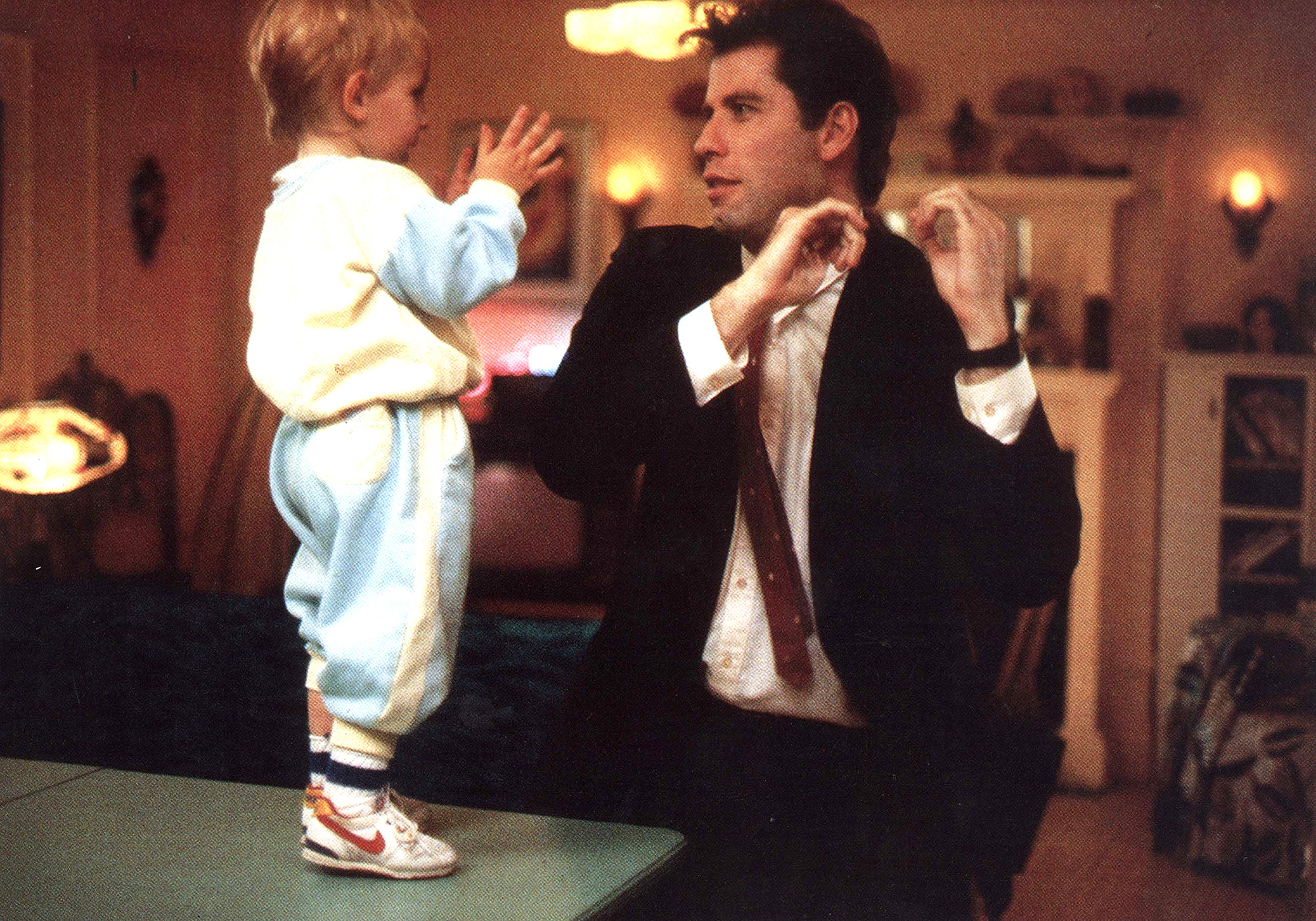 PB: But John Travolta was a nice guy right?

MM: Yeah, he was a lovely man. I remember he had a rented a house and Rustic Canyon. And I’m not sure where his wife was. I mean, tragically, he had a very ill child. And I’ll never forget, I had to do a fitting with him. He called me and he said, Would you mind terribly coming to my house, because I can’t really leave my son alone with the sitter. Someone needs to be here. And it really impressed me because it wasn’t just like a big ego thing.

I’ve worked with stars who you go to their houses, they don’t give you a drink of water. But, John was a lovely person. And yeah, a real artist. I mean, we had so much fun. I remember, his shoes were really important to him. And I can’t remember the date of that first movie, but finding the blue suede shoes was like a whole thing that we went through. And, yeah, I mean, I’m not sure what else to tell you. Other than it was a pleasure. I get to do three movies with him. Just a good partner.

PB:  When you’re making clothes for people that have to move, is there something technical that people need to know about that? Is there like a certain fabric you go after?

MM: 100%. I really, I mean, when I first moved to New York, after school, I went to work in a costume house actually making clothes. And I didn’t have that much experience. But I remember there were all these Italian ladies and tailors. They didn’t even speak English, but they go and they show me something and I go, Oh, yeah, and I ended up working as what they call first-hand to the tailor. It meant he would make the pattern and then I would cut the fabric and hand it off to the machinist to the hand sowers. I would be at every fitting and we were doing the American Ballet Theatre. The Joffrey Ballet. It is incredibly important, how close the seams were, where stretches important.

PB: What do you say to folk who ask you how to become a costume designer?

MM: You know It’s how clothes are made. So I always recommend when young people say, Oh, I want to be a costume designer. I always feel like you need technical knowledge, historical knowledge, and literary sensibility; how to read a script. I always read a script as if I’m acting every part. So when I go into a fitting room with an actor, I’m talking about this story, and how we advance the story of who they are without overdoing it or under doing it. Just so it feels natural.

MM: I think a lot of people are what I would call a stylist. They’ll see this cute dress from Saks Fifth Avenue. And just because they like the dress they’ll think, ‘Oh, this is really cute.’ But to me, it’s like, well why is she wearing this $1,000 dress when she’s supposed to work at Walmart? What’s happening? Where’s the story here? I’m looking and going, something’s wrong.

PB: Do you get frustrated when you watch films and the costumes aren’t matching the story?

MM: I’m disappointed when I see films and television where the clothes don’t have any purpose or tell us anything about the character. Or they’re contradictory to what the character should be. Because I think no matter what kind of training you have instinctually you will feel something’s wrong. Something’s not honest about it.

I mean, it’s hard sometimes to have your convictions of what it should be. You’re trying to bring the actor along, tell them the reasons why you want it and why you think it’s right. But I think it’s really important that you have thought about those reasons, not just going shopping and said well Oh, this is so cute.

PB : Have you ever been star-struck by anyone you’ve designed costumes for?

MM: No, I  always have to tell myself that when an actor is coming in, everybody puts on their pants one leg at a time. So I’m not overwhelmed with anxiety about a major start coming in. I’m ready. I’m prepared. I have good ideas and I’m going to present them in a confident way.

Some people really just put themselves in your hands because they don’t know a lot about clothes. Can you imagine your face is like 100 feet on his screen. How much that must weigh on anybody, any normal person is going to feel like I need to be sure we’ve made the right decision. 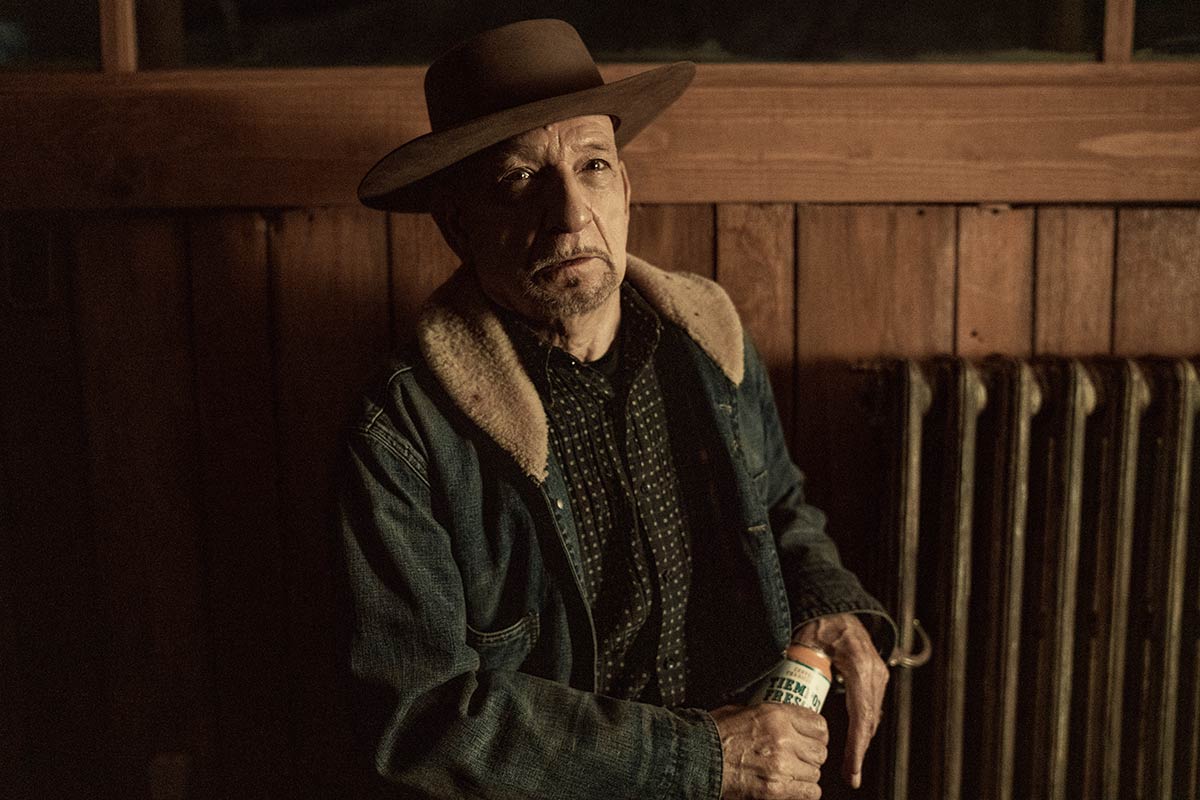 PB: Tell me about working with Ben Kingsley

When I did this show with Sir Ben Kingsley (Perpetual Grace LTD)  I went to international silks and rowland’s in Los Angeles. And they had bought like a building full of vintage fabrics. And my idea for the show was that there would be a timelessness about it that you couldn’t really put your finger on what the date was that has the sort of Western feel to it. I ended up making so many things, men’s shirts, men’s suits from these vintage fabrics. That was a lot of fun.

MM: When we did the Bucket List. Jack came to the set one day and he brought his own t shirt, which was Harley Davidson Moscow. He’s like ‘Moll, I think I want to wear this.’ And I’m like, okay, so I called the legal department at Universal. And I said, Listen, Jack wants to wear this T shirt. And it’s Harley Davidson. It’s Moscow. And they’re like, you have to tell him, he can’t wear it till we clear it. I said, you want to tell him, then come down here. You know, that little movie he made about the motorcycles on the ride?

I said Harley Davidson could be so thrilled that he would wear their t-shirt. So sometimes Jack would surprise me and he never brought something just because he thought he looked good in it. He felt like this really said something for this moment in in the character’s life. So yeah, I mean, doing costumes is a very organic art form.

With thanks to Molly Maginnis, be sure to check out her filmography and portfolio on her website.

As Good As It Gets is still top of my list, on any list. It is available to buy on Blu Ray now.