As Good As It Gets – Jack Nicholson’s Dinner Date Jacket 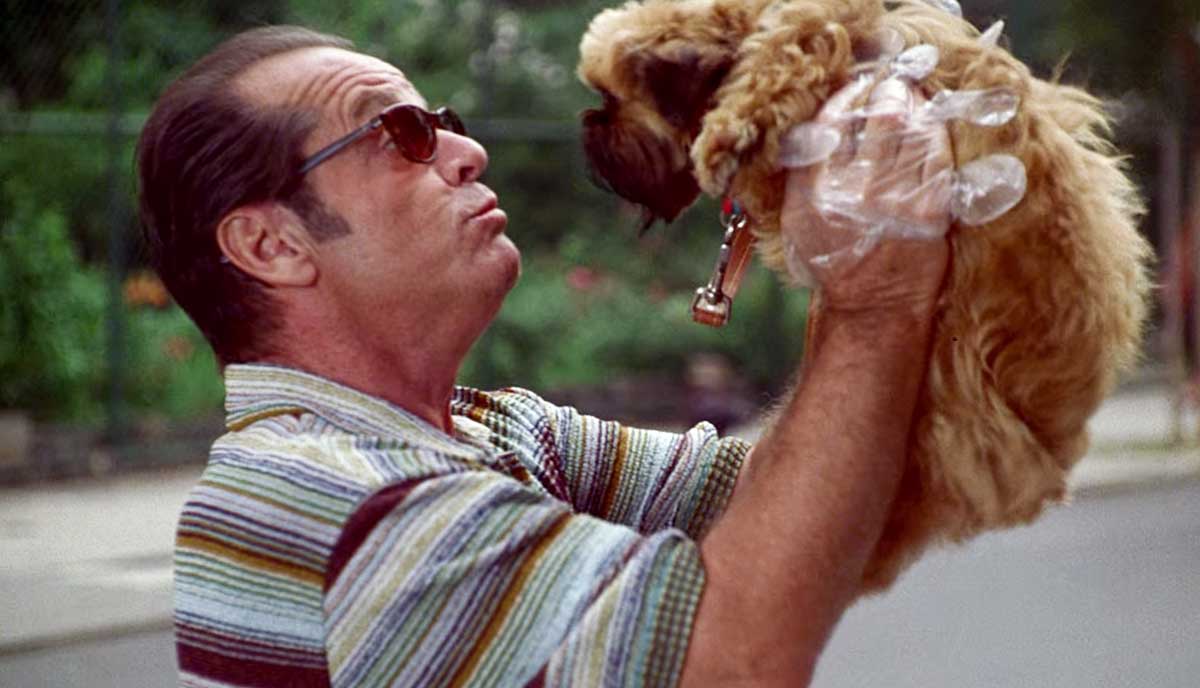 As Good As It Gets

‘We bought a few things from them (Missoni) that were really high end fashion but completely unique. Nothing you would ever see anywhere else. What I was trying to do with him was that he had this heart of an artist, a little bit of boyishness hidden away, you know when he falls in love. How he goes after love and friendship. Yeah, there were a lot of things that we talked about and Jack is very analytical. So he was just great to talk to about clothes. And yeah, it was fun. It was just fun.’ – Molly Maginnis.

Jack Nicholson is Mervin Udall, a misanthropic germaphobe. Nicholson delivers an oscar winning performance in As Good As It Gets (1997). His wardrobe is enlightened with prime coloured polos and oversized shirts with curious prints.

According to IMDB, Jack Nicholson helped create Melvin’s wardrobe. He and costume designer Molly Maginnis wanted a “downtown” look. If you haven’t seen the film it’s available to buy on Amazon. 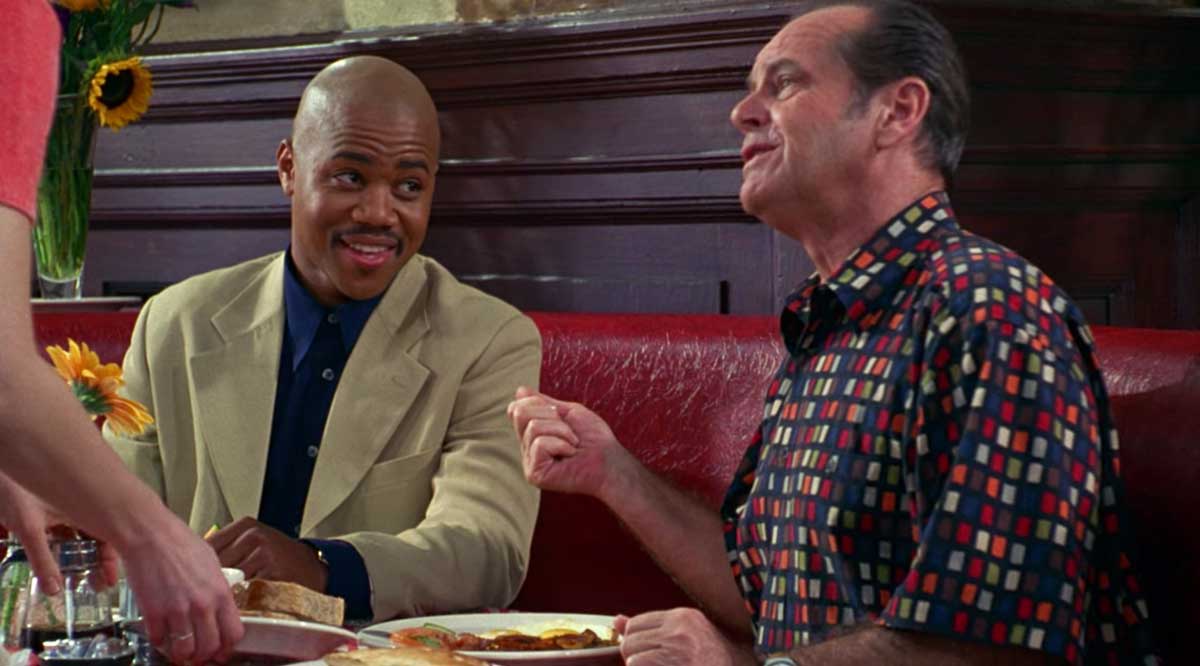 The stand out shirt (above) can really be described as a black short sleeved shirt, adorned with geometric paint dabs of greens, blues, whites and oranges. Much like if you laid out all the faces of a Rubik’s Cube next to each other in a flat lay.

In the same scene Cuba Gooding Jr (we’ll introduce his character later in the blog) wears a light stone-coloured suit with wide notched lapels. When leaving he does up the third button on the jacket. I’m sure he did so to fit the rhythm of his leaving speech, but still it’s considered a fashion misstep to do up the bottom button of a single breasted suit. 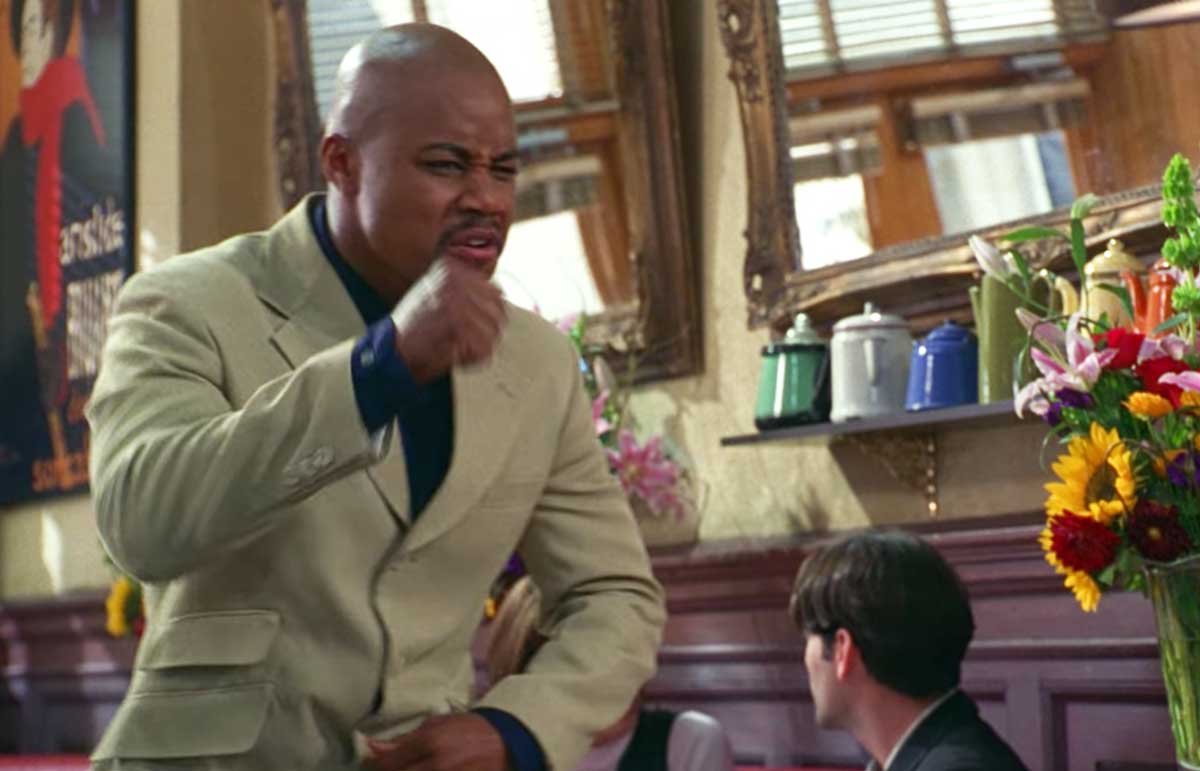 Melvin is smart-casual throughout, but he arrives at the Baltimore restaurant underdressed. The restaurant requires a jacket and tie. The thought of wearing a rental repulses Melvin who likens the idea to ‘being injected with the plague’. 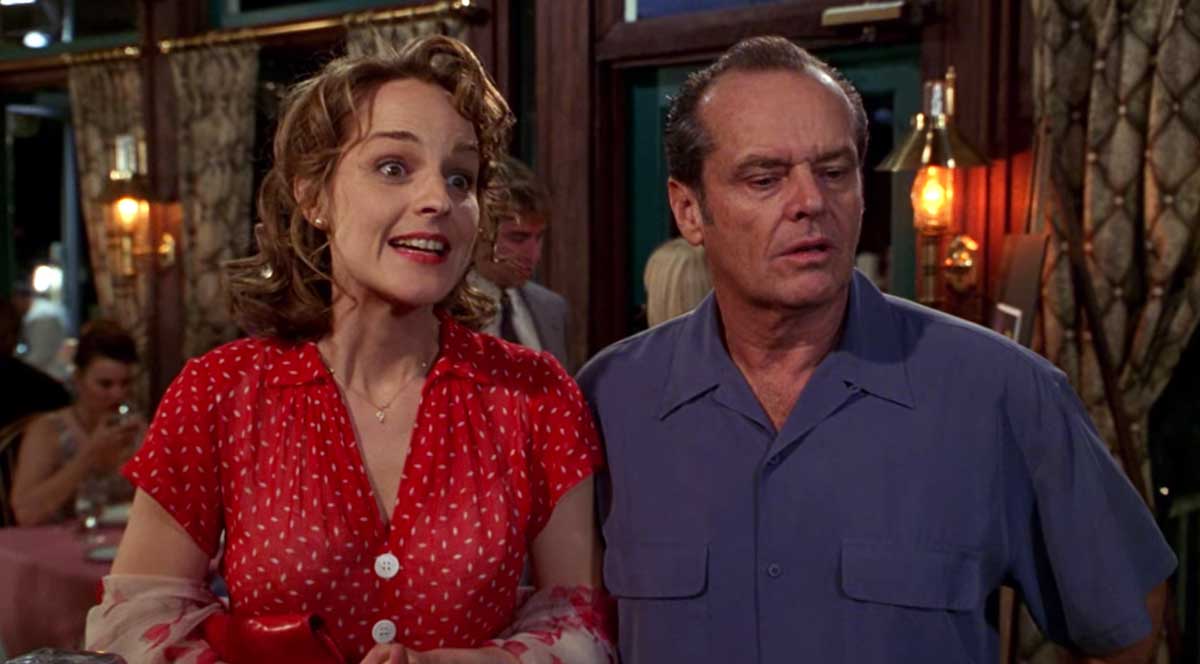 Jack wanted to do two pockets on each shirt. So I know I made a lot of shirts for him. I designed them and someone who actually has far greater skills than myself (made them). – Molly Maginnis.

He quickly aborts his date Carol, played by Helen Hunt, and dashes into town to buy a jacket and tie especially. Interestingly he keeps the blue short sleeve shirt, and it works well with the outfit. The medium thick woollen notched lapel jacket is evenly paired with a chequered black and gold tie, intersected with swirls and rose motifs.

It’s in this scene that Carol falls for Melvin. It goes to show what the power of clean dressing mixed with a great compliment can do for ones fortunes. And of course, that incredible Nicholson voice. 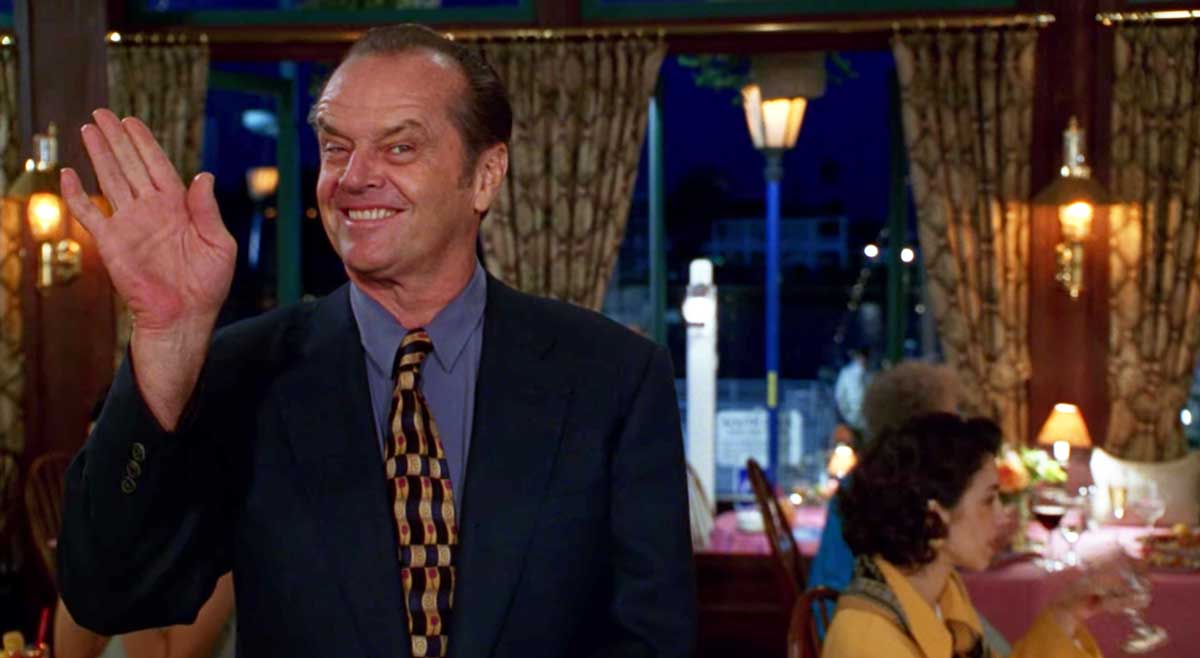 ‘We went through quite a few neckties till we found the one that felt right. We wanted something very strong. Like almost a like, I think digital feel to it that it was an important tie. I would say I can’t remember the word to use but it was something like we need an important tie here.’ – Costume Designer Molly Maginnis. 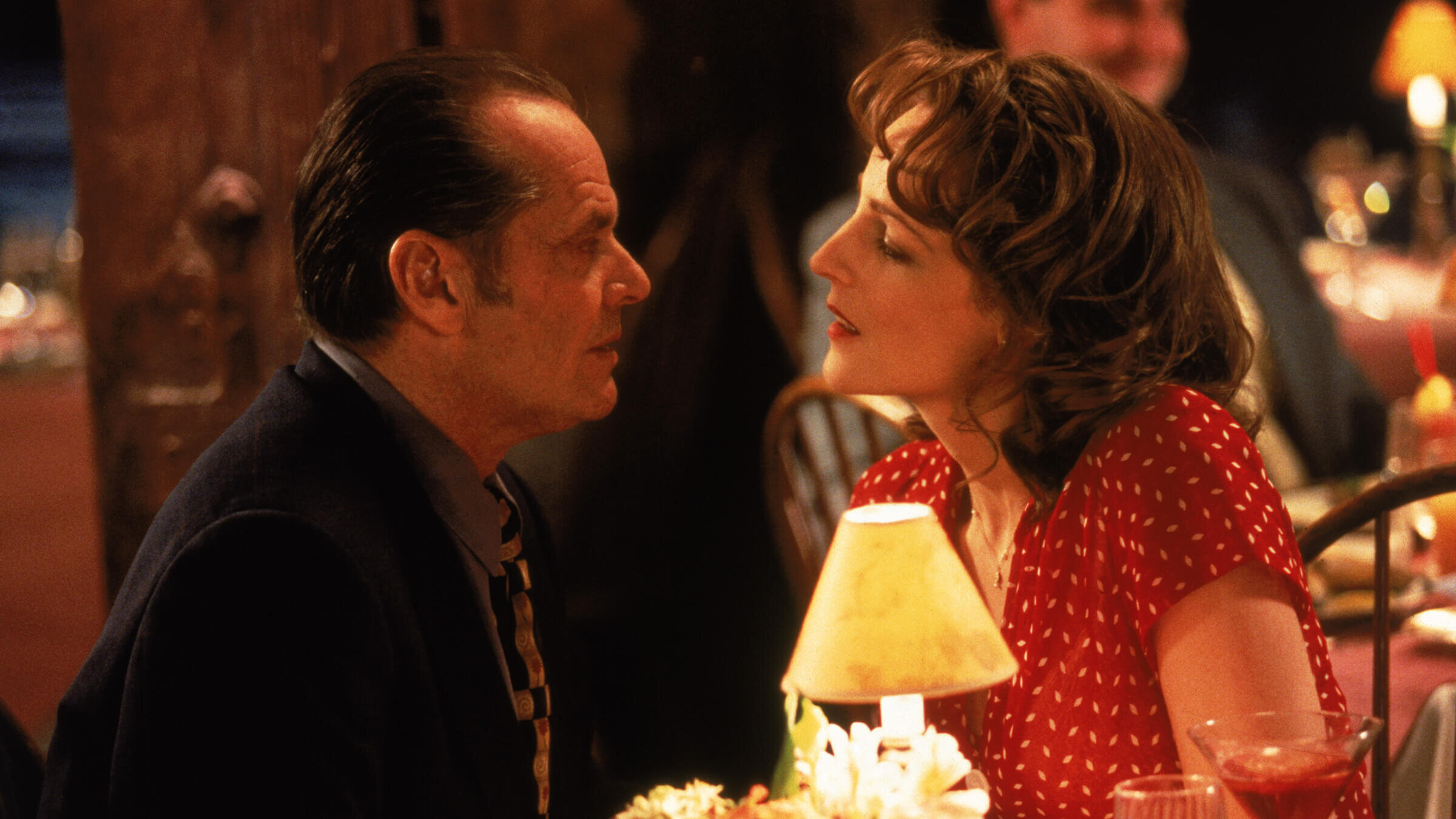 Described by Tie Another Day

The tie can be described as a quasi checkerboard tie in a sort of a Marjhong game pattern of squares with objects ranging from roses and shells. The tie is divided into five vertical stripes, these stripes are alternating between a dark navy / black and brown squares, the pattern being 3 boxes on 3 vertical lines, and then alternating to a single row of pattern squares. It is almost like a cricket wicket (sorry for the US friends) in terms of the pattern.

The pattern is structured whilst also highlighting some interesting patterns, the rose being something like wearing his heart on his sleeve, and the structured pattern is apt as Jack Nicholson’s character has a form of OCD and order is something that is part of his character trait. The non conformity of a patterned tie, kind of relates to his creativeness as a writer. (Described by Z From Tie Another Day)

I asked Molly Maginnis about the location of the menswear store where Melvin orders the jacket and tie from the doorway. She said,

We created the tailor shop! 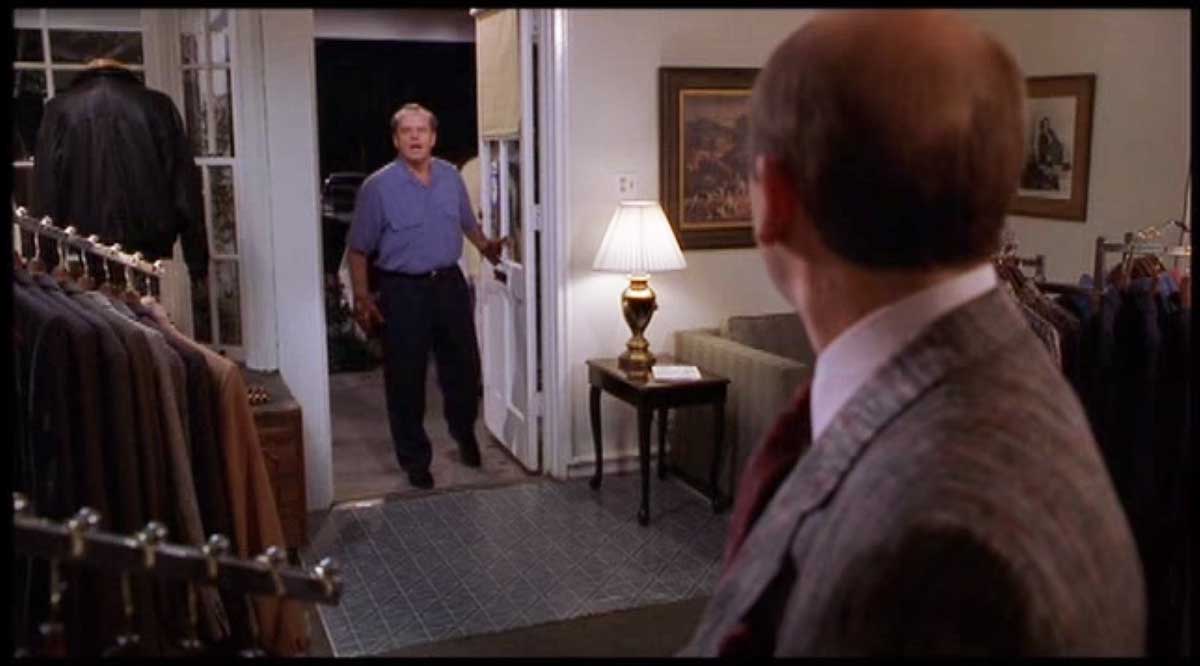 The Most Unusual Jacket

Cuba Gooding Jr plays Frank, a flamboyant art dealer whose eccentric taste in clothes cement his place in the world of creatives. We first see Frank protecting the honour of his client Simon, and confronting Melvin over the treatment of his dog Verdell. He is wearing a collarless double breasted velvet jacket with leather piping. 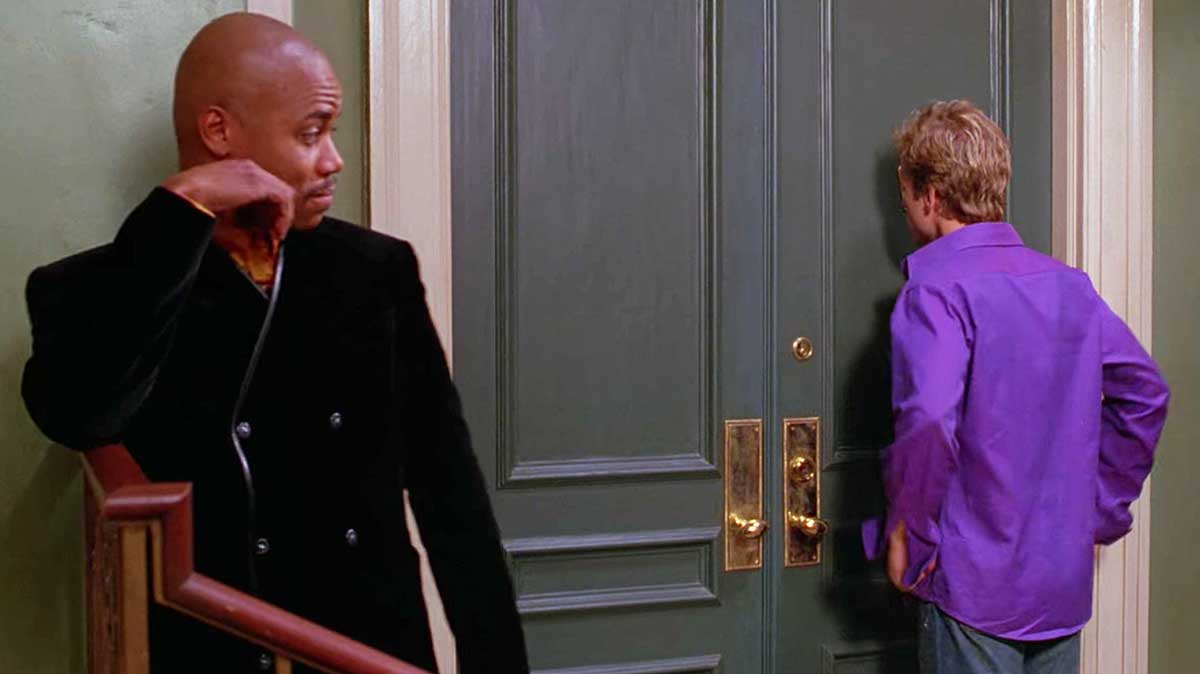 The shoulders look natural but when he pens in Udall in the corridor we can see they are lightly padded. 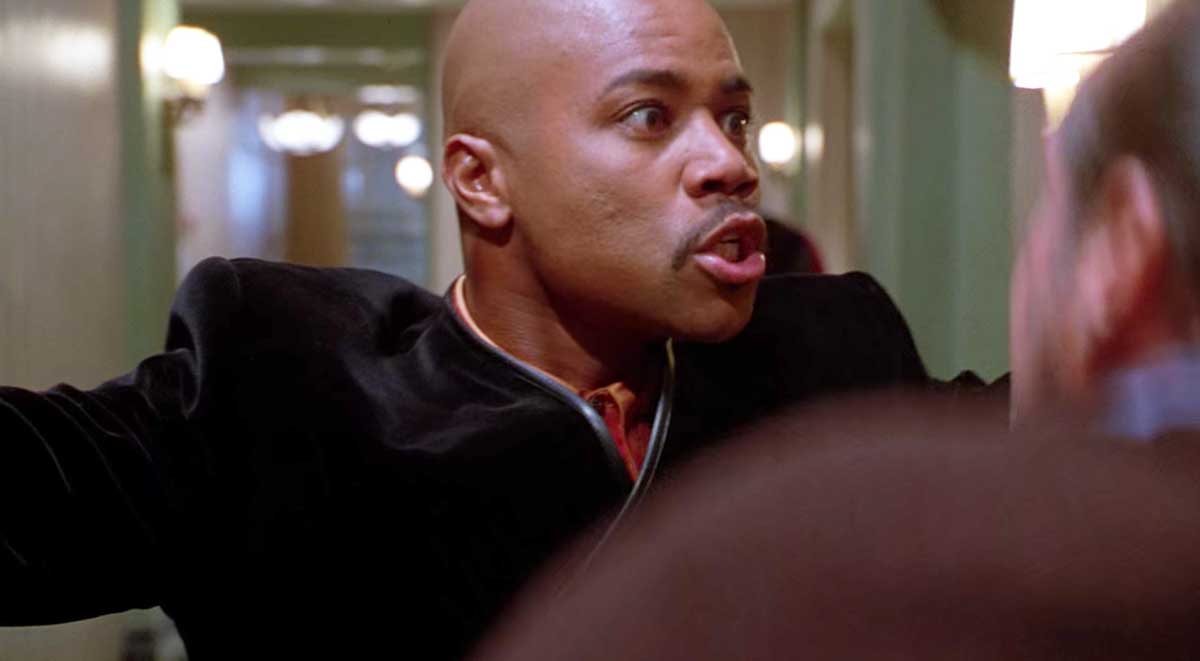 Melvin’s glasses have been credited on Spotern as being a Persol PO 3003 Model. I’ve reached out to Persol for a comment and will update this article if I hear anything back. If you’re interested to learn more about Nicholson and his sunglasses I touched upon that in a previous blog about Man Trouble.

These sunglasses are now credited as being Serengeti sunglasses. (With thanks to Iconic Film Style for the discovery). A pair of screen matched sunglasses sold at auction for $12,800. The listing describes them as, 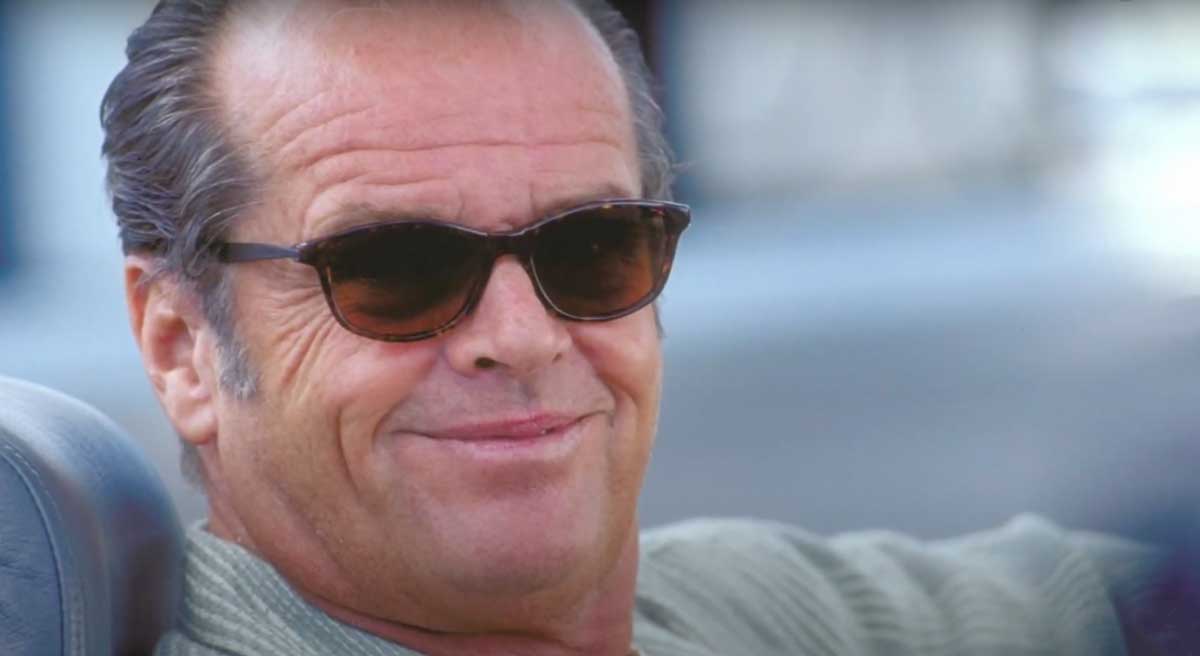 Any input from Jack?

I asked Molly about whether Jack brought his own ideas to the film. She said,

Yes, totally. I mean he really loves fashion and clothes and a big thing were the two tone shoes that we made because he had a pair of saddle shoes. I found a shoe maker in Los Angeles and we made those shoes because we wanted a specific Navy off-white colour for the shoes and we thought that was so important because so much of the film was walking on the crack (avoiding the cracks in the concrete). There was something kind of school boyish about it. We felt it was really unique. The writer part of him, the artist part of him who collected art; we wanted to have things with beautiful colours.

As Good As It Gets Movie Poster

I couldn’t find any props or memorabilia online. There was no auction by the looks of things. Perhaps if Nicholson helped with the wardrobe he probably brought his own sunglasses and some of his own clothes. The movie poster is available through At The Movies. I have purchased from them before so am happy to plug them here. 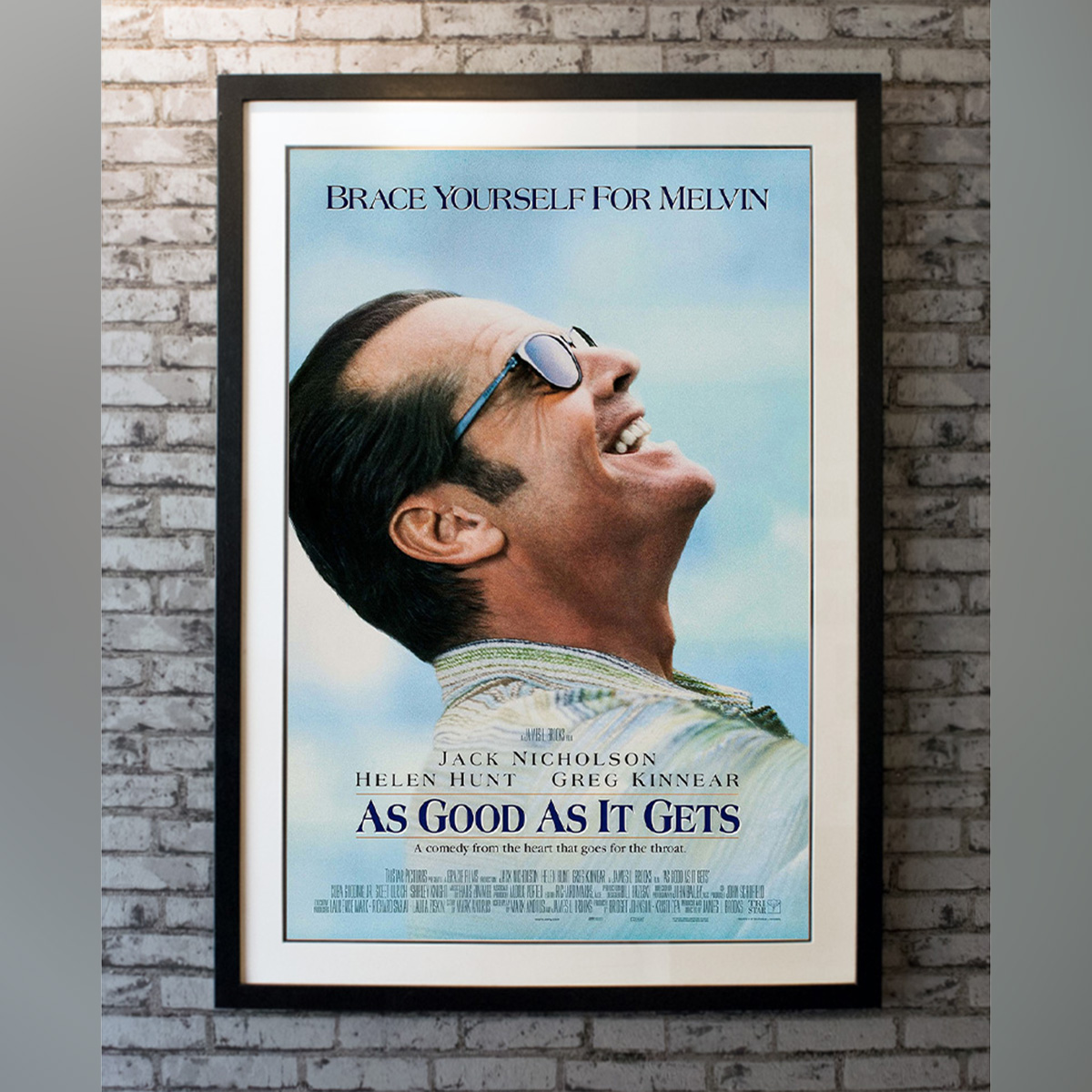 Listen to Molly Maginnis talk about As Good As It Gets and her career on the From Tailors With Love podcast. The podcast is available to listen on iTunes, Stitcher or Spotify or in the player below. You can also catch our chat on YouTube.

Next on my reading list is Jack’s Life: A Biography of Jack Nicholson by W. W. Norton & Company.