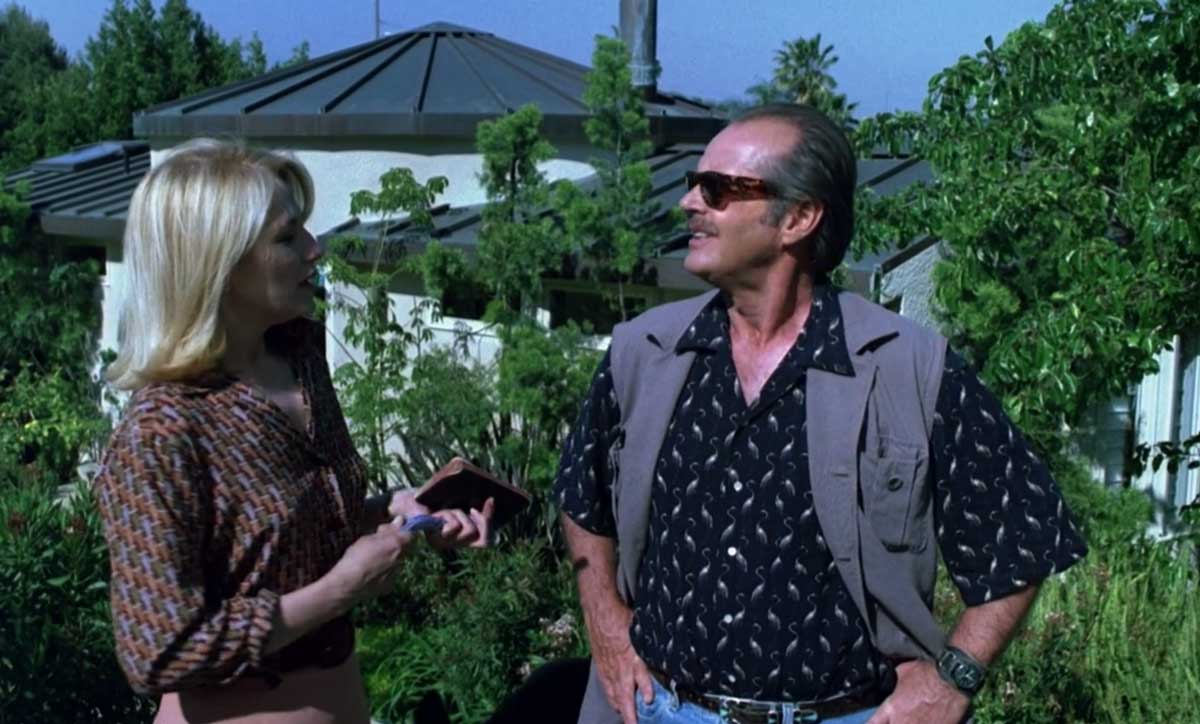 Man Trouble a film that sadly is not the sum of its parts. It’s ingredients being a feckless Jack Nicholson in the turmoils of a divorce, an ailing business and the accidental love interest to Ellen Barkin.

It’s directed by Bob Rafelson, he of Five Easy Pieces fame. But it manages to misfire in unimaginable ways. I can’t imagine the script looked any better on paper than it did in execution.

Nicholson at times looks like he’s physically trying to drag this film up by its shoelaces with his characteristic over gesticulations. 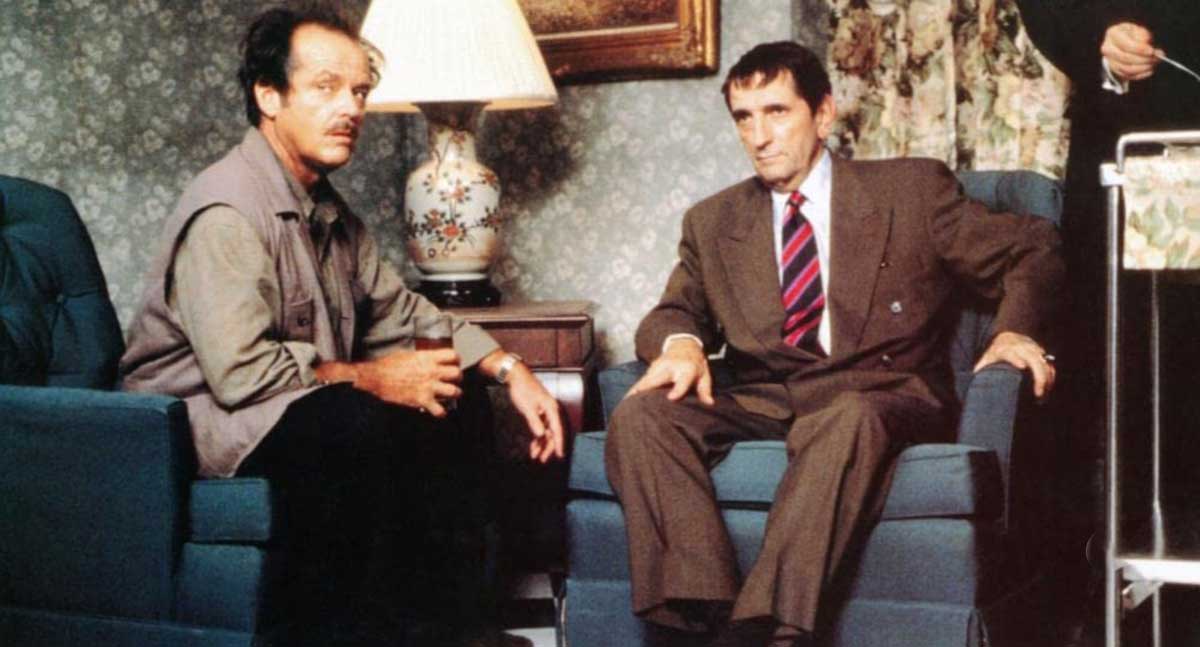 How about that jacket?

The wardrobe, much like the film, is fairly unremarkable throughout. The costumes are credited to Judy L. Ruskin, and she has equipped Nicholson with a sleeveless half-belted blazer which affirms his one and only credential; professional dog trainer.

It’s a non-flattering grey which ages Nicholson considerably and makes the ensuing relationship with Barkin all the more unrealistic. The jacket makes frequent appearances throughout the movie, when one establishing scene with the jacket should have sufficed. 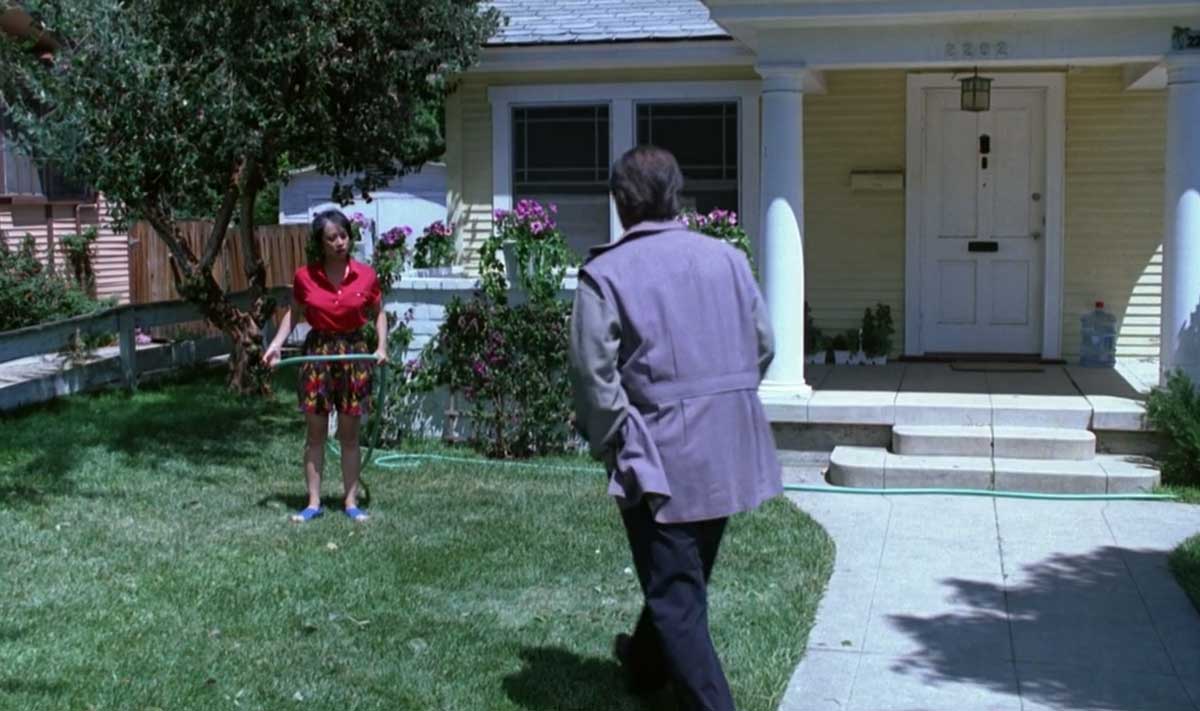 The jacket does shimmy from grey to light purple depending upon the light. The only true notable tailoring is on the back which boasts four darts which run behind the belt.

Much like every dog training jacket you’ll find, the one that Nicholson wears is equipped with plenty of useful pockets. This one is slightly unusual that it has lapels at all. Perhaps this was more of the trend at the time. 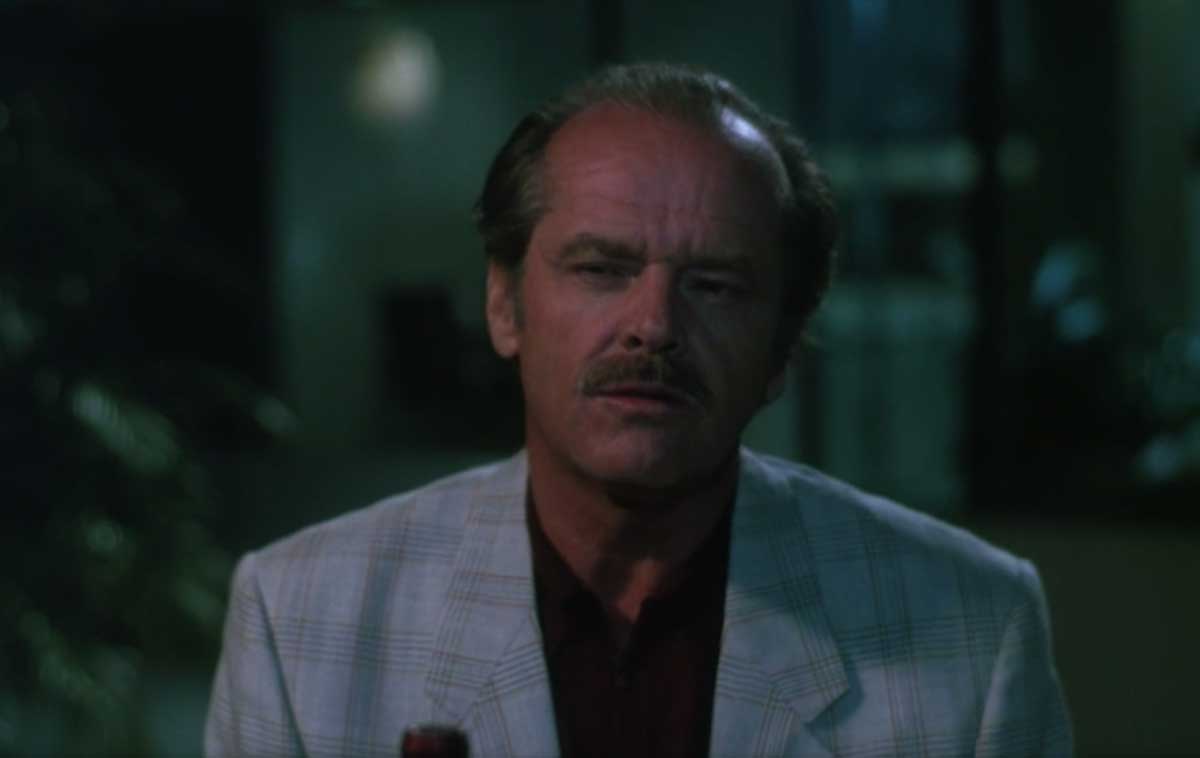 When Nicholson isn’t on the job he wears some interesting, but of the time casual sports jackets. The Date Jacket is an off-white, with blue and orange striped over check, single breasted two button jacket. The button stance is decidedly low which make Nicholson look a bit portly when left to hang open. 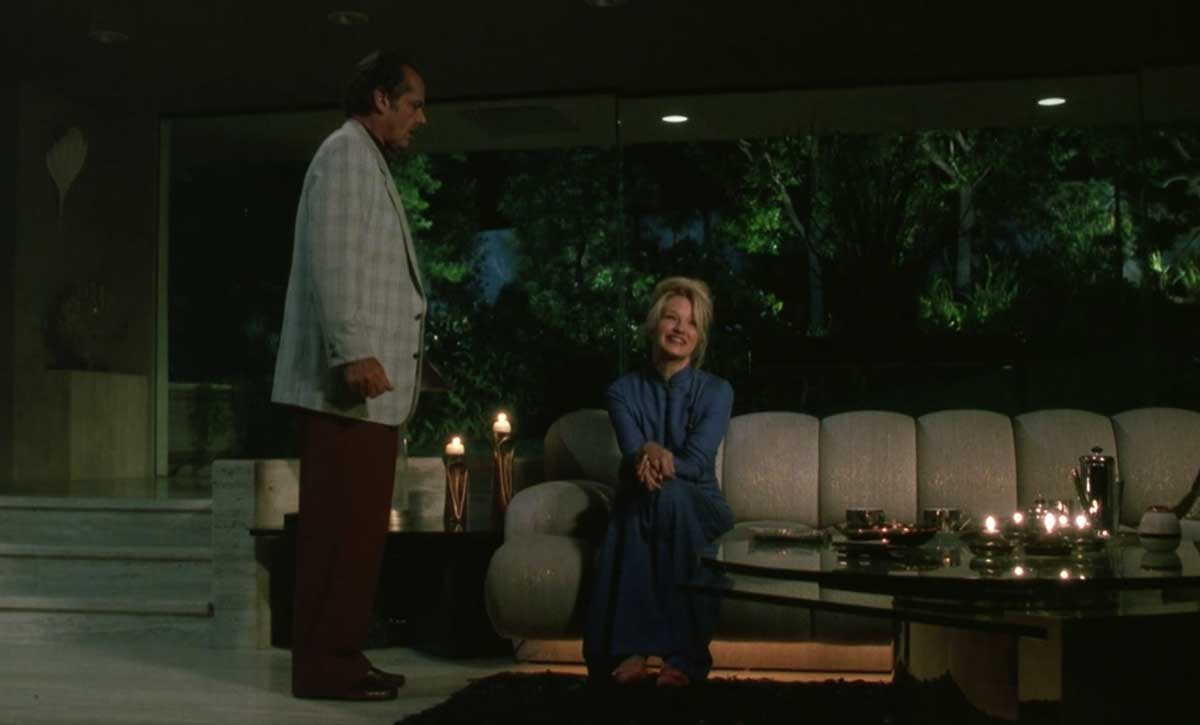 The other casual jacket to note is the green on green striped sports jacket that Nicholson wears to his marriage counsel meetings. The shoulders are padded and he wears the collar of his blue polo on the outside of his notched lapels.

I do wonder if Nicholson had any input into the costuming for this film. He looks relaxed in all his clothes. The character he plays, Harry Bliss, is certainly not a man that would be synonymous with elegance and style.

However, everything feels like there was a lot of spaghetti thrown at the wall, and none of it stuck. 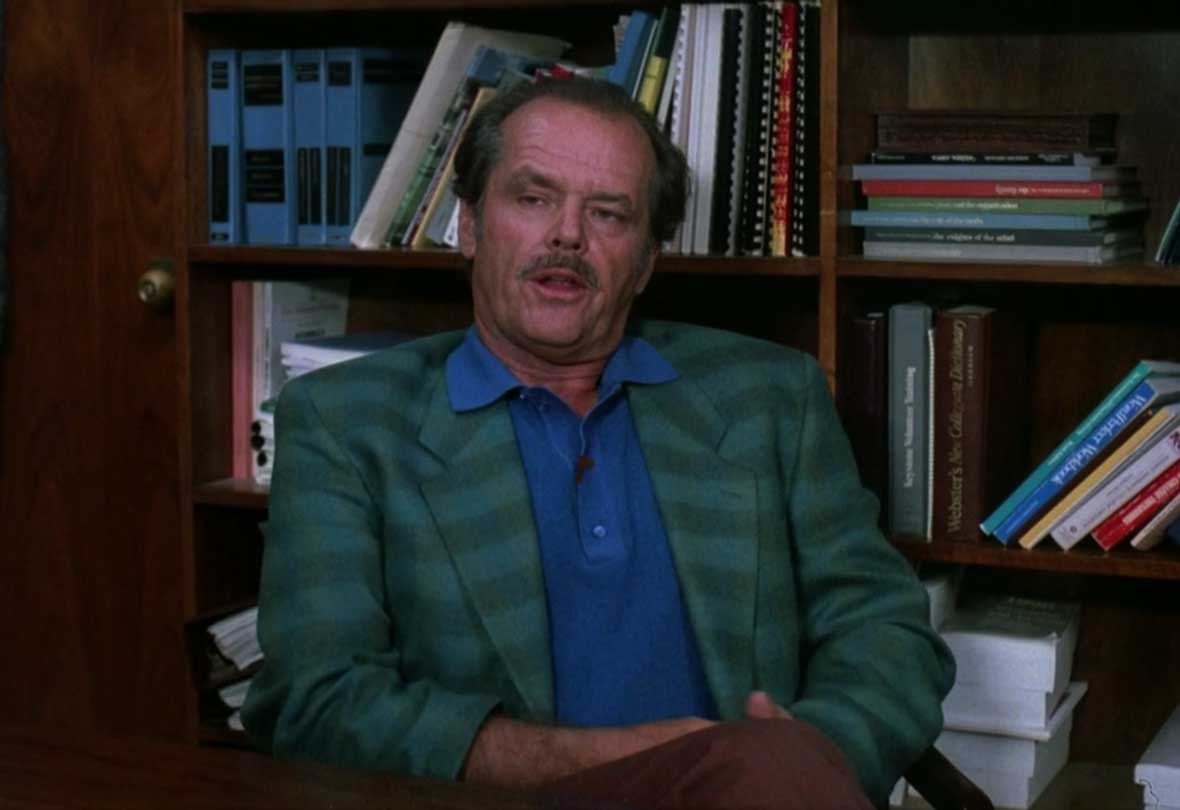 Watch this, not that

In the same year Nicholson would appear in Hoffa and A Few Good Men. The latter is a film I’ve seen countless times. The film is watchable only on the proviso that Nicholson does his schtick well enough to make you invest in his character. Only he has very little to work with and no one to bounce off.

Think how rich the characters are in As Good As it Gets with Helen Hunt, Greg Kinnear and Cuba Gooding Jr. Or even years before as the incorrigible Daryl Van Horn in Witches of Eastwick.

Man Trouble feels like a film one has to do when contractually obliged. It is not a story that needs to be told, let alone watched. The Chefs’ had the ingredients to deliver a Beef Wellington, but all we got was a dogs dinner. Pun intended. 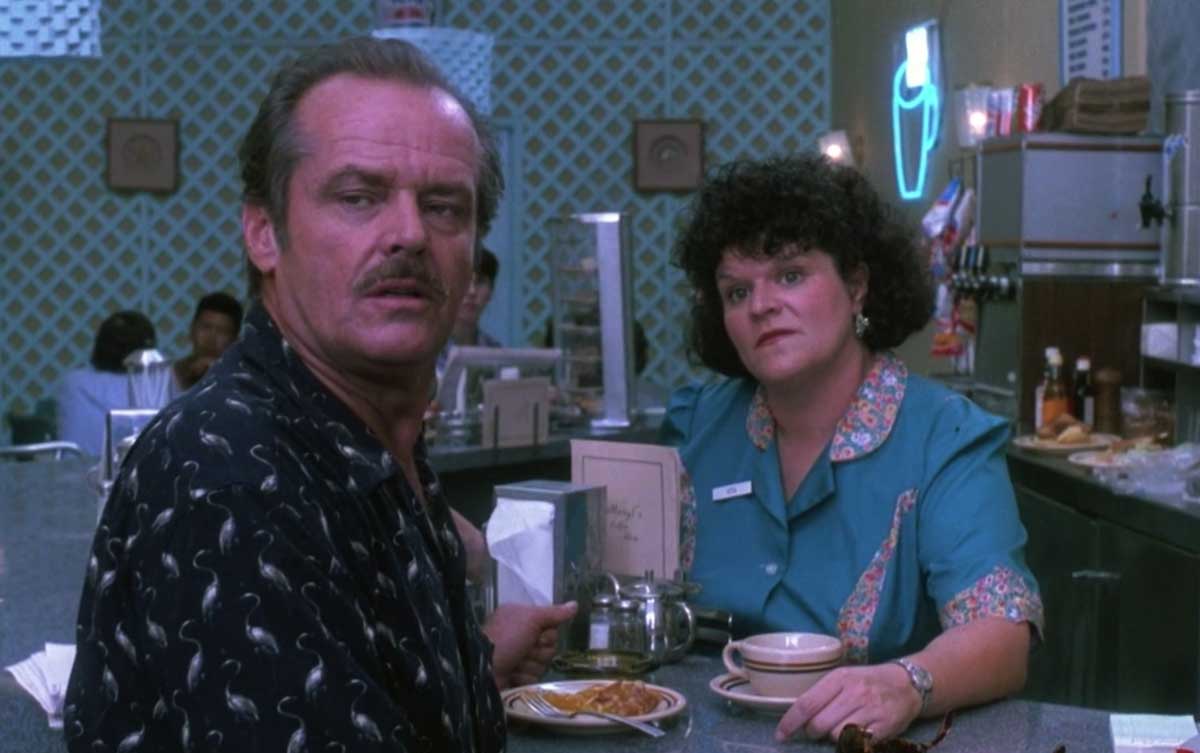 Jack Nicholson has worn Persol sunglasses as Marvin Udall in As Good as it Gets. These look to be an older vintage model, PERSOL RATTI 69218 24 made popular by Don Johnson in Miami Vice.

These don’t have the Persol logo in the corner of the original brown crystal lens. See a comparison on a collectors site here. 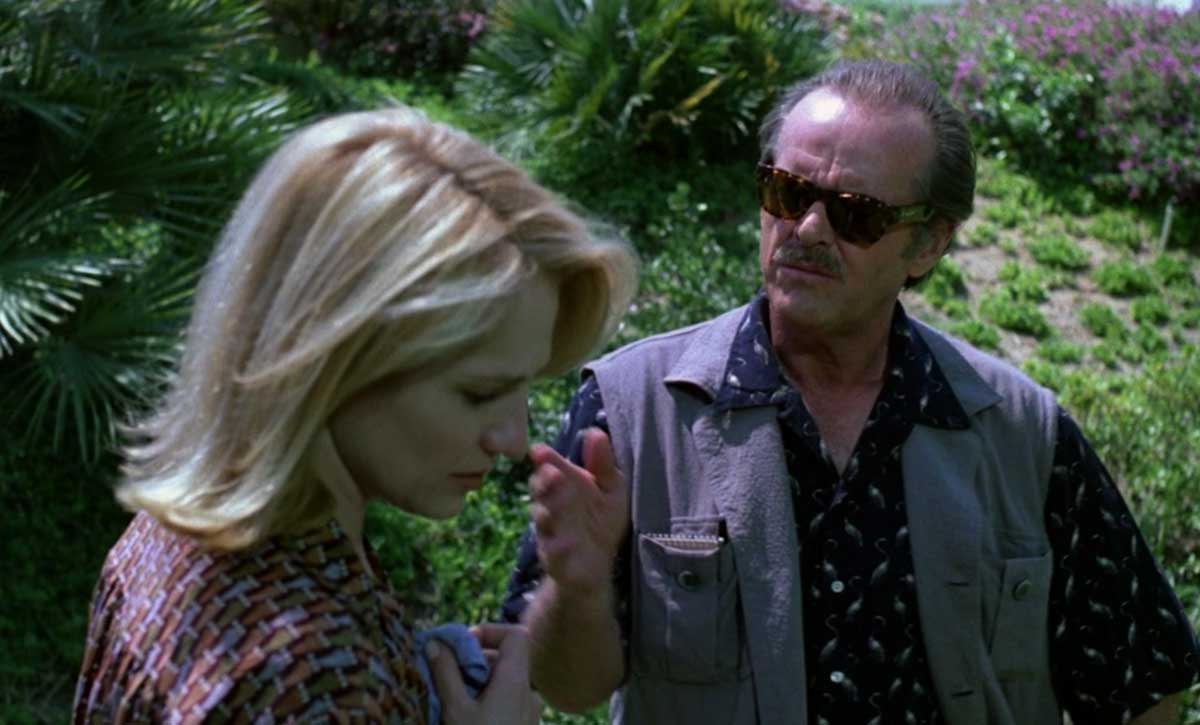 I got the following response from the Persol support team:

I can see that you want to identify the model. We have received a response from our appropriate department and they have checked the link you provided in email, but the images are not clear and it’s hard for us to see the model clearly, and advised it could be the 0PO3231S.

Nicholson would infamously only wear his own sunglasses in movies and not any provided by the costume department. According to another forum I have pulled this comment regarding Nicholson:

Anytime he was asked how many pairs he had he would just answer, “Too many”.

If anyone has a theory on the exact sunglasses, plus the watch that is seen in large chunks of the movie, please get in touch and I’ll happily update the article and credit you accordingly. 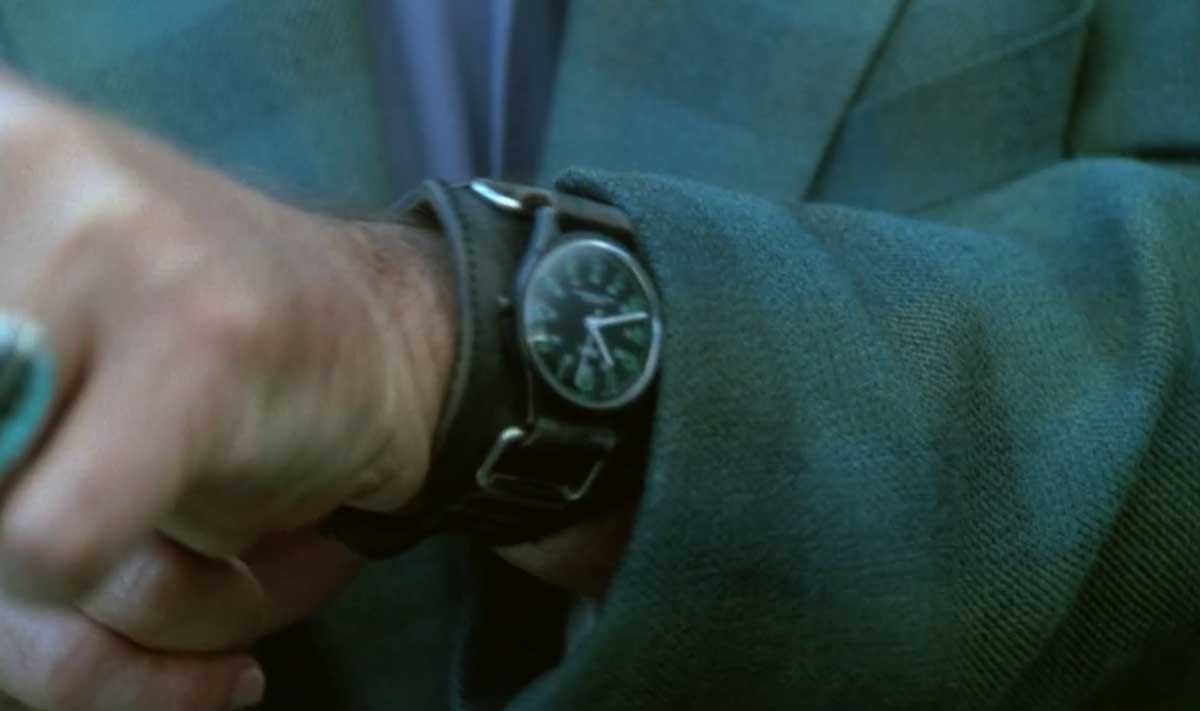 Man Trouble is available to buy on VHS. Next on the reading list and the best reviewed (on Amazon) biography of Jack Nicholson is, Jack Nicholson – The Biography by John Blake.