If there is one lesson to take away from the film Minority Report; always bring your own sandwiches and milk to eye-swap surgery. Only kidding. By keeping your wardrobe as simple and minimalist as possible, you will be adopting a timeless look. 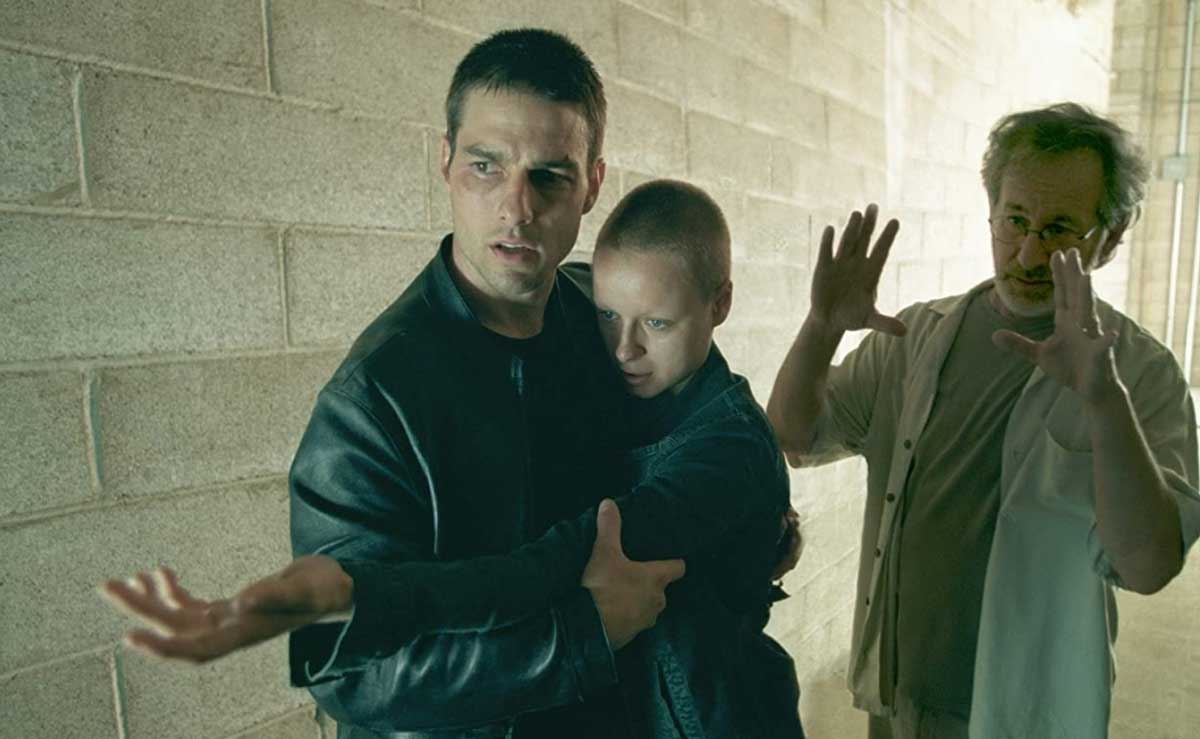 This was the philosophy of Costume designer Deborah L. Scott who commented on the DVD Minority Report Special Edition DVD, Disc 2, that all the clothes worn by the characters were to be made as simple as possible, so as not to make the depiction of the future seem dated.

According to the LA Business Journal, the original designer in line for the film was Colleen Atwood. She is not listed on the IMDB credits anywhere so unsure why she dropped out from the production. 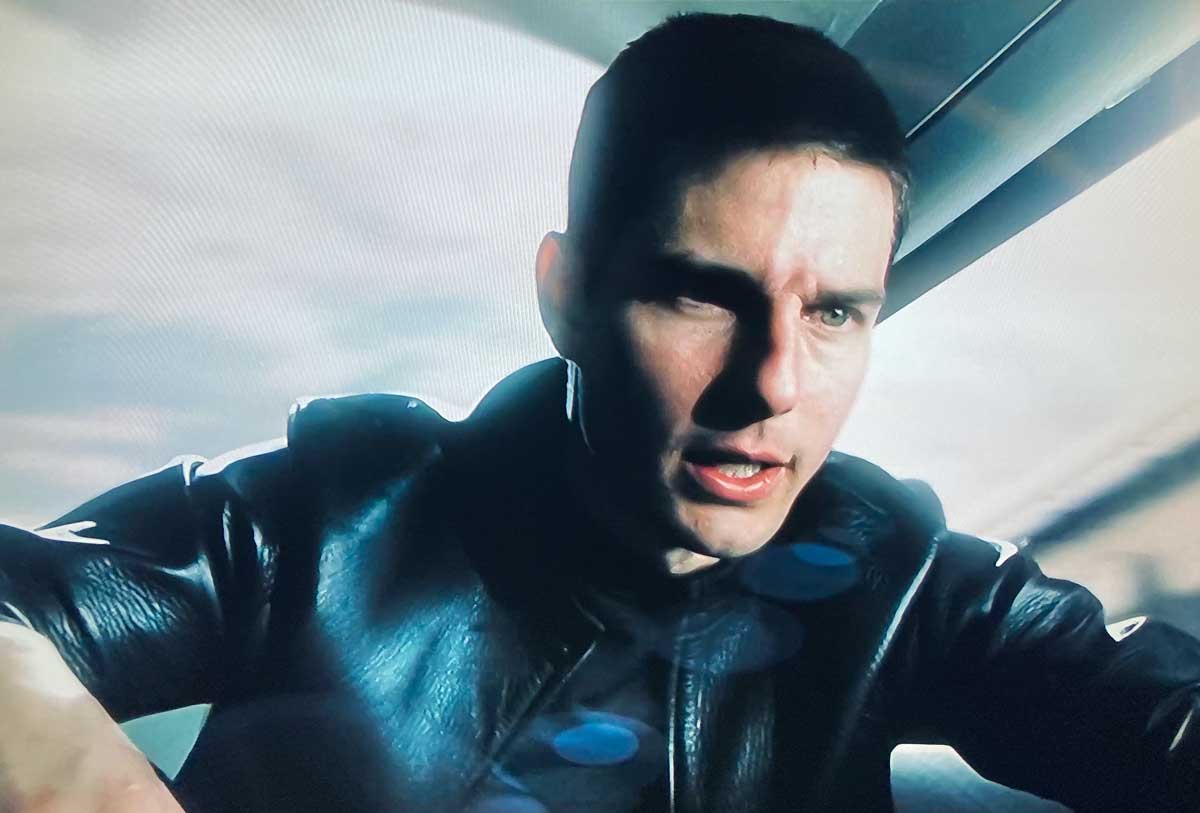 Who made the leather Jacket for Tom Cruise?

According to Spotern, custom Los Angeles leather designer Jonathan A. Logan made the jacket. Although I’ve not had clarification from the brand after reaching out via email. A recreation of that jacket would reportedly fetch 1300 USD. An alternative can be found at Magnoli Clothiers for 429 USD. 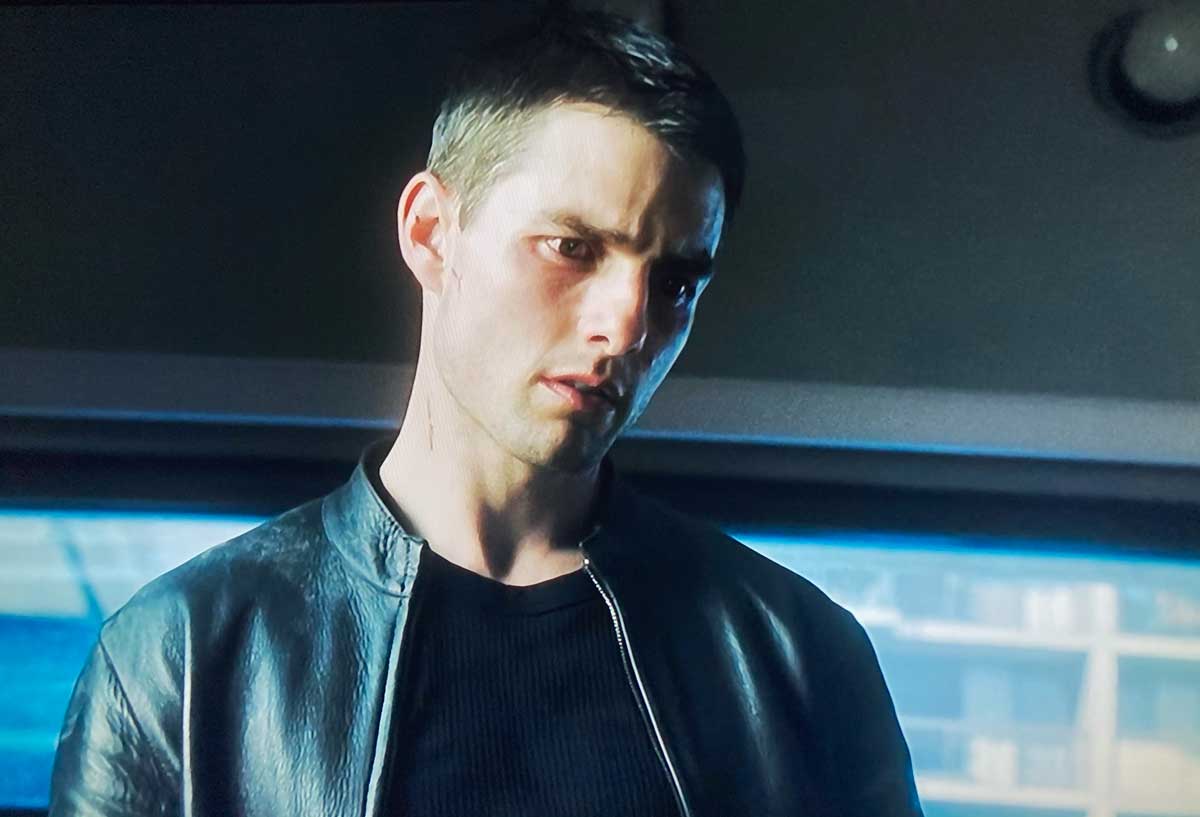 On one hand, the jacket is quite unremarkable; it has very few stand out design features, no breast pockets or hip pockets. The jacket features a plain stand-up collar, rear snap tabs and snap-closure cuffs. There are no metallic studs or buttons which are typically removed by the wardrobe department for health and safety and stunt work. We touched upon this on a previous article about Cruise’s Rodd and Gunn jacket in Jack Reacher: Never Go Back.

Although Anderton wears the jacket open throughout the film, there is a metallic zip visible on the fly closure in some production stills and when Anderton visits Crow. 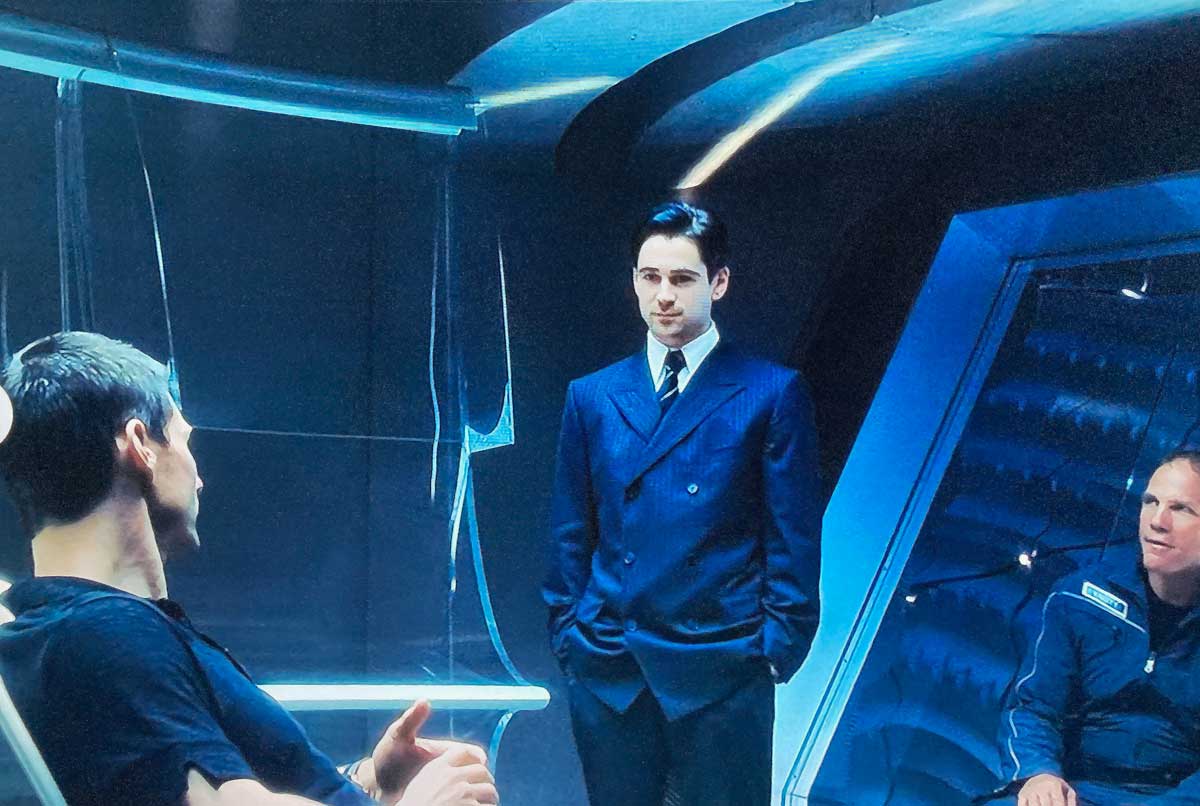 Perhaps the most interesting tailored piece in the film is worn by Colin Farrell who plays detective Danny Witworth. Witworth is young but wears a formal 3×6 double breasted pin stripe jacket. The jacket has straight flap pockets and a single breast pocket. It’s hard to ascertain the exact colour and fabric composition due to the films colour saturation. (Apparently 40% of the colour was bleached from the film).

I’d guess a dark charcoal suit with light grey pin stripes. There are some shimmers in the reflections which could suggest a mohair/wool blend. Witworth is cocksure and he quickly pulls rank on Anderton with his investigation into PreCrime. 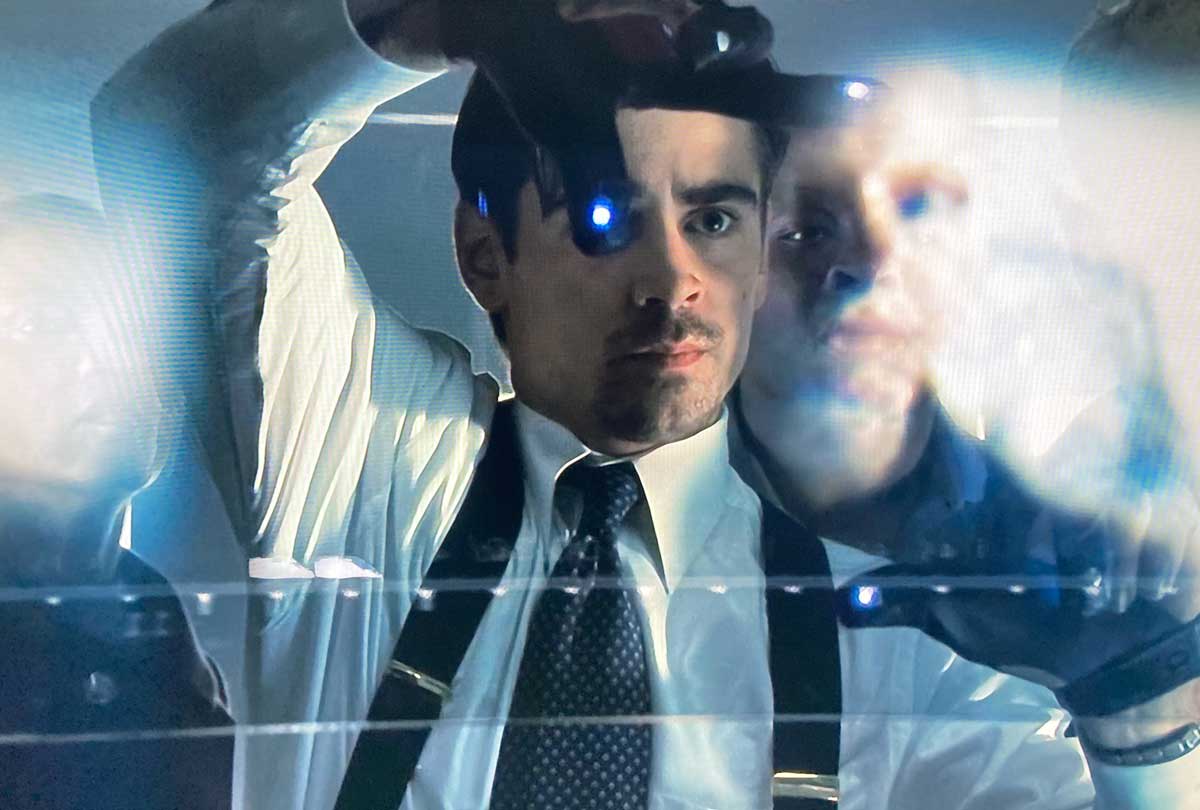 Witworth also wears some some braces and a long point collar. This has both echoes of 50’s noir detective films and contemporary styling. It’s a look that held up in 2002 (year the film was released) and would still look good in 2059 (when the film was set).

For the majority of the film Anderton wears the watch with the dial facing south. Presumably to save on headaches of CGI’ing a digital face in multiple frames.

Interestingly, the watch Anderton wears is an Omega X-33 but with digital Bvlgari branding. The producers were trying to establish a futuristic looking watch and the X-33 was a natural choice but needed to be greatly embellished. I pulled the following from a TimeZone forum below. This was pulled from an online article that is no longer live. 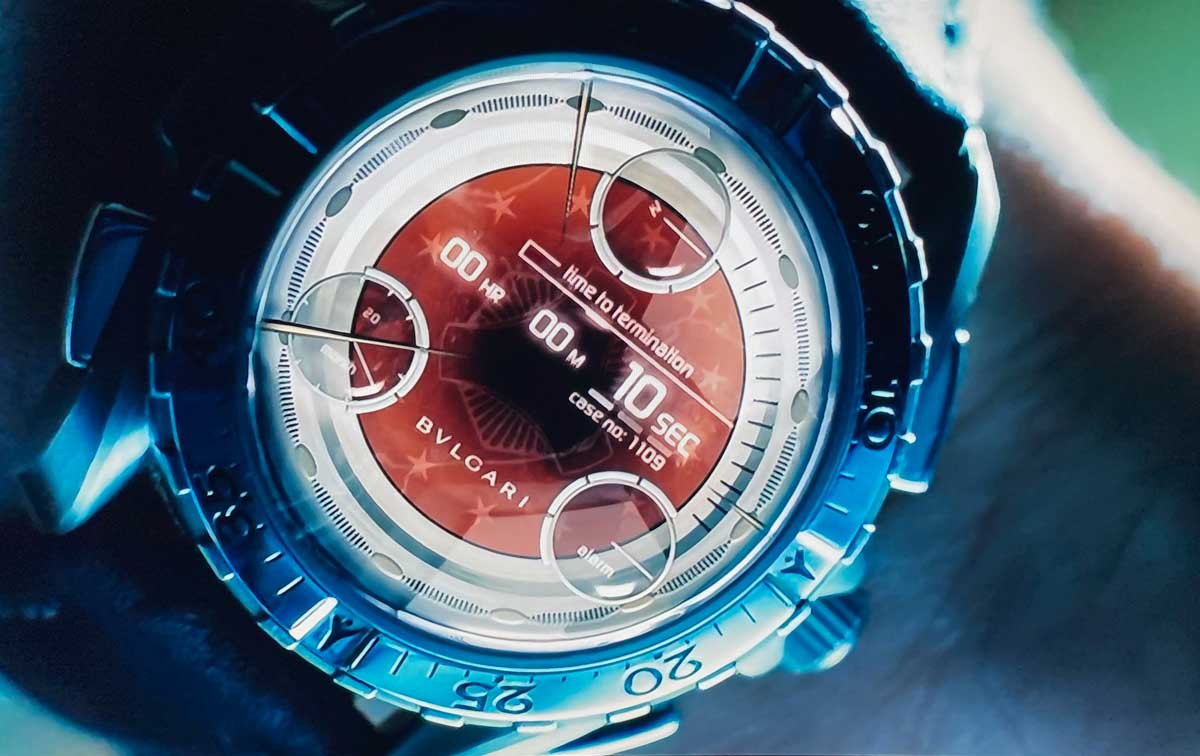 They (the producers) either couldn’t or didn’t get Omega to go along with the idea. It’s not clear if Omega was simply never consulted about the modifications at all or if Omega just wouldn’t agree to the CGI modification – perhaps they preferred instead to publicise an actual production model rather than a watch consumers couldn’t buy.

But in any case Bvlgari went along with the deal so in the final production “Bvlgari” was CGI-printed on the dial. It was later rumoured that Omega/Swatch sued over the transgression and while an outcome was never publicised the matter was likely settled quietly.

At other points in Minority Report when Cruise’s characters not actually looking at the watch, CGI effects were not applied and the watch can be seen in its original and unmodified state.

The original Omega X-33 can still be found on eBay for around 2,000 USD. Thanks to Remmert from Bond Lifestyle for the help and you can check out his WATCH ID website to learn more about watches featured in the movies.

Other Props and Costumes

According to Memorabilia Expert the maintenance uniform worn when Anderton breaks back into PreCrime was supplied by overalls’ suppliers Red Kap. I’ve reached out to the company, yet to hear back. Thanks to an auction listing at Prop Store we know the PreCrime Jumpsuits were made by LA Costume Company Muto Little. 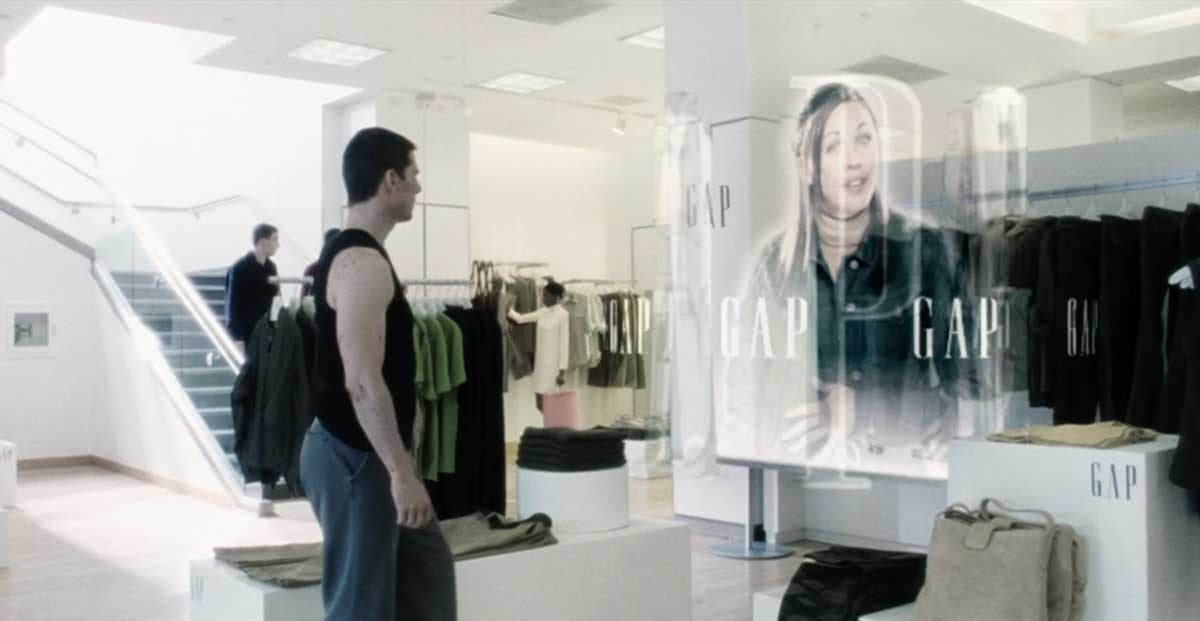 If Bvlguri was surreptitiously slipped into the movie as product placement, you could say other brands were less subtle. The REVO sunglasses were featured on the billboard outside of Leo Crow’s hotel room. Nokia were branded all over the headsets and screens.

The most notable had to be GAP, when Anderton is recognised by his new eyes as ‘Mr Yakamoto’ in the GAP store at 1258 Wisconsin Avenue near M Street, Georgetown.

Minority Report held the record in terms of paid product placement reportedly £13 million ($20 million), which was eventually surpassed by Skyfall in 2012.

All screen grabs have only been used to help give context to the story. I do not own the rights.

Minority Report is based on a book of the same name by Philip K. Dick, and the film is available to buy on Blu Ray. Next on my reading list is The Shifting Realities of Philip K. Dick: Selected Literary and Philosophical Writings.