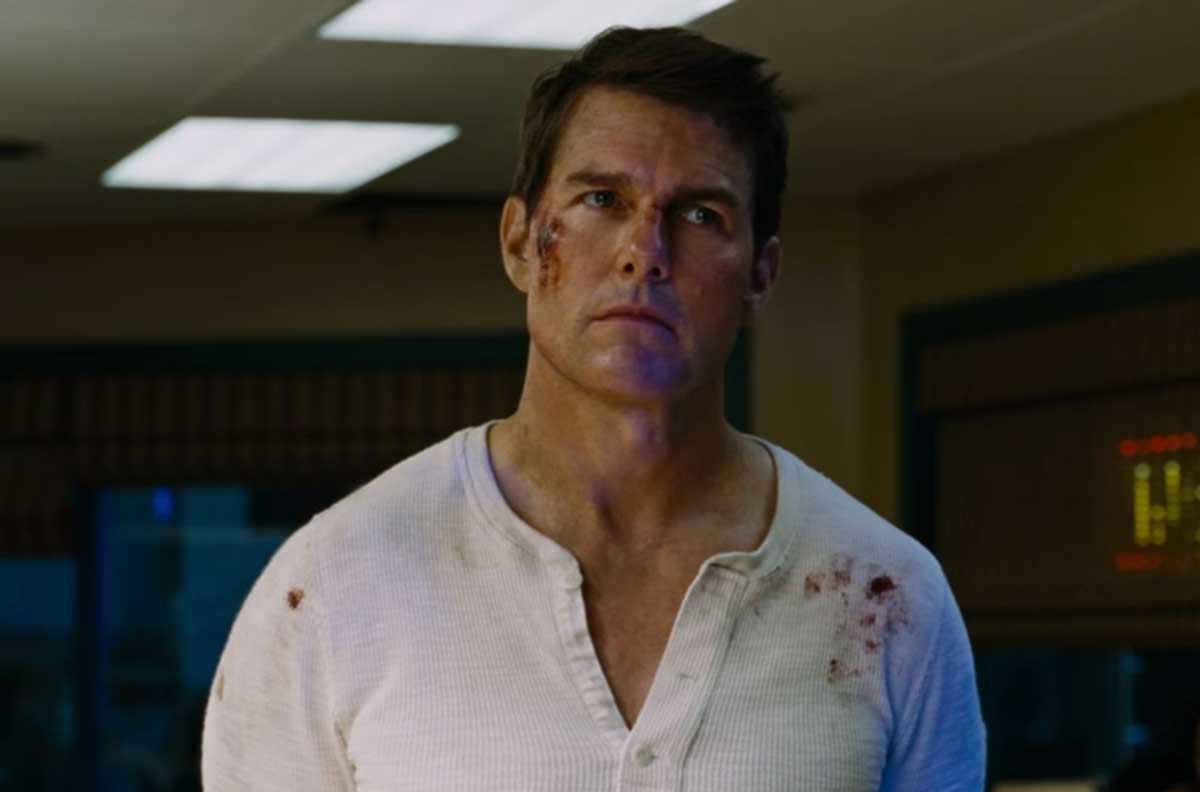 Before we get to Rodd & Gunn

In the opening scenes of Jack Reacher Never Go Back, Tom Cruise (Reacher) is back in his familiar white and bloodied henley. Although it’s not the same model as the one he wore throughout Jack Reacher.

The original had a button on top of the banded collar and the band itself had a visible open weave. Still both are ribbed, and similar in fit. We don’t see much of this henley again. Only in the following hotel sequence and the end sequence where he hitch hikes. Ultimately bookending the film with both hitch hiking and wearing white henleys. 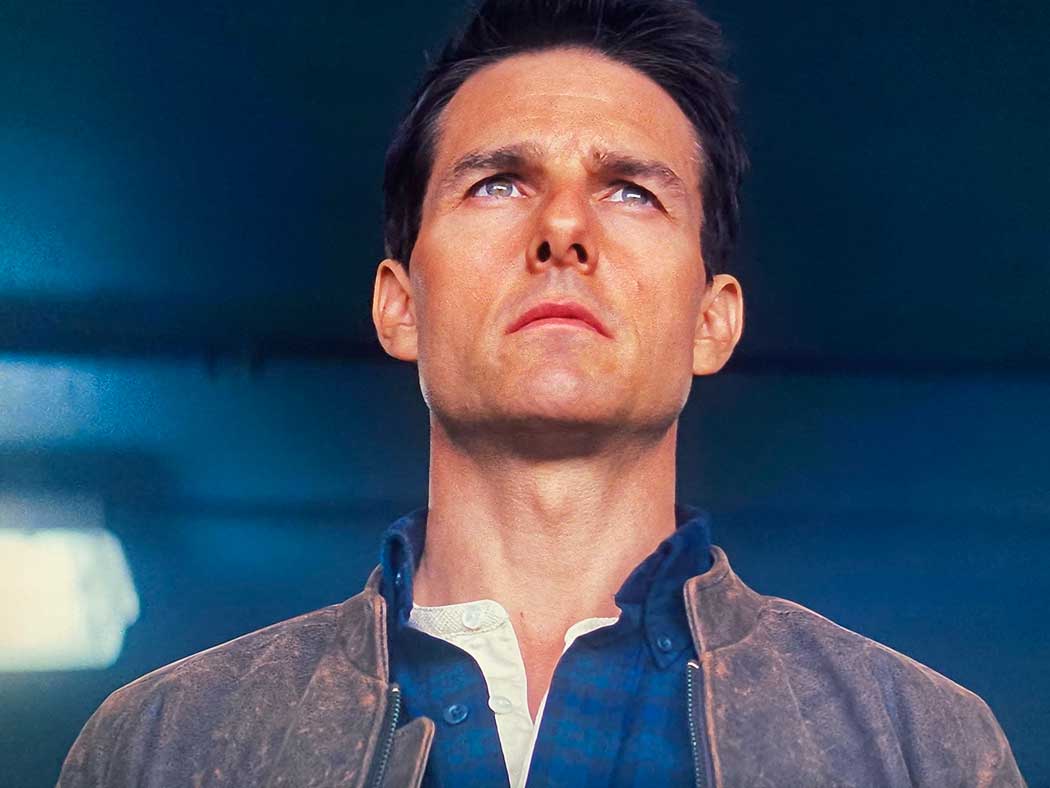 Unlike the first Jack Reacher there are two jackets that Cruise wears in this 2016 sequel. The main one that people will know is this clean-lined harrington jacket by New Zealand brand Rodd & Gunn. See below. 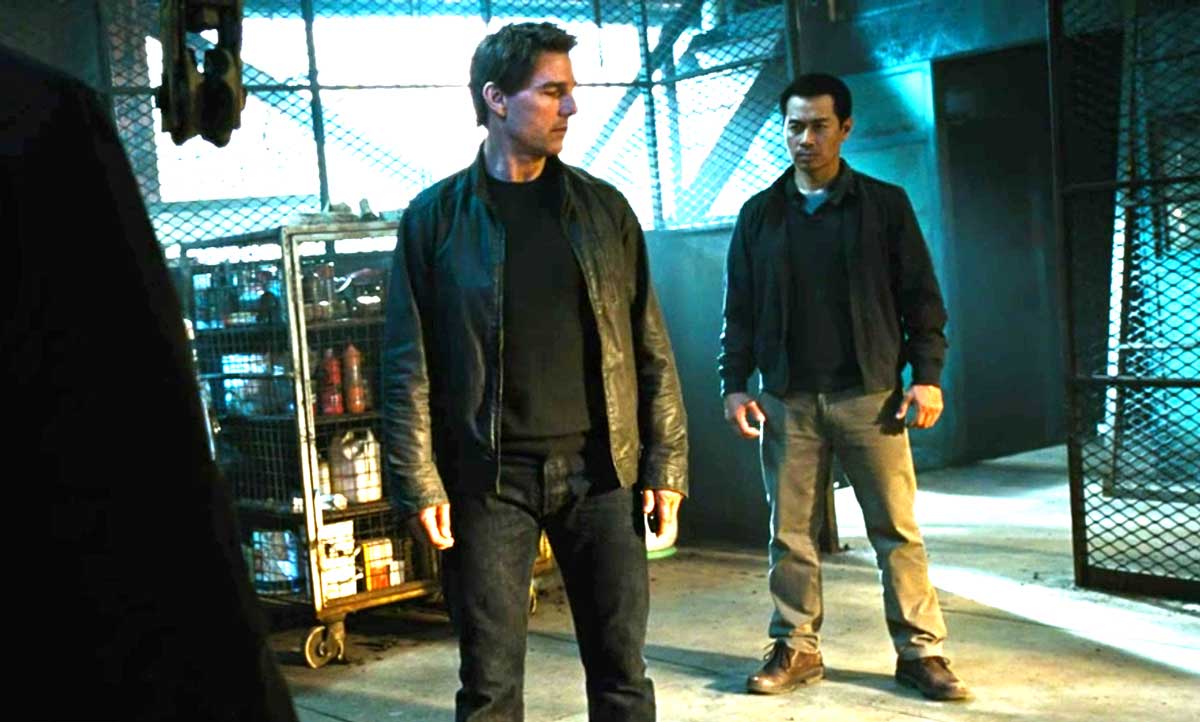 This jacket, according to the description, is bracken coloured with a distressed shower-repellent cotton canvas. However, it looks a bit shinier on camera in certain scenes because they were custom made for Cruise with a heavier coating.

You’ll also notice the absence of zip pulls and metallic pop studs. See the correspondence from a staff member at Rodd & Gunn below from a forum over at Film Jackets.

The Jack Reacher wardrobe team are required to remove or cover all exposed metal parts of the jacket for health and safety reasons during the stunts. This is why they are not visible on the jacket that Tom Cruise wears in the film.

For the final scene where Reacher says goodbye to Samantha in the cafe, played by Danika Yarosh, Costume Designer Lisa Lovaas has given Cruise a softer look for these tender scenes. His harrington jacket has a contrasting corduroy collar. The jetted pockets are slanted again without any zip pulls.

However, the singular breast pocket that runs horizontal, does have a zip pull. Unsure if this jacket is made by Rodd & Gunn, I have dropped them an email and will update this article with their correspondence.

A quote from costume designer Lisa Lovaas on what it’s like to work with Tom Cruise . She mentions him as “another great guy, who puts in 100% and expects that from others.” – from Chic Spy.

Jack Reacher Never Go Back is based on the book of the same name by Lee Child and available on Blu Ray. Next on my reading list will be Tom Cruise: An Unauthorized Biography by Andrew Morton.