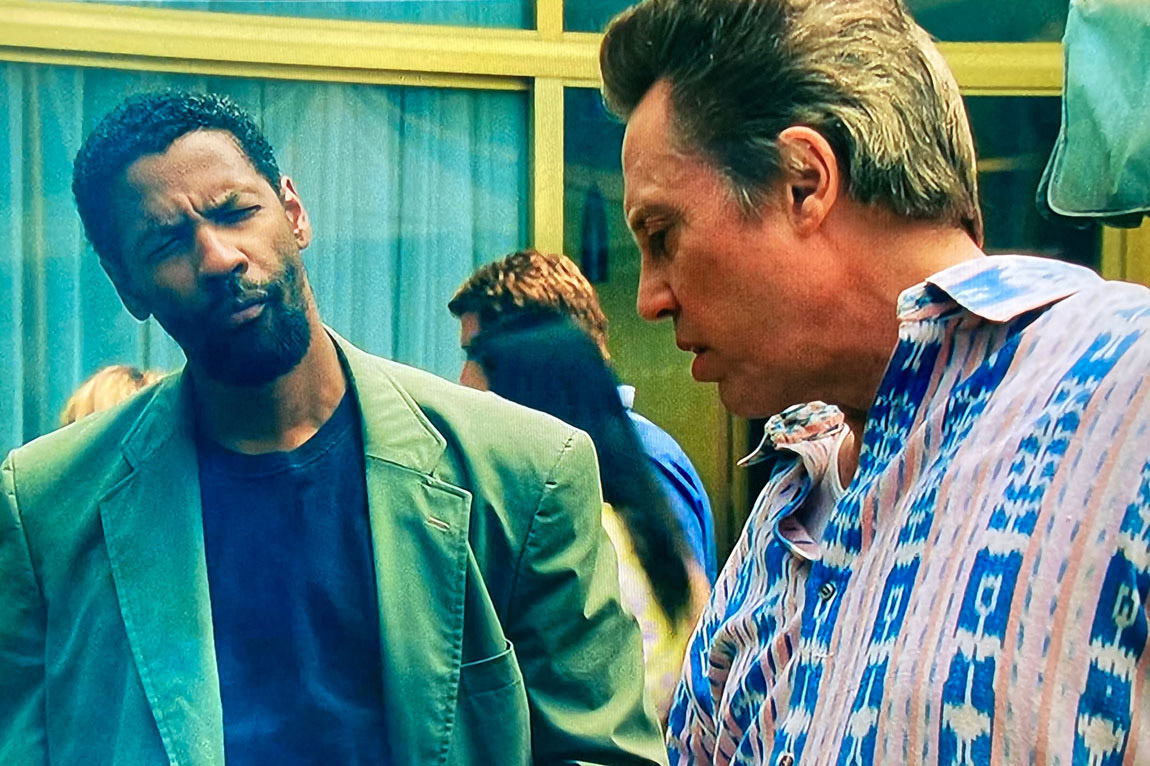 It’s his one suit. Like most men who own one suit, for weddings, funerals, business etc. This is Creasy’s one suit which he wears for both business with shirt and tie as an on-duty bodyguard, and casually with a black crew neck tee.

Much like Creasy, this suit has seen better days. Sadly for said suit, the audience weren’t privy to those days. We get introduced to Creasy’s green suit at his friends BBQ, Paul Rayborn, played by Christopher Walken. 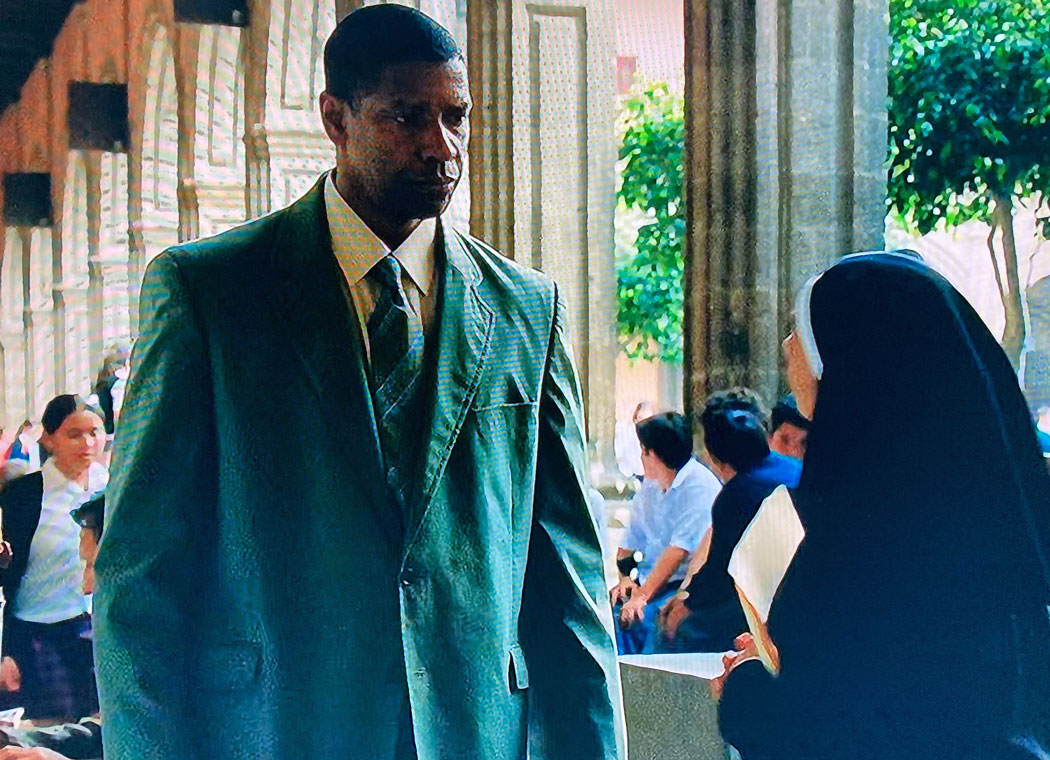 The shoulders are wide and look like they’re missing a stitch or two, but that could be the Neapolitan style. The suit hangs off Denzel in places. Presumably the alcohol fumes excreting through Creasy’s pores is pushing the fabric away from his body although we hadn’t reached the skinny look back then in 2004.

The medium width notched lapels are framed. The button stance is relatively high. 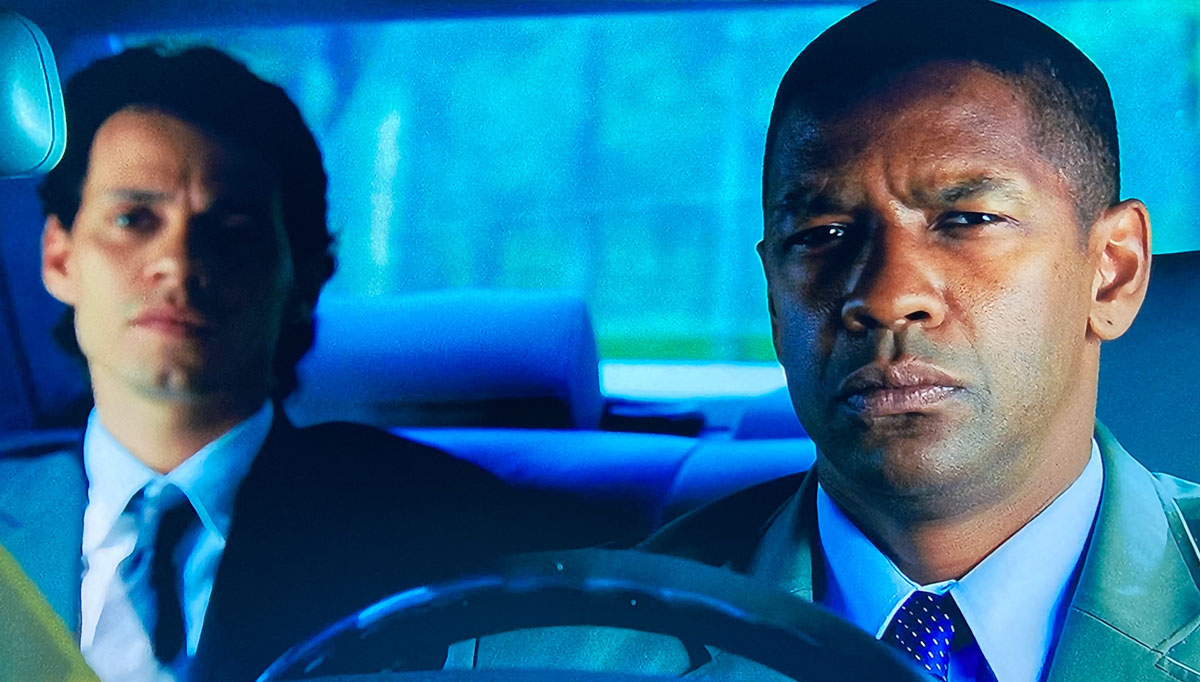 I’m going to do what I do best

Creasy is still scarred by his life as a former CIA operative. Although his tough brooding veneer melts when he is warmed by his new friendship with nine year old Pita Ramos whom he is sworn to protect. His wardrobe too becomes more playful. We see injections of colour to reflect Creasy’s new optimism.

Until that is, it all goes drastically south. 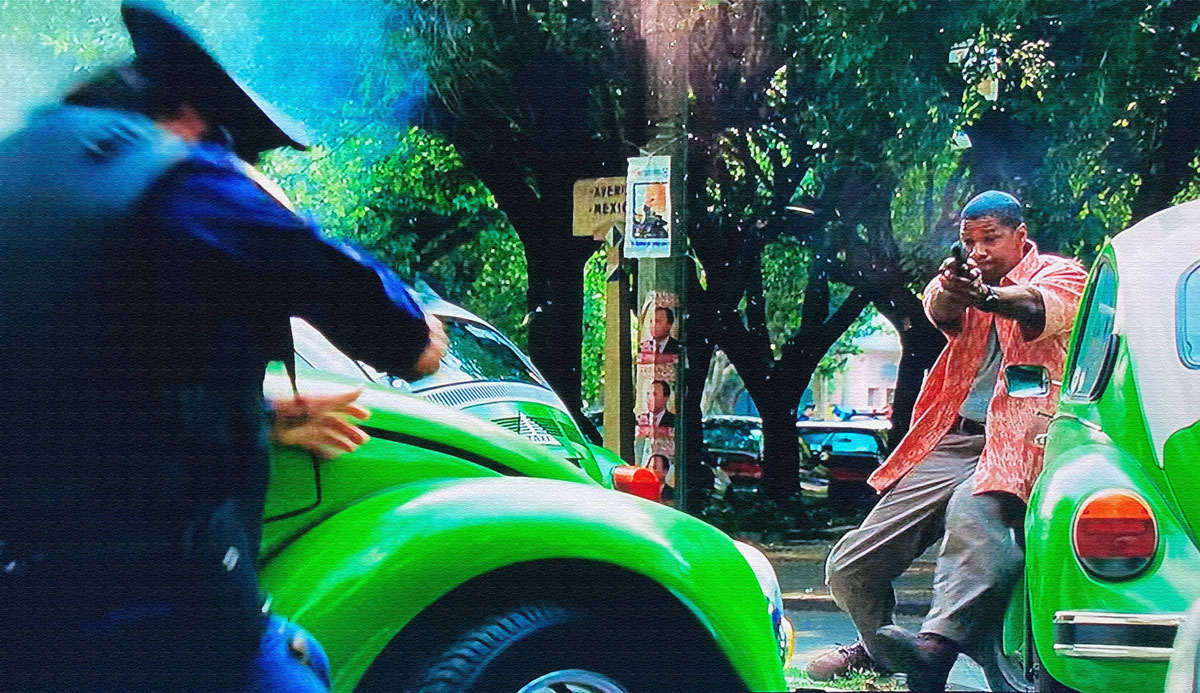 The more interesting costumes surface through Walken. He is relaxed, married and has embraced retirement from the CIA unlike Creasy.

His casual shirts look cool, comfortable and although he isn’t given much to do, he is integral. He is Creasy’s human credential. He is the only survivor of Creasy’s humanity which has been sacrificed at the hands of the CIA. 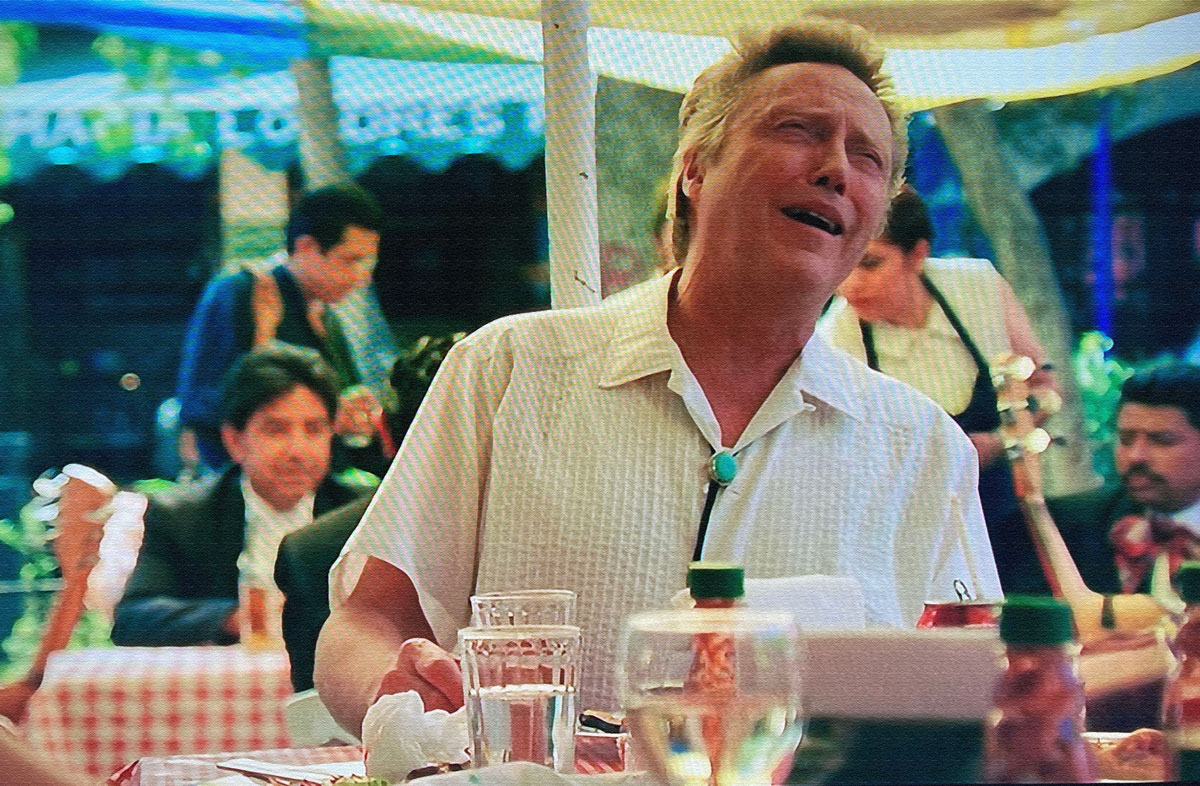 Of all the Walken’s costumes I have picked out this one as my favourite. It’s actually a short sleeve dress shirt with an accordion box-pleated bib front. The shoulders have a western yoke that either buttons down on the front, or has an ornate button for show. He wears an emerald stone necklace for fun. 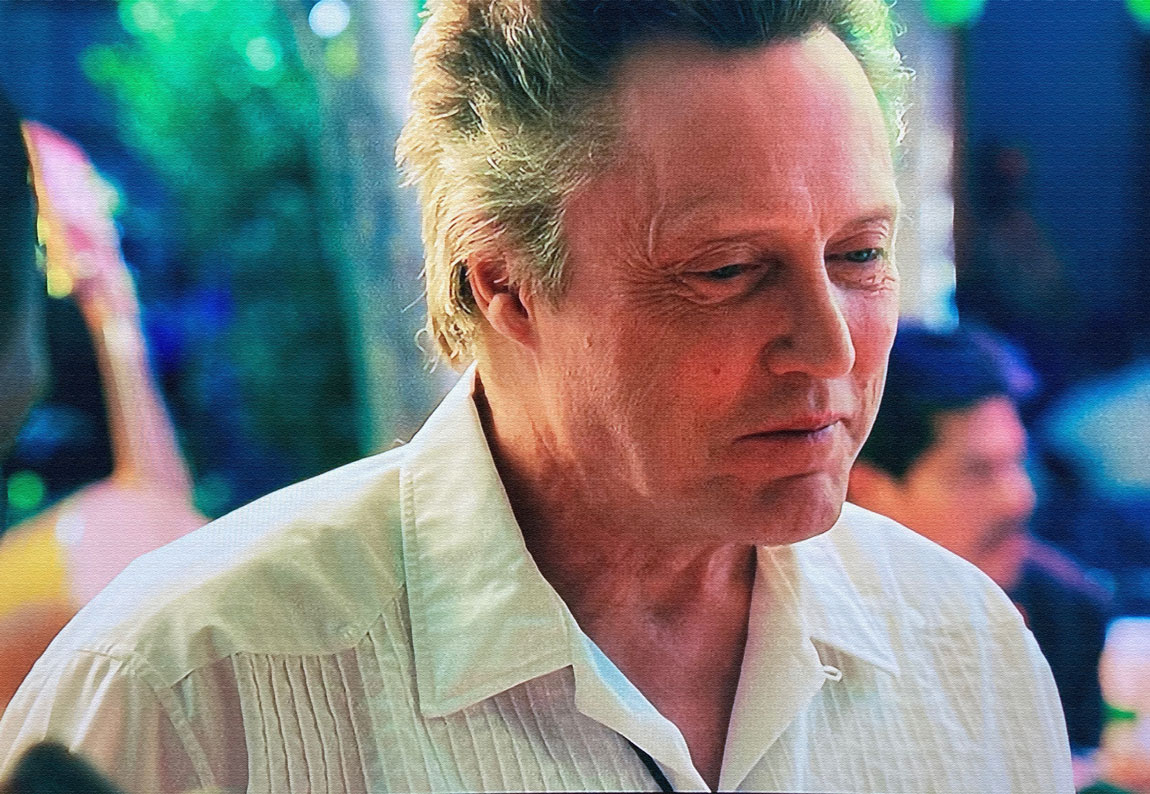 Smoking gets you laid

Giancarlo Giannini plays Miguel Manzano, a detective in Mexico City that smokes in hospitals and sleeps with an attractive journalist Mariana Garcia Guerrero played by Rachel Ticotin. You’ll know her as Melina from Total Recall. 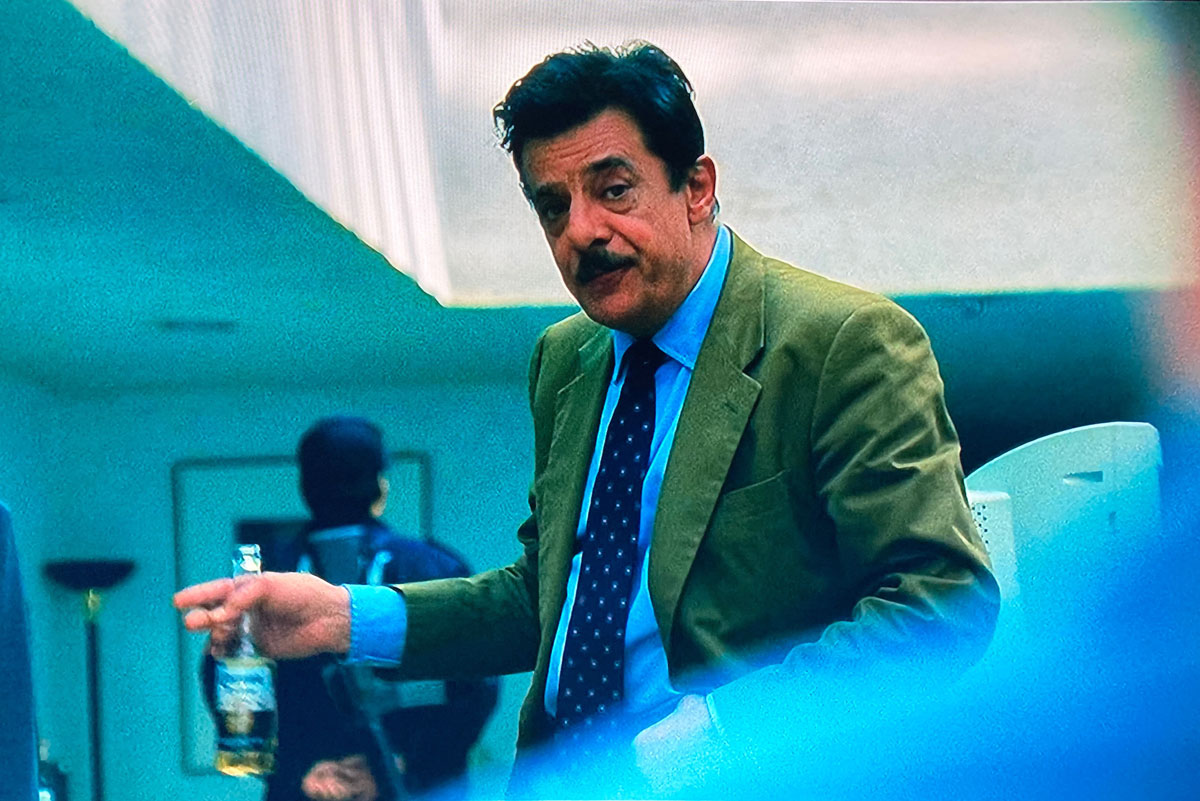 Giannini also wears a green suit, though this is a suit more suited for his frame and has a blue windowpane pattern with subtle yellow overcheck. The framing on the lapels have gone and the fabric reacts beautifully in the light. 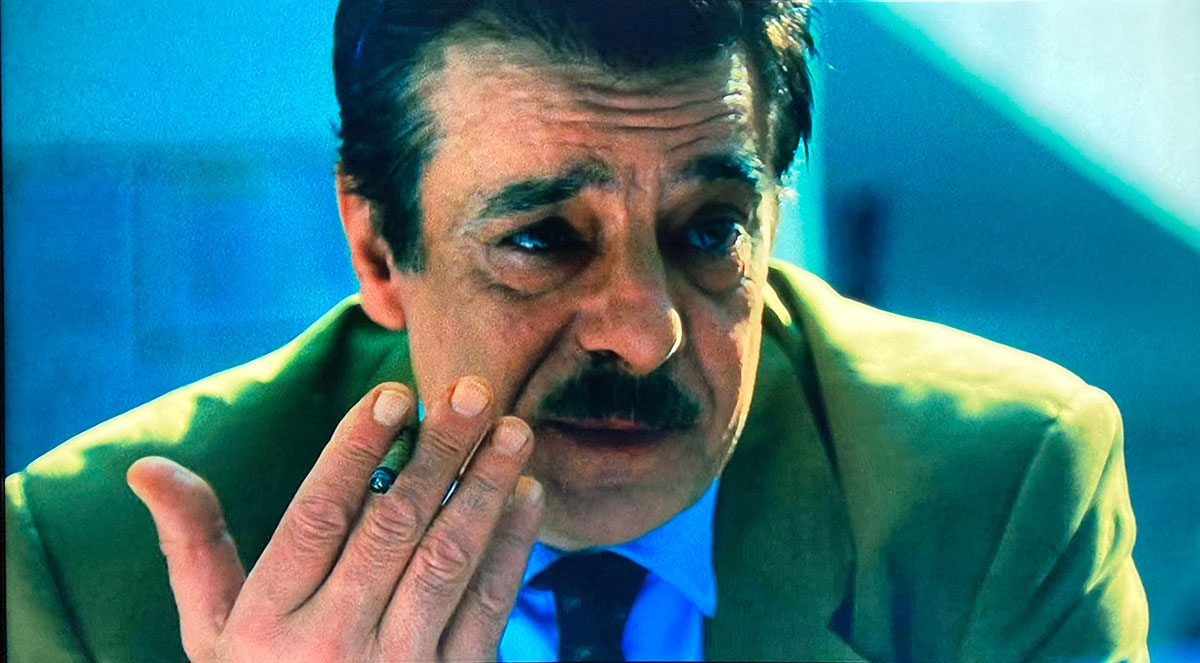 Creasy doesn’t convalesce fully from the shootout where Pita is kidnapped and later presumed dead. He is too intent on taking down corrupt cops linked to the murder.

In no time at all he has slipped back into his oversized green suit, now his defining uniform and compounding his aura as a man of solitude. A man ‘whose art is death, and is about to paint his masterpiece’. 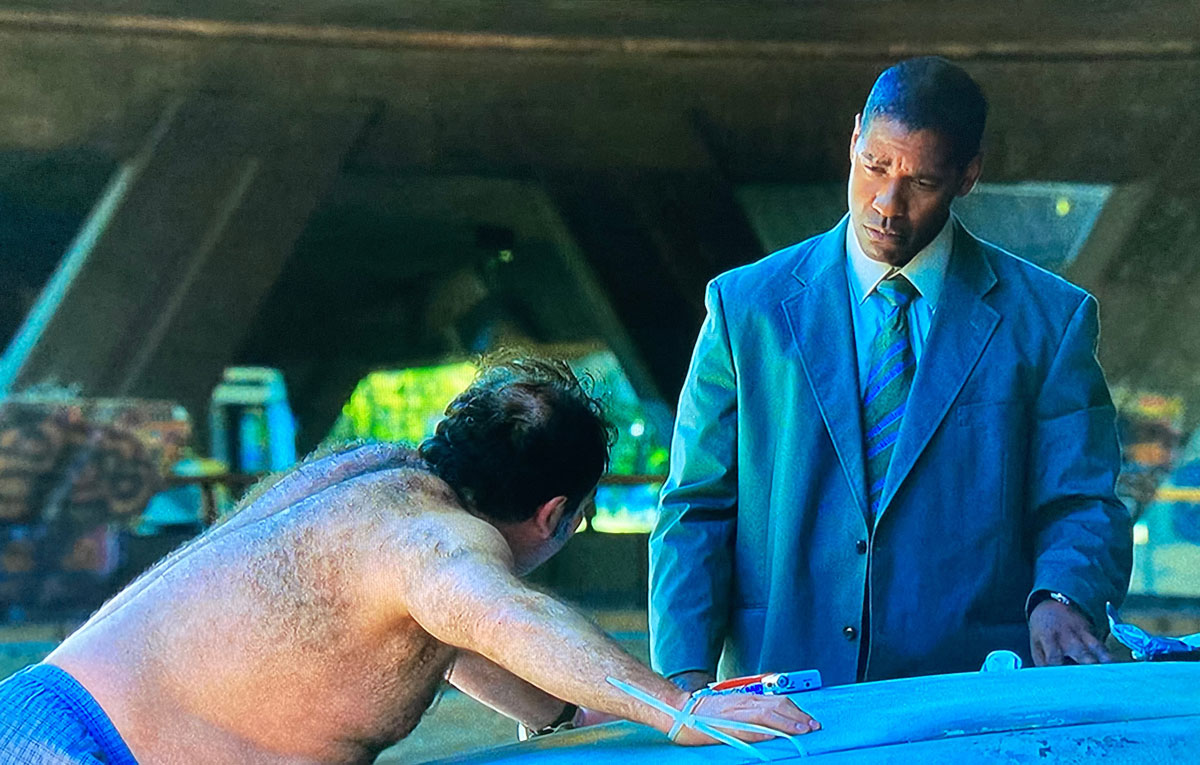 According to Casio Fan Mag, the watch that Creasy wears to time the bomb he plugged up this guys arse, is a Casio ProTrek PRG-40. 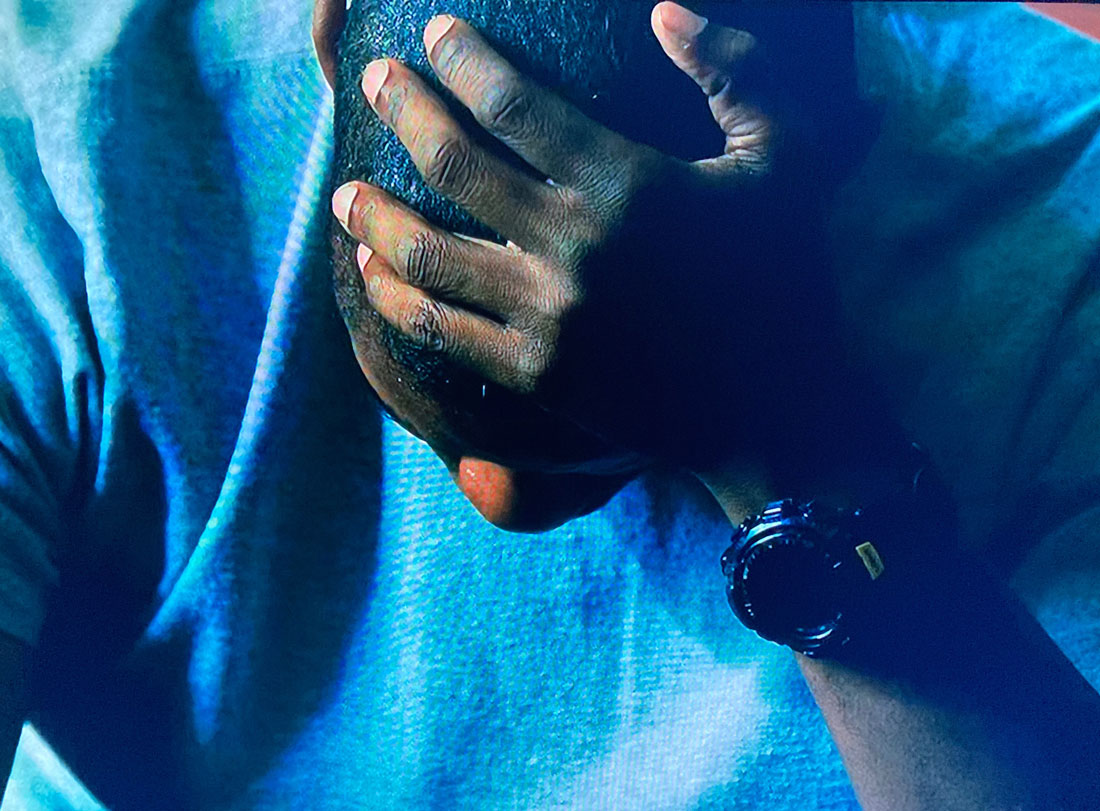 Rourke has a fleeting scene that establishes himself as a broker of morally bankrupt ideas. However, judging by the quality of his pin stipe cobalt blue suit, these nefarious transactions have rewarded him well.

He is enjoying a cigar, his wallet case is crocodile leather. His gold and blue diamond tie ooze wealth and success. His insidious remark about Samuels wife’s ass gives us a window into his character. He’s a geezer that has wormed his way to the top and is an imposter in the classy echelons within which he looks to operate. 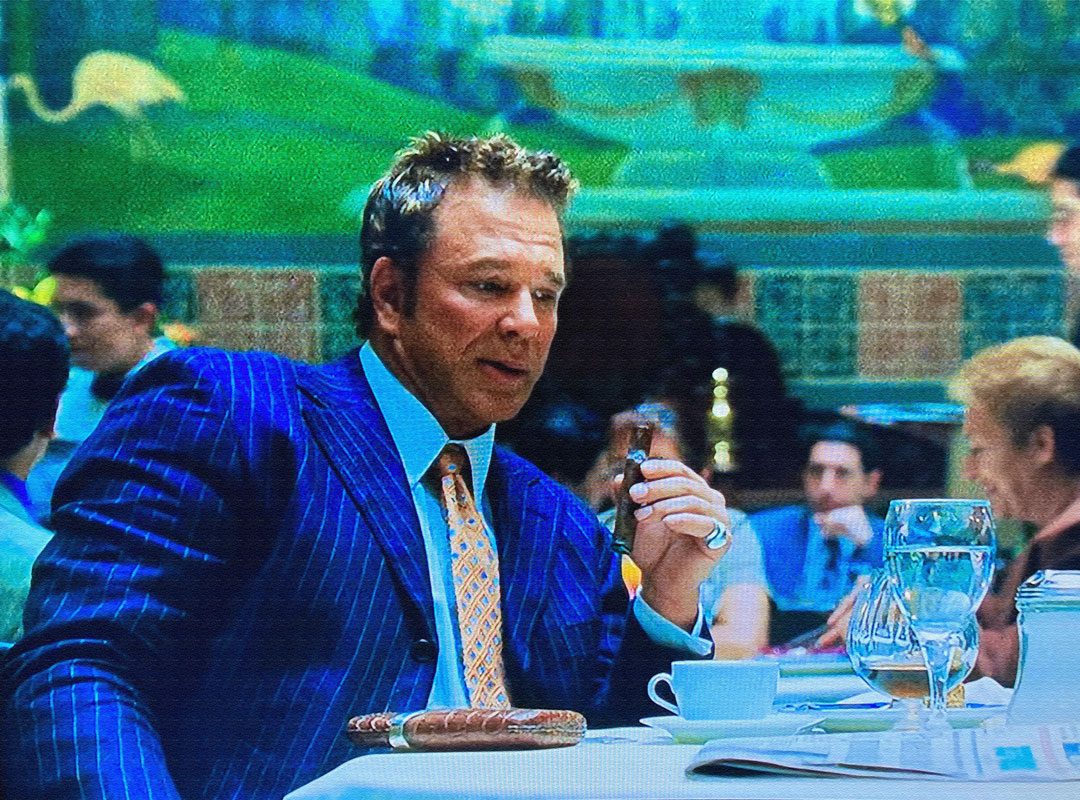 Creasy finishes his hunt for ‘The Voice’ in a Rucker’s 24 Baseball Jacket. The jacket is made of a satin spandex material which lends sheen and gives the jacket it’s iridescence. According to an auction listing on Barnebys, this jacket was estimated to fetch between $2,000 – $3,000.

There is no Baseball team called Rucker’s and this jacket looks to have been especially made. 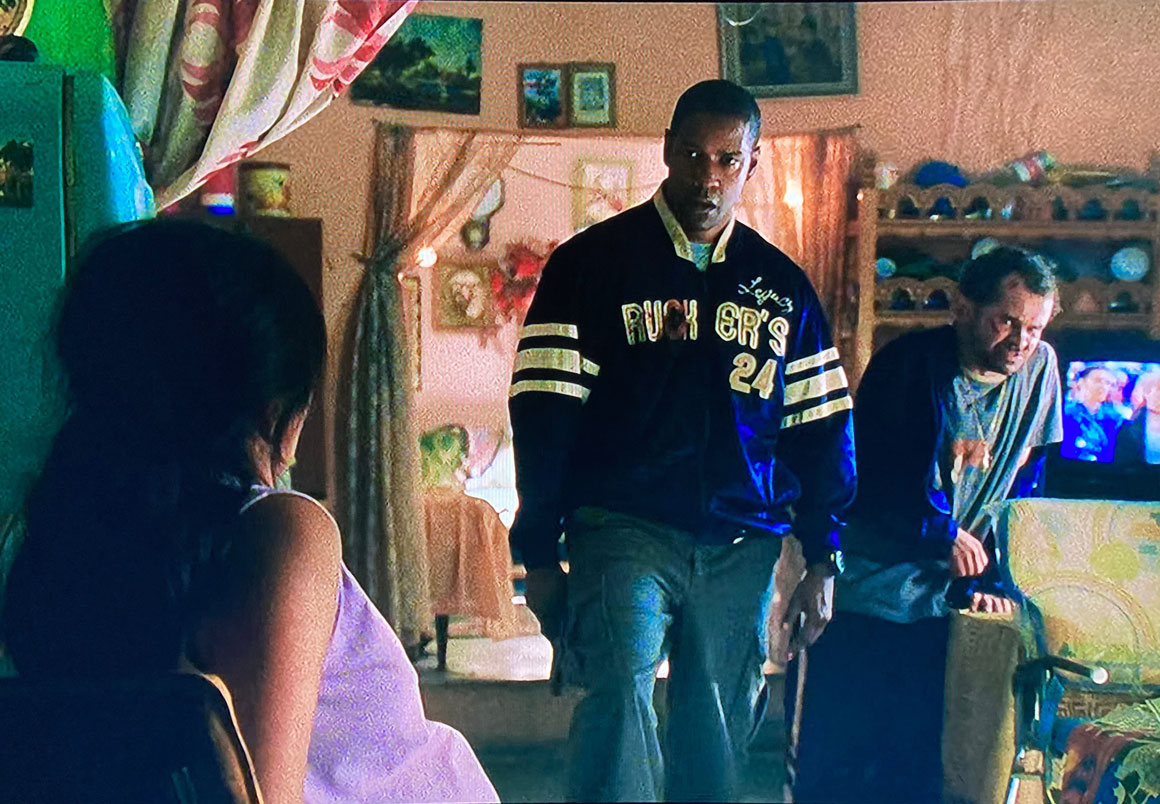 Man On Fire is based on the book of the same name by A. J. Quinnell. The film is available to buy, watch and rent through Amazon. Next on the reading list is the biography of the film’s director, Tony Scott: A Filmmaker on Fire.