‘Do not touch the merchandise mother f**ker’ – Harling Mays, Flight.

Flight tells the story of a maverick substance abuser Whip Whitaker played by Denzel Washington who can fly a plane upside down no problemo. The costume designer for Flight is Louise Frogley who many of you James Bond fans will be familiar with. She was drafted in to design the costumes for Quantum of Solace, replacing stalwart Lindy Hemming.

Due to his profession as an airplane pilot Whip Whitaker has a fairly sterile wardrobe. It largely consists of a mid-grey suit that he wears as slovenly as possible.

Whitaker wears different permutations of striped ties throughout the film, which conveys the image that he is a company man. However, he wears them loose often with his shirt collar button undone to compound his ‘out of hours’ look.

Style is not an area of concern for Whitaker. He is an alcoholic and this informs many of the costume choices. Even as a pilot he has no interest in wearing a flashy aviators watch. Watch-ID has identified it as a Timex Expedition Rugged Analog T49831.

When carrying out maintenance on his plane his disheveled-drunkenness is ameliorated by the fact he is still wearing his shirt and tie. It makes more sense for a drunk to not get changed into work overalls because then he’d be more a mechanic, not a drunk.

If he was of sound mind he’d get changed into overalls but he’s not. He’s too busy chugging back Rolling Rock.

For his climatic scene Whitaker has his court suit all ready to go. We assume, pressed, dry cleaned and it’s very traditional in colour.

Almost boring. It looks to be the same suit he wears throughout the movie. It has a subtle check, natural shoulders and is quite full in cut. There’s little to no suppression. There is a barchetta breast pocket but Whitaker is not wanting to be a dandy in front of the judge so does not wear a pocket square.

He is not looking to make a sartorial statement with this suit. He doesn’t opt for paisley ties or a suit jacket that has anything distinguishable.

His friend and dealer Harling Mays played by John Goodman brings all the colour in terms of wardrobe.

The most interesting being this black bomber with a black and white striped teddy collar and a loud yellow and orange dragon on the back. The material looks to be polyester outer shell.

I Googled ‘black bomber collegiate’ and found the Celine version straight away. It’s close to 1000 GBP and doesn’t have the motif on the back. UPDATE: (There is a cheaper, similar Varsity Jacket available for 60 GBP).

I’ve also found some gold dragon fabric on ETSY for less than 10 GBP, but I doubt you’d want to spoil one with the other by crudely fusing the two. 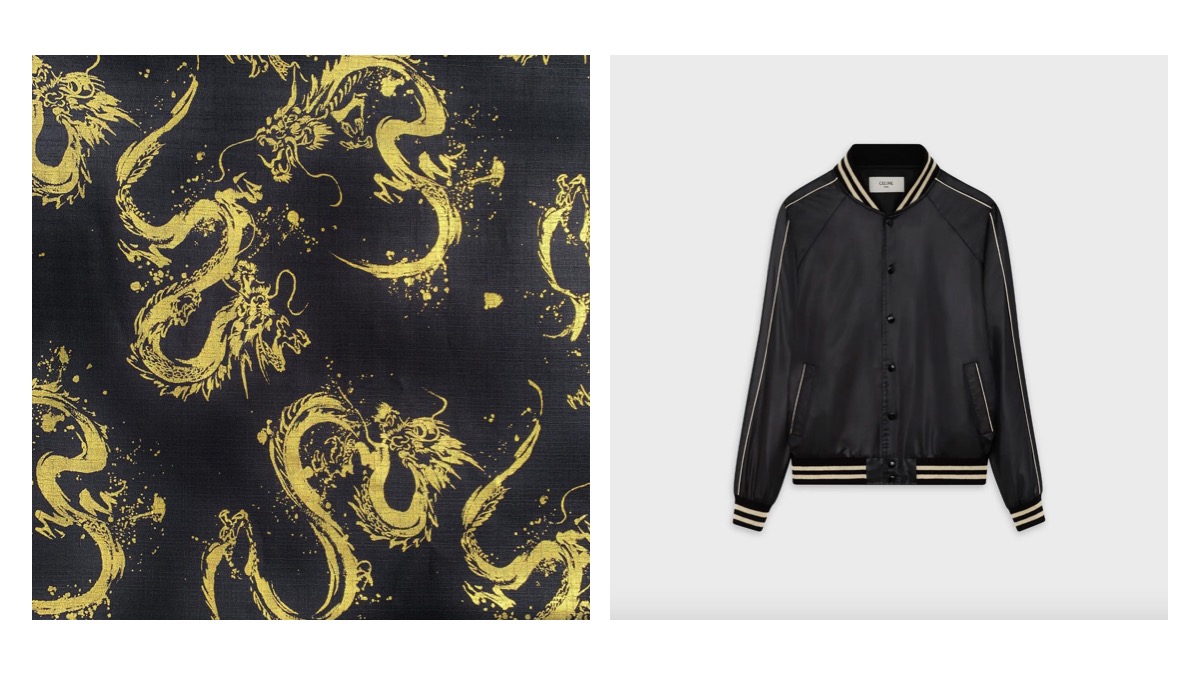 Buy the movie, read the book

Is it possible to roll the plane? Next on my reading list is The Movie Flight and Accountability, available on Amazon. The movie Flight is also available to buy.