I used to hire a company to make them (tee shirts) I didn’t love the quality. So I started digging into how can you get decent T shirts that have a nice effect on the finished t shirt and it will last forever. 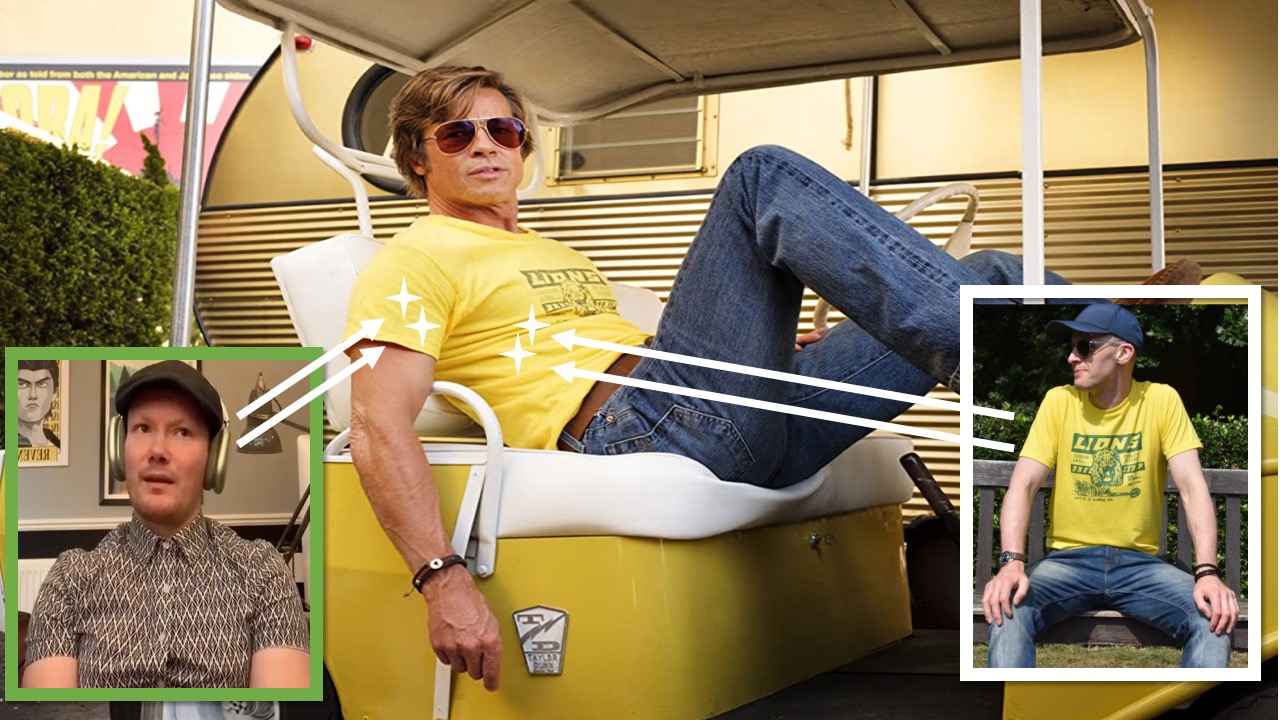 In this episode I speak to Rev about making movie merch. Rev has been designing merchandise and digital art for many years.  I found Rev when I fancied getting that yellow Lions Dragstrip tee, which was a homage to the one Brad Pitt wore as Cliff Booth in Once Upon a Time in Hollywood.

I was quite amazed with the quality, because lets face it, most movie merch tees are not great.  We touch upon what are the best practices, how to respect other peoples intellectual property and that stern comment from Arianne Phillips. It’s a sensitive area, what is homage, what is flagrant lifting of someone else’s designs?

RL: (Rev Level) I’m a digital artist and merchandise maker. I make pop culture video/game inspired and movie inspired merchandise. So mainly t shirts, some hoodies, mugs, and caps and things like that.

PB: How do you go about making these T shirts and talk about the quality?

RL: My t-shirts are embedded into the fabric so it’s not an ink or paint that stays on top. It is a dye that becomes part of the material. So essentially we dye the material with the artwork so it will never be removed. I used to use these Russell Athletic ones but they started to bubble after a few washes, after a year or two of using those I found these ones I currently use so much nicer. A material that is slightly thicker, wears really well, fits nicely etc. 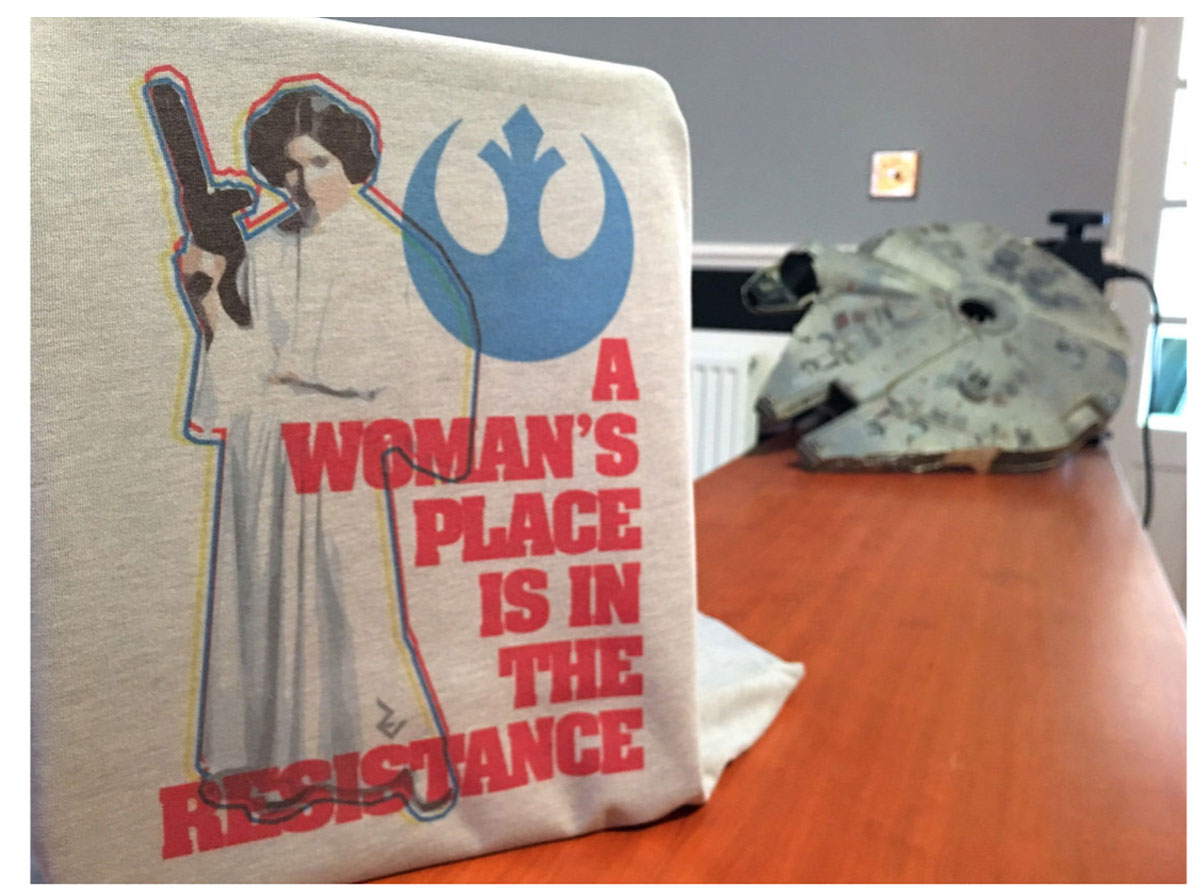 PB: Is there a community out there that’s a little bit hardcore commercially? Star Wars or Twin Peaks etc. Do you find one’s more popular than the other right now?

RL: Twin Peaks is great because it’s got a really dedicated community in itself. And it’s evergreen. So a few years ago, they finally did a third series, which was really overdue. So that’s a good one for people because it’s so much more niche. Yeah, there’s nothing bigger than Star Wars. I don’t do any Vader movie merch because it’s been done to death.

I love focusing on the Death Star. So I do designs that kind of channel that in a different way. So my original was a 70s Disco style approach to the Death Star. And so it was like this Death Star 77; a very colourful disco ball. So just following the silhouette of the Death star designs. I lean on quite traditional, quite bold graphics. 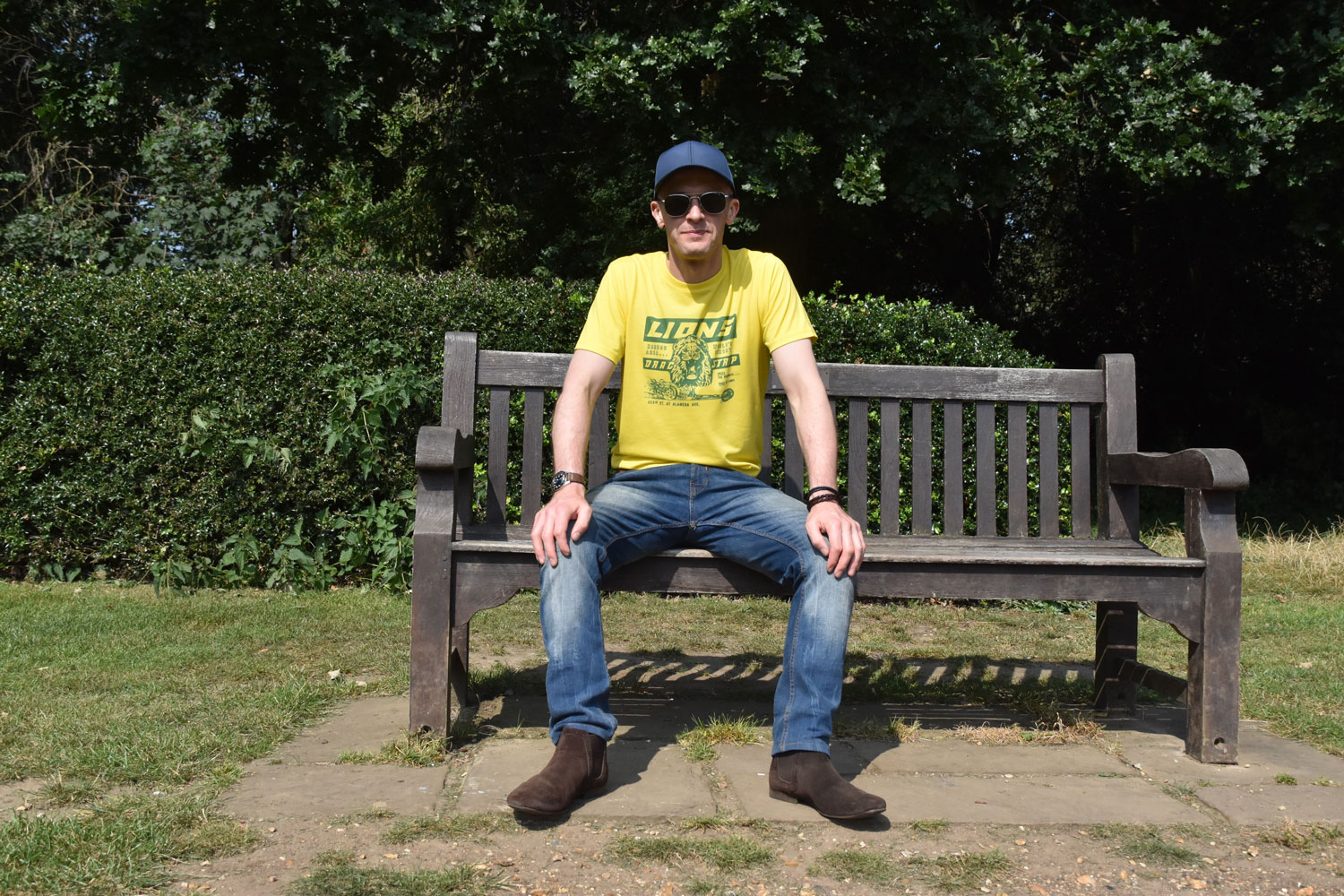 PB: Where are you in terms of what is homage and what is licenced?

RL: Yes, it is murky and grey area. I try to do it in good faith. It’s like you say with the Cliff Booth homage tee, I initially made that design for myself. Cliff Booth was the coolest character in Once Upon a Time in Hollywood and I wanted that shirt. So I made it. And then a couple of people that I saw out and about wanted one. So I’ll make it available. Why not? I couldn’t find it available anywhere. People I know contacted me, they have bought other versions online. They’ve got that transfer-like applied work that’ll pick away. That’s not my goal.

If I was contacted by the relevant sources and say, Please take this down, I will. It has happened before. This type of things that I make are made in good faith. I’m not trying to go up there and place Once Upon a Time in Hollywood logo right in the middle and claim that that’s me. My tagline used to be un-officially cool. That was the concept of the whole thing in my early stages of the business.

I don’t embroider, I can’t produce that. I don’t want the machinery to produce that. Yeah I don’t want to have to teach myself how to embroider. So I’m the only one who works here and produces them. You know, that T shirt that you have. I buy in the blank. But from there, it’s all me. Yeah. 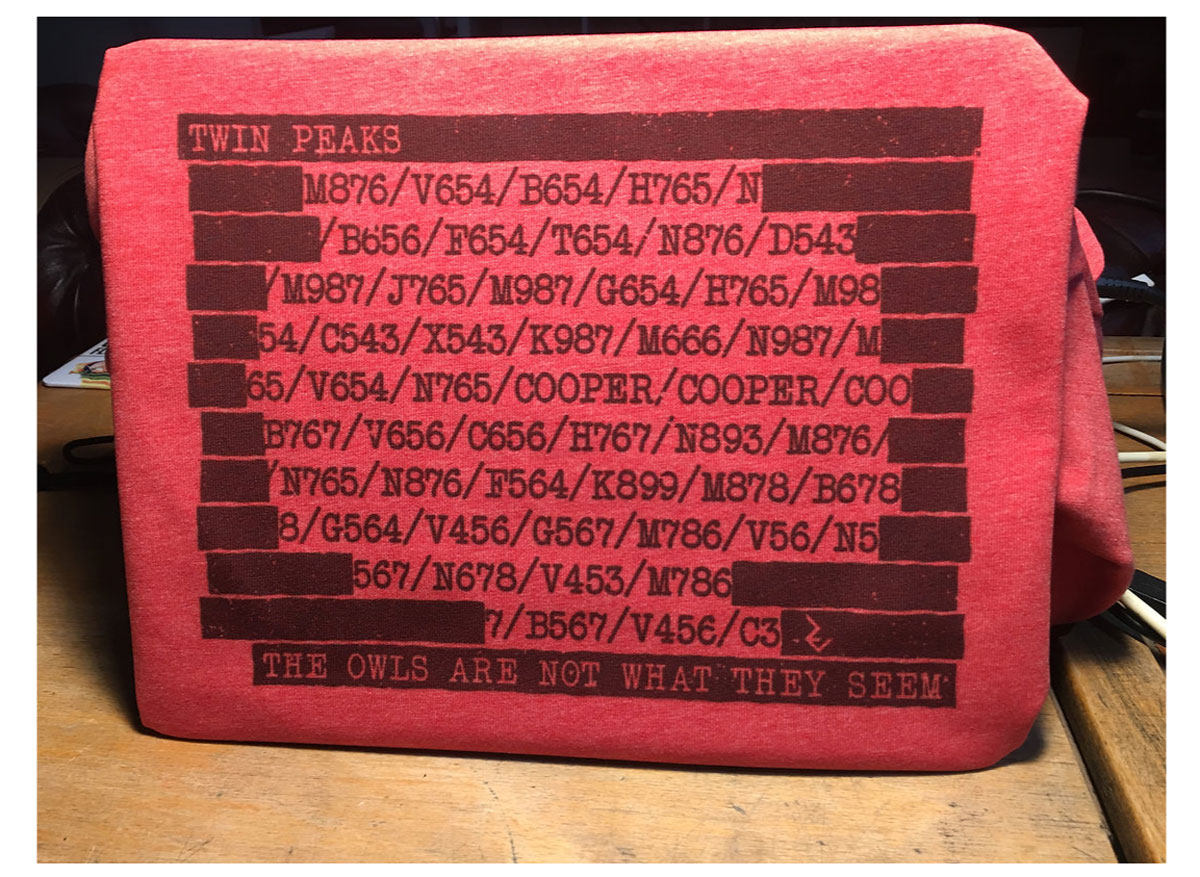 PB: So you, you’ve made a success of this, what advice would you give to people that have kind of gotten a gem of an idea and want to take it further

RL: Depends on how you want to do it and what your approach is, you know, what’s your USP? If you want to produce it yourself and micromanage every minor detail, then you have to get into it deeper, there are different ways to print stuff. The expensive starting block is buying a direct garment printer, you look at 10 grand by printing the materials before you’ve flipped one shirt.

You can go to drop shipping businesses that will produce it for you. Obviously your overhead will increase then per unit, but you’re not having to any initially go straight into planning expensive materials and equipment.

So it’s figuring out which print method is best for you.

And people use vinyl, some people use sublimation, some people use direct to garment. People do screen prints, just these like transfers and things and there’s probably a whole host of ones that I’m not considering but have a look into what the basics are what best suits your approach, and then figure out how to best utilise that equipment.

If you can do something with a little bit small, smaller scale and start an eBay and Etsy business. That’s when you don’t need to dedicate any real heavy space to it. See if you start getting some traction.

PB: You don’t do any Bond stuff?

RL: They’re obviously very carefully protective of their IP. There’s so much iconography that goes with that, you know, and whichever channels you go through, official Bond stuff is everywhere. You don’t need to buy any unofficial Bond stuff. 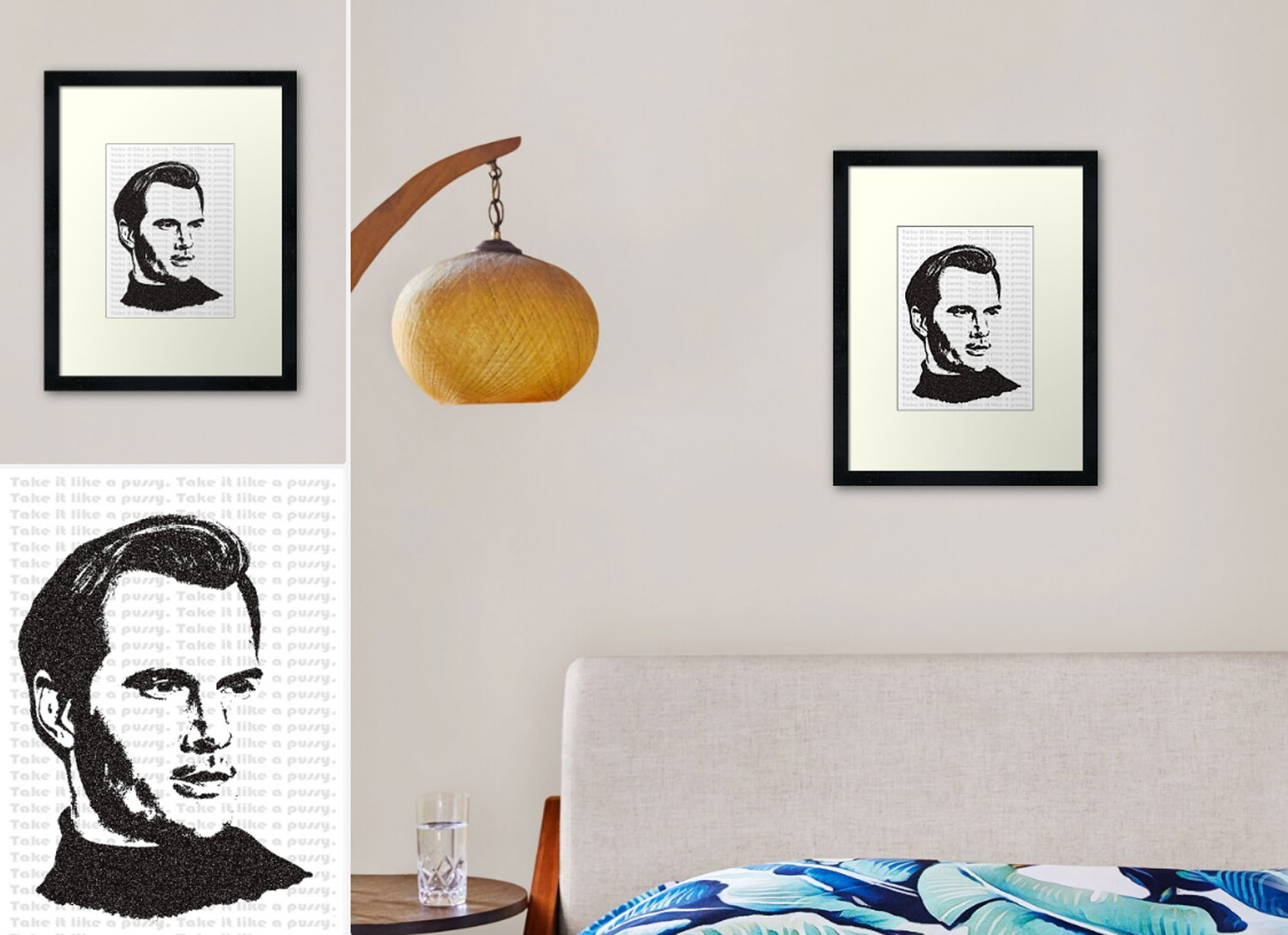 PB: Is RedBubble any good for movie merch?

RL: If you were to sell more stuff on RedBubble, say I want to increase my volume of what I’m selling, it’s about getting more out that can appeal to people just outside of that niche.  There are a million podcasters out there and some of them have decent sized audiences who are looking into getting into the merchandising space.

And I think if your dedicated audiences are enough to keep you happy with what you sell, that’s great. If you need to get a bigger audience, it’s having stuff that can appeal outside of that as well. And so yeah, I think it’s just figuring out what’s the best line for you.

Check out all the movie merch on the Rev Level website. If you’re looking to become a digital artist then this book: Beginner’s Guide to Digital Painting in Photoshop: Characters by 3D Total Publishing has been reviewed well on Amazon.