Goodfellas – Who Made the Suits & Breaking Down the Gangster Style | #157

“Back in Queens all we needed for acceptance was a shiny suit, a pinky ring and a shit load of attitude.” Gangsters & Goodfellas – Henry Hill 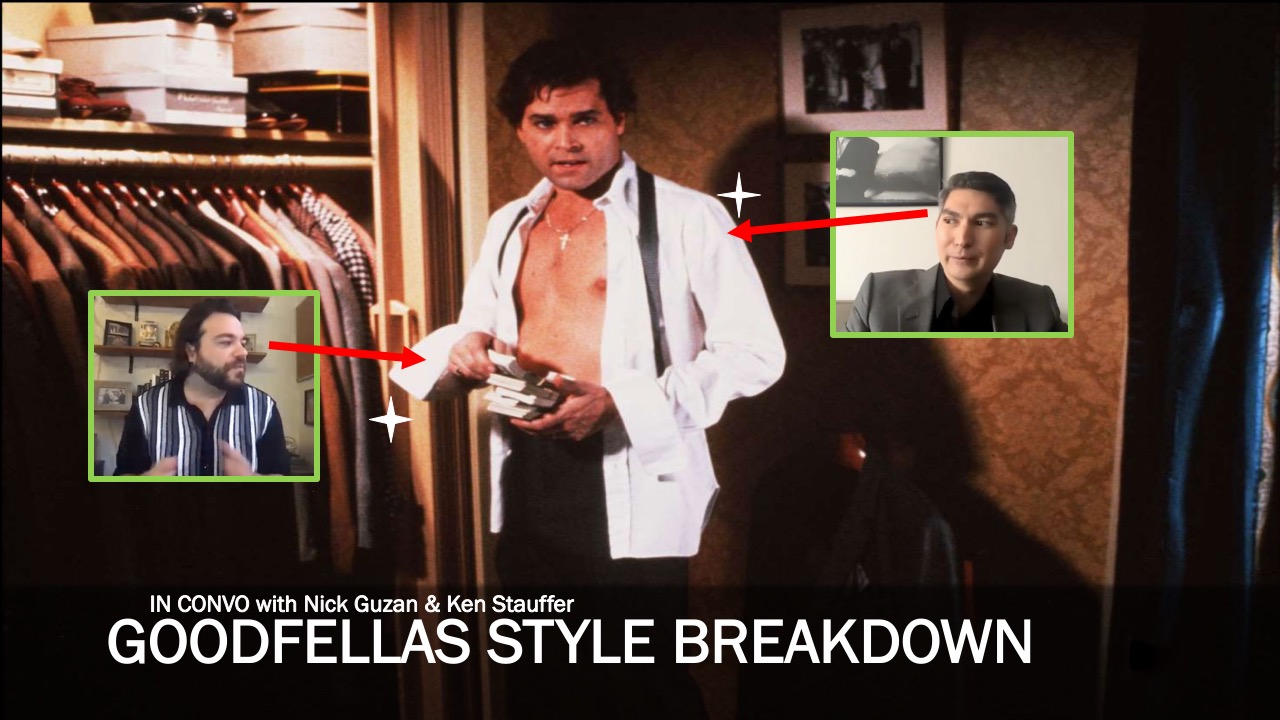 I talk to Nick Guzan from Bamf Style and Ken Stauffer from Oceansographer about the 1990 classic Goodfellas. We take a look at the key style elements, discuss the suits, the shirts and what is classic style? The podcast is available to listen on iTunes, Stitcher or Spotify or in the player below. Some research and moments of the podcast are transcribed below.

(1990) Directed by Martin Scorsese. The Costume Designer was Richard Bruno, Sadly no longer with us died in 2012 at the age of 87. Richard’s filmography includes, Chinatown, Westworld and Untouchables to name a few. Below is an excerpt from the Obituary of Richard Bruno on Variety Magazine.

So who made the suits for Goodfellas?

It was a question I asked in the podcast but couldn’t remember the source. I have retraced my steps and found one article talking about it here,

[…] the American costume designer mainly chose Armani as his favourite label, as shown by the suit given to the main character to mark his official entry into the adult criminal life. 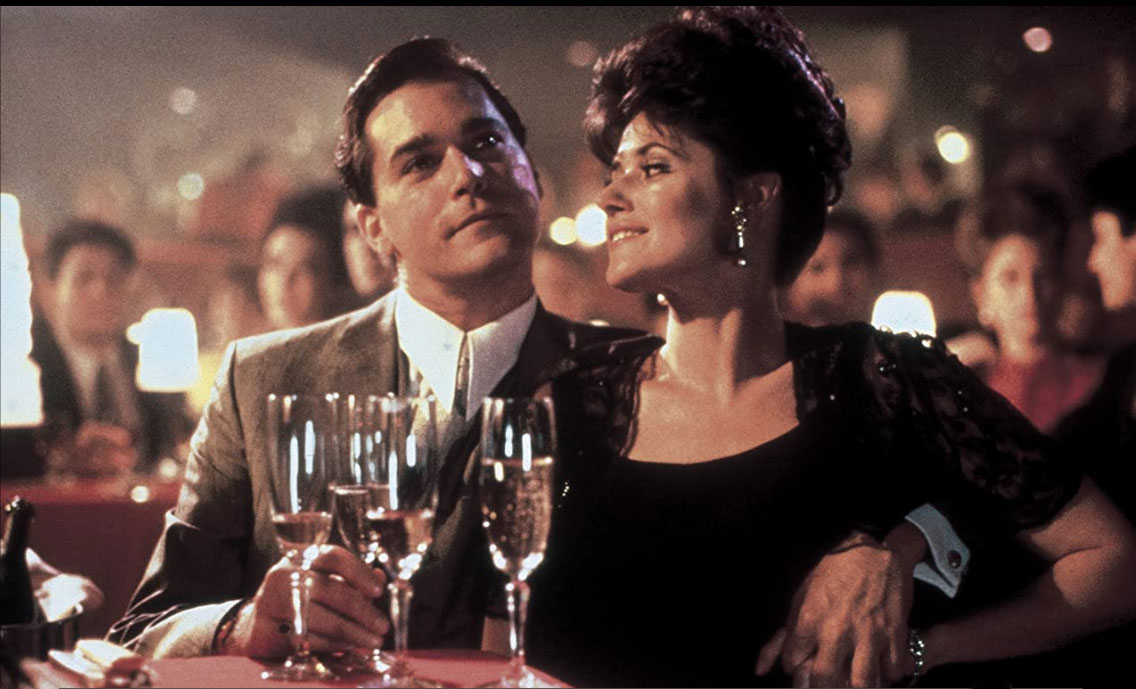 So who made the shirts for Goodfellas?

The spear point collars or Capo Collars are about four inches long and they come down so far. Some of them are so sharp, some of them are rounded. They were all made custom for the movie by Geneva Custom Shirts in New York. Scorsese was so hands on on the movie. He grew up around a lot of wise guys in Little Italy. This is a look that he remembered, you don’t see it very much in photographs. But he insisted, from his own personal recollection that a lot of these guys were wearing these collars with no tie space that went down so far.

They might have just been point collars that were too big. But in his recollection, they look like spear points. So many of you guys are wearing them. Joe Pesci is probably best remembered for them. He’d also worn them, in Raging Bull. He continued to wear him in the Casino and the Wise Guy music video from 1998. Anytime he was trying to get in that [gangster] mindset he wore that same style shirt. 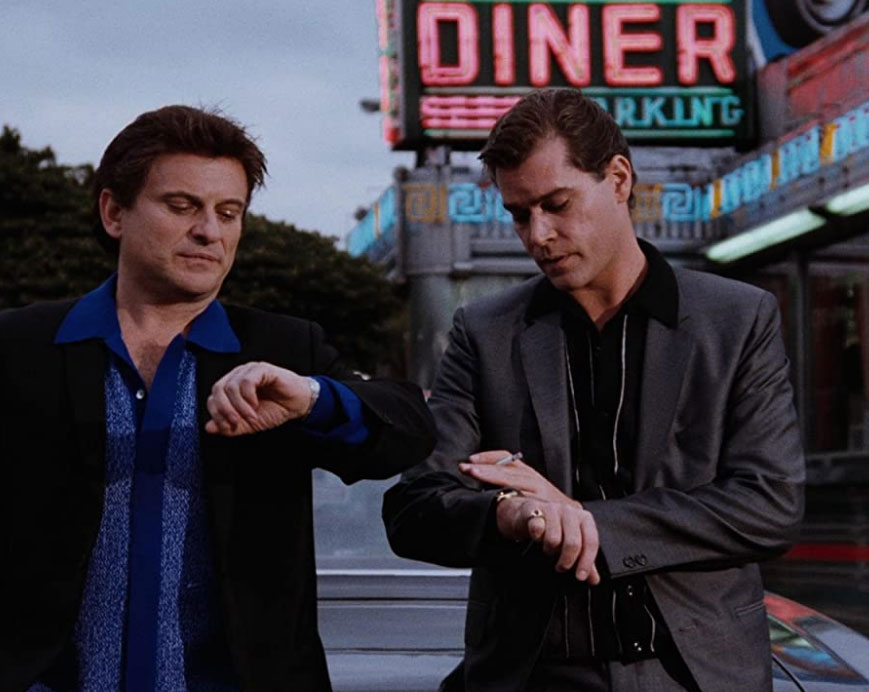 The journey of men’s fashion through the film

The story is presented from 1955 through 1980. We’re really seeing like three primary eras in clothing there. The first is the 50s. Lots of opulence, silk suits, Camp shirts, knits, tons of jewellery, of course, vivid colours. It seems it’s the mobs version of that post war boom. Rather than the man in the grey flannel suit. It’s the man in the grey silk suit with a pinkie ring.

The 60s is more like an extension of that. Especially the scenes in the early 60s where these teenage wise guys like Henry and Tommy are starting to really dress like their mentors.

When we meet the adult Henry for the first time at Idlewild Airport in 63. We’re panning up from those Olive Gator skin loafers, and then over his whole great silk or Sharkskin suit, and then  black and grey striped knit shirt. We talked to Scott Fraser Simpson, about his recreation for that with that era. 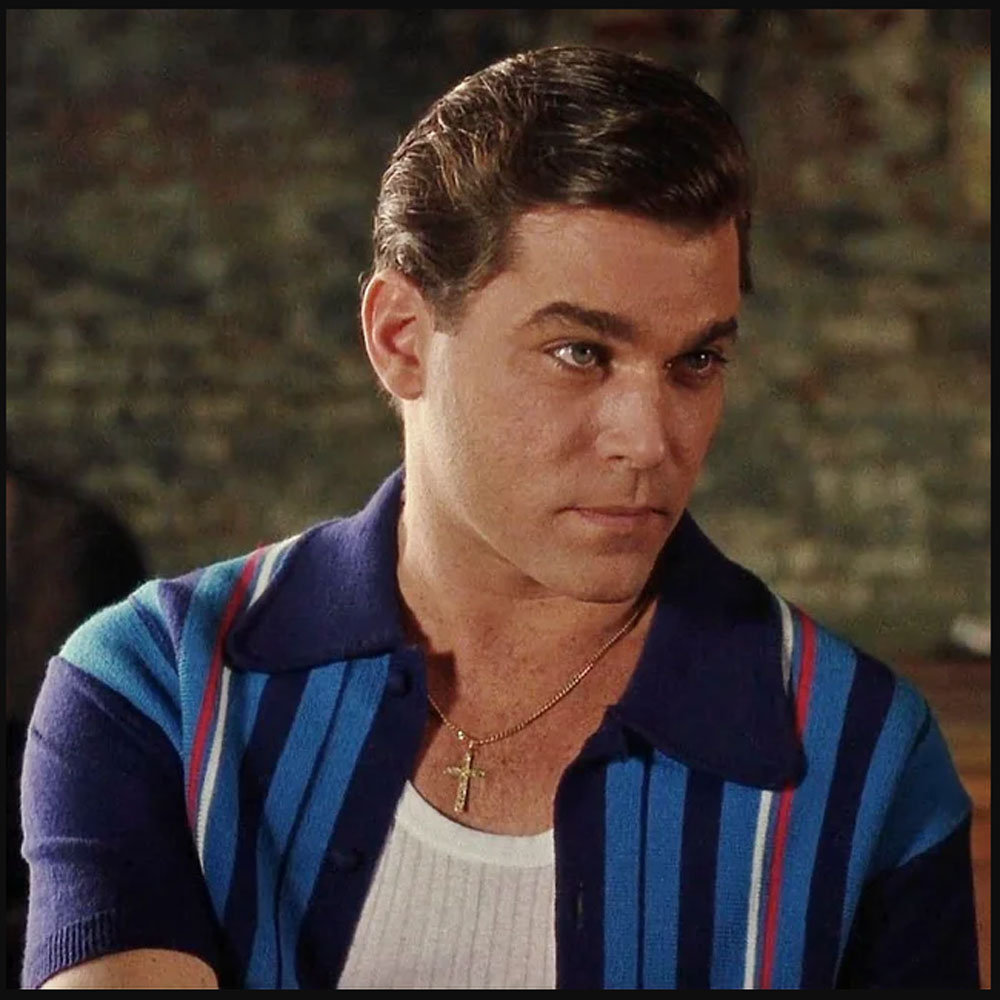 Only the good half

But then in the 60s, it’s these leather jackets. Like  in the scene when Ray Liotta is furious. He gets out of his car. He’s got on that brown leather blazer with a 38 tucked in his waistband. That’s what we associate a really mobbed up look, looks like.

Liotta’s Mum was seriously ill and died during the filming of Goodfellas and he apparently channeled that anger for that scene.

Then we move into the 70s. The leather, the bigger collars a lot more like disco era fashions. And at that point, it seems like the guys and Paulie’s crew really don’t have that much of a sartorial influence anymore. You see less suits and more sport jackets with open collars. They are dressing down at this point (with the exception of Tommy). Then come the tracksuits, which I think in context, came up big after the 72 Olympics. We see Henry wearing that that Navy coloured Adidas tracksuit in prison.

About the look of Joe Pesci

Joe Pesci as Tommy, he does seem kind of stuck in the past. He’s a guy that’s got something to prove his whole life. He’s gonna dress the same as the guys that he idolised growing up in the 50s and 60s. Whenever everyone else might be updating their wardrobes in the decades beyond that he’s still wearing the same kind of silk suits and sport jackets with those big gangster collars and ties. He lives in that anachronism, because even that final shot of the movie, it pays tribute to the great train robbery.

It shows Tommy wearing the pork pie hat far after that would have been a fashionable thing to wear.

I feel like you see Henry and Jimmy and Paulie dress a lot more casually more often. I can only picture one time when you see Tommy wearing knitwear when he’s waiting at the airport in ’63. But most of the time, he’s dressed to the nines. He’s got the tie on. He’s got this suit on. It’s just who he is. 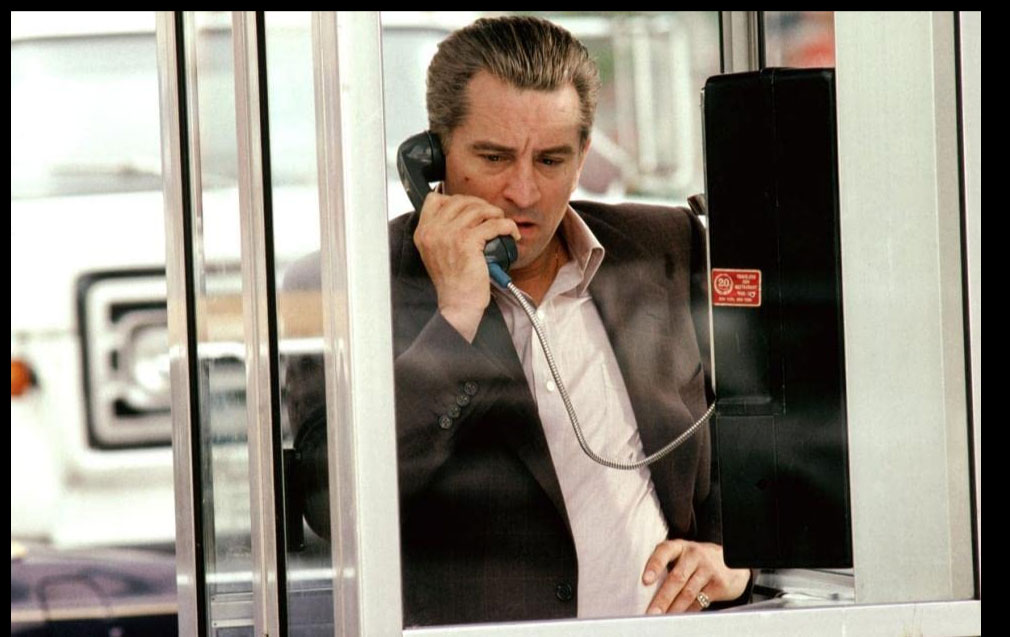 What do you mean he’s gone?

What about Robert De Niro’s character?

Jimmy (played by De Niro) takes on this role as the the elder statesman of the mob. He frequently wears suits and sport jackets, but being an Irish outsider to the Italian Mob, he doesn’t really keep to their uniform. Other than the blue dupioni silk whenever he’s introduced, it’s a lot of muted conservative clothes; grey worsted brown windowpane, etc.

No Blue Jeans in Gangster Flicks?

Director Martin Scorsese told Lorraine Bracco (Karen Hill), that she is the star of the movie. When Bracco heard that, she picked out all the clothes that she thought Elizabeth Taylor would wear. There is also a reference to that emulation in the script, as Henry Hill says, “She had these eyes. She looked just like Liz Taylor“.  Scorsese also told her not to wear blue jeans. However, Bracco really felt blue jeans would be right for the character as they moved into the 80s. There was a compromise so you do see Karen wear white jeans in one scene.

There is a mob rule about blue jeans, in Donnie Brasco. Johnny Depp plays the mob and the FBI informant who goes undercover and Pacino takes him under his wing and he tells him, ‘You know, get rid of those blue jeans.’ 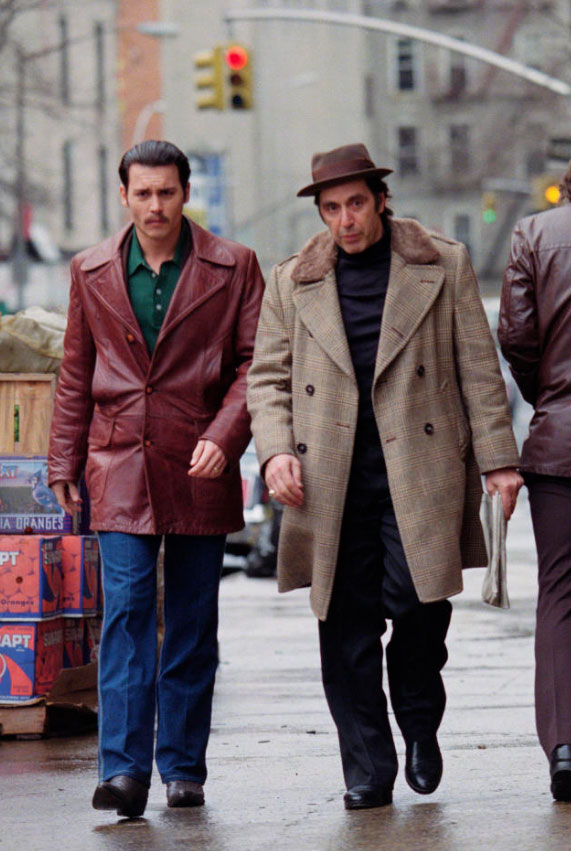 What did Henry Hill wear in real life?

In the book Wiseguy by Nicholas Pileggi he mentions a Brioni that he went to prison in. It’s been awhile since I read that book but I recently read Gangsters and Goodfellas: The Mob, Witness Protection, and Life on the Run by Henry Hill and Gus Russo. In there he also talks about Brioni and shutting down a Gucci store in an airport so he could shop under witness protection. I don’t have direct quotes, sorry. But it’s a book worth checking out, I listened on Audible read by William Hope and the narration is excellent.

There is a shirt worn by Henry Hill on YourProps but the brand is not named. I have contacted the owner for more information, will update the article over time if I receive any correspondence. 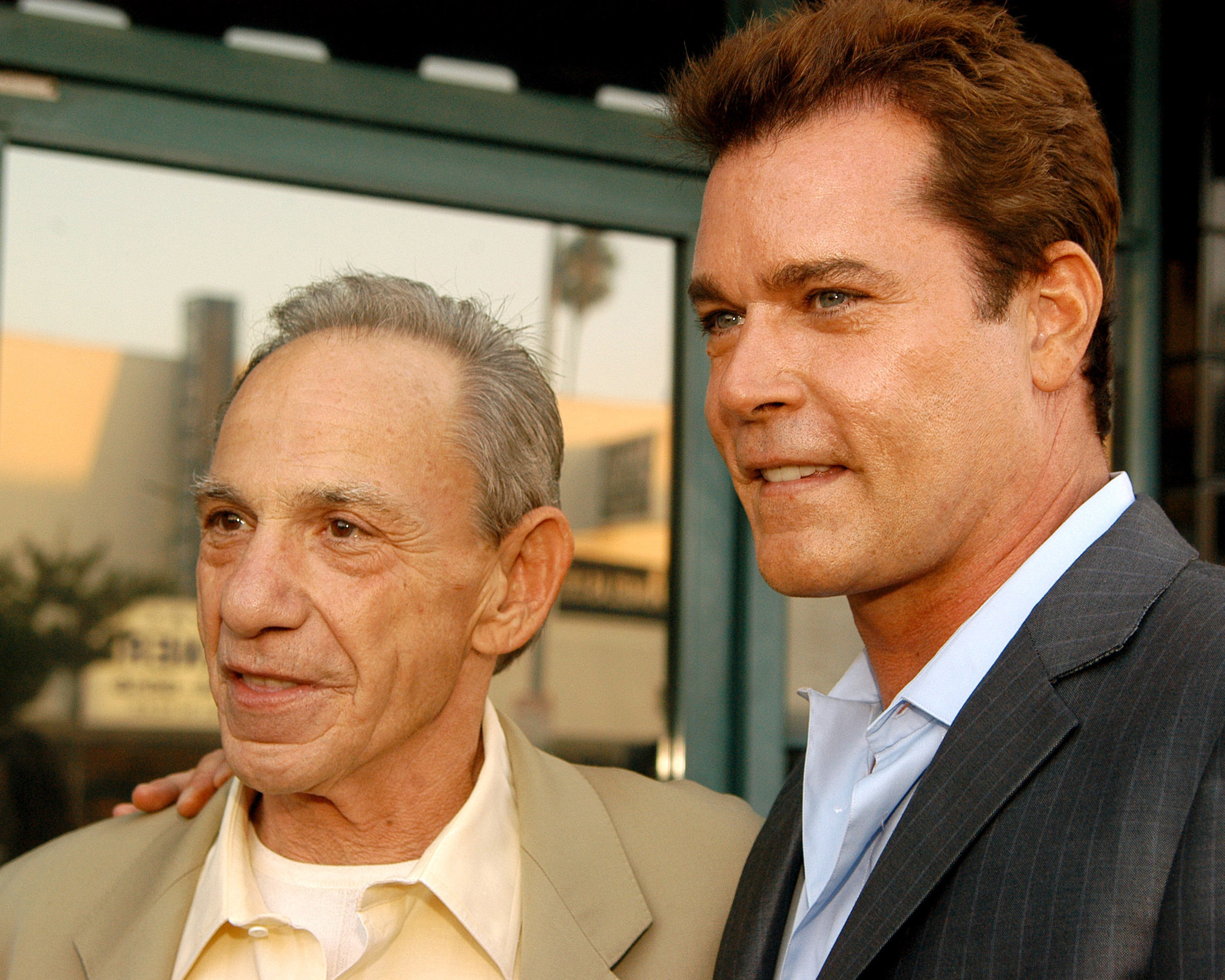 Quick word on the shoes

In the one scene you can see Ray Liotta in his wardrobe, many suits and boxes of shoes above him. On the boxes you can see Bally, and Salvatore Ferragamo. Unsure if these were the actual shoes worn in the movie or just some canny product placement.

Nearly all the images and some quotes were pulled from IMDB. I strongly suggest you check out all the informative and wonderful research and descriptions of the clothes over on Bamf Style.

Well why not get some Art from the movie. One dog is looking one way the other dog is looking the other way, and the guy in the middle is saying what do you want from me? The original in the movie was painted by Nicholas Pileggi’s Mum. Available on Amazon.