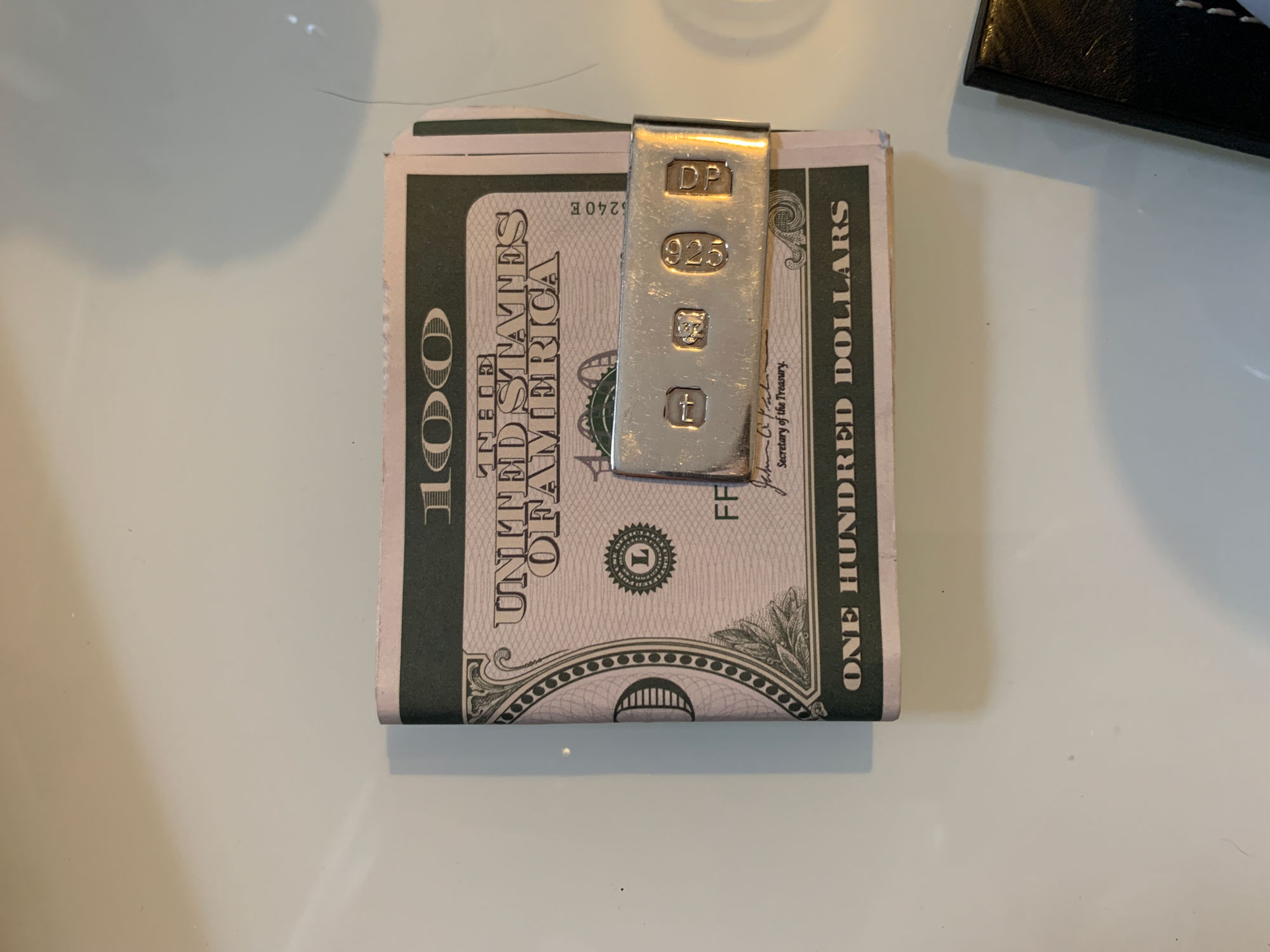 I first came to know about this Douglas Pell Money Clip when I looked at James Bond Lifestyle in 2009. It’s another blink and you miss it items. I still struggle to see it whenever I re-watch Casino Royale. You see it when the Porter comes to give Bond an envelope (containing his cover details) after Vesper and Bond arrives in Montenegro.

He removes the money clip from his right pocket, removes a note with his right hand, transferring the clip (which holds a white Visa bank card and money) to his left hand’s ring and little fingers, whilst also taking the envelope with his remaining free fingers of his left hand. The whole exchange is done in 2 seconds. It is the only time that you see this in the film.

It’s possible he uses the money clip when he pays for his Ocean View villa at the One and Only Club. However, when he does go for his credit card it is out of shot.

We have a winner

The first time I bought the Douglas Pell Money Clip I had just won some money on a National Lottery scratch card. I don’t normally get scratch cards, and I don’t know why I bought one either. But I did and I won £50. At the time my wallet was looking a little worse for wear, and I thought streamlining my wallet down seemed like a good idea. I was carrying far too many bank cards, loyalty cards, business cards and other nonsense in my wallet, which I really didn’t need. So, the idea of having less appealed.

I purchased it using a link and a discount code from the James Bond Lifestyle website, the link is no longer available, and I cannot remember the company I purchased it with. 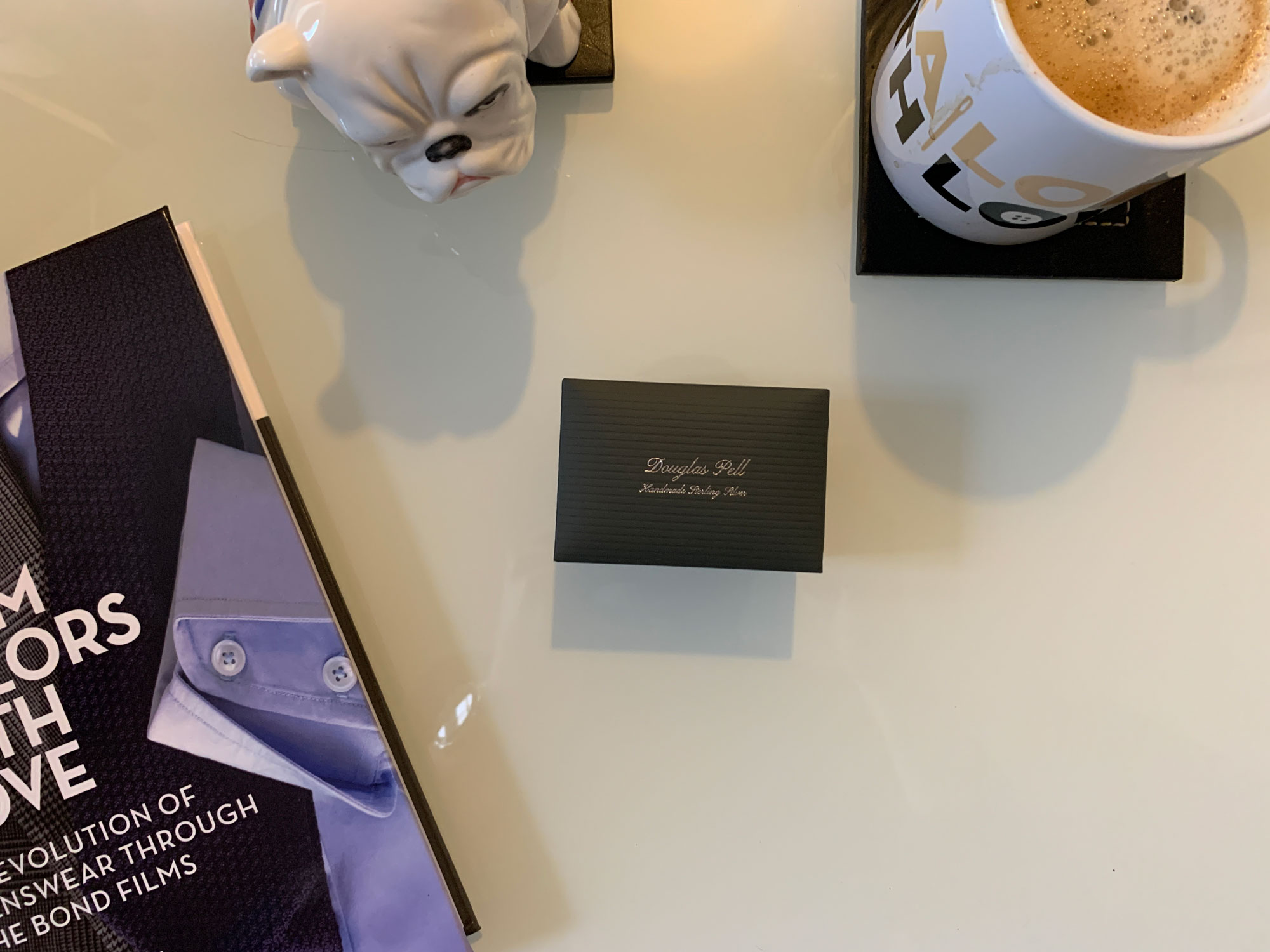 The money clip is made of sterling silver, measuring 50 mm x 18 mm, it displays 4 symbols. DP for Douglas Pell. The number 925 in an oval meaning it contains 925 parts per 1000, the oval stands for silver. The leopard head for the London Assay Office. Finally, a letter, which represents the year it was made. Although I bought mine in 2010, it has a letter ‘I’ which means it was made in 2009.

My intention was to carry some cash, my driving licence, and a bank card. Which slowly increased to include an Oyster card when I started working in London. Over time, the clip started to widen, to the point that the cards started to fall loose in my pocket when I didn’t have any cash to carry. I even at one point lost the clip out of my pocket, luckily for me it was found, with all the cards, but the cash had been taken.

Another issue I had was that I kept putting loose change or me keys in the same pocket, which caused several scratches on the clip. This isn’t the fault of the clip, it’s with me forgetting what I’m doing. After about 2 years of using the money clip, I reverted to using a wallet again. 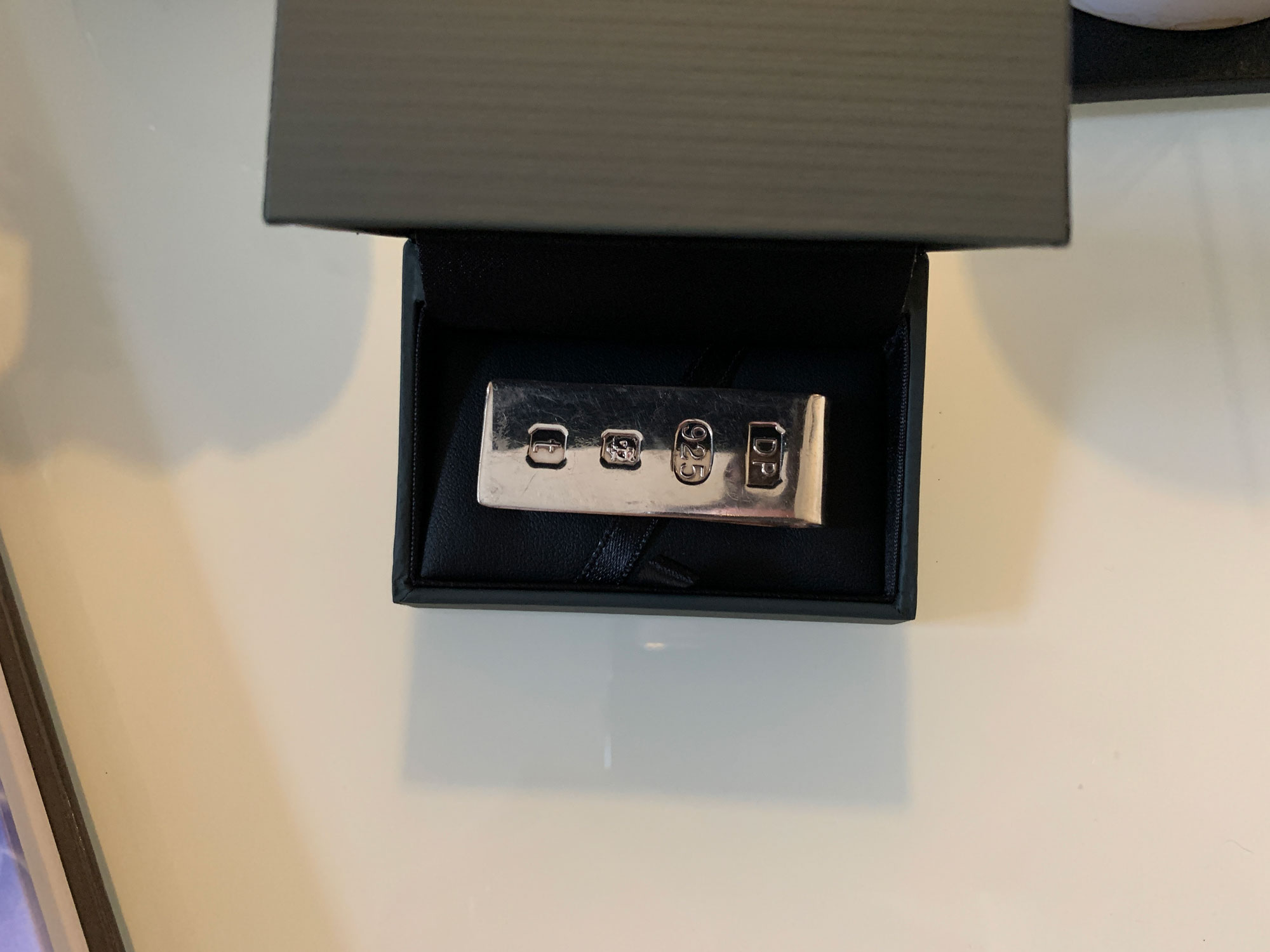 After some years using a bill fold wallet, I again began to feel that I was carrying a bulky item, either in my jacket’s inner breast pocket or the back pocket of my trousers. Again, as well as Bank cards, I was carrying store cards for Tesco, nectar, Starbucks, and several others, which I didn’t need all the time. So, I looked to streamline down again. And I bought a slim line credit card holder, which has 5 slits for cards (I carry 6).

This helped me a lot, no longer needing to carry store cards (moved over to the apps) I was just carrying the essentials. However, I felt I needed something to carry my cash, so I went back to the money clip.

My old one was now too out of shape to use for the small amounts that I’d be carrying, so I invested in a second Douglas Pell money clip which I bought in 2019, which has the letter ‘T’, again being made the year before in 2018.

This time around I would only use it to hold money, no cards! And to begin with it went well, I have had no problems, other than putting it in a pocket with keys or coins in, so again I have scratched it a little. The shape has remained the same, so can add notes to it without fear of them falling out. 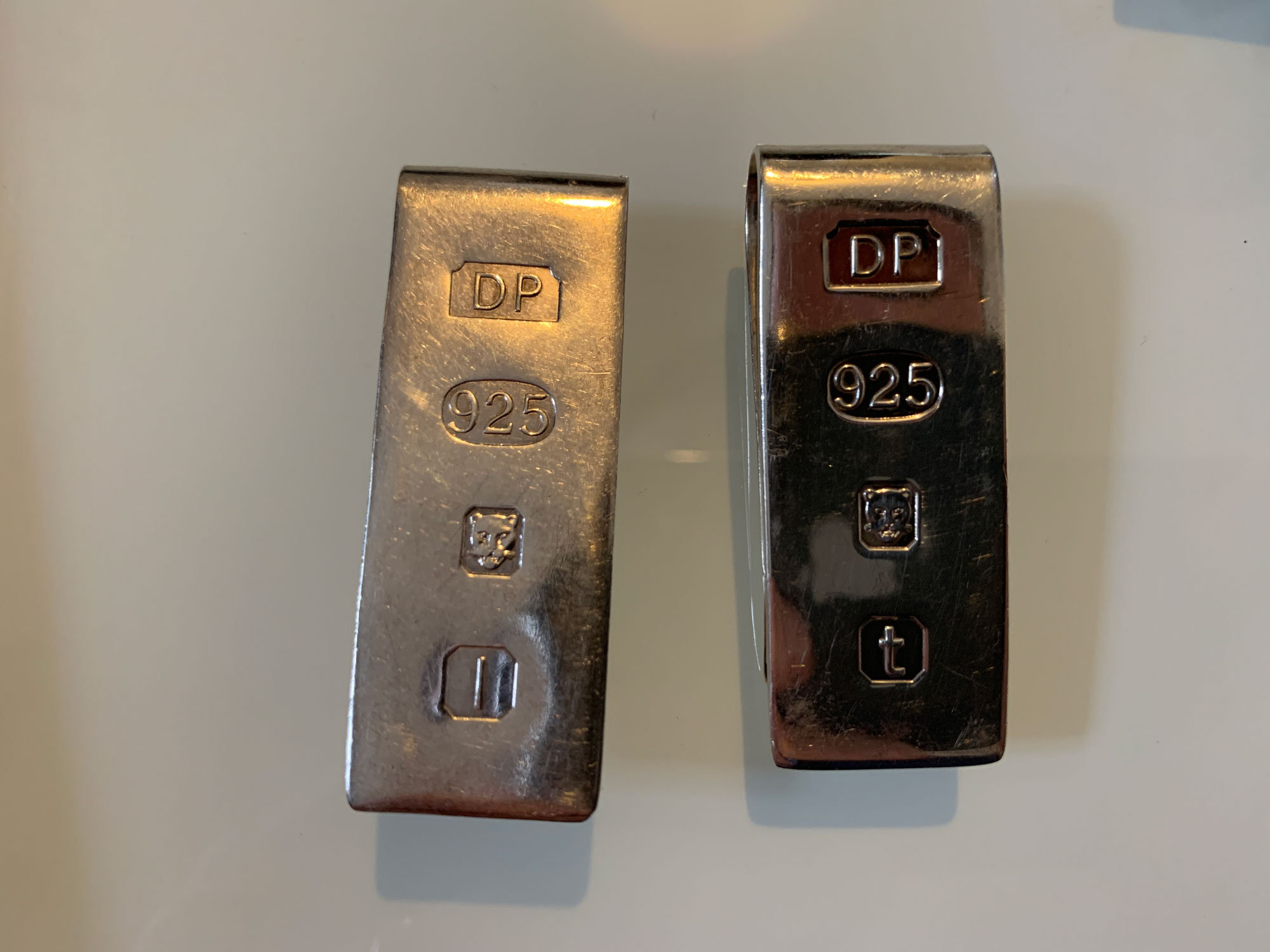 The one small drawback I’ve had with the money clip in the pandemic is that no one has been using cash, favouring contact less cards or paying by mobile apps (such as apple pay). Until last week where I had to have cash to buy a copy of The Big Issue, I’ve not held any cash since March 2020. So once again the money clip resides in its box, waiting for a day when I’ll be collecting some notes from the cash machine.

In some ways, I’m not sure I have the need to carry cash anymore. My phone is now so secure that I can pay almost any amount via contactless that it kind of seems redundant.

The only times now would be for the small amount of people who have no access to contactless equipment. But it probably won’t be long till that’s resolved. The money clip may become one of those items a few people carry around, like a pocket watch, because they “like to do some things the old-fashioned way”. If that does happen though this is the money clip to have! It is beautifully presented and makes a very nice present to those Bond fans in your life. Just remember not to over fill it, just stick to cash and one card, it’ll last longer that way! 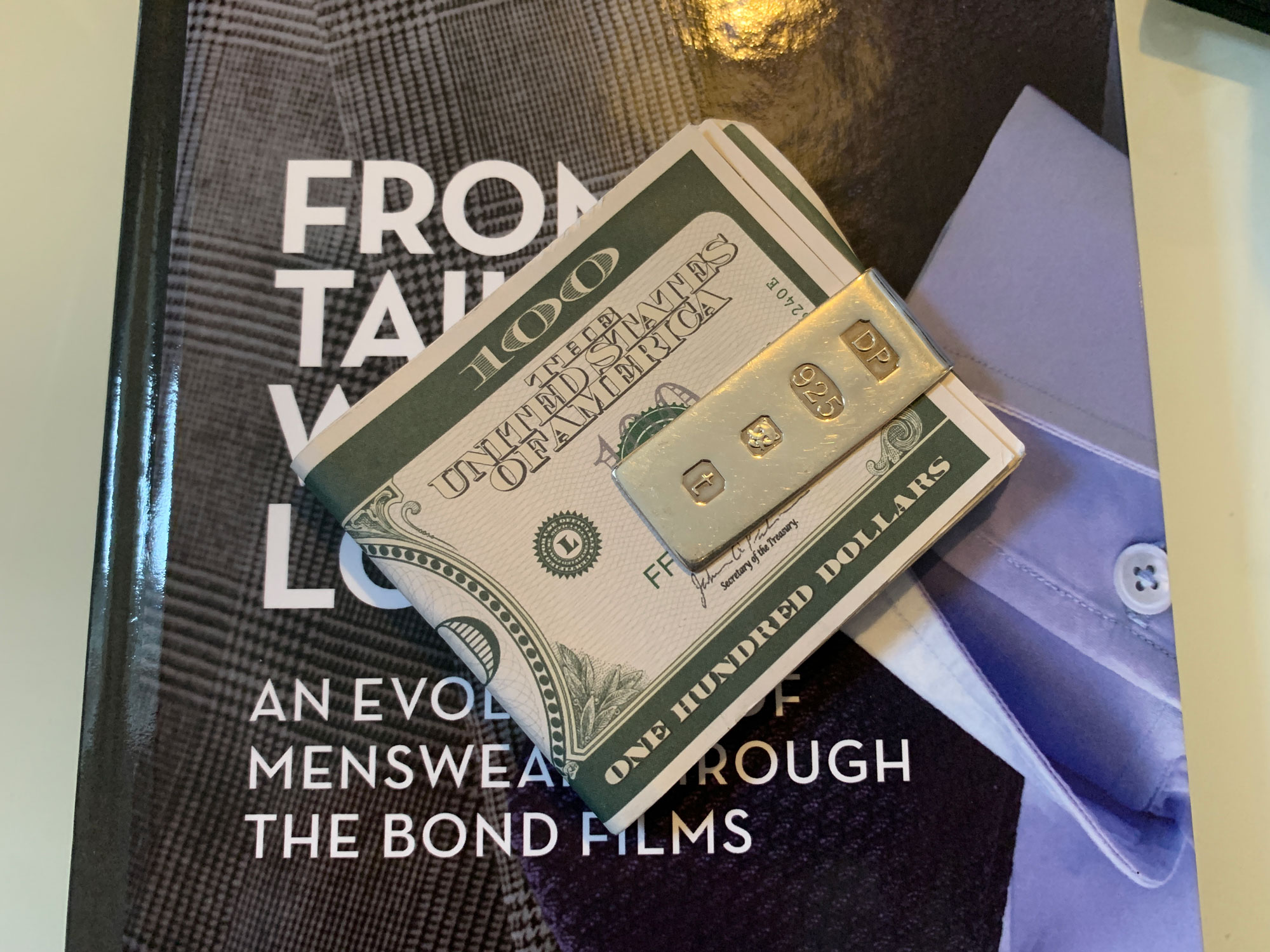 Photos of Daniel Craig as James Bond taken from the YouTube video entitled “Vesper and Bond Arrived in Montenegro | Color Corrected Demo Reel | Casino Royale (007) Scene 4K.” Used here under the fair use doctrine. Be sure to check out more reviews by Daniel Gaster. Follow Daniel on Instagram.

You can also find out more about Douglas Pell and the money clip through their website. Seemingly however, you can only buy through them if you have a trade account.