The movie while being stylised is mainly a style free zone when it comes to the cast’s wardrobe.

I’ve tried my best with no information about the wardrobe online. The costume designer Louise Mingenbach has no social media presence either, so I’ve had to rely on rewatching the movie and screenshots kindly provided by Pete.

In The Usual Suspects, everything is oversized and horribly ill-fitting. The wardrobe could be almost from any movie from 1980 onwards as it’s totally unremarkable. As the movie had a rushed 5-week shoot, while on a very tight budget, it’s obvious wardrobe wasn’t a priority. I have a feeling the actors were asked to choose from their own wardrobes what they imagined the characters would wear. But that’s only my opinion. I’ll start in order of awfulness;

Who by day is a car mechanic by evening a petty crook. His blue collar average Joe persona wardrobe is as American as baseball. He looks like his only motivation is the first bud after “work”. 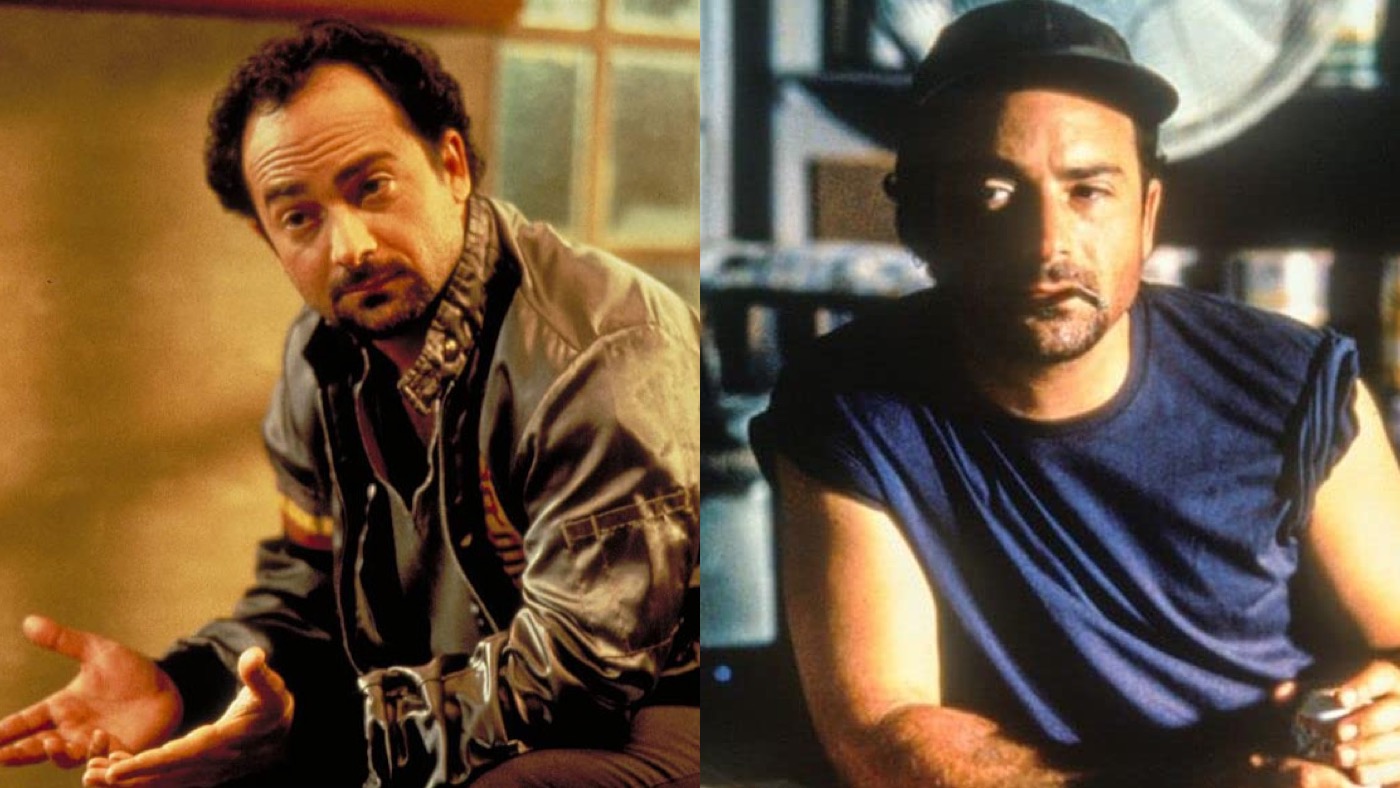 The red shirt under his black suit marks him out as someone who likes to be noticed, his height along with his bright red shirt certainly do that.

McManus is always head to toe in black. His leather jacket seems inappropriate for the heat of California, but it conveys the macho image he wants to present. 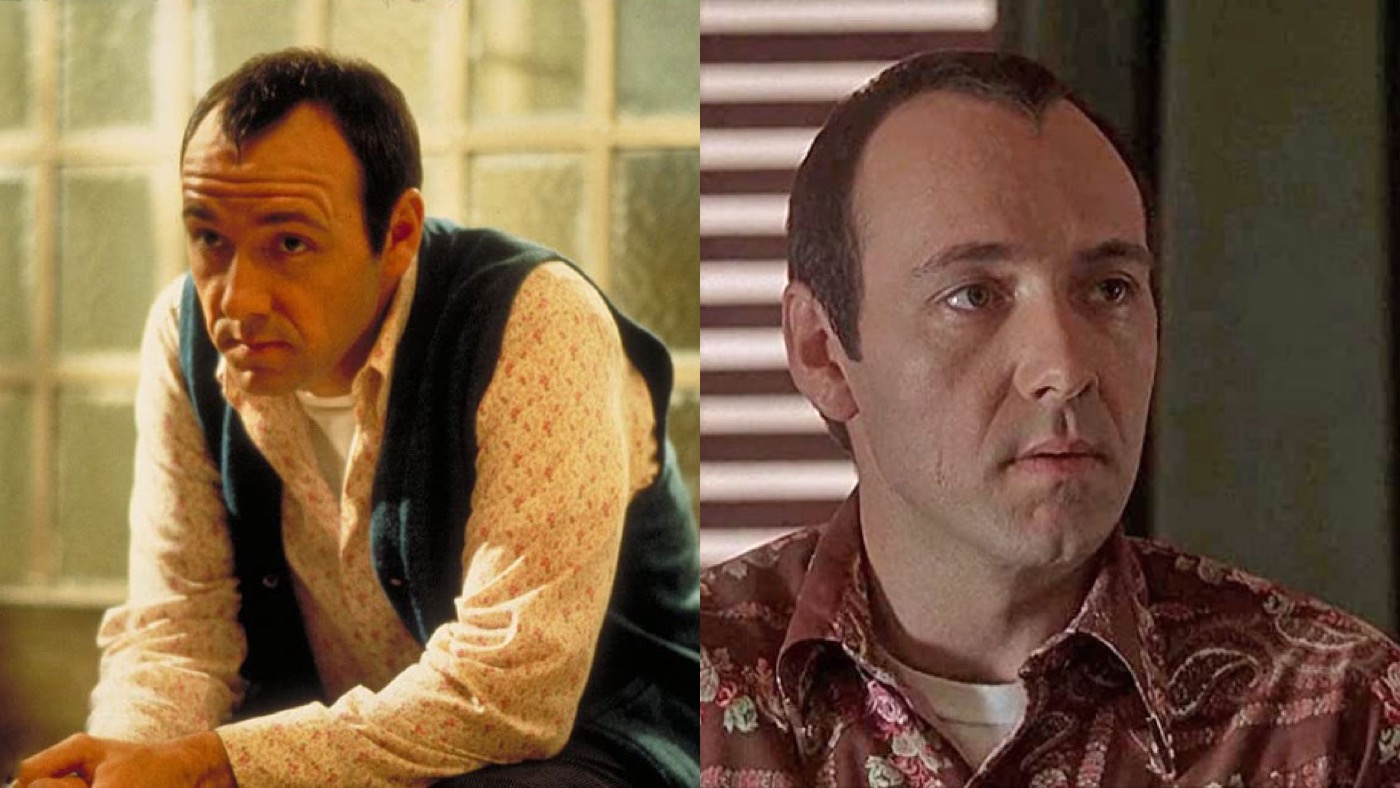 A con man who has cerebral palsy, walks with a limp with his left arm all but useless. A figure of derision and pity who nevertheless wears bright floral shirts (that remind me of Liberty prints from the distinct London department store) usually under a waistcoat to no doubt convey that he, in spite of his handicaps has a personality. 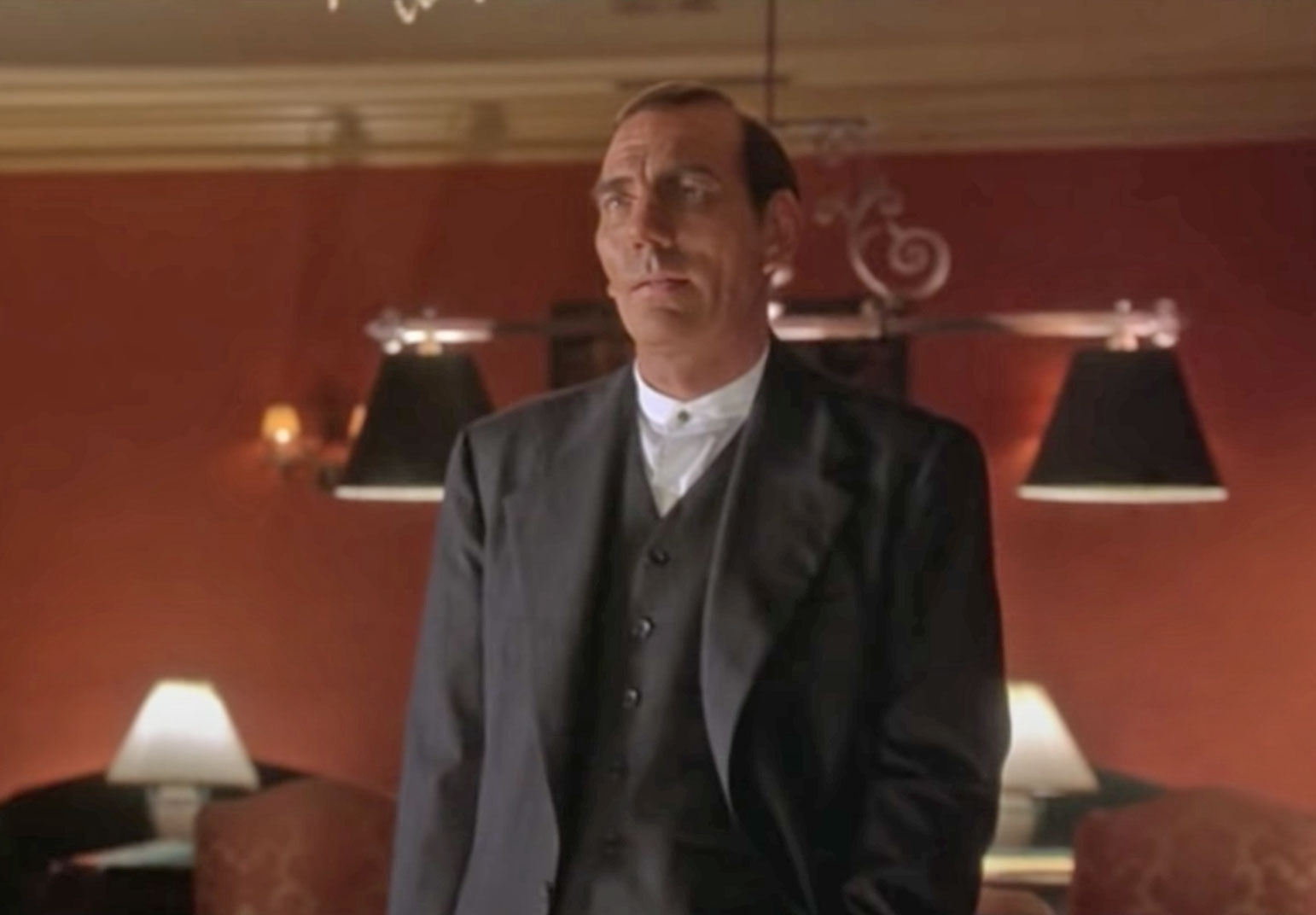 The only item of clothing of his that caught my eye was his oversized 3-piece black suit. The wide lapels of the jacket make him look like a 14-year-old on his first day of the school year wearing his 18-year-old’s brother’s discarded uniform. He pairs the suit with a white Mandarin collar shirt fastened with what appears to be a pearl top button on his first appearance. 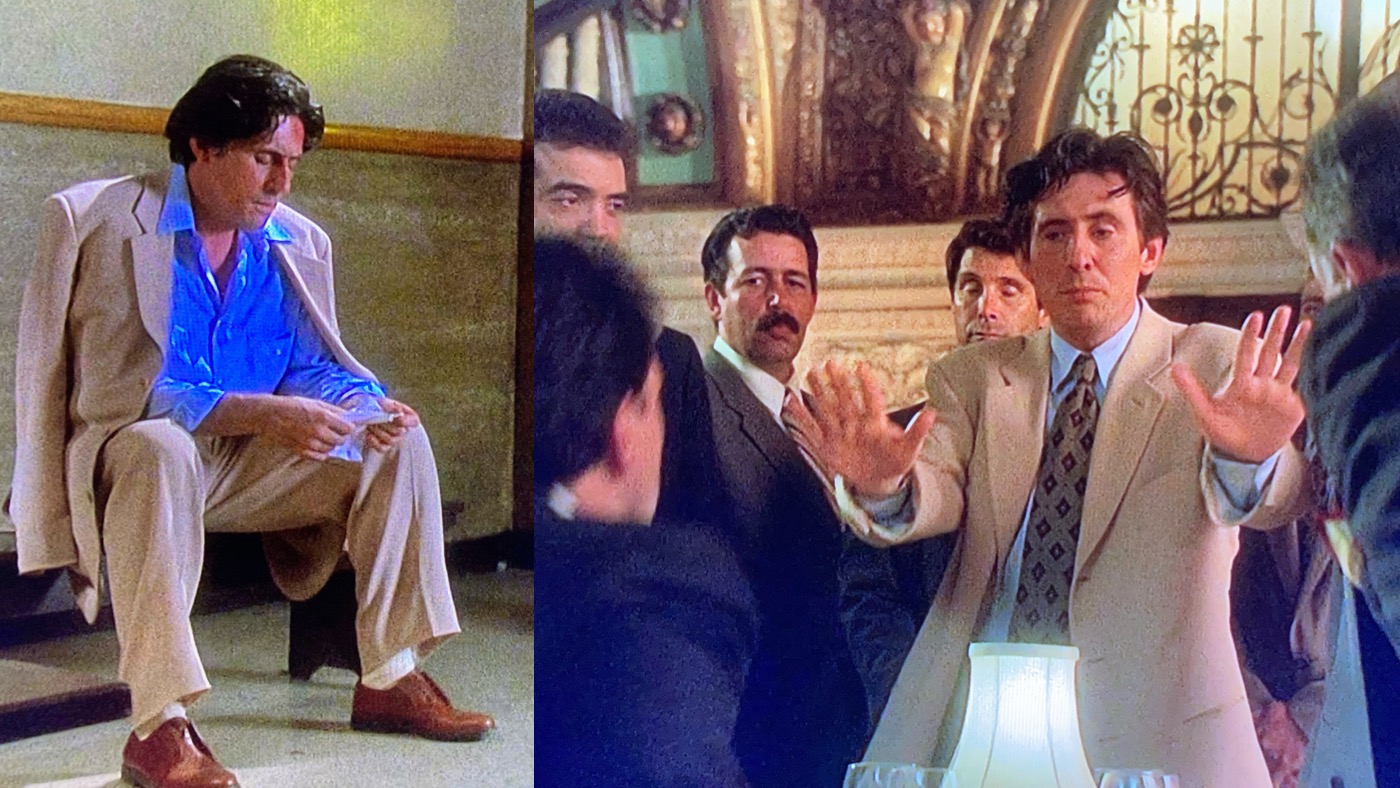 His beige suit reminds me of the actor’s namesake David Byrne, who wore a vastly oversized suit for his performances in his “Talking Head” day’s. Keaton’s suit has enough excess fabric to outfit the Cutty Sark for its record-breaking voyages. He redeems himself with a diamond patterned tie and mercifully a pair of brown (not the ubiquitous black) lace up derby shoes with a chunky rubber sole.

There are two redeeming characters who thankfully wear clothes that have a good fit & proportion.

All his suits while dated with its loose cut and wide lapels do at least fit. As an agent sure of his authority & ability, he is used to asking questions and used to dealing with professional crooks. He conveys exactly the right tone with his attire. An authority figure but not a knuckle dragging bully. 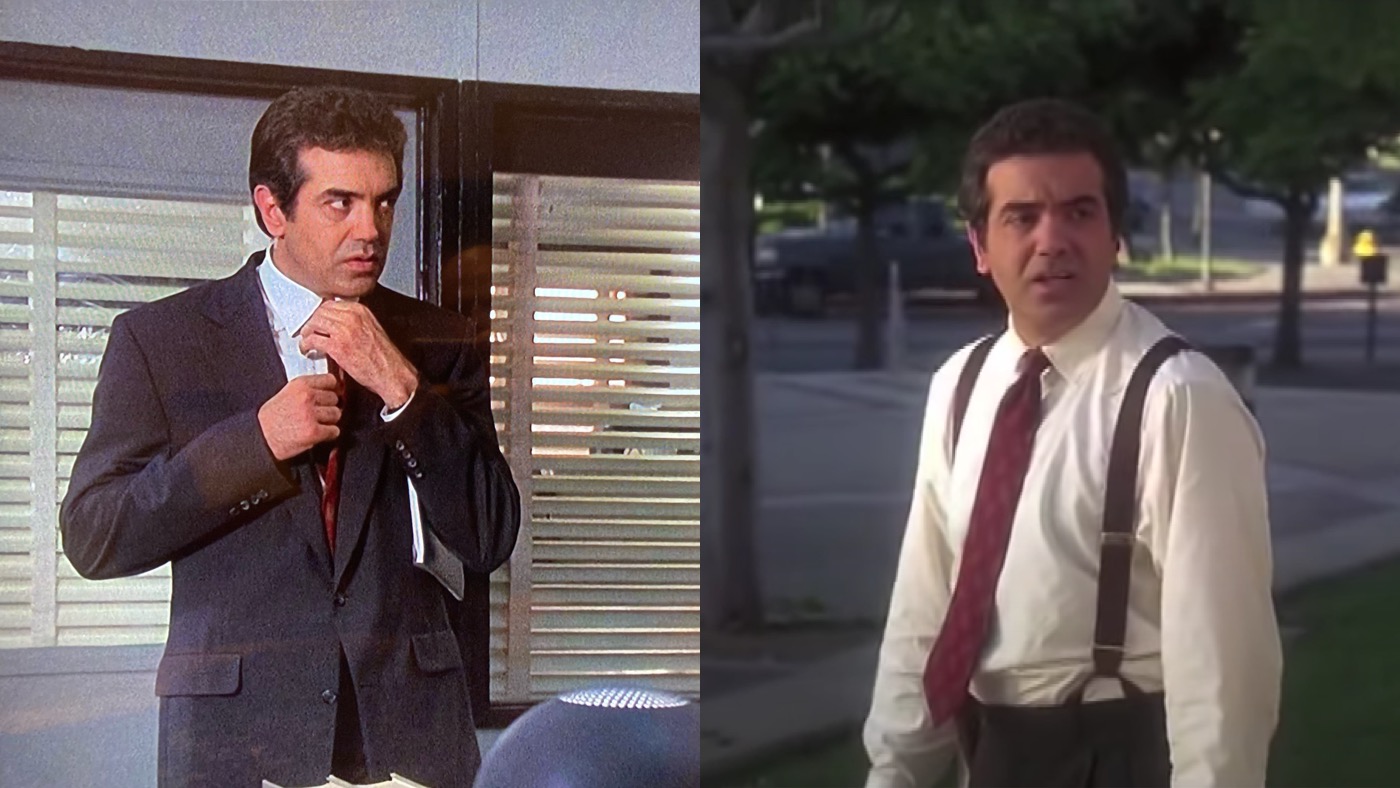 His high-waisted trousers are secured by braces for a perfect and more comfortable fit. (Trousers secured by braces can be worn looser in the waist). His ties with floral patterns are the only concession to his “uniform”.

His shirts in white & ecru are always immaculately pressed.

He is someone who not only cares about his appearance but knows he has to convey his authority. Dressing badly would not be suitable for someone in his position. His role was shot in a week, I’m certain he provided his own wardrobe as he is usually wearing a suit when not acting.

The sartorial saving grace out of all the characters in The Usual Suspects, but the bar was set for a limbo dancer. The first time we see Agent Baer he is wearing a light grey suit which is just a little too big for him but at least it’s a colour more suitable for California.

What makes him stand out for me is the small brim trilby hat we see him wearing. Esposito wears hats regularly at events & red carpets. I suspect it’s one of his own. Perhaps the famous and expensive Italian Borsalino? 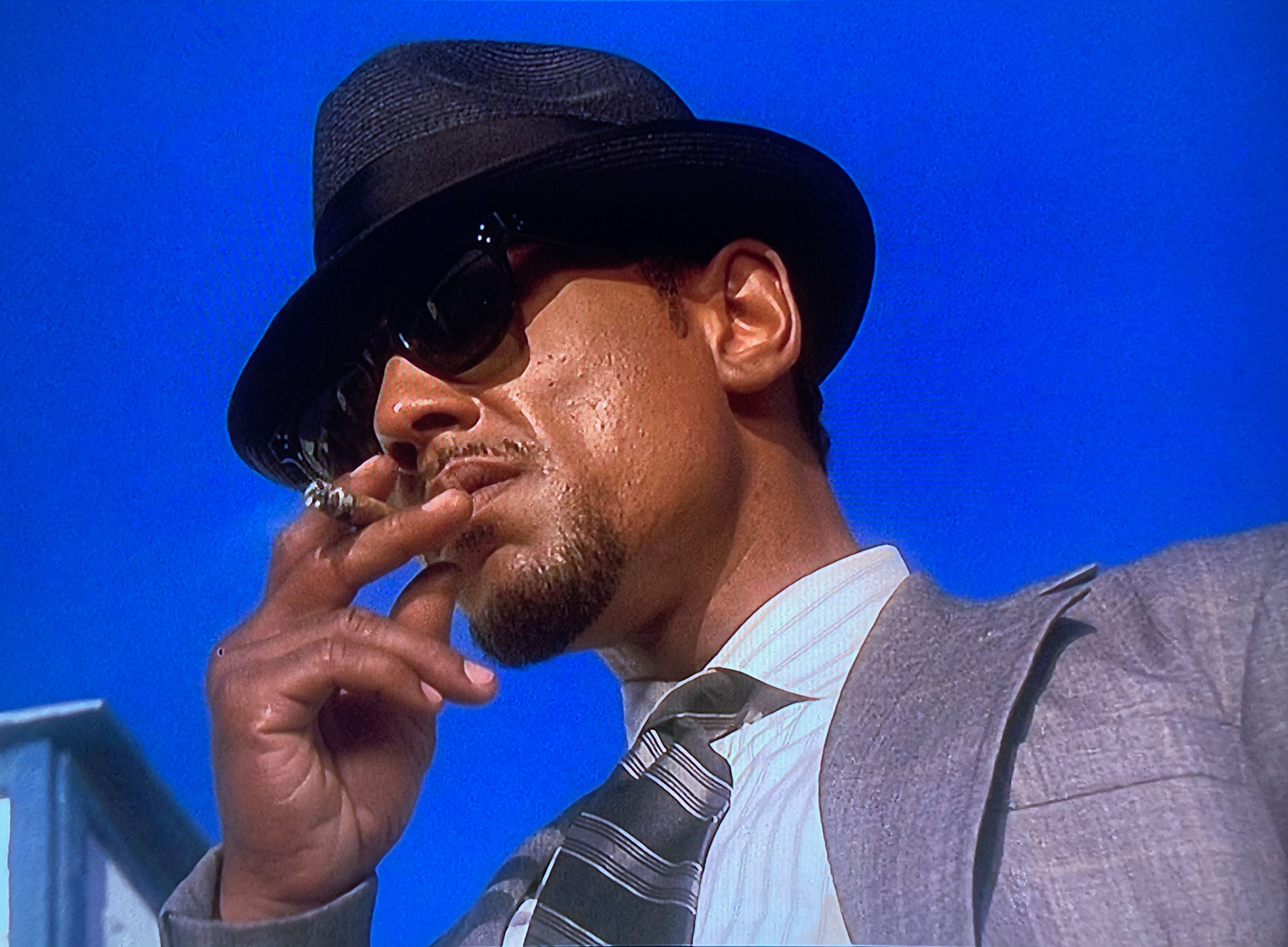 His shirt is a striped cream pattern paired with a brown, black and white striped tie with right to left diagonal stripes in the American fashion. British ties are the opposite (heart to sword).
I would have liked to have gone into more detail but even watching the movie several times the detail of the wardrobe of the character’s is difficult to make out. If anyone hasn’t seen The Usual Suspects you need to. It has one of the greatest dénouement’s in movie history. 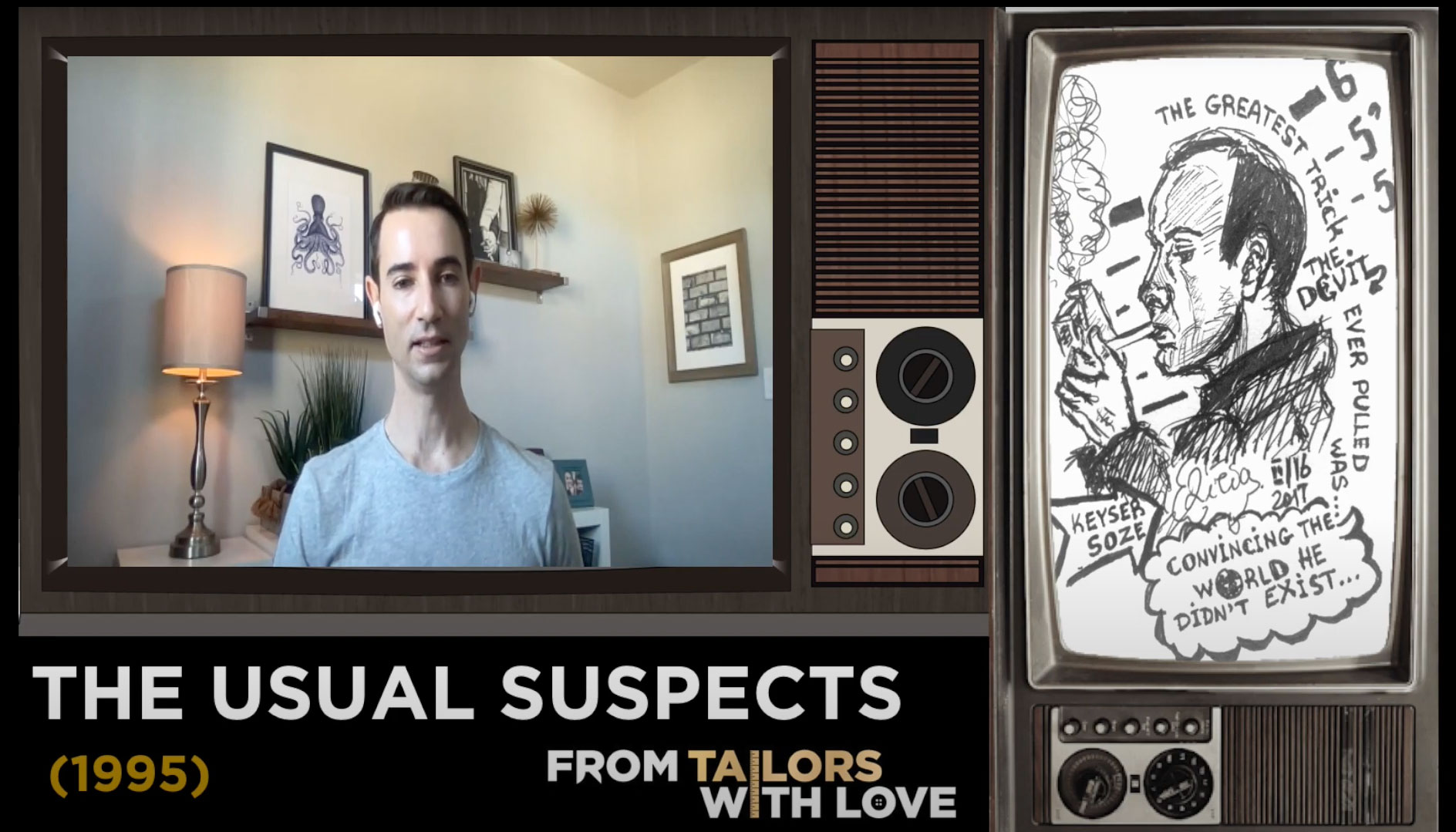 The full interview with Bobby Morelli from Matched Perfectly about The Usual Suspects is available to listen in the player below or on iTunes, Stitcher or Spotify. Don’t forget to leave a review on your smart phone.

Special thanks to Sajid from Niven Tailors for doing these show notes. More articles and inserts from Sajid can be found here. More importantly don’t forget to follow him on Instagram.

Some images within this post are the copyright of their respective movie studio and are reproduced here under the Fair Use doctrine. Mainly sourced from IMDB, and screen grabs from the Blu Ray which I purchased especially for review.

The Usual Suspects is available to buy on Blu Ray, (in my collection). I can’t find any decent books on Kevin Spacey or Benecio Del Toro, to recommend. So I’m plucking for this incredible Vintage Poster that will be nailed on my wall in my future podcast studio/home cinema.