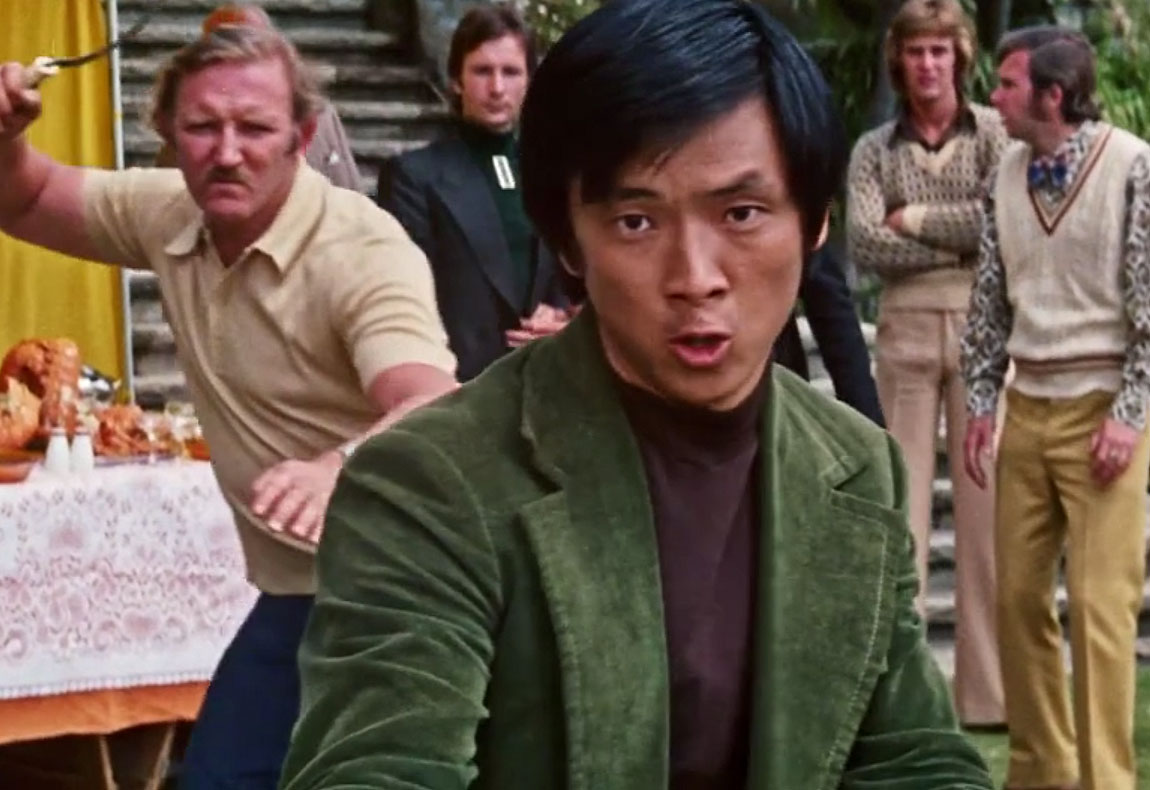 Is this Green Corduroy Fight Suit the most totemic of the 70s era? Featured in The Man from Hong Kong, currently streaming on Amazon Prime in the UK.

For Bond fans George Lazenby doesn’t rock up until the 34th minute. I was starting to question what I’d gotten myself into. Matt Spaiser doesn’t rate this film, however if you’re a fan of 70s clavinova, Kung-Fu and corduroy then there will be no better cocktail. 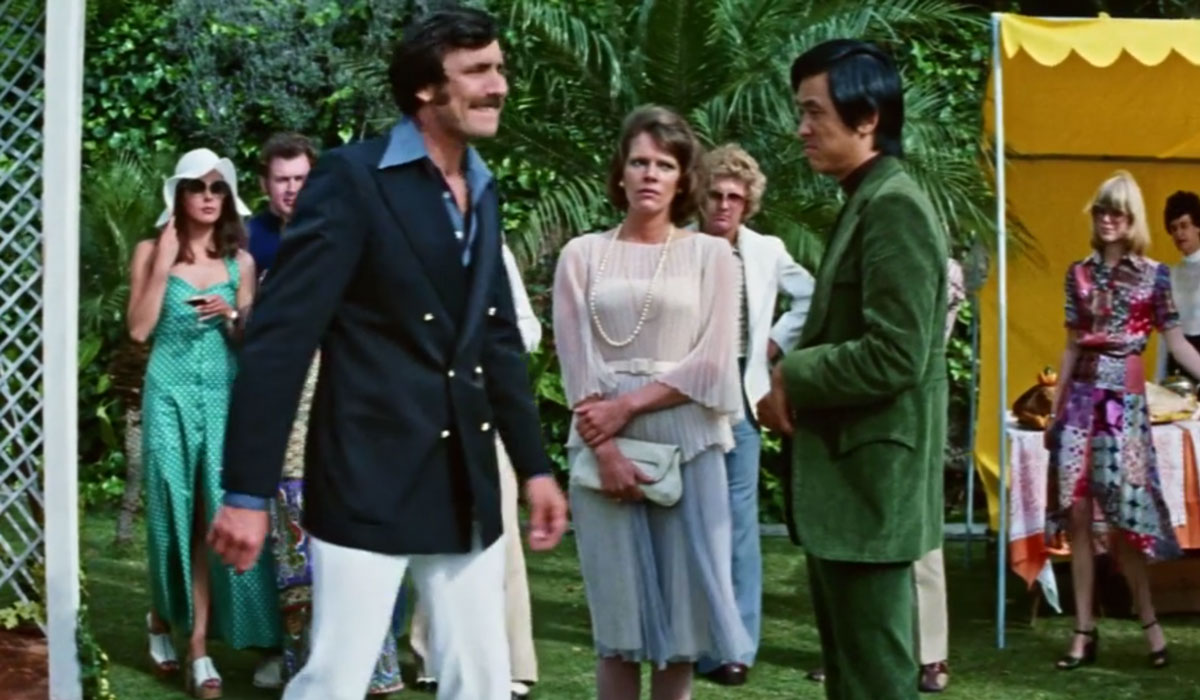 I wanted to share some screen grabs of Inspector Fang Sing Leng’s green corduroy fight suit. You can see from the photo above it’s brimming with 70s signatures such as the curved western patch pockets on the skirt. 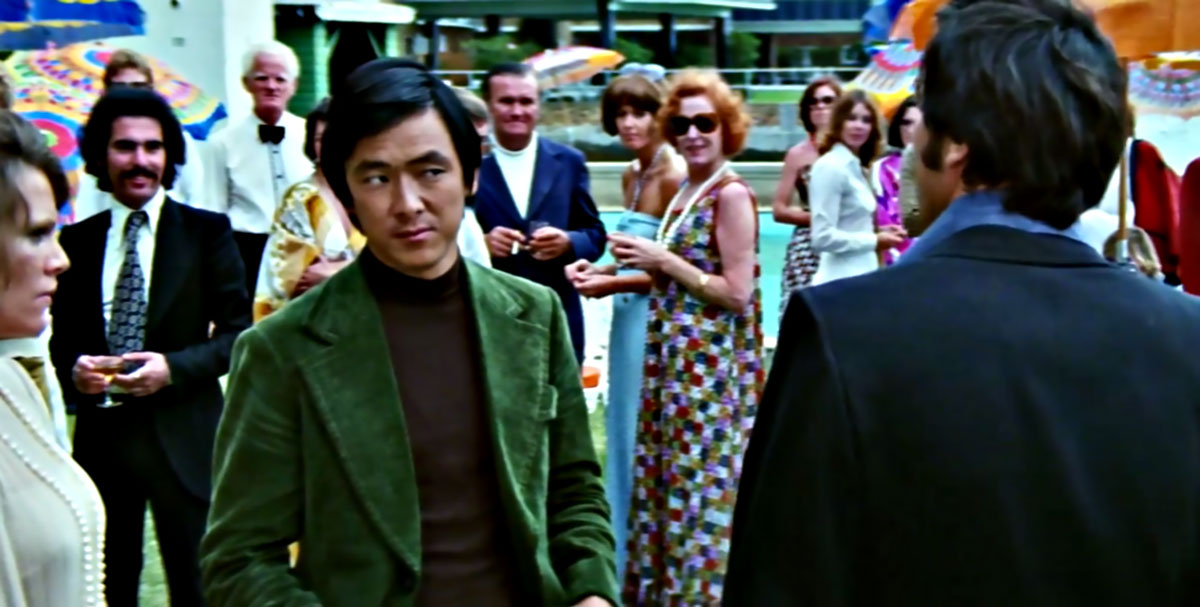 The jacket is traditionally long for the era with edge stitching that frame the notch lapels. The lapels are so wide it all but completely covers the patch pocket on the breast.

The suit jacket is half belted and you can see at the back that the single vent rides all the way to the top. Jimmy Wang Yu who played the detective needed the jacket to move when he moved, and this long vent facilitated that. 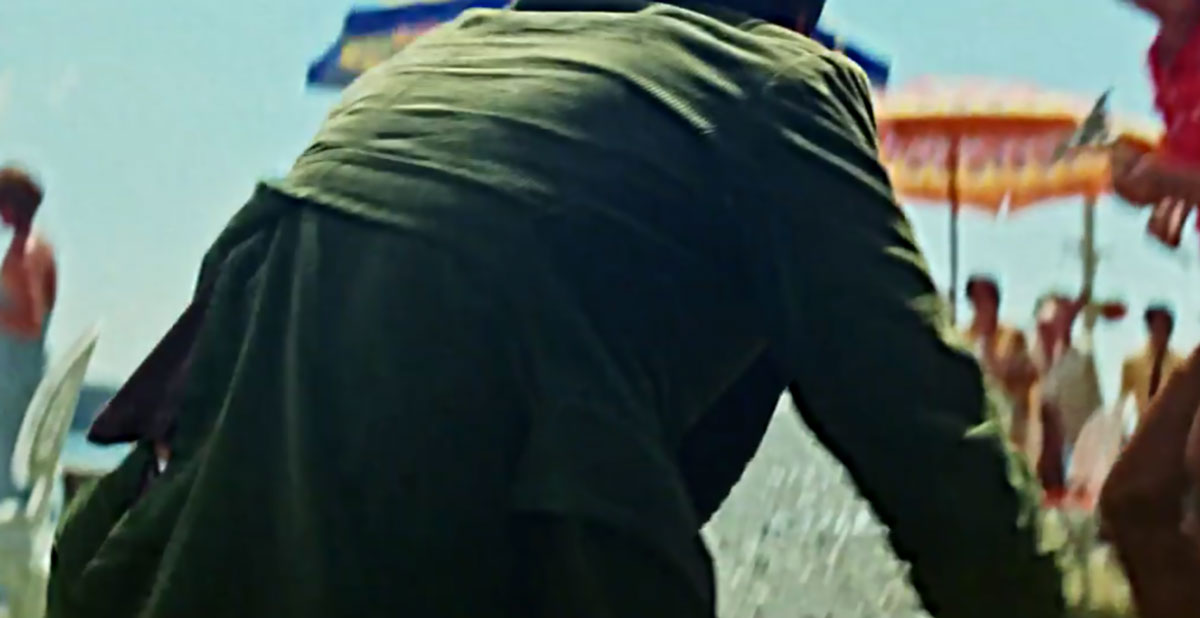 The jacket is structured and in brief flashes when the jacket skirt is inverted, you can glimpse a light green paisley.

The belt is a brown leather with a brass buckle that’s embossed with an insignia. (Unsure of the brand). The plum coloured mock turtle neck really compliments Wang Yu’s complexion.

Always likes to make an entrance

This corduroy suit is a medium-thick corduroy. If you’re looking for a Bond comparison it appears considerably thicker than Daniel Craig’s Pinwale Matera suit by Massimo Albo.

I love the entrance to this suit, I tweeted a short video below. This is how I want to turn up to meetings in 2021.

There is a scene in this film when George Lazenby, who plays Jack Wilton catches fire. He is clearly struggling to get his enflamed jacket off and it was no surprise to read later that Lazenby suffered minor burns after performing the stunts himself. 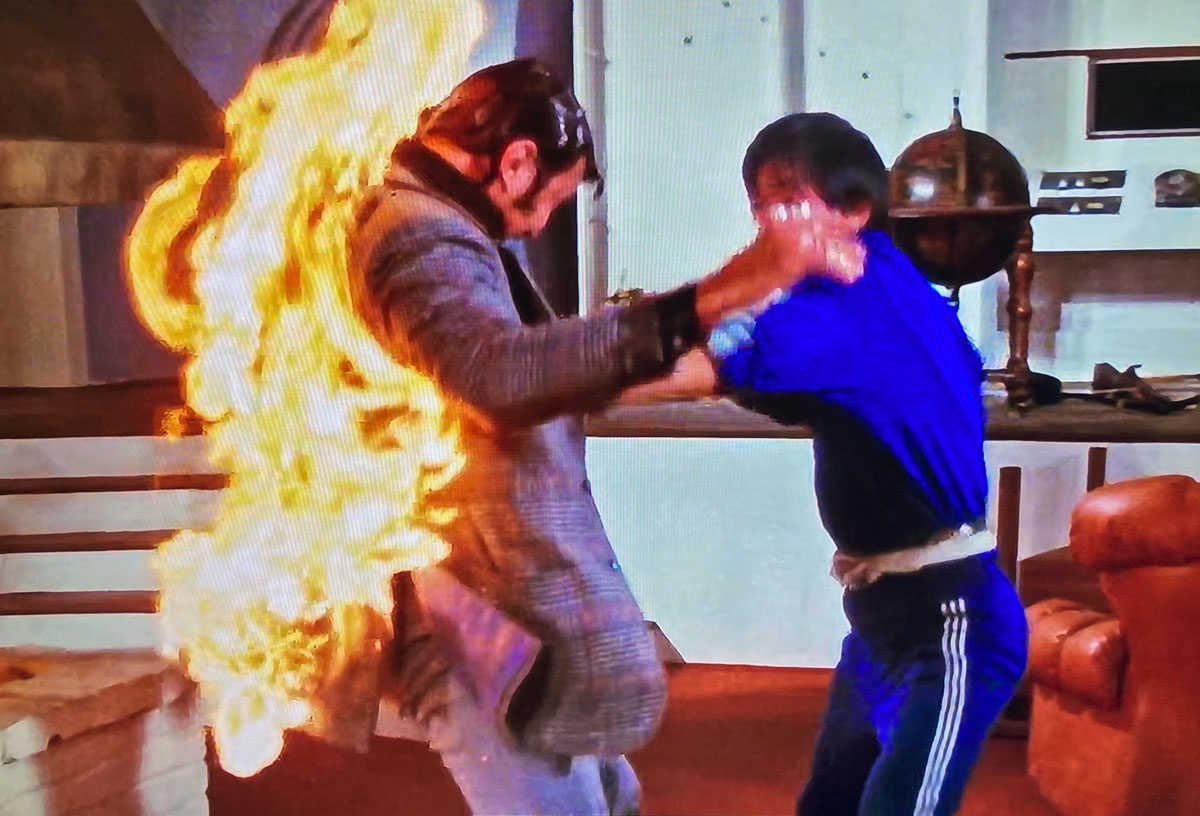 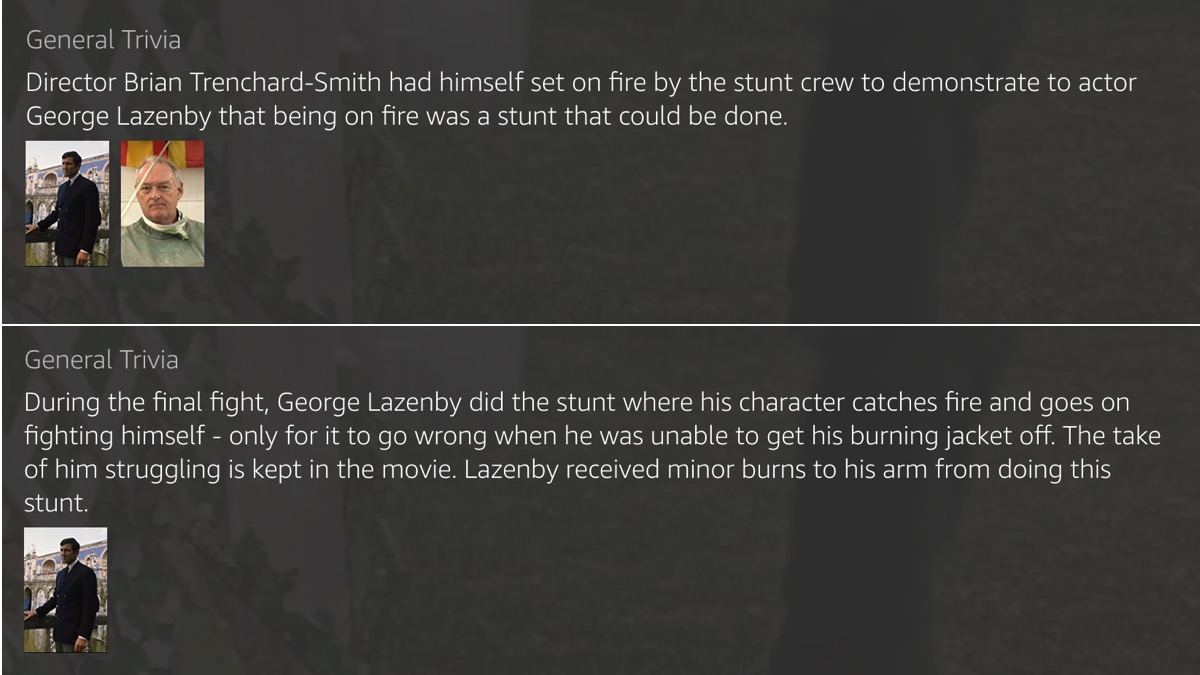 Lazenby’s shirt collars in this film had a bigger wingspan than some of the hang gliders that are replete throughout this film. Bruce Finlayson and Sheng-Hsi Chu are the costume designers credited for the film. 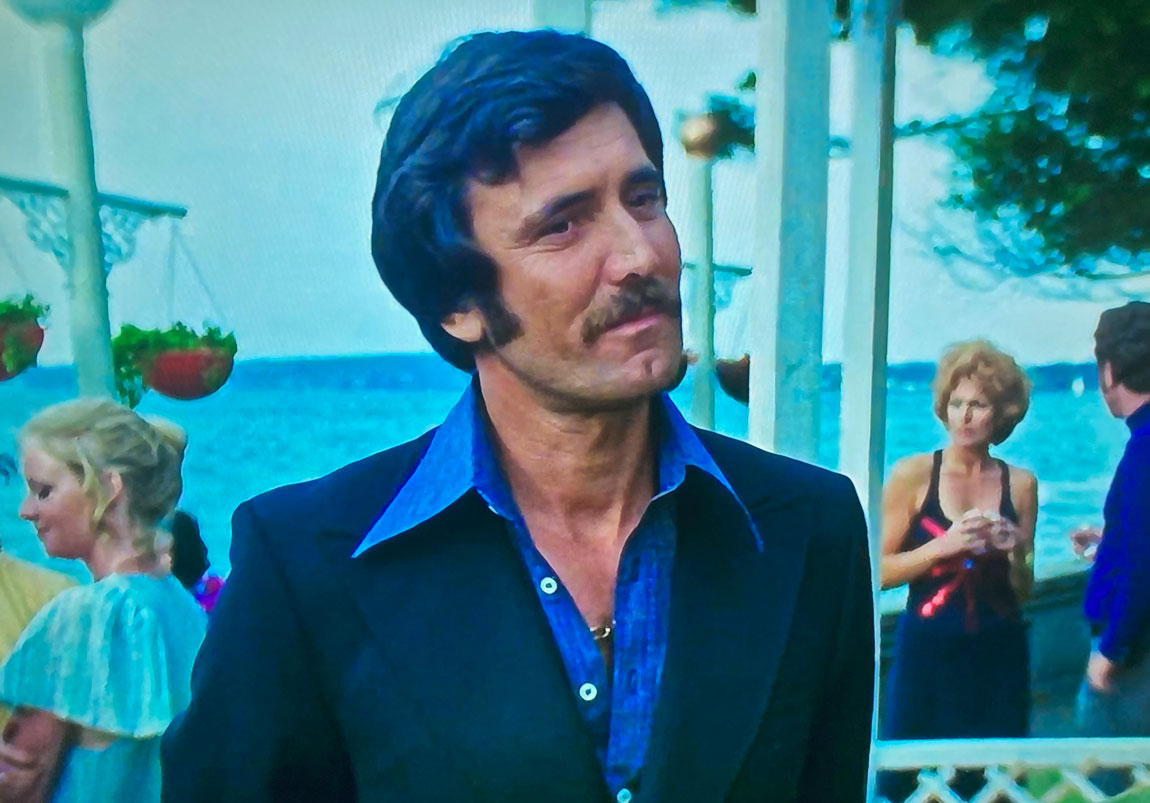 Meeting George Lazenby at the BFI 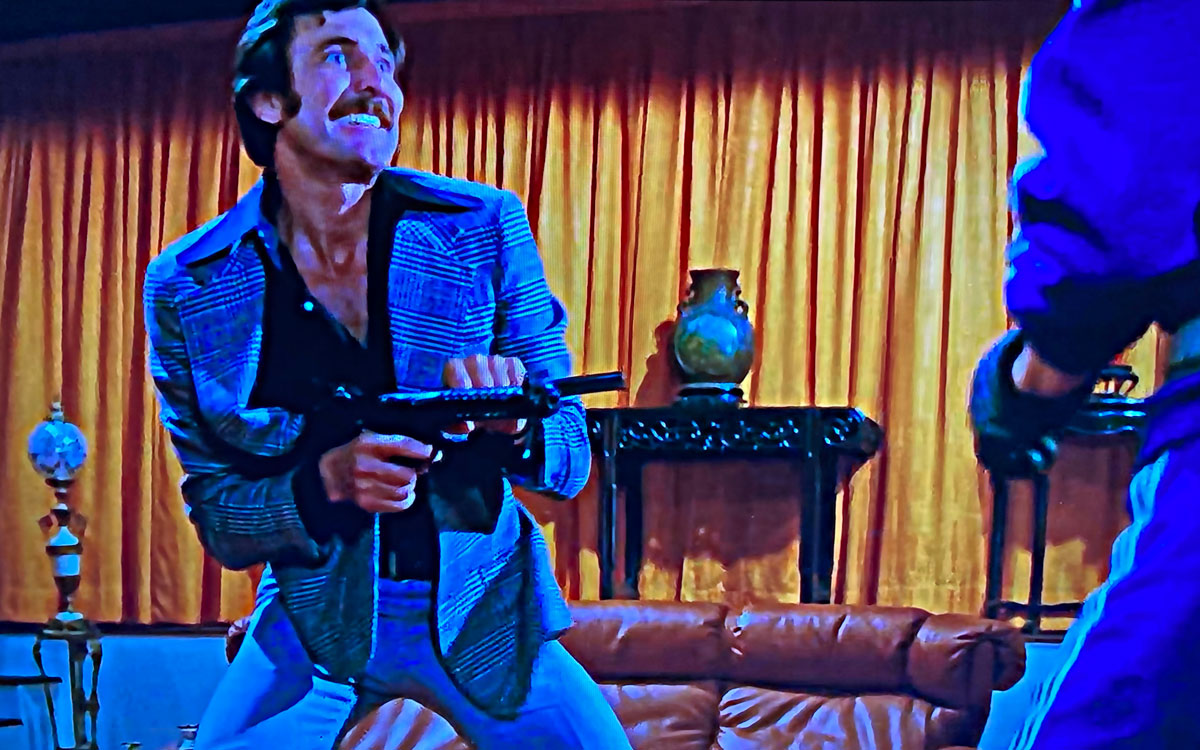 If you’re a fan of George Lazenby I would thoroughly recommend watching Becoming Bond, which we have studied in a previous podcast. The Man From Hong Kong is now available to buy on Blu Ray.