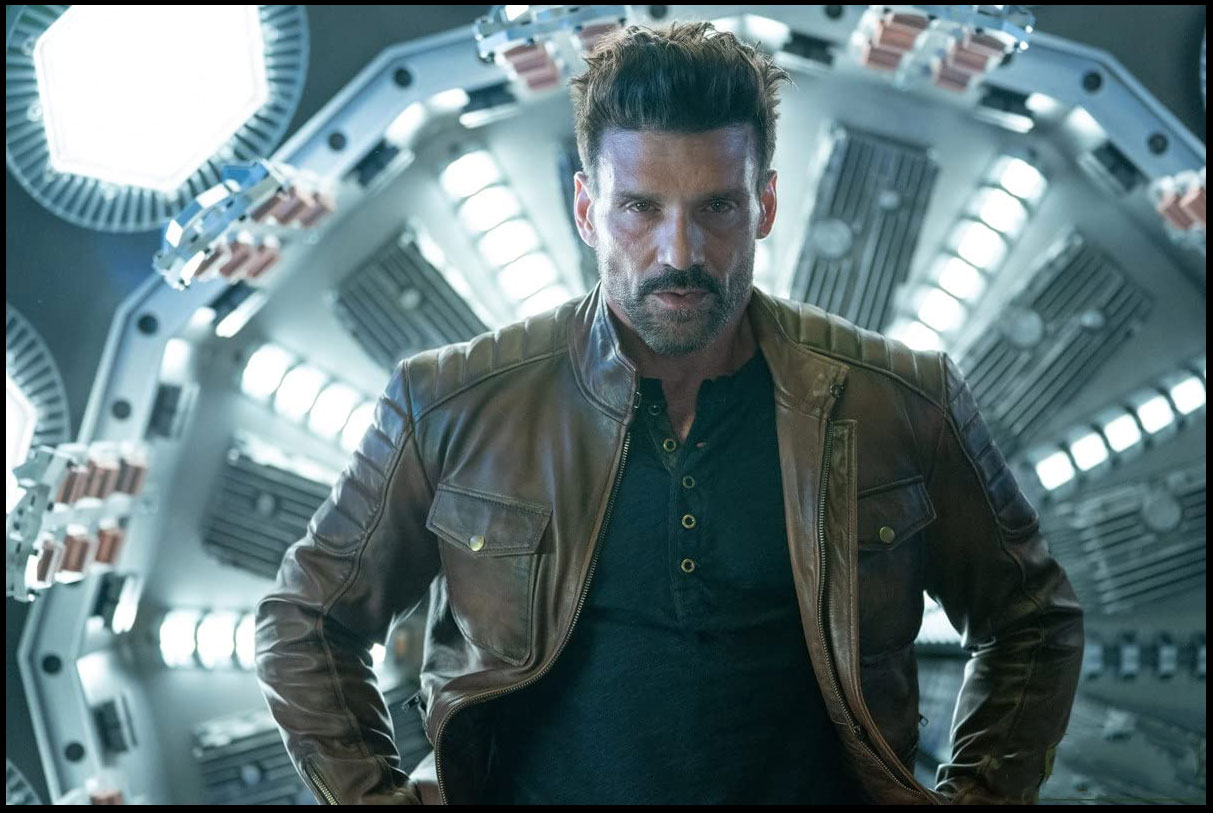 Every now and then a jacket will appear in a movie that will burgeon on becoming as iconic as the movie itself. Think the red leather thrift shop find jacket in Fight Club, the gothic leather trench coat in The Matrix, etc.

When watching Boss Level, starring Frank Grillo and Mel Gibson, directed by Joe Carnahan, I was mesmerised by this jacket (worn by Grillo’s character Roy Pulver) and couldn’t quite get over how cool and different it looked. I had to reach out to the film’s costume designer Jayna Mansbridge on instagram and find out more. Amazingly she replied straight away and after a short correspondence agreed to an E-Interview. Thank you Jayna. This is actually one of favourite interviews I’ve posted on the blog. (Which is available to watch currently on Amazon Prime and Blu Ray). 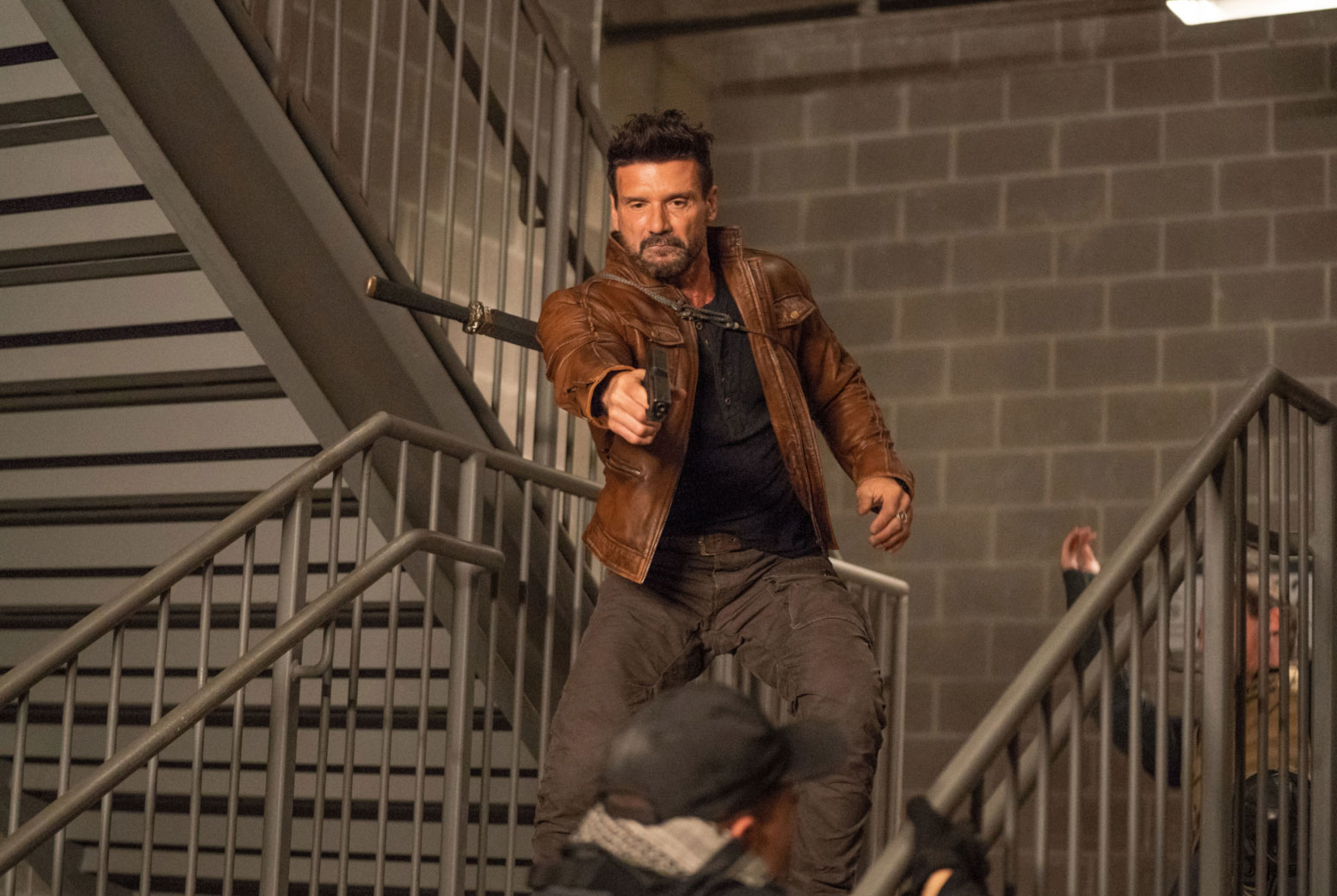 PB – (Me) I couldn’t help notice on your filmography that you’ve worked with Frank Grillo before on Point Blank. Did he put you forward for the role as Costume Designer for Boss Level or just coincidence?

JM – (Jayna Mansbridge) Great observation! I have actually worked with Frank 4 times, 3 as an actor. I first worked with Frank (as a producer) and Joe Carnahan (Boss Level director) on a film called El Chicano. Shortly after we wrapped that, they asked me to come and do the costume design for Boss Level. Since then, we have also done Point Blank (it came out before Boss Level, but we shot Boss Level first) and Copshop (which just hit theatres this past fall with Frank Grillo and Gerard Butler). I love working with these guys – big ideas and wonderful collaborators. 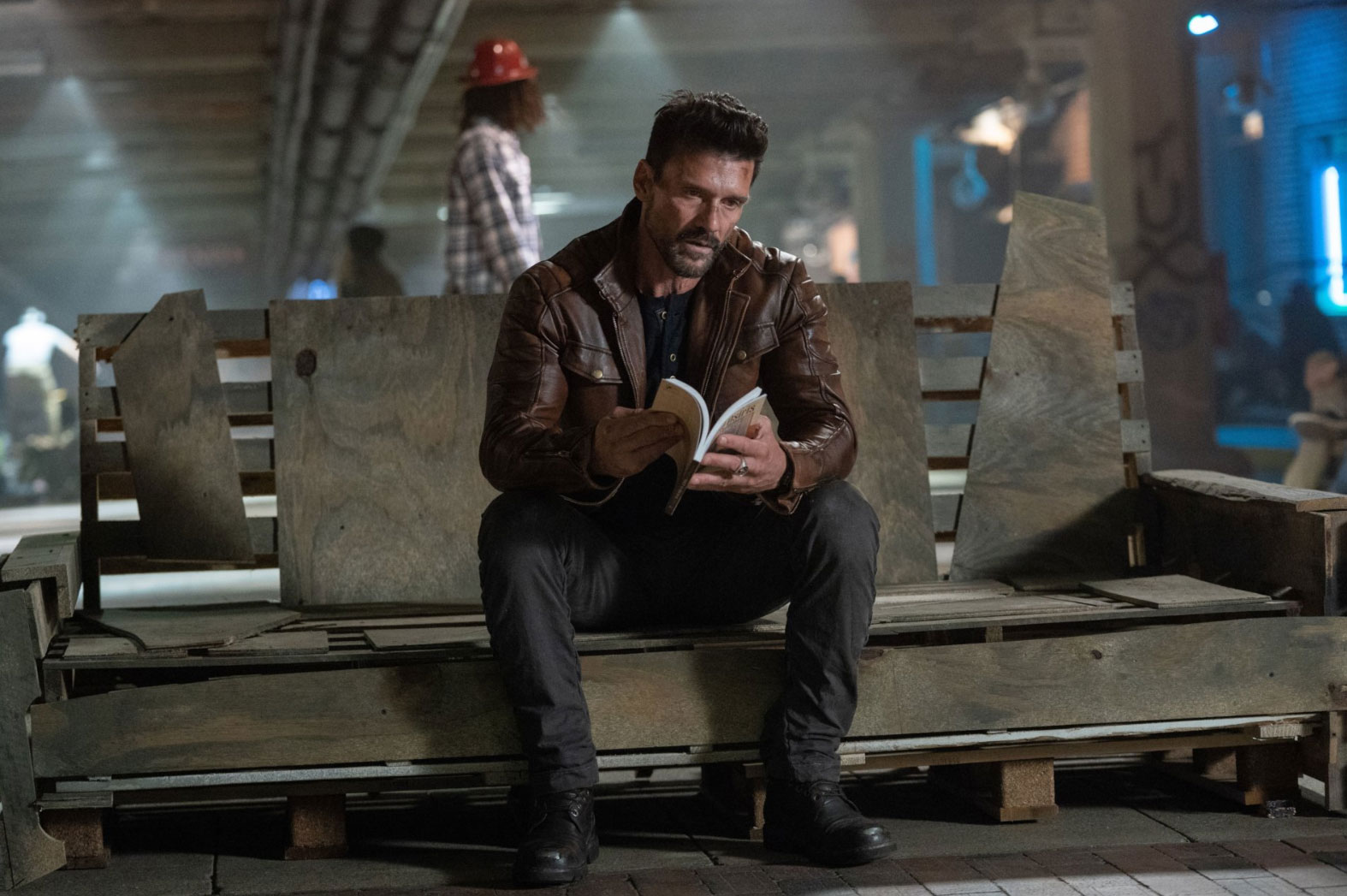 PB – (Me) What were the design inspirations behind the character Roy played by Frank Grillo?

JM – Joe Carnahan and I had a lot of discussions about the character of Roy and really dove into his back story. We wanted Roy to feel both aspirational, but authentic and real.  There’s a very sweet moment in the film when Roy’s son Joe asks him if he’s like the guy from Taken “with a particular set of skills”. Roy laughs and says sort of, but that Liam Neeson is a fake tough guy, and he’s the real deal. When designing the character, I certainly kept this quote in mind. Roy’s paramilitary training and life experiences really are at the core of who he is.

His costumes were intended to be his uniform for his day to day – this guy doesn’t have an extensive closet.

His look was inspired by classic movie action heroes (Harrison Ford in Indiana Jones for example) and of course video games, like Uncharted, Fry Cry and even Red Dead Redemption. I treated the whole process of creating Roy’s hero look like the building a badass ex-military avatar in a video game. I sort of scrolled through the possibilities in my mind, much like selecting clothing and armour for a video game character, and landed on this look in consultation with Frank and Joe.

The other characters in the film, Smiley, Guan Yin, Kaboom etc. were also conceptualized in this way. 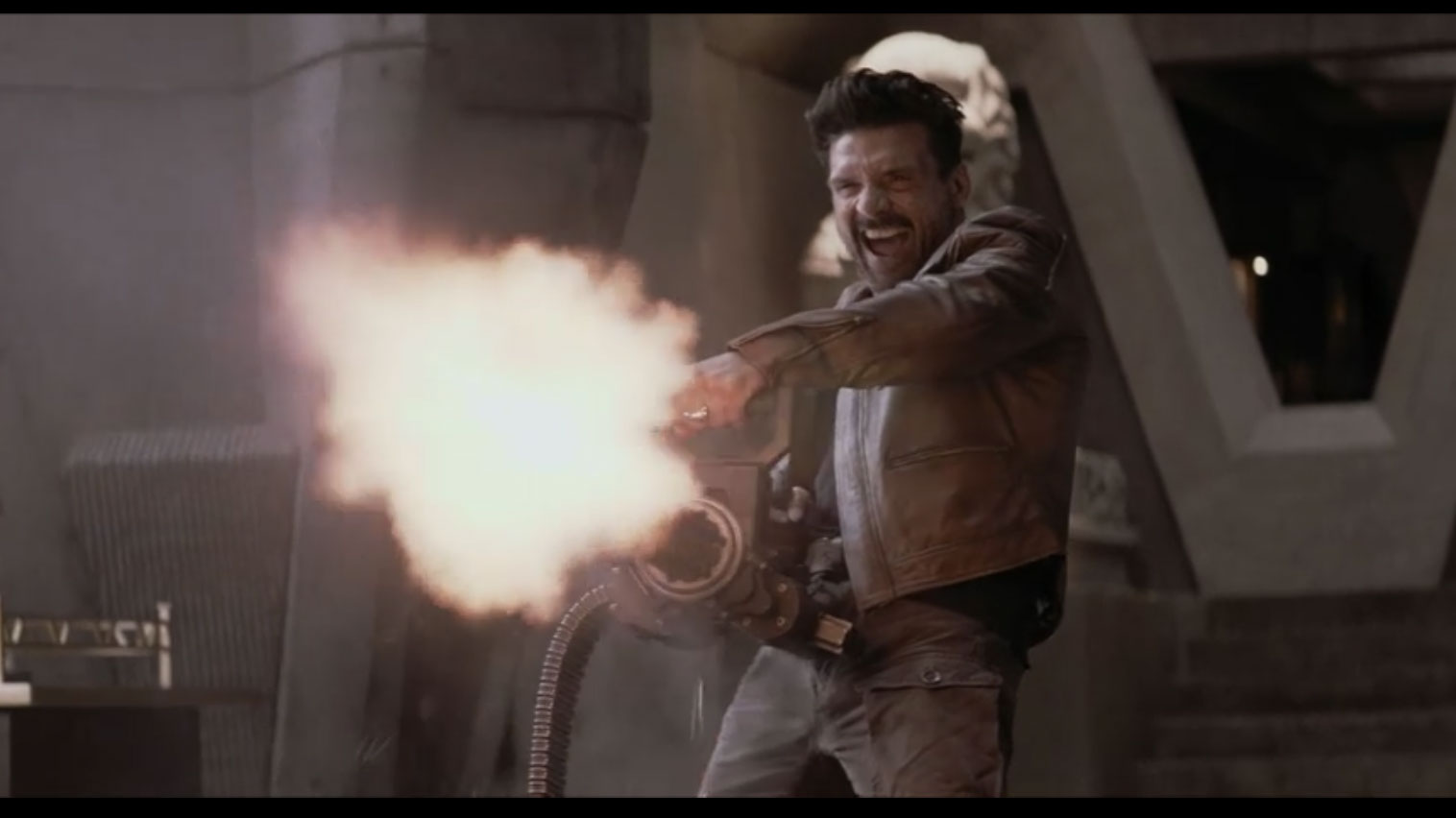 PB – Can you remember what the early conversations were like with the production team, Frank and the director? Was there a shared vision?

JM – From the get-go Frank, Joe and I were very much on the same page in terms of Roy’s vibe and look. I also consulted a lot with the Director of Photography and Production Designer to make sure that the costume would pop on screen. We added a lot of ageing and highlighting to his costume to give it that video game look and we camera tested it to make sure the jacket specifically did what we all wanted it to do in the light.

PB – I have to know more about the leather jacket that Frank wears for ¾ of the film. The impression I got was that his look very much encapsulated that of a modern day resistance fighter. First off how do you describe it? And did Frank have any input into the designs at all?

JM – I would describe this jacket as a tailored motorcycle jacket with a military edge. I designed and made this jacket in three different leathers as samples – a dark brown leather, a sort of medium distressed brown leather, and then this one –  warm medium brown calf skin. Immediately Frank was drawn to this jacket.

In fact, for Frank’s first fitting in addition to making these three jacket samples I also brought in about 20 other options from brands including RRL, Belstaff, Varvatos, and J. Lindeburg for Frank to try.

All of the jackets were hung together on the rolling racks – he came into the room with Joe, immediately walked over and picked up and put on the calfskin jacket we made. It was the one. My original design and sample had another closure (buckle) at the waist and in consultation with Frank we decided to lose that. We also decided to recut the pants he wears in the film to alter the shape through the seat and added a panel (gusset) at the bottom for a wider entry for the boots. Since then, Frank and I have done the same alterations to several pairs of his personal jeans! We have his fit down to a science. 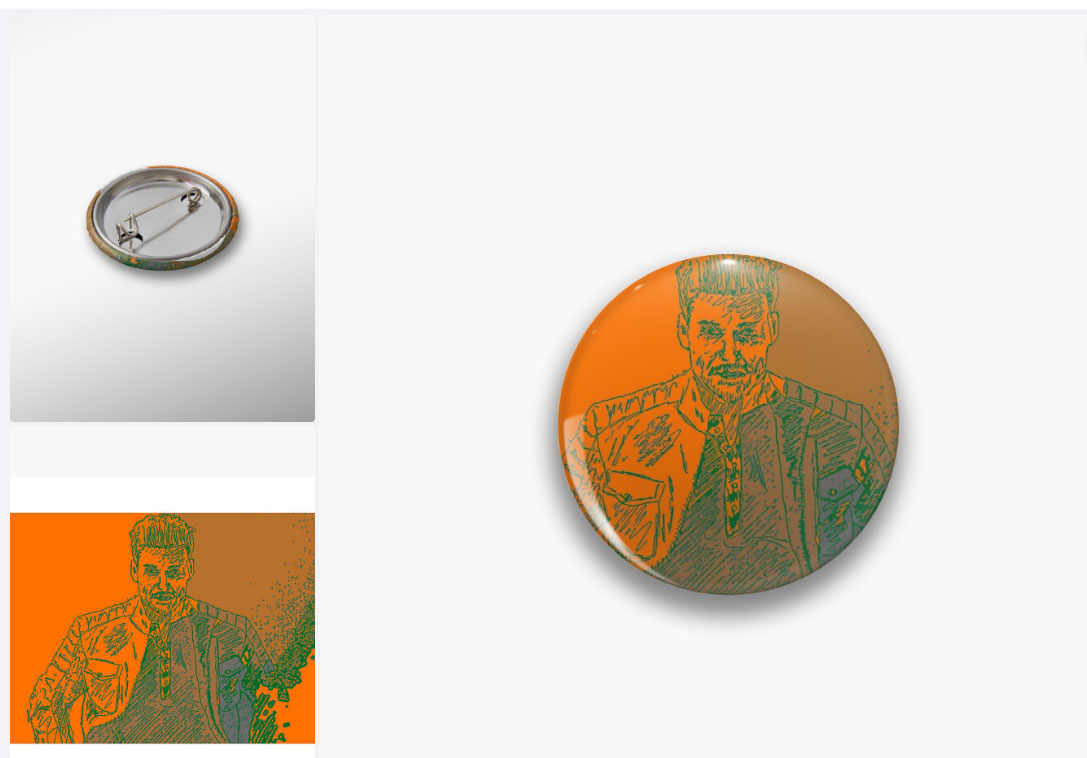 Where is the jacket now?

PB – You mentioned to me in our correspondence that 36 were made. Do all these go back into archive? Do the cast get to keep any?

JM – One thing about Frank and Joe is that they like to do everything practically on camera rather than doing it in post production! We had to make 36 of the jackets because Roy dies so many times. Frank does a lot of his own stunts, so we had to have extra ones in case they were damaged unintentionally as well. Frank also had put on a ton of muscle for the role.

We had jackets for him to wear at the beginning of production, and then we had to have slightly smaller jackets for him for later in the schedule. He was so physical during filming he unintentionally was cutting and losing weight. There were also several stunt men, some jumped off buildings, some lit on fire, so we needed a lot of jackets! The key was it always had to look the same at the beginning of each attempt. We also had about 40 pairs of pants and 90 of the Henleys. Most of the jacket were destroyed and archived, I think 3 or 4 survived, one of which is with Frank. 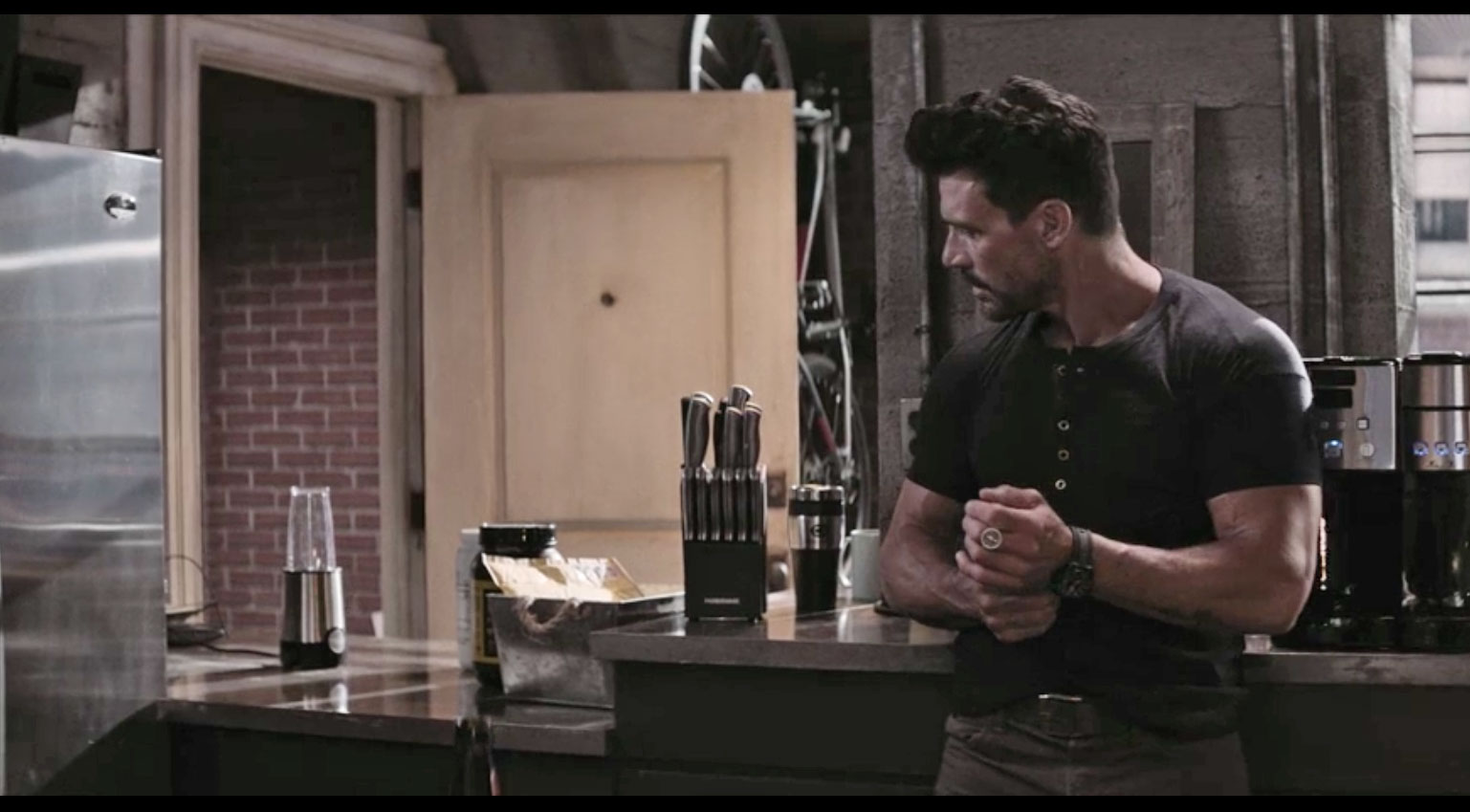 PB – Frank also wears a navy short sleeve Henley throughout. Were these specially made also along with his cargo pants?

JM – The navy henley was made by Sheehan & Co., an LA-based clothing brand. Daniel (the designer) worked with us to do a custom dye lot for us (a darker navy) and they were all made in Los Angeles. He makes the sexiest t shirts and henleys. The cargo pants, originally came from G Star, were dyed a custom colour, recut, pockets moved, gusset added. His boots were Diesel. 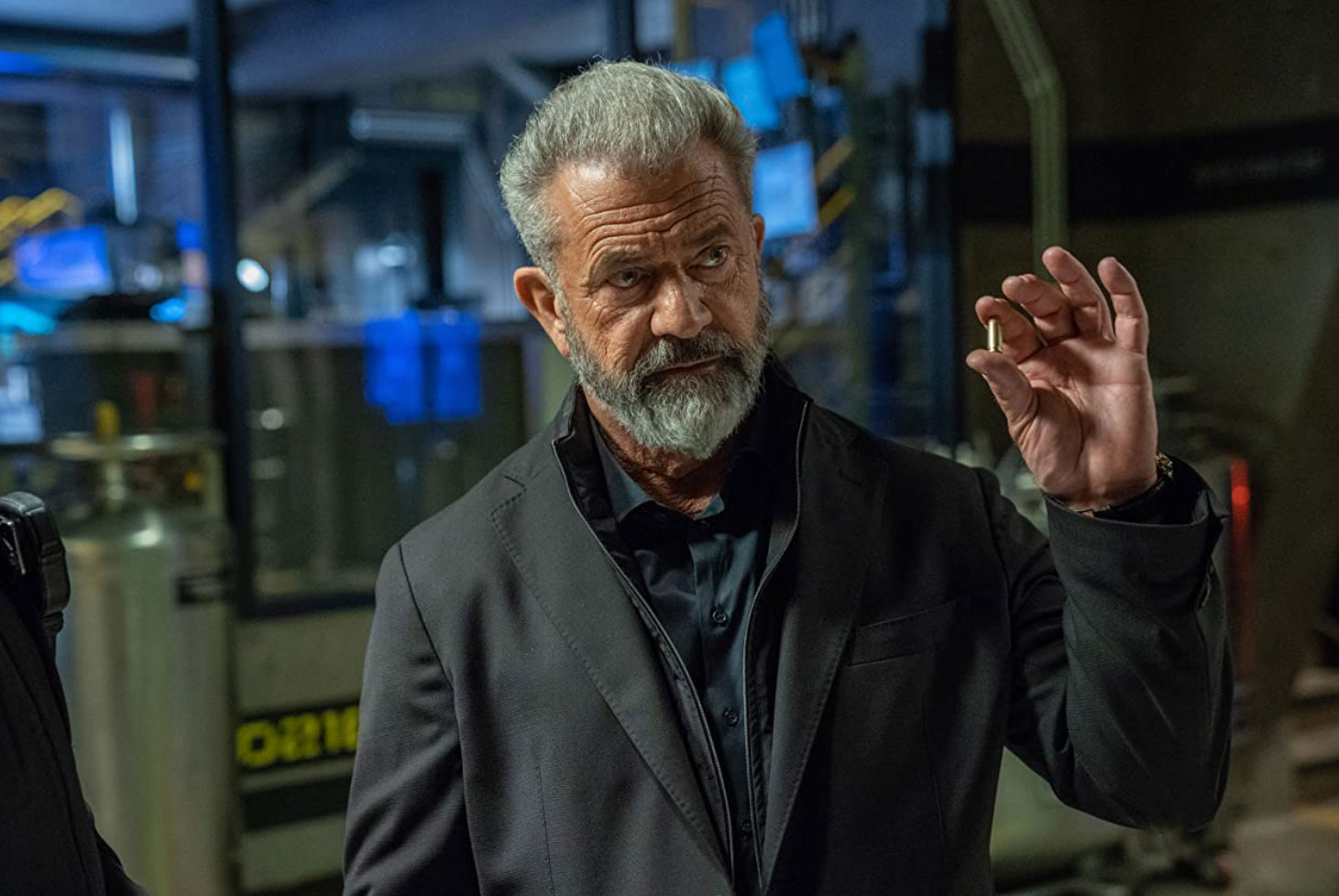 PB – Could you also touch on the suit and designs for Mel Gibson’s character Colonel Clive Ventor. What were the ideas behind that look and were his suits specially made also?

JM – Colonel Clive Ventor – this guy is your classic bad guy, who doesn’t really get his hands dirty – that’s what Brett (Will Sasso) is for, along with the rest of his assassins. I really wanted him to look polished and intentional, with the slightest sprinkling of Sci-fi. I think that’s why I was immediately drawn to this specific Corneliani jacket with zippered insert. The pants were Hugo Boss and the shirt is the most gorgeous midnight blue Armani.

Huge thanks to Jayna Mansbridge once again for this amazing and fascinating interview. Don’t forget to check out her website here.