Fight Club – All Style, All Substance, That Robe, That Red Jacket & Brands Revealed | #147

I think it’s probably the most important film of Generation X pre-911. 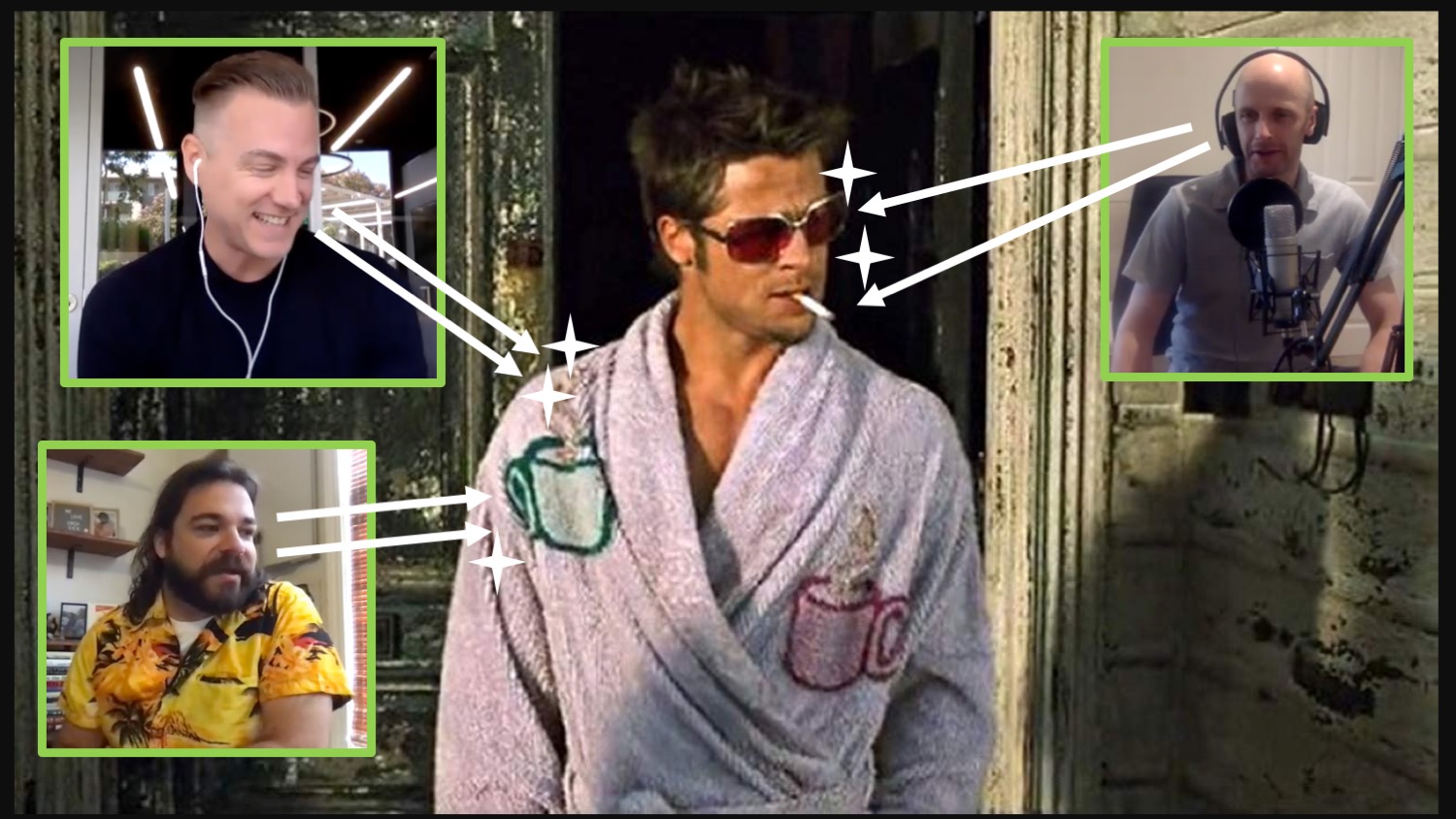 In this episode we are taking a closer look at the costumes of Fight Club. Directed by David Fincher, based on the book by Chuck Palahniuk starring Brad Pitt & Edward Norton. The Costume Designer was Michael Kaplan his filmography includes, Mission Impossible Ghost Protocol, The Game, and Bladerunner. Can we learn anything from Tyler Durden’s look and how would you go about getting it? What pieces are still available to buy and why are these pieces so unique?

Differences to the book (spoilers)

It was shorter than I thought. More compressed. The film is over 2 hours and 20 mins, the book is audio formed between 5-6 so it felt like an abridged version of the film in some ways. The ending was a bit different in the book, Tyler blows up his boss’s office and kills him. But that’s not in the film. He does shoot himself in the head – but it’s left a bit open in the end. In the book he has doctors telling him, you’ll be back on your feet in no time Mr Durden. So it feels like he hasn’t lost his alter ego. 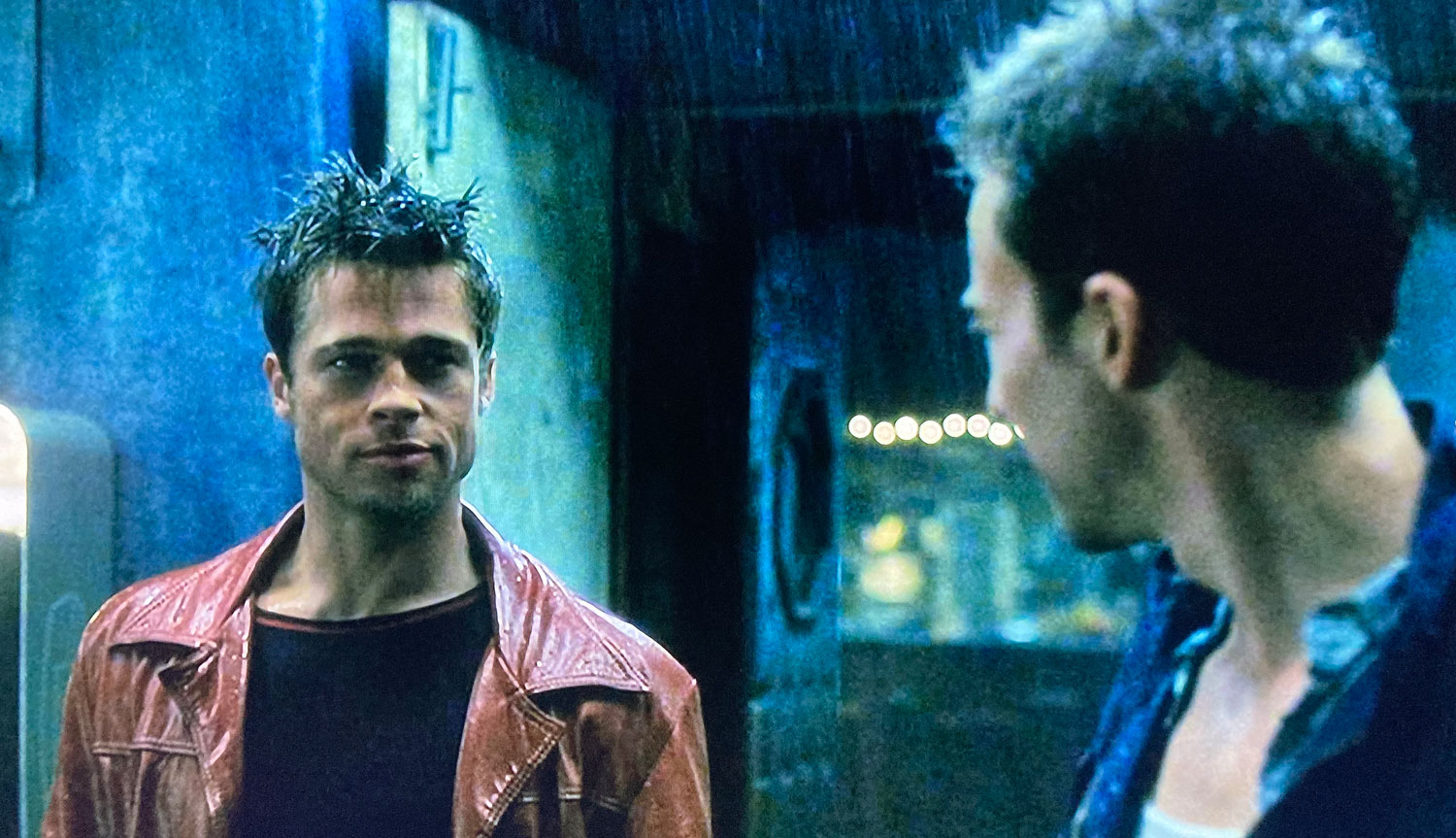 According to a video by Ragon Productions all the vintage pieces were sourced in thrift shops all over California By Michael Kaplan. They are highly rare highly sought after. Some vintage pieces were one offs. If they needed extras duplicates were made. A brand called Max Cady clothing made some replicas, the track pants etc. The pants (retro joggers) that Pitt wore when fighting Norton for the first time outside the bar was made by a brand called VERSO. 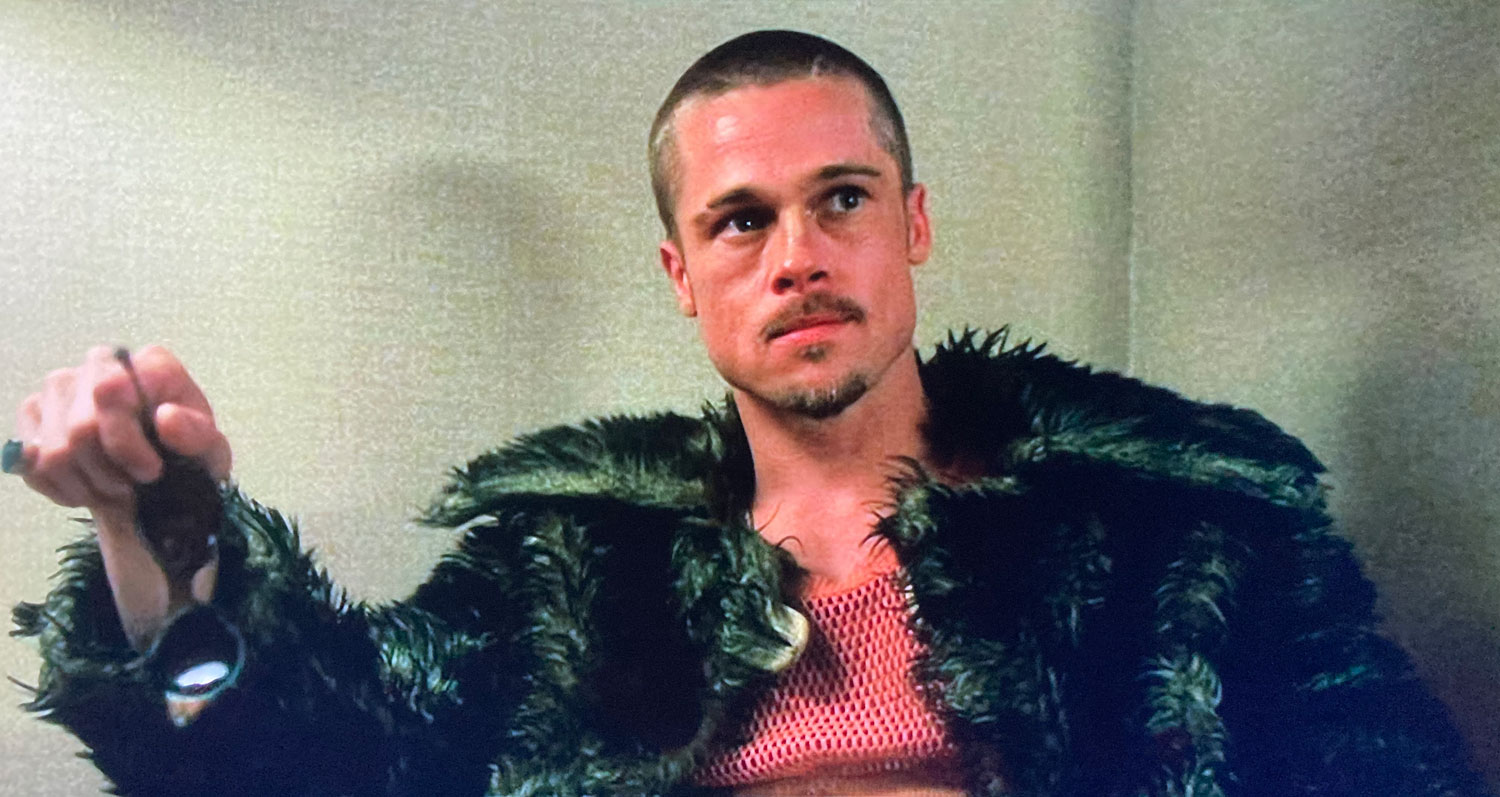 Style described in the Book

The book only mentions the project mayhem uniform, heavy black boots, black socks etc & some various regimental ties. The flamboyant and conspicuous costumes that Kaplan envisaged for Tyler Durden are at times as violent as the fights themselves.The uniform needed to get into Fight Club boot camp:

The ties are referred to in both the film and the book. Ed Norton Character has one red tie with blue stripes and one blue tie with red stripes. These are regimental ties and not club tie stripes. And one solid red tie. 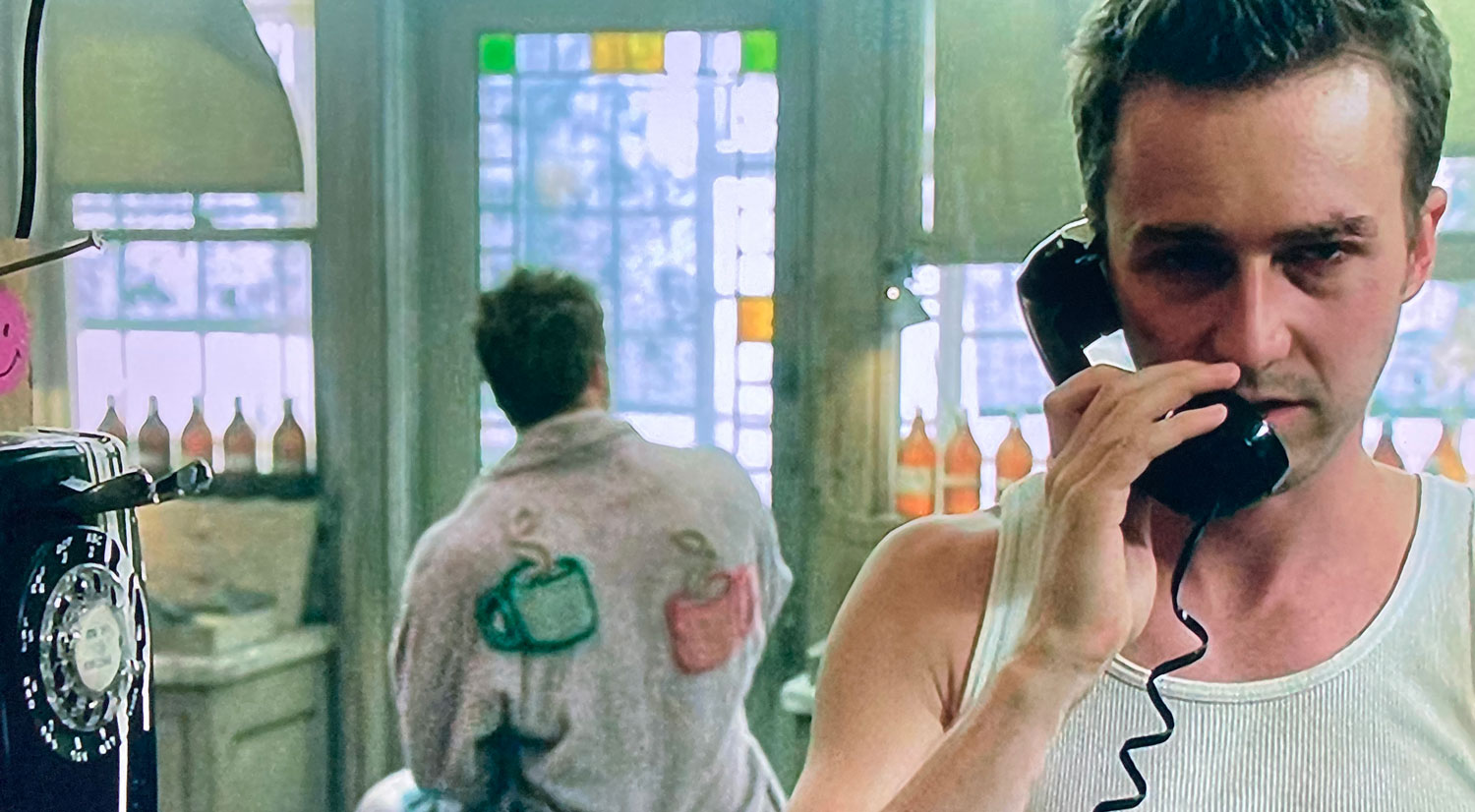 I reached out to the Canyon Group who made the robe for Tyler Durden. I wanted to know if the robe was still as popular today for them. They were kind enough to respond below.

The lilac Coffee Talk robe is the most popular of all Canyon Group chenille robe designs. Unfortunately, because the pandemic has significantly affected Canyon Group’s supply chain of raw materials, we are not able to provide an accurate number of annual sales.

The original was sold at auction, 10-15k and you can still buy the robe through the Canyon Group website for $222 currently.

Unbelievably a bar of soap from the film also sold at a recent Prop Store Auction for 2,500 GBP. 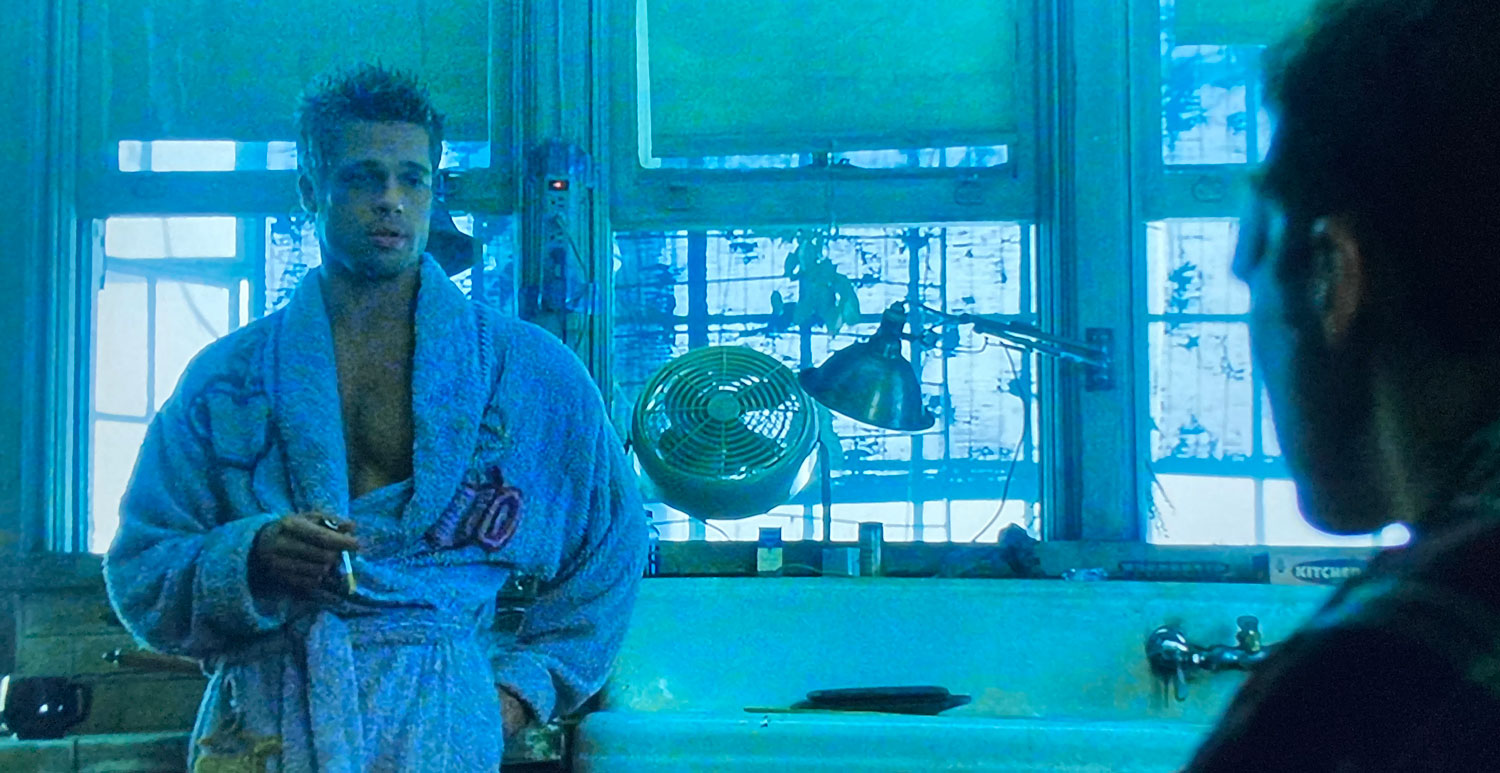 The famous red jacket from Fight Club was custom made and sold at auction for 32,500k. There are a couple of versions and confusion around this story. The red leisure jacket that Tyler Durden wears when he meets Edward Norton on the plane is not the same one he wears when he later meets him in the bar. 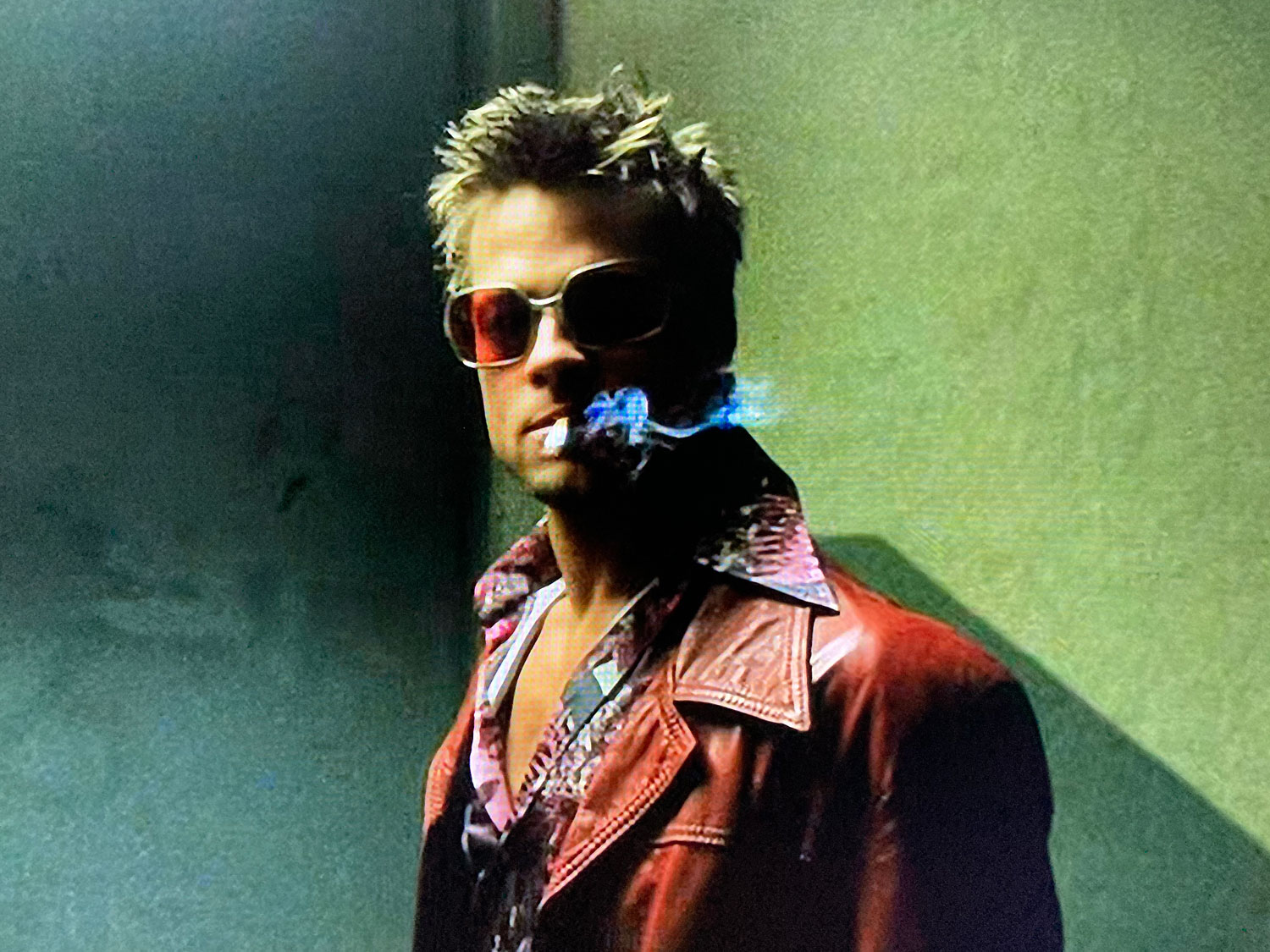 Other sources say the jacket on screen was personally picked up by Brad Pitt and Fight Club costume designer Michael Kaplan from a thrift store to be used in the movie. It’s more likely the ‘plane jacket’ is the thrift store find and the rust leather jacket worn by Durden when he re enters the life of Edward Norton’s character was custom made. It’s also likely that duplicates were made due to the amount of screen time it had.

(Please email me with corrections if I’m wrong). Edward Norton wore it during a photo session/interview for the magazine ‘The Face’. The jacket was later auctioned off back in 2001 by 20th Century Fox to promote the movie. 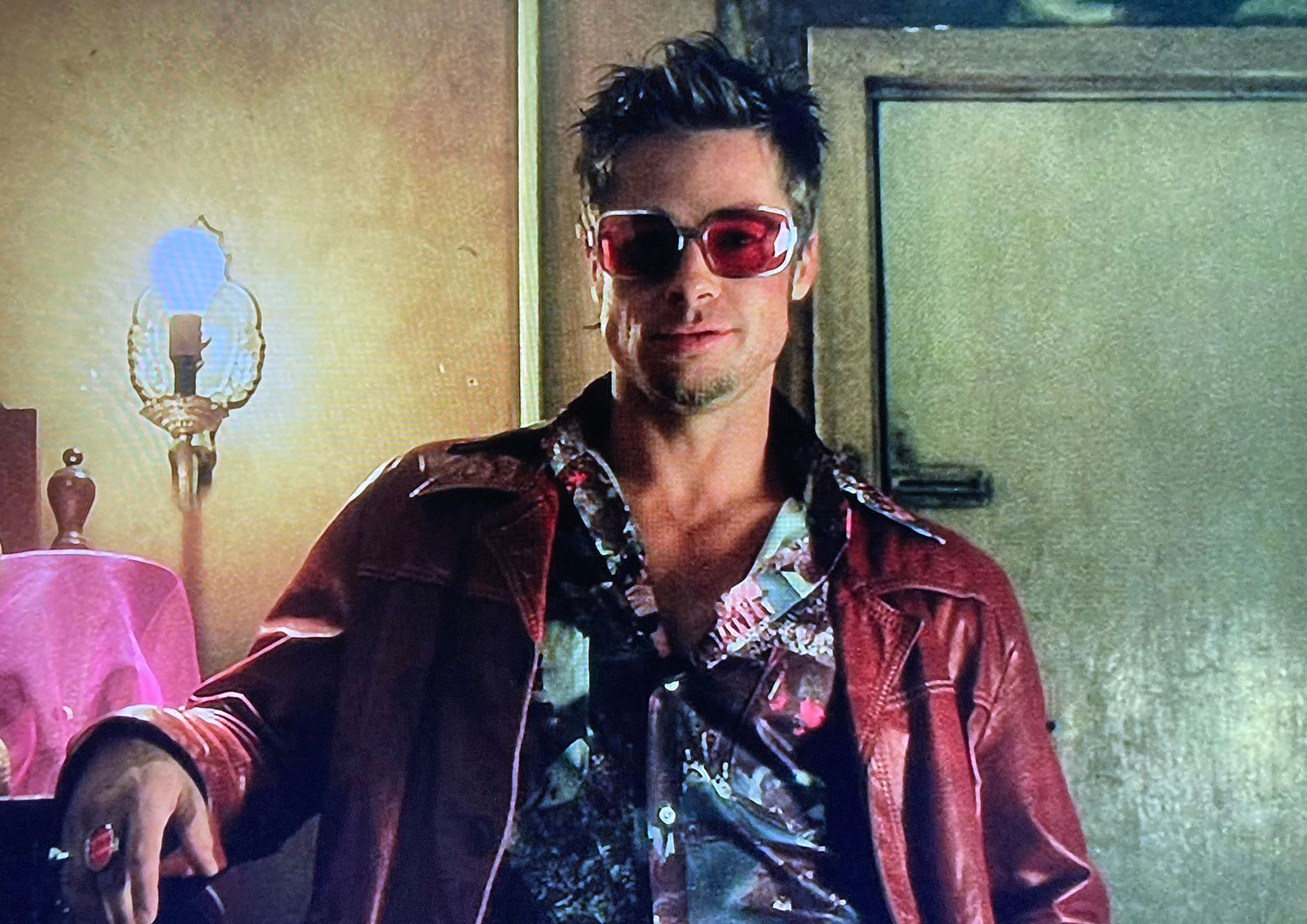 I’m joined by John Williams of James Bond Radio and Nick Guzan from Bamf Style. (Podcast available to listen on iTunes, Stitcher or Spotify or in the player below).

Nick has this to say about the first time he saw Fight Club,

It was a whiplash experience I was so I think it was the first time I’d ever had such, you know, some version of my expectations for you know, a movie and it you know, just fascinating to see how chaotically Tyler Durden sense of dress, really shows what a what a new agent of chaos he is into this otherwise pretty bland world, right?

John Williams had this to say,

I’m amazed at how comfortable Brad Pitt is in these clothes. And how incredible he looks. I was talking to a trainer the other day and I said what’s the photo that most guys bring you  and say, this is what I want to look like? And he said hands down Brad Pitt Fight Club. He’s just in such amazing shape. I’m fascinated by the fact that he shirts are always about four inches too short.

He just pulls it off. The red Miles Davis’ sunglasses you know he’s got the coolest hair in the world and then he shaves it unless you’ve ever as a man taken a number one and gone over your head. It’s one of the greatest feelings in the world. I love that vintage clothing store fashion. I can’t wear it, it’s the smell or something. You know?

Nick has also written extensively on the clothes of Fight Club and you can read more of those articles on his site here. The movie Fight Club is available to buy on Blu Ray.